Prescribing errors are common. Available data on these errors, particularly in family community centers in Saudi Arabia, presents a problem that must be addressed. The aim of this study is to investigate the rate and types of prescribing errors at an ambulatory care setting in Riyadh, Saudi Arabia. Data were collected to cover a 12-month period. A prospective review of hand-written prescriptions was made by a trained pharmacist to identify any potential errors therein. The main outcome measure was quantifiable rate and types of prescribing errors. A total of 177,406 prescriptions were scanned wherein 481 (0.27%) prescriptions consisted of at least one error for a total of 510 (0.09%) prescribing errors during the 12-month period of the study. The most common errors were: (1) inappropriate dosage and (2) inappropriate treatment. The uncommon errors consisted of: (1) incorrect drug, (2) incorrect strength, and (3) incorrect duration. All errors were corrected before the prescription reached the corresponding patient. Most errors were made during early morning hours. Lastly, the frequency of errors was highest with prescriptions relating to antidiabetics. Although the rate of prescribing errors in the subject family community center was not frequent, continuous education and monitoring is needed to limit such errors.

This study was conducted at a family and community medicine center considered as a primary care facility. It consists of 15 different types of clinics (Table 1) that continuously provide a comprehensive range of professional medical services located in Riyadh, Saudi Arabia. The prescriptions used in this study are all paper-based. The prescriptions were received and processed by the outpatient pharmacy and examined by at least two pharmacists. During this process, if a pharmacist identifies a prescribing error, it is subsequently reported then double checked by a trained or clinical pharmacist. Data were collected from January to December 2018 (12-month period) following the approval from the Institutional Review Board. A prescribing error, in this study, is defined as any error identified in the process of dispensing medications through a prescription that might negatively interfere with the treatment of a patient. The 2001 National Coordinating Council for Medication Error Reporting and Prevention (NCCMERP) standards were utilized for error classification. 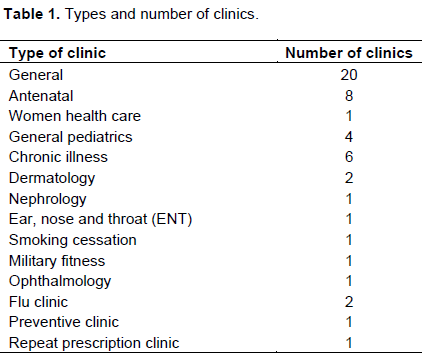 A prospective, record-based review of prescriptions for the detection of errors was made. A medication error reporting form was used to document the prescription errors. None of the patients’ identifiable information (names and addresses) on prescriptions was recorded. Medication error reports were initiated by a pharmacist and, subsequently, reviewed by the quality control department according to NCCMERP. The detailed information in the patients’ electronic medical profile relating to their characteristics, demographics, comorbidities, medications, allergies, and their need for monitoring were all reviewed. A communication form was used to specify the type of error. The  said form was then attached to the prescription and returned to the prescriber for reevaluation and rectification of the error. The data were uploaded via the MicrosoftÒ ExcelÒ 2017 wherein categorical variables were described using frequencies and percentages, while continuous variables were expressed as means or medians.

Ethical approval was obtained from the Research Ethics Committee at the Scientific Research Center in Prince Sultan Military Medical City and correspondingly granted the number HP-01-R079. 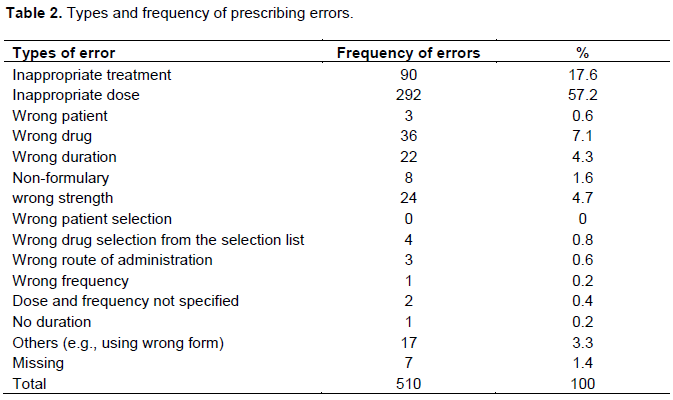 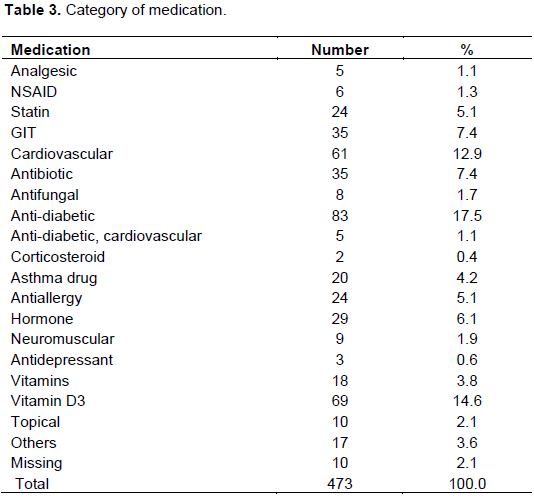 This study identified the incidence of prescribing error in a community family care center. The findings of the study show a low percentage (0.09%) prescribing errors. Moreover, the said errors were of the less harmful type. As such, the findings indicate a well-designed medication prescribing process. Medication prescribing in the subject center is based on standard protocols and guidelines.  Its primary strategy to conduct continuous review of all policies and protocols implemented might be the main reason behind the low percentage findings regarding the incidence of prescribing errors. The most common prescribing errors in this study are: (1) inappropriate dose and (2) inappropriate treatment. These findings are consistent with prior studies (Al Juhani et al., 2019; Ferracini et al., 2018; Agrawal, 2009; Lesar et al., 1997). None of the errors detected were presented to patients because these were all rectified by pharmacists immediately through referral to the prescriber.

Unfortunately, an investigation of the reasons behind the prescribing errors was not done in this study. However, it was determined that some of the junior physicians in the subject center were not aware of the protocols and policies in prescribing vitamin D, which might be one of the reasons behind the high frequency of prescribing errors concerning vitamin D prescriptions. The foregoing reason was previously reported by Ross et al. (2012). Most of the patients visiting the community center are diabetic or hypertensive or both, in addition to other cardiovascular diseases, which might explain the high frequency of prescribing errors on diabetic and cardiovascular medications (Laatikainen et al., 2020; Safholm et al., 2019). Other reported reasons pertain to prescribers not using current available treatment evidence or available patient information (allergy information, other medications, and other conditions). It was also found that prescribers fail to consider appropriate information in the patient chart and to communicate the prescription appropriately (Ross et al., 2012; Velo and Minuz, 2009). High frequency of prescribing errors during the early morning hours and in the afternoon may be caused by environmental factors such as time pressures, staff shortage, and fatigue. There is no robust evidence connecting long working hours with patient harm directly, however, medication errors have been linked to fatigue and stress (Peterson et al., 1999). Stress is multifactorial and can be caused by several reasons such as interpersonal relationships, prescription volume, walk-in patients, management responsibilities and individual characteristics (Jacobs et al., 2018). Inadequate breaks and lack of staff have also been identified as problematic within the UK community pharmacy sector as an example (Lea et al., 2012).

Age and high number of unique medications per prescription per patient were also reported as contributing factors to prescribing errors (Avery et al., 2013). In this study, more than 50% of the prescriptions consisted of more than 5 items which justifies the occurrence of more than one error in 6% of the prescriptions. It was also determined that handwriting plays an important role in increasing prescription error. Fortunately, the negative effect of this factor was not high in the subject center. Moreover, computerized prescription will be introduced soon in this center as part of the continuing improvements in pharmaceutical and medical services, which  is  projected  to   significantly   reduce   prescribing errors. According to Bizovi et al. (2002), computerized prescriptions are more than three times less likely to contain errors and five times less likely to require pharmacist clarification than handwritten prescriptions.

Identifying the most common errors and the factors associated with these errors will be useful in formulating effective strategies in preventing such errors in the future. An emphasis on good prescription-making skills and increased awareness of such problems in prescriptions is recommended to be included in every induction program for junior prescribers in order to minimize the recurrence of the problem.

This study, however, may be limited by a selection bias, since only one center is involved in the analysis which is not a representative of the majority of primary care centers in the country. Moreover, the prescriber information was not taken into consideration since most of them are family and community medicine specialists and access to the prescriber name was not readily available to the pharmacy section. It is well known that the total incidence of prescribing errors may be higher than that recorded in studies at pharmacies since many errors are either not disclosed or not detected resulting to non-dissemination to the patients (Kuo et al., 2008; Friedman et al., 2007; Gandhi et al., 2005; Shah et al., 2001). Therefore, identification of the causes of prescribing errors should be conducted so that changes can be made in practice.

The rate of prescribing errors in a family community care setting is limited, however, continuous monitoring and education is pivotal to limit the errors. The implementation of computerized prescription in the future will significantly lessen the occurrence of such errors.

This research project was supported by a grant from the Research Centre of the Female Scientific and Medical Colleges, Deanship of Scientific Research, King Saud University.

The authors appreciate the Deanship of Scientific Research and RSSU at King Saud University for their technical support.