Many patients in Africa often utilize herbal medicine for the management of hyperactive gut disorders such as diarrhea and abdominal colic. There is therefore a need to scientifically evaluate efficacy of this herbal remedies. This study investigated the myorelaxant effect of Carissa edulis (Forssk.) Vahl and its possible mechanism of action using isolated rabbit jejunum preparations. Pieces of jejunum were isolated from adult New Zealand white rabbits. They were then mounted in an organ bath containing Tyrode’s solution. The rate and force of jejunal contraction were recorded and analyzed using a Powerlab that was coupled to Chart5 software for windows. The effects of the extract (0.1-10.0 mg/ml) on spontaneous contraction were investigated. Its effect (3.0 mg/ml) was also studied in the presence of LG-NAME (nitric oxide synthase inhibitor), methylene blue (soluble guanylyl cyclase inhibitor) and propranolol (non-selective β adrenergic receptors antagonist). The extract dose-dependent significantly decreased the force but not the rate of spontaneous rabbit jejunal contraction. Among the blockers used, only LG -NAME significantly blocked the effect of the extract. Aqueous root bark extracts of C. edulis possess significant myorelaxant effect on isolated rabbit jejunum. This appears to be mediated through stimulation of nitric oxide release by nitric oxide synthase.

Spasms of the gastrointestinal tract underlie hyperactive gut disorders such as  diarrhea  and  inflammatory  bowel disease (Field, 2003). These conditions are highly prevalent; for example, 1.731 billion episodes of  diarrhea occur annually and result in 700,000 deaths of children - especially those below 2 years of age (Walker et al., 2013); while inflammatory bowel disease is estimated to have a prevalence of over 1 million in the USA and 2.5 million in Europe (Kaplan, 2015). These conditions are currently managed by anticholinergics, calcium channel blockers and musculotropic agents (Annaházi et al., 2014). The remedies are associated with side effects, limited availability (Annaházi et al., 2014)and higher health care cost (Kaplan, 2015). It is for these reasons that there is an increased interest in finding cheaper, safer and locally available compounds with potential use for these conditions.

Majority of the world population rely on herbs for their medicinal needs (Ondicho et al., 2016), showing the need to scientifically evaluate the efficacy of herbal medications. Carissa edulis (Forssk.) Vahl is a member of the Apocynaceae family. Its root decoction is used to manage hyperactive gut disorders such as abdominal colic and diarrhea in the Rift Valley and Nyanza parts of Kenya which are mainly inhabited by Keiyo and Luo community respectively (Geissler et al., 2002; Kigen et al., 2014). Despite its extensive use for these conditions, no study has been done to investigate its effects on gastrointestinal motility. Therefore, this study investigated the effect of aqueous root bark extract of C. edulis (Forssk.) Vahl on gastrointestinal motility and its possible mechanisms of action of using isolated rabbit jejunum preparations.

C. edulis (Forssk.) Vahl roots were collected from Homa Bay, Kenya in July 2017, and were identified at the Department of Botany, University of Nairobi and a voucher specimen deposited (Voucher No. LLO 2017/01). The roots were cleaned with tap water, and their barks were peeled off and cut into smaller pieces. The material was then air dried at room temperature for 7 days after which it was ground into coarse powder using an electric mill.

The powdered material (100 g) was boiled in distilled water (1000 ml) for 10 min; the mixture left standing for 4 h; and the resultant mixture filtered using Whatmann No.1 filter paper- then the filtrate transferred into a round-bottomed rotary vapor flask where water was removed at a temperature between 35 and 40oC at a pressure of -760 mmHg.

New Zealand White rabbits of both sexes (1.5-2 kg) were used in this study. They were housed singly in metallic cages measuring 46 x 48 x 36 cm at standard temperature (22–25°C) and humidity with a normal light/dark cycle. The animals were fed on standard rabbit pellets, vegetables and water ad libitum, and they were acclimatized for two weeks. This study was approved by the Biosafety, Animal Use and Ethics Committee, Faculty of  Veterinary Medicine, University of Nairobi (FVM BAUEC/2018/141).

Isolation and preparation of rabbit jejunum

The animals were fasted for 24 hours before experiments but they had access to water ad libitum. They were sacrificed by cervical dislocation, their abdomen were cut open and the jejunum portion ( 6-8 cm) from the ligament of Treitz was isolated out (Grasa et al., 2005).

The upper end of the segment was hooked to an isometric force transducer (ML500/A, AD Instrument) coupled to a Power Lab data acquisition system (Power Lab 8/30). The force (g) and rate (number per minute) of contraction were recorded and analyzed using Chart 5 software for windows.

The tissues were allowed to equilibrate for 30 min before addition of any drug; the bath fluid drained at 20 min interval; and only jejunal segments that contracted spontaneously were used in this study.

To investigate the extract’s possible mechanism of action, 3.0 mg/ml of C. edulis extract was studied in the presence of LG-NAME (nitric oxide synthase inhibitor), methylene blue (soluble guanylyl cyclase inhibitor), and propranolol (a non-selective β adrenergic blocker) respectively. Normal jejunal activity was first recorded for 2 min prior to the addition of a given blocker. The extract was added 15 min after the addition of either 10 µM methylene blue or 100 µM LG-NAME (Chda et al., 2016)or 2 min after the addition of 1 µM propranolol (Kinuthia et al., 2016)followed by a 3 min record of jejunal activity before washing out.

The results were expressed as Mean ± SEM; n represents the number of experiments. Data were analyzed using SPSS version 20, while graphs were generated using GraphPad Prism version 7. One-way ANOVA, followed by the Bonferroni post hoc test were used to compare between groups. The difference was considered significant only if p ˂ 0.05. 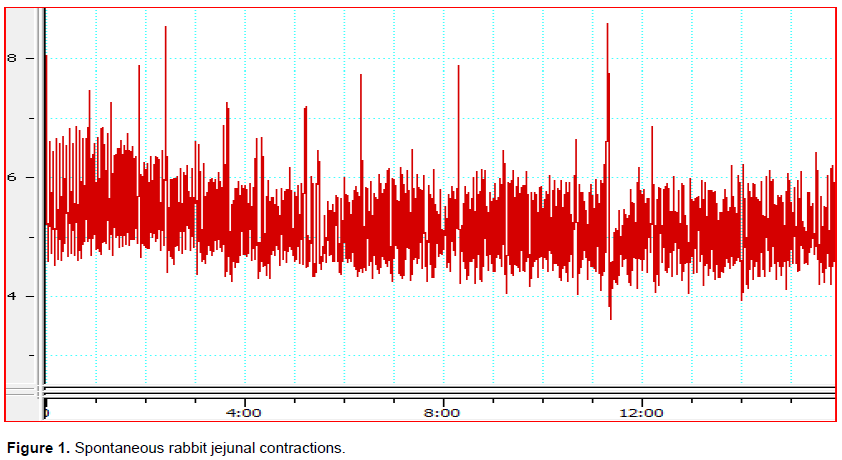 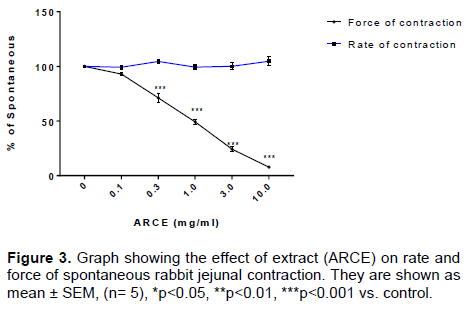 Effect of blockers on myorelaxant effect of the extract 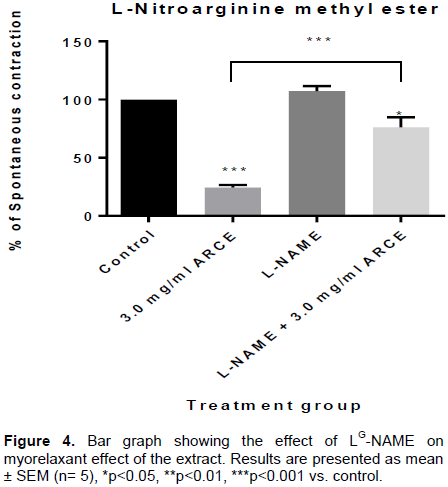 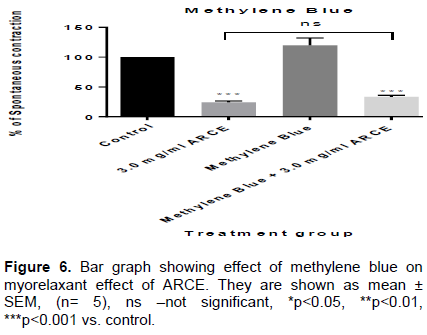 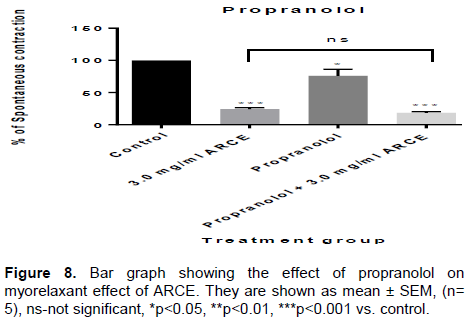 The rate and force of the isolated rabbit jejunum spontaneous contractions remained constant with time in this study .This is due to periodic membrane depolarization and repolarization by the slow waves generated by the interstitial cells of Cajal (Kito et al., 2015)

The extract had no significant effect on the rate of spontaneous rabbit jejunal contractions. These findings are similar to those of Bidens Biternata (Lour.) Merr and Sheriff (Kinuthia et al., 2016). This finding suggests that C. edulis (Forrsk.) Vahl extract did not modify the frequency of pacemaker cells (Devi et al., 2011).

C. edulis (Forrsk.) Vahl in a dose-dependent manner significantly inhibited the force of spontaneous rabbit jejunal contraction. These findings are similar to those in published literature. In deed several plants such as Matricaria recutita (Yazdi et al., 2017), Salsola imbricata (Aslam and Janbaz, 2017) and Viscum  album  (Khan   et   al., 2016) also showed a dose-dependent inhibition of the force of isolated rabbit jejunum contractions. This suggests that the inhibitory effect of the extract on the force of spontaneous rabbit jejunal contraction may have been due to its interference with calcium release or influx or by the stimulation of release of inhibitory transmitter substances.

The effect of the extract on the force and rate of spontaneous rabbit jejunal contractions were partially reversible on washing out. This is advantageous since an irreversible effect is likely to cause paralytic ileus (Alkizim et al., 2012). Nitric oxide is the major non adrenergic non cholinergic Inhibitory transmitter  in  the  gastrointestinal  tract  (Sanders et al., 2012). It is synthesized by nitric oxide synthase and it activates soluble guanylyl cyclase (sGC) which activates cGMP, and subsequently activating PKG (Sanders and Ward, 2019). LG-Nitro arginine methyl ester (a non-selective nitric oxide synthase inhibitor) but not methylene blue (a soluble guanylyl cyclase inhibitor) significantly lowered the inhibitory effect of the extract. This suggests that the extract stimulates nitric oxide release by synthase but not nitric oxide dependent soluble guanylyl cyclase pathway. Indeed, Nitric oxide-sensitive guanylyl cyclase has been shown to be dispensable for nitregic signaling and gut   motility   in      intestinal smooth muscle (Groneberg et al., 2011). In this study, L-Nitroarginine methyl ester and methylene blue increased the basal tone of spontaneous jejunal contraction; these findings are similar to those (Ragy and Elbassuoni, 2012)in which the same doses of the above blockers also caused an increase in the basal tone of rabbit jejunal contraction.

The findings of this study show that C. edulis (Forrsk.) Vahl has a significant myorelaxant effect on isolated rabbit jejunum. This effect appears to be mediated through stimulation on nitric oxide synthase. This supports its use by some African communities to manage hyperactive gut disorders such as abdominal colic and diarrhea.

Further studies are recommended in order to determine the extracts and other possible mechanisms of action as well as to identify the active compounds responsible for its effect.