Characterization of in situ coconut (Cocos nucifera L.) genotypes using morphological descriptors is of primary importance for genetic resources. Variations in five traits were recorded on 48 selected coconut palms located at 0 to 177 m above sea level in the Coastal Lowlands of Kenya. The objective of our study was to characterize coconut palms in the coastal Kenya using morphological markers. Data was recorded on palms that included tall, dwarf and hybrid varieties. Data was analyzed using Genstat Ver 14.2 software. Phylogenetic tree construction, using the neighbour joining method, revealed that the germplasm fell into three major clusters comprising of 2, 25 and 21 genotypes, respectively. Principal component analysis (PCA) showed that the first component (CP1) accounted for 65.54% of the total variation and was associated with the number of green leaves. The second component (PC2) explained 19.71% of the total variation and was associated with stem height. The results from this study indicate that morphological variation for coconut germplasm at the Kenyan coast exists for both qualitative and quantitative characters. Coconut palms did not cluster on the basis of their origin based on the counties grown.

Coconut (Cocos nucifera L.), is a monocotyledonous plant of the family Arecaceae (Palmaceae), subfamily Cocoideae and the monospecific genus Cocos. It is an important crop at the Kenyan coast, providing its growers with a source of livelihood. It also plays a significant role in the economic, cultural and social life of over 8 tropical countries in the world. Coconut is cultivated mainly as an oil seed crop. The oil is rich in lauric acid and besides being cooking oil it has a variety of other uses (Harries, 1995). Almost every part of the coconut tree can be used in either making commercial products or meeting the food requirements of rural communities (Teulat et al., 2000). Perera et al. (2000) considered Southeast Asia as the centre of origin of coconut, whilst Melanesia is thought to be the most likely region for coconut domestication along the coasts and islands between Southeast Asia and the Western Pacific (Harries, 1995). Coconut has been found distributed in many parts of the world including Central and South America, East and West Africa, Southeast Asia, East Asia and the Pacific islands. According to Ohler (1984) dissemination was achieved by seeds floating in sea currents and subsequent germination on the shore, followed by further human dispersal. Geographic isola-tion, introgressive hybridization, mutation, and selection are the most likely causes of population differentiation of coconut. The mode of dispersal of coconut is likely to have resulted in founder effects influencing population differentiation (N’Cho et al., 1993). Tall and dwarf types are the two main stature and breeding habit categories used as the primary classification of coconut (Menon and Pandalai, 1958). Tall coconuts (talls) grow to a height of about 20-30 m and are allogamous, late flowering, and their nuts are medium to large in size. They are hardy and thrive in a wide range of environmental conditions. Dwarf coconuts (dwarfs) grow to a height of about 10-15 m and are autogamous, early flowering, and generally produce a large number of small nuts with distinctive colour forms (Menon and Pendalai, 1958). Introgression of talls and dwarfs and further selection and dissemination by man produced the wide range of varieties and pan-tropical distribution of coconut seen today (Harries, 1978).

The improvement of crop genetic resources depends on continuous infusion of desired traits of wild relatives, traditional varieties and use of improved breeding methods. These require an assessment of diversity to select superior varieties (Mondini et al., 2009). Diversity analyses in coconut palm to date have been done by morphologi-cal traits, biochemical and molecular markers (Dasanayaka et al., 2009). Using morphological and biochemical markers have disadvantages due to the long juvenile phase of the plants, high cost, long-term of field evaluation, potential environment factors’ influence on the phenotype and limited number of available phenotypic markers (Manimekalai et al., 2006). However, morphological markers are easy to study. Assessment of the genetic diversity present within a species is a prerequisite for future sustainable breeding efforts and germplasm management. Molecular markers provide an important technology for evaluating levels and patterns of genetic diversity and have been utilised in a variety of plant species (Rafalski et al., 1996). To date, there are over 300 recorded ecotypes of coconut (Coconut Genetic Resources Network Database v. 2.2 COGENT/IPGRI), with evaluation and characterization being mainly carried out on morphological and reproductive traits (Fernando et al., 1995).

The study was conducted in the coastal lowlands of Kenya in April 2013. A total of 48 samples were included in the study. There were 45 tall palms designated East African Talls (EAT), including the suspected hybrids and three East African Dwarfs (EAD) that broadly represented all varieties of coconut from different coconut-growing regions at the Kenyan coast. For the character assessment, eight varieties were included that researchers and farmers considered as hybrids. Of these, 15 palms were sampled from gardens/house yards, 16 from small farm fields while 17 were sampled from large farm fields. Samples were specifically taken from areas where the palms grown were morphologically different and there was a marked change in altitude or cropping systems, where a formidable barrier such as a mountain or a river existed or where local people were ethnically different (in terms of dialect) from previous collection sites. This strategy aimed at reducing chances of sampling duplicates. Selected areas in coastal regions were sampled to cover different agro ecological zones, designated as Coastal Lowland (CL), Sugarcane zone (CL2), Coconut - cassava Zone (CL3), Cashew-cassava Zone (CL4) and Millet-livestock zone (CL5) (Table 1 and Figure 1). The range of altitudes covered was 0 m above sea level at Faza in Lamu County to 177 m above sea level at Rabai, Kilifi County. Palms with similar features growing in ecologically distinct sites, were assumed to be of different eco-strains and were both sampled and characterized. For every palm tree sampled, Global Positioning System (GPS) data was recorded and the tree photographed while notes were taken on the general structure and appearance of the population, origin of the population and the collection sources. Adjacent palm status was also recorded. 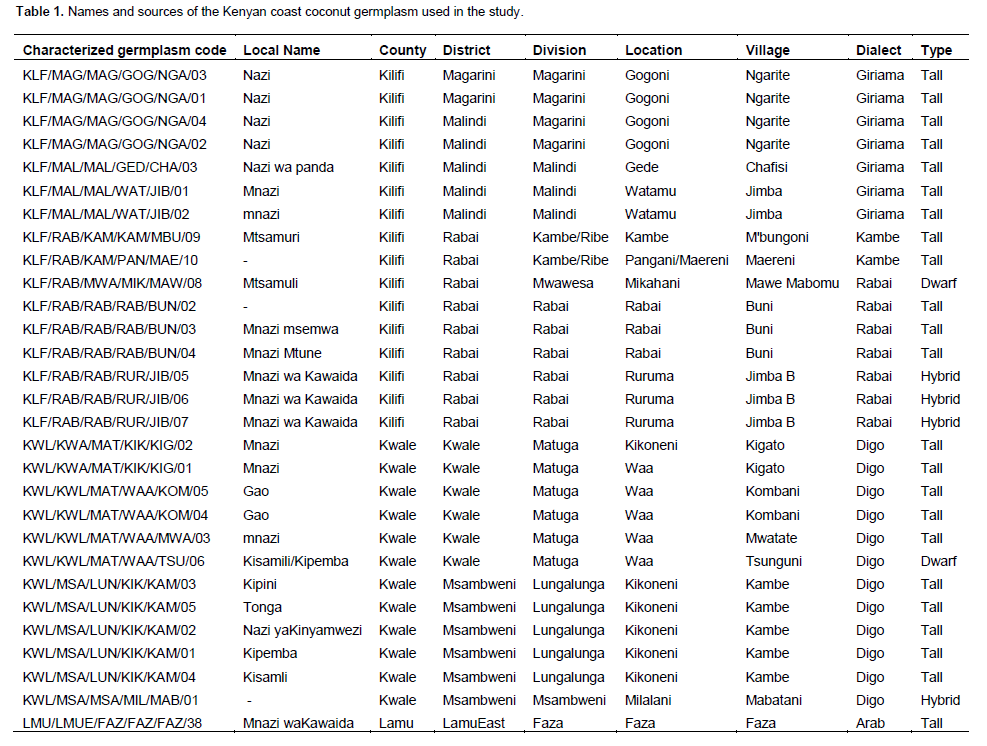 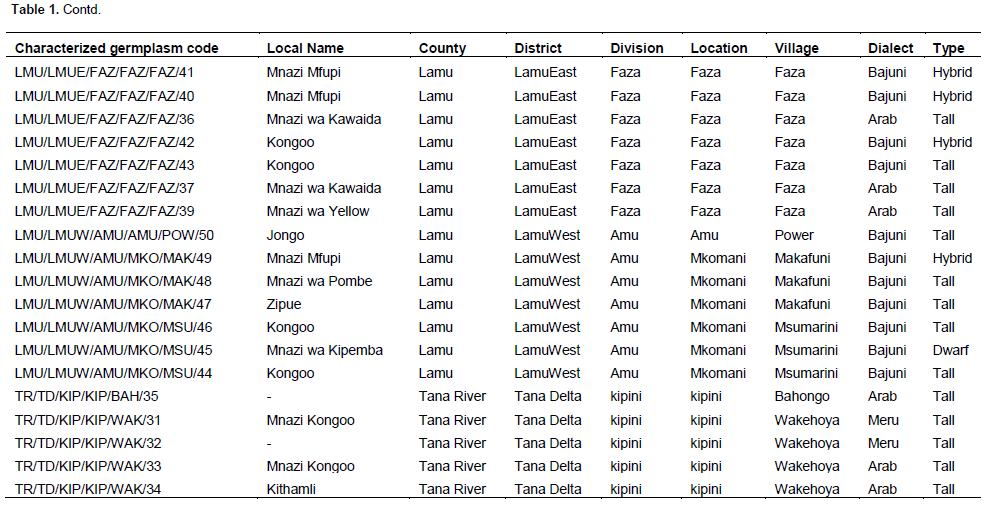 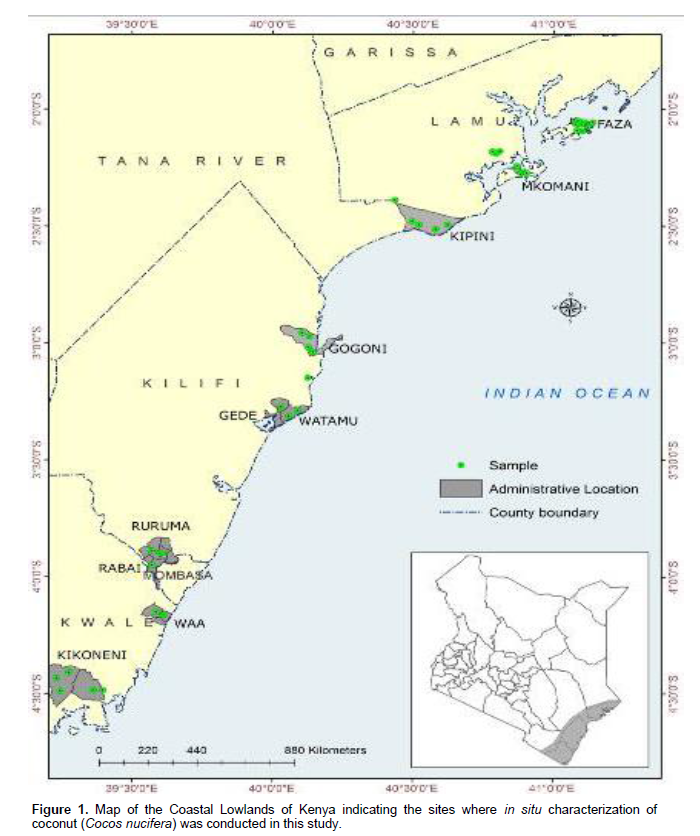 A total of five traits were characterized, which included stem, crown, leaf and fruit morphology as well as stress severity of the crop assessment using the descriptors listed for coconut by Bioversity International (Batugal et al., 2005). The characters assessed for the 47 selected palms are listed in Table 2. In addition, vegetative, reproductive parts, apple and nut traits were assessed based on the protocol of the coconut descriptor list of the International Plant Genetic Resources Institute (IPGRI, 1995). 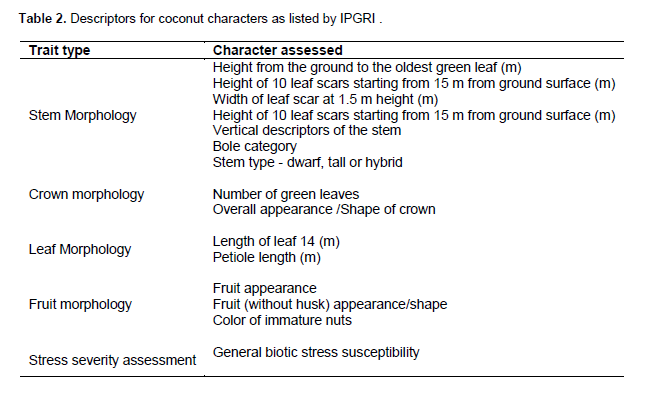 The quantitative and qualitative morphological traits of coconut characterized were classified using dissimilarity coefficients and the neighbour joining from the usual Euclidean distance of complete linkage clustering method.

In this study, seven trees had yellow stalks and immature nuts; two had red yellow; one had red; 12 exhibited green; 19 had green yellow; four showed red yellow-green (brown) while two trees had orange stalks as well as immature nuts. The fruit morphology from five trees were oblong; 13 ovoid; 26 angled and four round. Seventeen trees sampled had no boles while 18 and 13 exhibited low and high bole categories, respectively. Crown morphology was categorized as spherical (14 trees), hemispherical (seven trees), V-shaped (seven trees) and X-shaped (19 trees). Twenty one trees were observed to have almost round fruit shape while 15, nine and eight trees had ovoid, oblate and pointed fruit (without husk) respectively. Tree height ranged from 12.1 m (KLF/RAB/KAM/PAN/MAE/10) to 1.4 m (TR/TD/KIP/KIP/WAK/34). Width of scar at 1.5 m height varied from 1.2 m (KLF/RAB/KAM/PAN/MAE/10) to 0.4 m (KLF/RAB/BUN/03). On vertical descriptors, 31 trees were characterized as erect, one angled, one bowed while 15 had curved stems. The number of green leaves showed variation ranging from 51 (LMU/MUW/AMU/AMU/POW/50) to 9 (TR/TD/KIP/KIP/BAH/35). Longest petiole length recorded was 3.5 m for KWL/MSA/MSA/MIL/MAM/01 and the shortest was 0.6 m, recorded for LMU/MUW/AMU/MKO/MSU/44 and TR/TD/KIP/KIP/BAH/35.

The Counties and their respective divisions where the study was conducted are given in Table 1. In addition, global positioning system (GPS) data is shown in Figure 1. Generally, genotype clustering did not follow the geographical origins from which the genotypes were sampled, suggesting an exchange of germplasm among the coastal population probably due to the fact that farmers could have acquired planting materials from fellow farmers across the region. It is evident from our results that many genotypes from different origins over-lapped; an indication of morphological redundancy in the characterized germplasm. 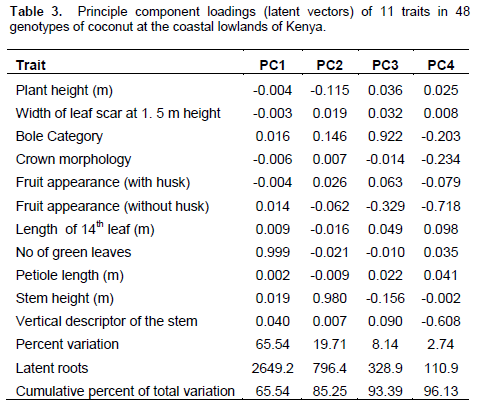 Dissimilarity coefficients and the neighbour joining from the usual Euclidean distance of complete linkage clus-tering method divided the 48 coconut genotypes into two major clusters (Figure 2). Genotype LMU/LMUW/AMU/MKO/MAK/49 was grouped in a cluster of its own while other genotypes were grouped together. LMU/LMUW/AMU/MKO/MAK/49 was the shortest nut at on 2.28 m. Genotypes KLF/RAB/RAB/RUR/JIB/05,KLF/RAB/RAB/RUR/JIB/06 and KLF/RAB/RAB/RUR/JIB/07 formed a minor cluster mainly due to their tall palm types, stalk color and height of 10 leaf scar starting from 1.5m from the ground; as did genotypes KLF/MAG/MAG/GOG/NGA/03, KLF/MAG/MAG/GOG/NGA/04, LMU/LMUE/FAZ/FAZ/FAZ/36, KWL/KWL/MAT/WAA/KOM/05 and LMU/LMUE/FAZ/FAZ/FAZ/37. They were dwarf, had the same crown morphology, vertical stem type as well as length of 14th leaf (m). Other genotypes that belonged to the same cluster were LMU/LMUW/AMU/MKO/MAK/48, KLF/MAG/MAG/GOG/NGA/01, TR/TD/KIP/KIP/WAK/31 and KLF/MAL/MAL/WAT/JIB/01. They were all tall palm types with brown stalk, erect vertical stem as well as high bole type and same length of the 14th leaf. Similarly, close proximity was observed for LMU/LMUE/FAZ/FAZ/FAZ/38, KLF/MAG/MAG/GOG/NGA/02, KWL/KWA/MAT/KIK/KIG/01, KLF/MAL/MAL/GED/CHA/03 and LMU/LMUW/AMU/MKO/MSU/46. 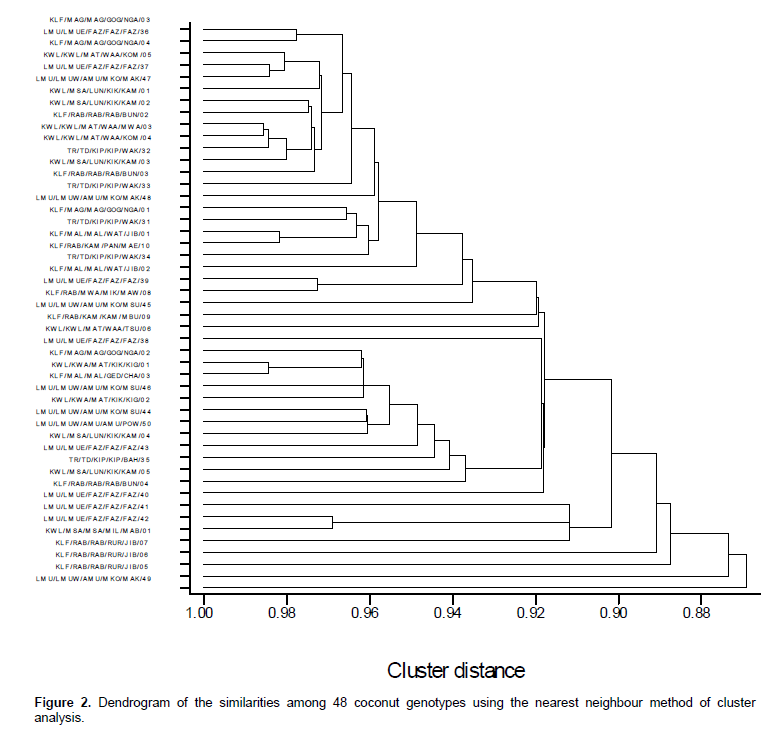 It is clear from the dendrogram, PCA and as shown by the Plates 1 to 4 that coconut germplasm at the Kenyan coast is diverse in various morphological categories. It is our view that in Kenya, just as reported in Sri Lanka (Fernando et al., 1995), coconut can be found growing in a range of environmental conditions other than the optimal conditions and maintain their productivity despite the stress and management conditions which included palm trees not of uniform age, unweeded fields, progeny generations mixed in a population, no pure stands and lack of fertilization. In almost all instances, even the age of the palms was not known. In addition, we noted that coconut plantations in Kenya, especially of EATs have undergone preferential selections for yield, nut size, nut shape, nut colour, kernel thickness and tolerance to drought, pest and disease as argued by Perera et al. (1996). 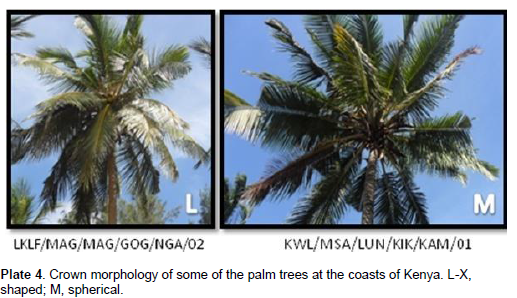 In some cases it was evident there could have existed hybrid varieties as some EATs bearing green yellow or red green fruits could be seen suggesting hybridity between the EATs, which usually bear green fruits and the EADs that commonly bear yellow fruits. There also existed tall palms with yellow nuts, and intermediates with the dwarfs suggesting under-dominance of yellow nuts over green ones. Selecting for variations explained by the PCA and cluster patterns obtained from different genotypes and probably environments could be useful for selection of genetically diverse genotypes for improvement programs in coconut. However, owing to the fact that morphological characters are under heavy control of the crop growing environment, diversity studies using DNA markers is recommended for thecharacterized germplasm in this study.