Chickpea ranks third among pulses, and it accounts for 12% of the world pulses production (Khan and Khan, 2011). In Ethiopia it accounts for about 14.31% (third) of the acreage and 17.28% (second) of the total production of all grain legumes grown in the country. Area of production has been increasing greatly in recent years. In the 2011 main (MEHER) season, about 232,000 ha of cultivated land is used for the production of 400,200 tons of chickpea (CSA, 2012). Chickpea, a multi-functional crop, has an important role in the diet of the Ethiopian small scale farmers’ households and also serves as protein source for the rural poor who cannot afford to buy animal products. The crop also serves as a source of cash income and plays a major role in Ethiopia’s foreign exchange earnings through export to Asia and Europe. Despite its nutritional values and economic importance, the average yield of chickpea is relatively low in the country. This is primarily due to poor genetic makeup of the cultivars available, excessive vegetative growth, low tolerance to diseases and non-availability of grains of improved varieties which need immediate attention of the breeders for the evolution of maximum yielding varieties which fulfill the requirements of ever increasing population.
Genetic variability is a prerequisite for any breeding program, which provides opportunity to a plant breeder for selection of high yielding genotypes. However information on the association between yield and its various components provide the basis for the selection of improved varieties (Saleem et al., 2005). Information on the relative magnitude of the different sources of variation particularity among different genotypes for several traits helps in measurement of their range of genetic diversity and may provide evidence for identification of their relationship. The variability of a biological population is an outcome of genetic constitution of the individuals and its interaction with the prevailing environment. A survey of genetic variability with the help of suitable parameters such as genetic coefficient of variation, heritability estimates and genetic advance are absolutely necessary to start an efficient breeding program. Some of the characters are highly associated among themselves and with seed yield. The analysis of the relationships among these characters and their associations with seed yield is essential to establish selection criteria (Atta et al., 2008). Progress in any breeding program depends upon the nature and magnitude of variability present in the base population. Assessment of the extent of genetic variability within chickpea is fundamental for chickpea breeding (Qureshi et al., 2004).
Chickpea breeders should consider heritability estimates along with genetic advance because heritability alone is not a good indicator of the amount of usable genetic variability (Noor et al., 2003). The concept of heritability explains whether the differences observed among individuals arose as a result of differences in genetic makeup or due to environmental forces. Genetic advance gives an idea of possible improvement of new population through selection, when compared to the original population. The genetic gain depends upon the amount of genetic variability and magnitude of the masking effect of the environment. Information of the genetic variability, heritability and association of various characters provides a basis to the plant breeders to breed the chickpea genotypes possessing higher yield potential. Selection on the basis of grain yield, a polygenic character, is usually not very efficient, but selection based on its component characters could be more efficient. The present study was initiated with the prime objective of finding the mutual relationships of different quantitative traits and the type and extent of their contribution to grain yield.

Description of the experimental site
The field experiment was conducted in Maichew Agricultural College which is located at 39°32´E and 12°47´N in the Tigray National Regional State, Ethiopia. Maichew is found 123 km far from mekelle the capital city of Tigray region and 662 km north of Addis Ababa the capital city of Ethiopia. It is located at 2396 m above sea level and receives an average annual rain fall of 758.7 mm and annual mean temperature of 16.4°C.
Experimental materials and procedures
Twelve chickpea genotypes obtained from the High Land Pulse Research Program of Debre Zeit Agricultural Research Center (Table 1) were planted in a randomized complete block design with three replications. Each plot consisted of 4 lines of 4 m length by 1.2 m width (4.8 m2). The plant-to-plant and row-to-row distance was maintained at 10 and 30 cm, respectively. Agronomic practices were carried out as per recommendation.

Data collection
The following data were collected from the experiment both per plot and per plant basis.
Data recorded on plot basis
a) Days to 50% flowering (DF)
b) Days to 90% maturity (DM)
c) Grain filling period (GFP)
d) Hundred Seed weight (HSW)
e) Biomass yield (Biological yield) (BY)
f) Seed yield per hectare (SY)
Data recorded on plant basis
The data for the following characters were recorded from five randomly taken plants from each plot and the average value was considered per plant basis.
a) Plant height (PH)
b) Number of Primary Branches per Plant (NPB)
c) Number of Secondary Branches per Plant (NSB)
d) Number of Pods per Plant (PPt)
e) Number of Seeds per Pod (SPo)
F) Number of Seeds per Plant (SPt)
Statistical analysis
The phenotypic, genotypic and environmental variances and coefficient of variation is defined according to the formula suggested by Singh and Chaudhary (1985) as follows:

= grand mean of character. Broad sense heritability (H) expressed as the percentage of the ratio of the genotypic variance to the phenotypic variance will be computed on genotype mean basis as described by Allard (1960) as:

Genetic advance in absolute percent of the mean (GAM), assuming selection of superior 5% of the genotypes will be estimated in accordance with the methods illustrated by Johnson et al. (1955). 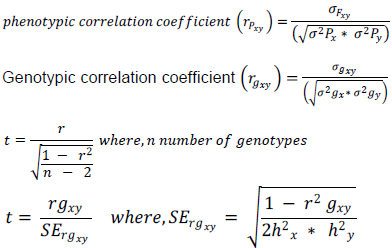 Phenotypic correlation coefficient was tested for their significance using the formula suggested by Sharma (1998).

Genotypic correlation coefficient was tested with the following formula suggested by Robertson (1959):

The magnitude of PR indicates how best the causal factors account for the variability of the dependent factor (Singh and Chaudhary, 1999).

On the basis of these results it was suggested that pods per plant, primary branched per plant, secondary branches per plant and 100 seed weight may be given more importance while making selection for higher yield potential in chickpea.

The authors declare that there is no conflict of interests regarding the publication of this paper.

The author, Assefa Amare Hagos, would like to acknowledge Maichew agricultural college for financing the practical field expense of this study.