Insects are diverse and abundant in forest ecosystems, but poorly documented in afromontane rainforests in Southwestern Ethiopia where Coffea arabica L. originated and is distributed worldwide. Therefore, the present study was initiated to study the occurrence of coffee leaf damaging insect pests in the afromontane rainforest of southwestern Ethiopia. Accordingly, surveys on insect pest of coffee were conducted to investigate pest status and; their damaging intensity in three (Yayu, Berhane-kontir and Bonga) forest coffee ecosystems. Based on general uniformity of forest coffee population, each forest coffee was stratified into three forest sites and 16 trees were systematically selected for leaf insect damage assessment. Survey and damage assessment results reveal that, coffee leaf damaging insect pests in afromontane rainforests of Southwestern Ethiopia include 12 insect families from five insect orders. Mean incidence data showed, significant different (P< 0.05) during different survey seasons within and between three forest coffee populations. Among the frequently occurred and damage causing insect pests were Leucoplema doherthyi, Cryphiomystis aletreuta, coffee giant looper and Leucoptera species and had 72.20 ± 1.42, 14.41 ± 5.15, 10.73 ± 4.30 and 2.63 ± 1.24 proportion damage across forest coffee populations, respectively. There is also high variation among major coffee leaf damaging insect during different seasons (rainy, rainy to dry transition, dry and dry to rainy season transition season). Generally, there were differences in insect pest incidence between and within forest coffee populations with regard to coffee leaf damaging insects and relatively low incidence observed compared to other coffee production systems. The present findings complement other research results meant for the conservation of remnant forest and its biodiversity especially to explore the natural enemies in these forest ecosystems.

Coffee is an evergreen perennial crop grown in ecosystems, which favors insect pest to survive from year to year (Wrigley, 1988). According to Le Pelley (1968), one particular consequence for this reason is; it is not possible without coffee to employ the useful method of pest control applied for as annual crops particularly cultural control like “closed season” during which the crop is completely removed from the field. In general, succulent green shoots, leaves, flowers, and young fruits of coffee plant parts are attacked by different chewing and sucking insects (Wrigley, 1988; Mugo, 1994).

Despite the existence of suitable natural conditions for coffee production, the average national yield is very low in Ethiopia. Insect pests are among a number of factors that contribute to low yield (Mesfin, 1989; Million, 2000). Over 49 species of insect pests were recorded on coffee in Ethiopia, which were categorized as major, potential and minor pests (Million, 1987; Esayasl et al., 2006). Antestia bugs, Antestiopsis intricata (Ghesquiere and Carayon) and Antestiopsis facetiodes (Greathead) and coffee leaf miner, Leucoptera caffeina (Washbour) are considered as major insect pests of coffee particularly in large scale farms. Coffee berry borer, Hypothenemus hampei (Ferriere) is a potentially important insect pest of coffee in Ethiopia. Coffee insect pest status and category have been studied in plantation, garden and to some extent in semi-forest coffee production systems, but there is no single study so far conducted in forest coffee ecosystem, where coffee is grown as wild and used as organic product.

Furthermore, the diversity and the economic value of the Ethiopian coffee gene pool and its forest habitat as well as the institutional framework of forest users have been studied. The in-situ conservation of wild coffee offers an interesting approach in biodiversity conservation including both flora and fauna (Chemeda et al., 2011a, b; COCE, 2007). However, still the status of insect pest has not been assessed and described; and no reliable information exists in such genetically diversified ecosystems. In order to supplement in-situ conservation of the genetically diversified forest coffee plant and associated fauna for sustainable use, it is crucial to study the status of insect pests in different afromontane rainforest coffee populations and examine the extent of damage they inflict. Hence, the current study was initiated to obtain base line information on the status of forest coffee leaf damaging insect pests to contribute significantly to the overall conservation of forest coffee which is considered as source of organic coffee to the world market. Therefore, the study was initiated with the objective to investigate occurrence and incidence of coffee leaf damaging insect pests in afromontane rainforests of southwestern Ethiopia.

Description of the study sites

The study sites were selected based on previous studies of joint project between the Center for Development Research (ZEF), Bonn University, Germany and the Ethiopian Institute of Agricultural Research (EIAR), Ethiopia, which focuses on “conservation and use of the wild populations of C. arabica in the montane rainforests of Ethiopia”. It was undertaken in Yayu (Gaba-dogi), Berhane-kontir and Bonga forest coffee populations, which are located 580, 620 and 420 km away from Addis Ababa to southwestern part of the country, respectively. Yayu forest coffee population is found in western part of Oromia Regional State, while Berhane-kontir and Bonga coffee populations are found in the Southern Nation Nationalities Peoples Regional state? (SNNPRs). The forest coffee populations are representatives of the different agro-ecologies for forest coffee production areas with elevations ranging from 1050 to 1900 m.a.s.l. and all exhibit tropical humid climate. From each forest coffee population, three representative sites of approximately one hectare was selected for the study. Plots were ecologically described including the slope, aspect (direction) and altitude within different gradient. Clinometer and compass were used to measure the slope and the aspect, respectively. Co-ordinates for the study sites were recorded using Geographic Positioning System (GPS) (Table 1).

In order to characterize shade structure (canopy coverage), forest inventories was made at each site. A 20 by 20 m plot replicated three times was used to describe the shade status for each site. Shade canopy coverage was visually estimated and classified into three classes: Low, medium and dense shade tree coverage which coincides with < 40, 40 - 60% and > 60% canopy coverage, respectively.

A reconnaissance survey was carried to find out general information about each forest coffee populations, to select and tag experimental trees in each forest site. Based on general uniformity of coffee trees, shade status and elevation of forest coffee population, each population was classified into three forest sites (Table 1). Forest coffee population refers to three forest localities, while sites are strata in each population. Latter on from each site 16 trees were systematically selected employing the zigzag sampling method and tagged for leaf damage assessment. Furthermore, each tree was stratified into three-canopy layer and a pair of branch from each layer was selected for the assessment of leaf damaging insects.

Insect samples were collected during different coffee fruit phenological stages four times in all selected forest populations. Specimens were collected using different methods including hand collection, aspirator and sweep net. Collected insect samples were labeled with information including co-ordinates, altitudes, slopes, date of collection and developmental stage of the pest. All insect specimens were identified at the Biosystematics Department of the International Center for Insect Physiology and Ecology (ICIPE), Nairobi, Kenya. 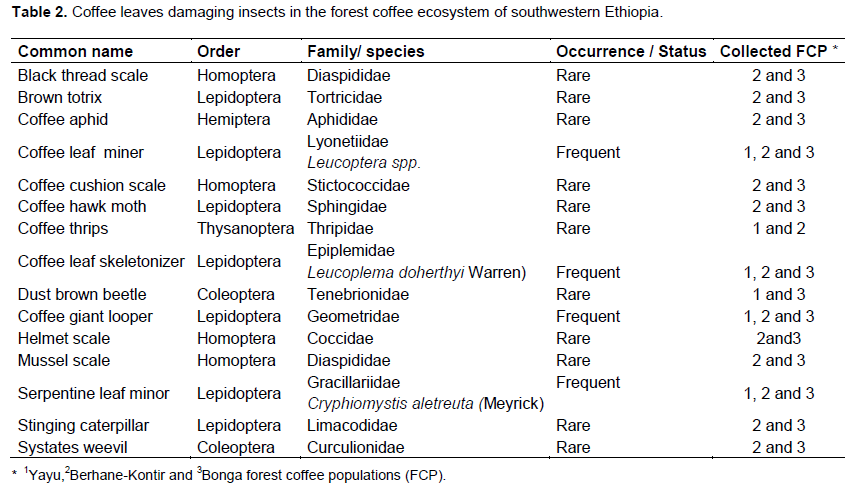 It can be noticed that all the coffee tree under observation showed damage caused by insects. However, damage proportion caused varies among the major coffee leaf damaging insects at different seasons and forest coffee populations. Coffee leaf skeletonizer was among the most commonly occurring insect pests causing coffee leaf damage and showing the highest proportion of damage incidence (59%) out of 33% leaf damage incidence caused by the four most frequently occurring coffee leaf insect pest during rainy season data collected. Also, data collected three month later revealed, the pest showed the highest proportional damage incidence (70%) across forest coffee populations with and as high as 84 and 78% for data collected during dry and dry to rainy season transition, respectively (Table 4). Considering Yayu, Berhane-konter and Bonga forest coffee popula-tions, coffee leaf skeletonizer shared about 71, 72 and 74% proportional damage, respectively to other three major coffee leaf damaging insects (Figure 1). 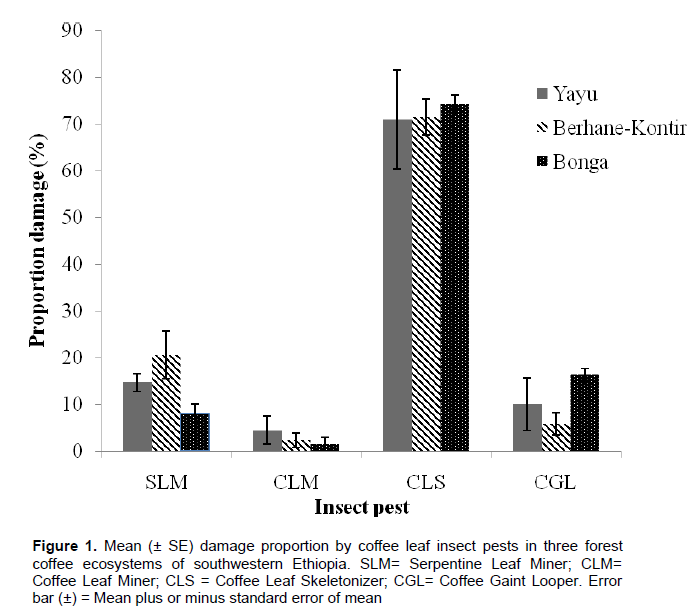 Twelve (12) insect families from five insect orders of coffee leaf damaging insect were recorded in afromontane rainforests of southwestern Ethiopia. Afromontane rainforests in southwestern part of the country are characterized by complex ecosystems, in which many components including insect pests interact towards a prevailing equilibrium with natural enemies towards a steady state. As a result, occurrence and distribution of coffee insect pests was relatively low, probably due to the efficient role of natural enemies in stable ecosystems as there is minimum human intervention in these protected ecosystems. Different authors reported vegetation diversity play key role in insect pest management and their population response (Altier and Nicholls, 1999; Andow, 1991; Gibson and Jones, 1977).

Coffee serpentine miner comes after coffee leaf skeletonizer in importance in forest coffee populations of the study areas. However, there was no report on the incidence of coffee serpentine leaf miner from Ethiopia, but Million and Bayisa (1986) stated that the pest was very common in most coffee growing areas of Ethiopia though their population was highly suppressed by the natural enemies. The authors also reported, coffee serpentine miner can easily build its population and reach damaging level if its parasitoids are killed by pesticides as witnessed by the application of dieldrin to control ants in Mizan Teferi.

Coffee gaint looper ranked third in level of incidence in forest coffee populations with about 11% infestation among all major coffee leaf damaging insects. Waikwa (1981) also reported that Coffee gaint looper is most common and densely populated in areas of hot weather coffee growing areas in Kenya. Similarly, Crowe (2004) stated this insect pest became prominent in Kenya in 1961 following the spraying of parathion. However, coffee leaf miner, Leucoptera species showed relatively the lowest proportional incidence among major leaf damaging insects across forest coffee populations. However, study by Million and Bayisa (1986) and Million (1987, 2000) reported that coffee leaf miner comes next to Antestia bug in importance causing heavy defoliation when there is sever infestation in other coffee production systems other than forest. Studies conducted at Agaro Sub-Center, southwestern Ethiopia indicated that percentage leaf damage due to this insect pest ranged from 2.2 - 55% with an average of 13% infestation (IAR, 1986).

The result of this study indicated that there was no coffee tree free from insect pest attack. At least one insect pest species is associated with it. However, damage was mostly negligible and very low. And, gene-rally incidence of forest coffee insect pests observed was relatively low compared to the other coffee production systems in the country and other coffee producing countries.

As the result, present research findings suggest that, these coffee stands may not urgently recommend additional control for leaf damaging insects, but it supplements other research findings to conserve remnant forest and its biodiversity in southwestern part of the country. Especially, it can serve as areas for exploration of different natural enemies for key and chronic pests of coffee production worldwide.