University shared governance refers to the control and administration of higher education institution in which faculty members, administrators, and trustees share equal responsibilities. Currently, shared governance between faculty members and administrators inside academic institutions is still an unending point of concern in the educational realm worldwide including the Kingdom of Saudi Arabia. Thus, this paper wants to determine the level of participation of Shaqra University’s (SHU) and Technical and Vocational Training Colleges, (TVTC) Faculty members in institutional decision-making in line with the global shared governance apprehension through the administration of survey questionnaires distributed to both institutions. Of 140 opinion poll dispensed to SHU and TVTC, 128 were reclaimed and had high validity. The respondents were composed of assistant professors, associate professors, professors, assistant lecturers and lecturers.  This study, upon checking its stability and coefficient, concludes the following: (1) the level of participation of faculty members of SHU and TVTC in general decision-making including decisions concerning academic training, students/trainees, staff member, program plans, local society, and administrative/finance has significant difference, (2) the factors affecting decision-making also has significant difference due to system regulations, nature of the problem and environmental conditions, (3) the relation of decision-making participation to job satisfaction has no significant difference. This discovery transpires to the recommendation of increasing the faculty’s participation in academic and administrative decision-making more than its current level.

The research method used in the development of analysis for the faculty members’ view about their current level of participation in decision making particularly inside the organizations of Shaqra University and Technical Colleges is Quantitative Cross-sectional Survey Approach in which several key questions are listed for the purpose of identifying the actual reality of the level of participation of the faculty members of both organizations in decision making from its faculties’ point of view. This study also used purposeful random sampling in which participants are selected based on its significance to the subject matter of study. The study group of this research is composed of faculty members in Shaqra University (SHU) and Technical and Vocational Training Corporation (TVTC), which were chosen for the convenience of the study. The study has depicted the SHU with its entire majors, and samples have been chosen randomly from the original community. A random sample is regarded as a basic condition to use the statistical tools and the morale tests. Random sample is a sampling method in which all members of the study have an equal and independent chance of being selected.
Sample of the study
The sample of the study was chosen randomly and it consisted of 128 faculty members distributed as follows: 72 faculty members from SHU University, and 56 faculty members from TVTC University during the academic year 2016/2017.
140 questionnaires were distributed over the study group and reclaimed 128 feedback forms afterward. The total number of valid for statistical analysis is 128.
In Table 1, 56% of the respondents came from SHU, and the remaining 47% were from TVTC. 5 participants were professors, 11 were associate professors, 31 were assistant professors, 40 were lecturers, and 31 were assistant lecturers. The table shows the distribution of the study community and sample.
Of the 128 members, 54 of them were less than five years in the field of teaching, 47 were from five years to nine years of service, and the remaining 27 were already tenured.
Tool of the study
The researcher used a questionnaire in order to answer the questions of the study; it consisted of 71 items.
Tool validation
The questionnaire was drafted in its final form based on the observation of the arbitrators in which the percentage of the agreement is supposed to be not lesser than 75% of the valid paragraphs, as Bloom points out. Thus, the paper should get a 75% of the questionnaire paragraphs as well as with its scale. 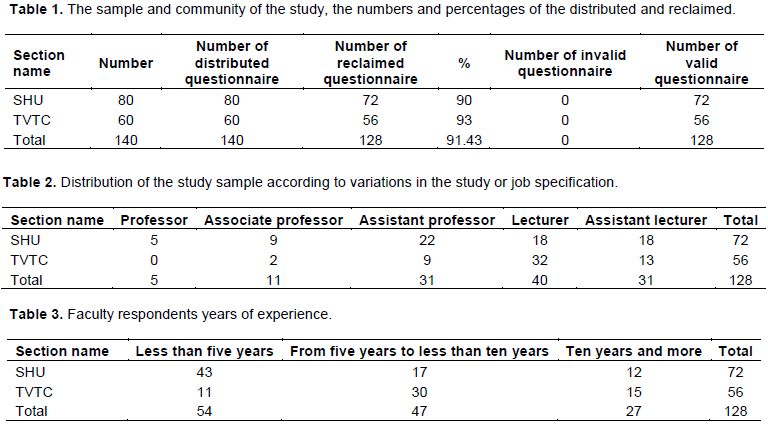 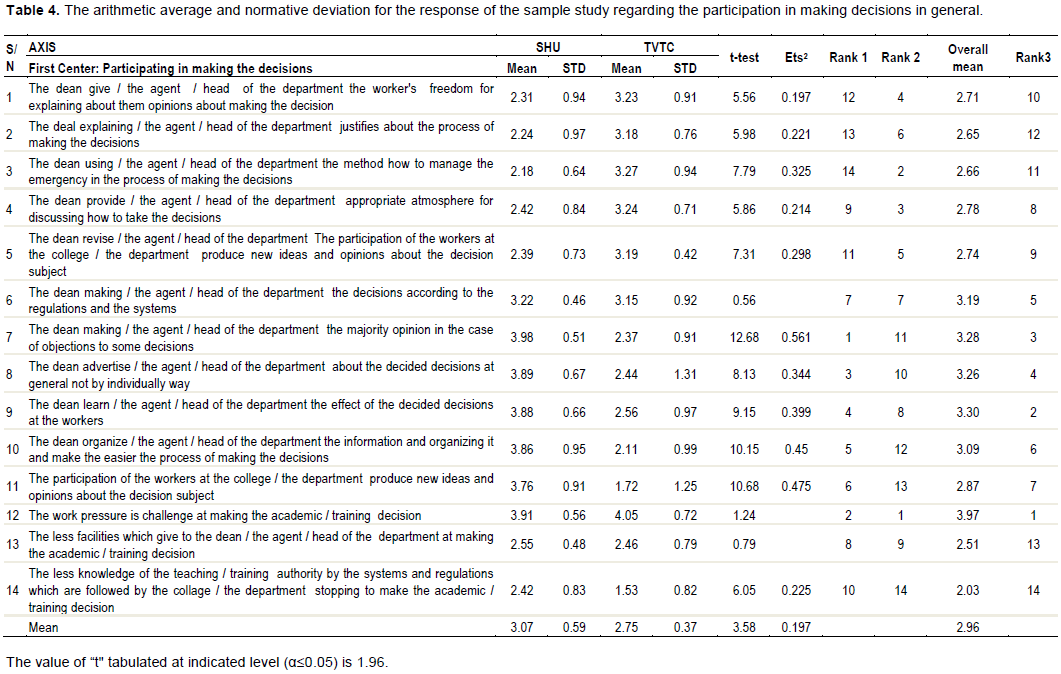 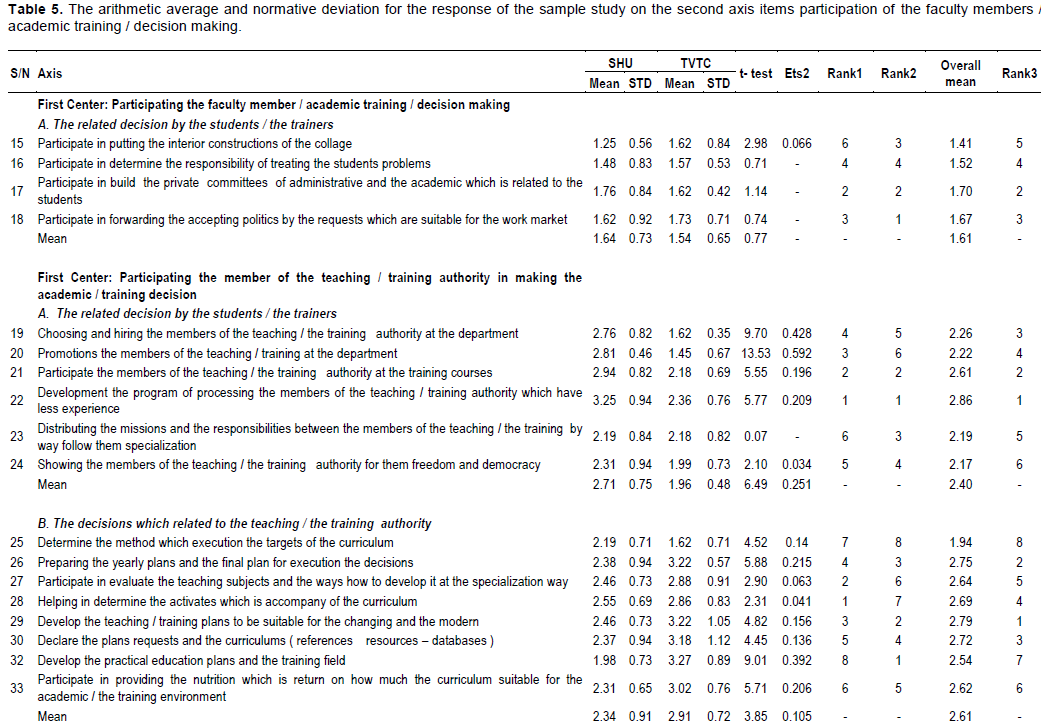 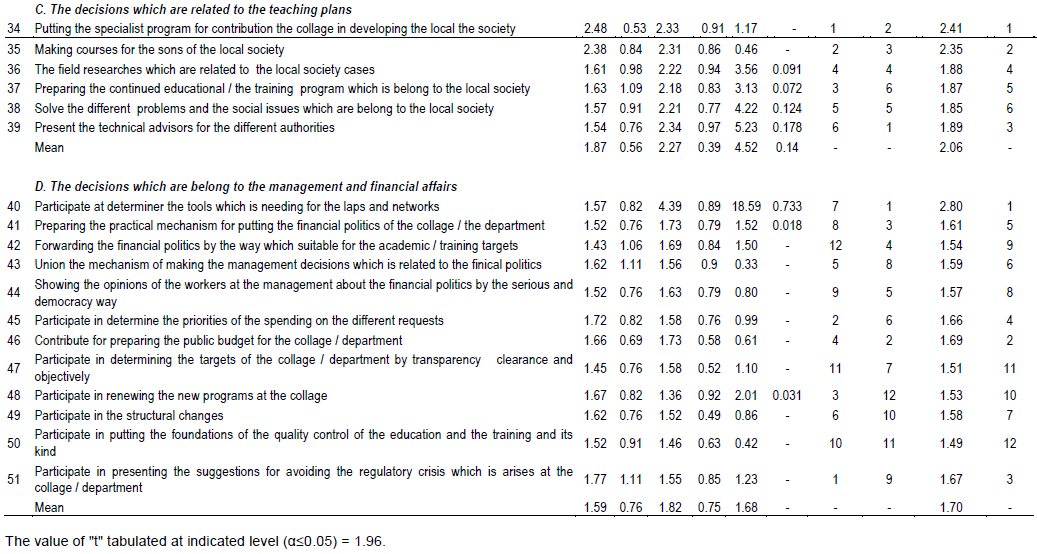 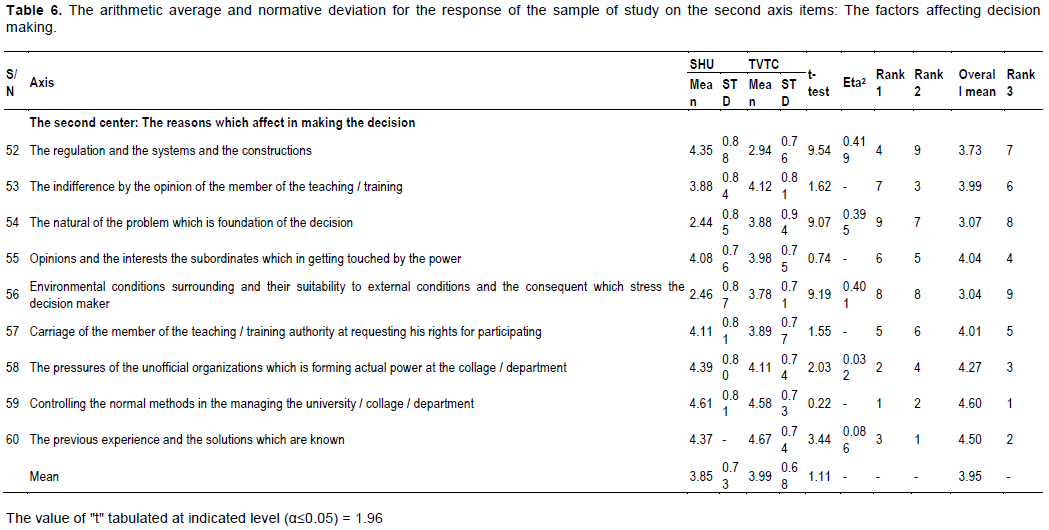 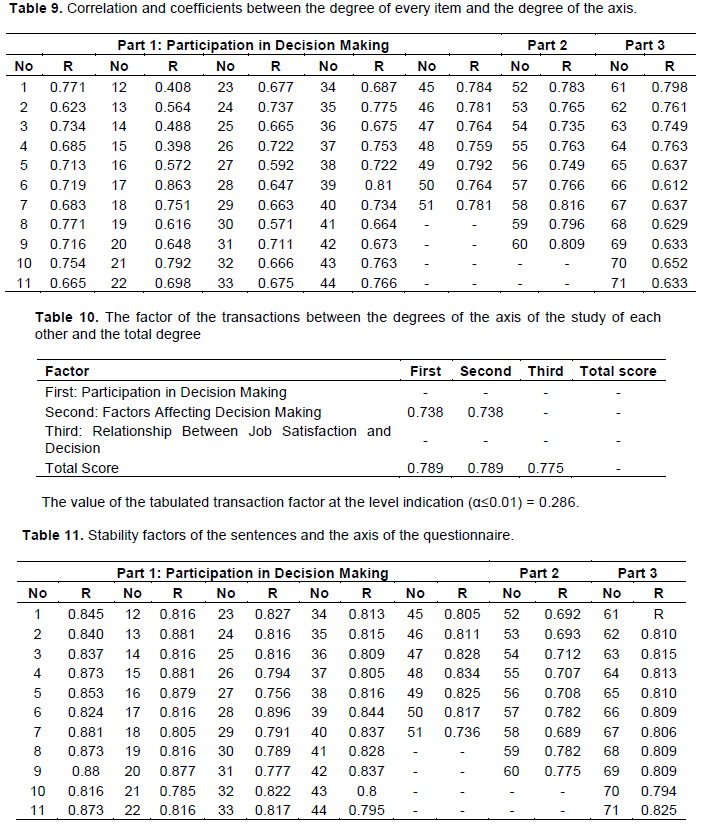 The findings showed that the research university had adopted an adequate decision-making style. The data suggest that inclusiveness in decision making decreases with the hierarchy of decision-making groups, with the most senior groups being seen as the most exclusive, least transformed, closely guarded and offering restricted entry. Similarly, decision-making at different levels is associated with different levels of job satisfaction related to the balance made between competing dilemmas of people versus process. There was no much direct evidence from the data to determine the extent to which staff felt adequately involved in the decision framing processes. However, indirect evidence suggests a number of scenarios. There were discrepancies between official and personal views regarding the decision-making environments encapsulated by the case study colleges.
Instructors and mentors and others do their work by making decisions that have an impact on the educational and administrative process, but  we  should  distinguish between these decisions; some  of  them  are  related  to the material or content and some related to the method. As for material or content, it can be represented by building and organizing curricula and educational programs and the extent to which these programs and projects for the purposes of education. As for the way, it is how the manager improves his use of time and effort and to what extent he involves others in decision-making and how to work in his office.
The decision-making process encompasses many areas, including curricula, teaching methods, finance, buildings, administration, and student affairs. This process has different levels: national, local, and executive.
Pushing collaboration beyond committees
All three superintendents demonstrated highly developed insights and skills with respect to collaborative processes. They worked effectively with committees that help them make strategic decisions that appear to be in the best interests of students in their school districts.  Copland (2003) that there is a strong tendency to pull back from collaboration because it feels risky and because the organizational culture of the school district is not likely to support it well over time. What is lost in the retreat from collaborative decision making is a clear understanding of the rationales behind the decisions and a  sense  of  commitment  to  those  decisions.  Also  lost is the opportunity for meaningful distributed leadership that occurs broadly and deeply throughout school district organizations: (Elmore, 2000 Gronn, 2008).

Based on the results accumulated from the conducted  survey,   the   paper    recommends  to enhance participation of faculty members in making academic and administrative decisions more than what it has today, build appropriate administrative  environment for academic decision  making based on the use of contemporary management trends, give academic departments more powers to make academic decisions, work on the experienced participation of faculty members in strategic decision-making, minimize or at least decrease centralization by organizing training programs for academic leaders to delegate authority to principals and to promote faculty participation in academic decision making. The necessity for the participation of faulty members in decision making has already been interpreted statistically. Thus, this paper also promotes effective leadership among manager towards the encouragement of active participation of faculty members to school activities like decision-making. The primary role of teachers is to impart knowledge to students, and their direct contact with them can be a bridge for the understanding of students that leads to the betterment of the entire academe.
Decision making is probably the most important function of leadership. There is a sense within the sector that this job satisfaction exists in variable measures across the different hierarchies of decision making in the EI sector and that the top levels are  perceived  as  the  least  fair and just. It appears that in order to increase levels of participation and involvement and to raise the perception of greater justice and fairness in decision processes, research which deliberately interrogate systems and structures which contribute to structural, the social sharing of information data for decision making, fairer distribution of resources and facilities and the elimination of subtle machinations which exclude other people from effective decision making needs to be prioritized in the Saudi EI college sector Decision making process still remains highly centralized  at   the   top   and   school   managers cannot take and implement specific decisions for their schools. The schools’ decisions depend on the Ministry of Education policy,  the  Inspectorate offices recommendations, the Local County material support, the local businesses contributions and overall the students interests. All decisions in a school are made through group meetings but it is necessary to improve other professors' participations ability to take rational decisions. However, Beckner (2004) remarked that educational leaders rarely ground their decision making in ethical or philosophical theory; rather, they rely upon experiential knowledge and personal views. Ideally, theory and practice should confirm ethical leadership in the community college (Hellmich, 2007). This premise is the guiding motive of this article. With this premise in mind, this manuscript encourages community college leaders to employ four ethical paradigms (ethic of justice, ethic of critique, ethic of care, and ethic of the profession) when constructing and considering alternative courses of action in decision-making processes (Shapiro and Gross, 2008; Shapiro and Stefkovich, 2005).
In summary, it is essential that administrators at universities provide enabling structures in the form of leadership opportunities, shared decision making, and a hierarchy  that  supports   faculty  members'  performing their jobs more effectively . Future researches, to better understand the decision process; further research is needed on university leadership styles in KSA and their effect on university academic performance and ranking.