The affective commitment of academics in a university in Botswana

Research design
The study used a cross-sectional survey design. Respondents were selected from among a population of academic employees with office space at the University of Botswana. The study population was stratified into units with an average size of nine academic employees each. Large departments such as English, Mathematics and Economics that had about 25 or more academic staff were divided into three enumeration units each. Two or three academic staff members were selected from each enumeration unit. A self-administered questionnaire was distributed over a period of two weeks. Informed consent was obtained from each respondent. The study adopted a quantitative non-experimental design using a survey instrument. Both the research protocol and the study instruments were approved by the University of Bostwana's Human Subjects Review Board.
Measurement of variables
Affective commitment was measured using eight items adapted from Allen and Meyer (1990) and phrased to be meaningful in the context. For each of the eight items, a five-point Likert-type scale, which ranged from strongly disagree (SD=1) to strongly agree (SA=5) was used. The reliability of the scale was reasonable (Cronbach’s alpha = 0.79). The research protocol and instruments were approved by the University of Botswana’s Human Subjects Review Board.
Demographic and personal characteristics were measured by requesting participants to check appropriate categories. These included gender, age-group, marital status, citizenship status, academic faculty in which the respondents worked, highest academic qualification, academic rank, salary scale, etc. Attitudinal and other variables were measured using questions on a five-point Likert scale that ranged from 1 (low) to 5 (high), indicating the presence of “very little” or small amounts of the measured attitude to “a lot” or large amounts. Attitudinal and other variables included:
(1) extent of contribution to policy making,
(2) frequency of responding to emails,
(3) perception of the status of academics,
(4) satisfaction with the university management,
(5) perception of opportunities for research and scholarship,
(6) perception of the working habits of students,
(7) personal efficiency,
(8) satisfaction with the job,
(9) sense of accomplishment,
(10) acceptance of the mission statement,
(11) internal locus of control.
The scales used to measure attitudes and other variables demonstrated a good reliability (Cronbach’s alpha (α) ranged between 0.83 and 0.89).
Data analysis
During analyses, the research variable, affective commitment was converted to a dichotomous variable coded into “committed” versus “not committed” (whereby 1= affectively committed, and 0=not affectively committed). Respondents who “agreed” with positively worded statements were treated as having affective commitment, while those who “disagreed” were treated as not having affective commitment. Independent variables considered for analysis were also recoded as categorical variables. Cross tabulations were done to determine variables that were significantly associated (p≤0.05) with affective commitment using chi-square tests of association.
In order to predict the affective commitment of academic employees, variables that had a statistically significant relationship with affective commitment were included in a hierarchical multiple logistic regression procedure. The percentage of employees that were correctly reclassified by the fitted model was used as a measure of goodness of fit. This statistical technique facilitated the use of step-wise multiple-regression which showed the relative importance of the independent variables in predicting affective commitment.

The respondents comprised 164 academic employees, whose responsibilities at the university were a combination of research, teaching, service and some administrative duties. They held the following academic ranks: Assistant Lecturer (2%), Lecturer (45%), Senior Lecturer (34%), Associate Professor (9%), and Professor (10%).
Most respondents (71.5%) were males. The majority (81%) were aged 40 years or older. Some 42.7% were employed on two-to-five-year renewable fixed-term contracts that were typically held by non-citizens. Almost a quarter (24.5%) had worked for the university for five (5) years or less, while 16 % had worked for the university for over 20 years. Table 1 shows the distribution of respondents by background and other attributes. 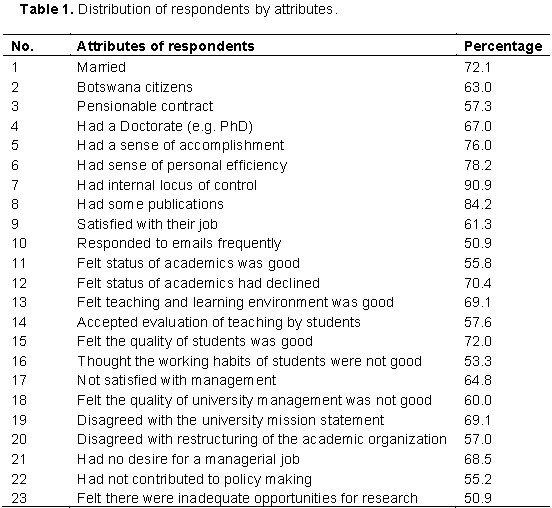 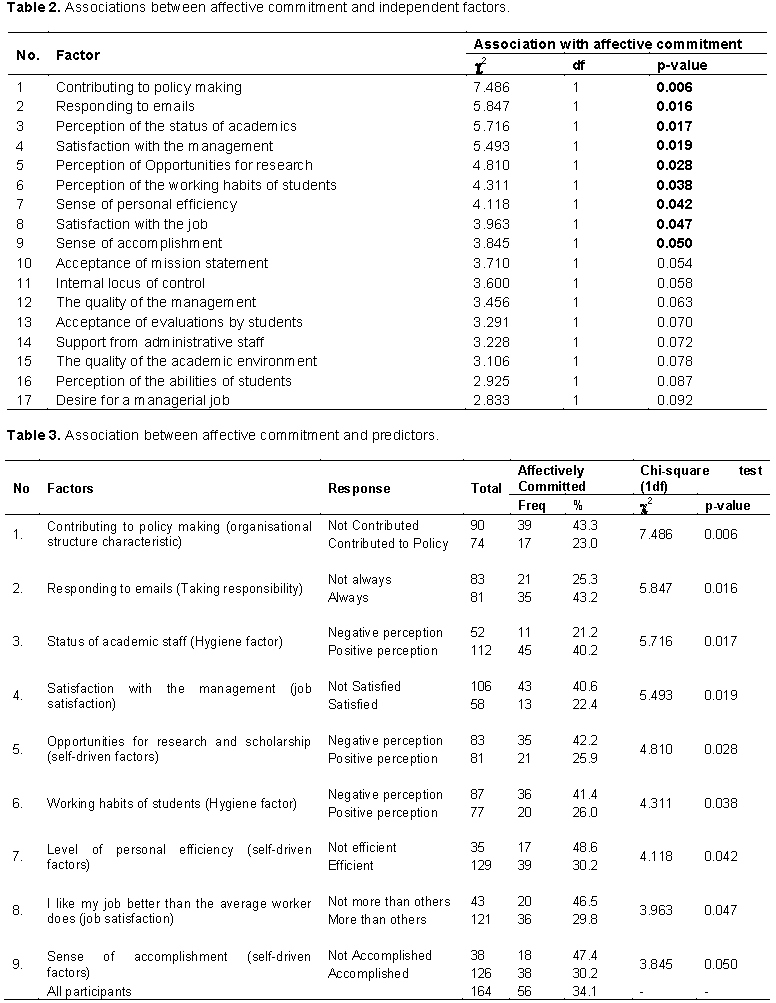 suggested by Hair et al. (2006). However, they are reported here to aid further exploration by subsequent studies since they could have statistically significant relationships with affective commitment in different and larger samples.
Predictive model for affective commitment
The nine factors associated with affective commitment were entered into a multiple logistic regression model with conditional forward likelihood criterion used for variable addition. The following three factors associated with affective commitment were retained as predictors: (a) contributing to policy making, (b) responding to emails, and (c) satisfaction with management.
Table 4 indicates that the improvement in chi-squared was significant (P<0.01) when a factor was added at each step. The percentage of case that was correctly classified as having affective commitment or not was 65.9% when satisfaction with the management was the only predictor in the model. This percentage increased to 67.1% when contribution to policy making was added as a factor, and to a further 68.3% when responding to e-mails was added as an additional factor.
A model for predicting affective commitment among the academic employees is shown in Table 5. Overall, the Hosmer and Lemeshow goodness of fit chi-squared test statistics was found to be 2.77, with six degrees of freedom, which gave a p-value of 0.837. This implies that the final model fits the data well.

Employee affective commitment remains an essential factor in key university organization outcomes such as effective teaching and research productivity. When professionals work in bureaucratic organizations, they tend to feel conflicting goals and are compelled to choose one loyalty over another (Setyowati and Suharnomo, 2017). They may have an attachment to the organization, including some of its goals, for reasons that are not related to the achievement of goals articulated by management.
Committed academic employees, effective university teachers and productive researchers may not necessarily agree with or believe in some of the policy initiates that the management may initiate and promote. The positive relationship between dissatisfaction with management and affective commitment suggests alienation of employees with a mind-set focused on what they believe is the reason for the existence of the university. More research is required to understand the different loyalties that academic professionals may have to their students, colleagues, superiors, unions, management, research collaborators, performance targets, institutional policies and the organization in general.

Like most research on organizational commitment, this study was cross-sectional and focused on statistical associations, which makes it difficult to ascertain the direction of causality. Research using experimental or longitudinal designs is needed to verify causal effects. Another limitation of the study is that the sample was collected from only one institution. It would be useful to undertake a much more comprehensive study that involves several public and private institutions.