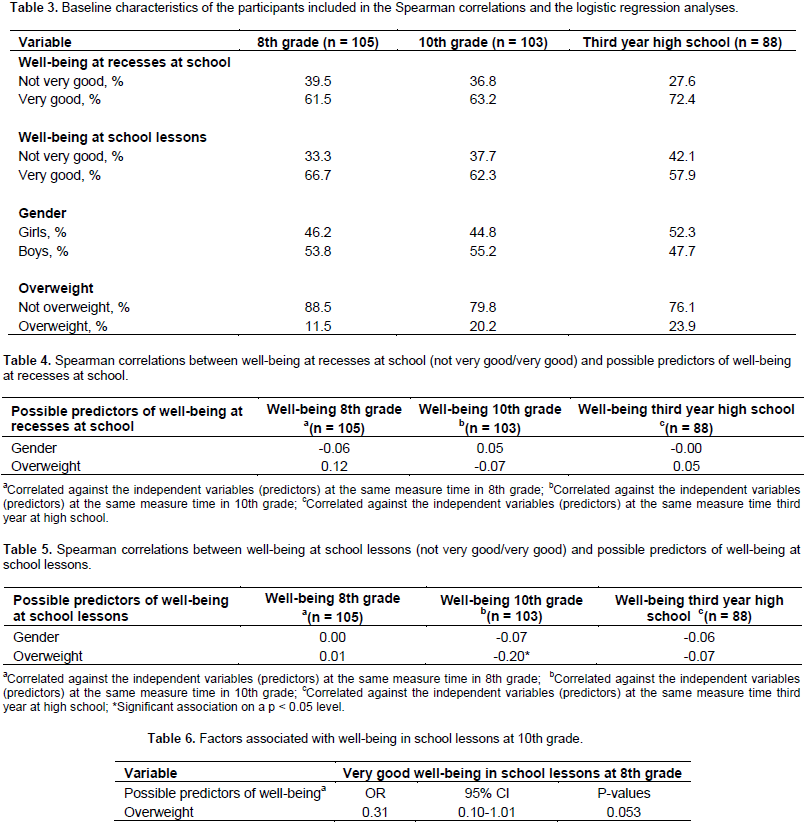 The results of our study show that the level of well-being in both recesses and school lessons is un-changed through middle school and high school, from the age of 14 until the age of 19. Furthermore, in relation to well-being at school, there is no difference between gendersand students categorized with or without overweight at 14, 16 and 19 years of age respectively. This is in line with another study among the same students, which found no group differences in well-being in physical education between girls and boys, and between students categorized with or without overweight. One might argue that the school is organized in such a way that everyone thrives. It could be determined that motivation is closely related to the experience of sharing and meaning, as argued in the introduction. Motivated students who discover their own talents are stimulated and develop in a positive direction, which can also give positive manifestations in performance and endurance, creativity, vitality, self-esteem and in general increased life satisfaction (Ryan and Deci, 2000). This is supported by the findings of Anderson and Grahams (2016) , based on a large mixed-methods study in Australia that sought the views of students, principals, teachers, and other staff about well-being at school. The findings revealed that students understood well-being in multifaceted ways, including having a say, being listened to, having rights, and being respected. Further, both students and staff identified positive associations between having a say at school, being recognized (cared for, respected, and valued), and well-being. National surveys that shows that young people who experience professional and social engagement, have ambitions and identify themselves with high school education, have an increased probability to complete high school. On the contrary, many Norwegian youths with low or lacking motivation decide to leave school or end their schooling without having completed all their subjects, and miss important ways of development, something that can have serious consequences for health and well-being later in life (Kunnskapsdepartementet, 2010; Markussen et al., 2008).
The findings in our study do in many ways confirm that the school has actually succeeded in creating exactly these fellowships of interest and value, which again results in well-being for both genders, regardless of physical form and body mass index. In terms of well-being, it might be argued that Ryan and Deci (2000) self-determination theory could be central in the extension of an interest and value fellowship, where communication and quality of participation are of high importance. Motivation is promoted for the students when the activity and the environment satisfy the following three foundational psychological needs for the students: the need for autonomy, the need for competence and the need for affiliation. In this article, affiliation is defined as a possible explanation for an above average well-being score, both in recess and in the classroom (Ryan and Deci, 2000). The teacher’s role has been given a big responsibility for the well-being of students, and well-being in general, during a short amount of time (Spurkeland, 2011). This might be a very important contribution for the positive outcome, regarding well-being in the aforementioned studies, and in the study on which this article is based upon. Relations pedagogy has in other words become a significant component to the teacher profession, and the teacher’s emotional intelligence (Spurkeland, 2011) has become an indicator for the ability to build relations. The importance of relationship when it comes to well-being, is supported by a study called “Facilitating student well-being: relationships do matter” (Graham et al., 2016). The study involved focus groups with 606 primary and secondary students and individual interviews with 89 teachers and principals, and the findings affirm the critical role that relationships play in promoting well-being in the context of schools. The relationships described as important, were both between teacher and student and between students.
We have already argued that the results from our study might indicate a good relationship between teacher and student. Our study shows no difference between genders, and between students with or without overweight. One might argue that the teacher profession during the past decades has had an increased focus on relation building, which again leads to more self-esteem and increased life satisfaction among students (Ryan and Deci, 2000). The school's role as an arena of socializing (Danielsen, 2010), by having a good relationship with the teacher, affects the students well-being. "When the students experience pedagogical care combined with self- and codetermination in the classroom, it means a lot for the motivation of students for schoolwork and positive development", according to Danielsen (2010). A study in South Australia about students’social/ emotional adjustment and academic achievement and motivation obtained data for 888 students across years 5 to 9 from 58 classes in 21 schools (Murray-Harvey, 2010). They were asked about their perceptions of relationships with family, peers and teachers as sources of stress or support at school. The results confirmed the strength of the connection between the student’s social/emotional and academic experience of school, and highlighted that both academic and social/emotional outcomes are unambiguously influenced by the quality of the relationships between teachers and students. This exert the strongest influence on well-being and achieve-ment outcomes for students (Murray-Harvey, 2010) compared with relationships within family and peers.  Another benefit of experiencing affiliation, competence and autonomy is that the student achieves a self-regulation (Danielsen, 2010), which is a central mechanism for meaningful behavior. An important component in the students’ self-regulating process is well-being at the school and an experience of feeling included in the learning environment. Perceived competence has also shown itself to have a coherence with well-being (Danielsen et al., 2009). One might assume that both learning and well-being are mutually beneficial for the student’s self-regulating initiative and involvement in learning processes (Danielsen, 2012).

The findings show that the student in general reports good and very good well-being at school during middle school and high school, from the age of 14 until the age of 19. Furthermore, the level of well-being in both recesses and school lessons is at the same level through middle school and high school. Finally, the results show that there is no difference between level of well-being, and boys and girls, and students categorized with or without overweight at 14, 16 and 19 years of age respectively. We argue that this study indicates that the Norwegian school is organized in such a way that everyone thrives. There is a lack of longitudinal studies and a lack of multivariate analyses on this topic, and the present study contributes with new knowledge. Further studies should include more subjects and possible predictors of well-being in both recesses and school lessons.