Absentee rates in physical education in high schools: The importance of gender and study programmes

Of all subjects, physical education (PE) is the one with the highest no-mark rate in high school in Norway (Rånes, 2011). There has been little research on absenteeism in PE, and understanding absenteeism in PE is limited (Jonskås, 2010). To prevent high absentee rates in PE, it is important to obtain more knowledge about factors that predict absenteeism, and more research is needed to understand how absentee rates vary among different groups. This study investigated how absentee rates vary among gender and different study programmes in high school. Although more recent research has shown that Norwegian women do exercise as much as men (Fasting and Sand, 2009), studies have also indicated that Norwegian girls seem to experience PE as more problematic and that they are less active than boys in PE (Anderssen, 1995; Hansen, 2005; Holstad, 2012; Ommundsen, 2011; Säfvenbom et al., 2014), although one study among high school students found that girls enjoyed PE as much as boys (Lagestad, 2017a).
It seems appropriate to suggest that girls may have higher absentee rates than boys in PE in high school as shown in a study by Lagestad et al. (2015). However, that study did not examine absentee rates among genders in connection to different study programmes and gender differences. Research has shown that students focusing on general studies generally have higher marks than students in vocational subjects (Støren et al., 2007), and that they respond more positively to physical activity (Rørvik, 2009). However, we do not know how absentee rates vary among the two study programmes. Statistical data have revealed that a large gender difference exists between study programmes in high school, with some programmes consisting of more than 90% girls and others consisting of more than 90% boys (Markussen, 2003; Støren et al., 2007). As we will discuss later in the text, collective factors such as different acknowledgement of physical capital may vary among girls and boys.
Identifying groups with high absentee rates makes it possible to implement actions towards the student groups that need it most. Schools represent the ideal arena for educating the youth to adopt and maintain a physically active lifestyle because attendance is mandatory, unlike sports settings. The previous discussion points to the importance of not only exploring gender and study programme in relation to absenteeism, but also investigating collective factors associated with being in the programmes with mostly boys or mostly girls. The Department of Education in Nordland County, Norway (Utdanningsavdelingen, Nordland fylkeskommune) has a data register (TP system) where information about high school students is saved. This database made it possible to examine the student absentee rates for all students at the 17 high schools in Nordland County. The aim of the study was to examine how absentee rates varied among female and male high school students, as well as how those rates varied between genders in different programmes. 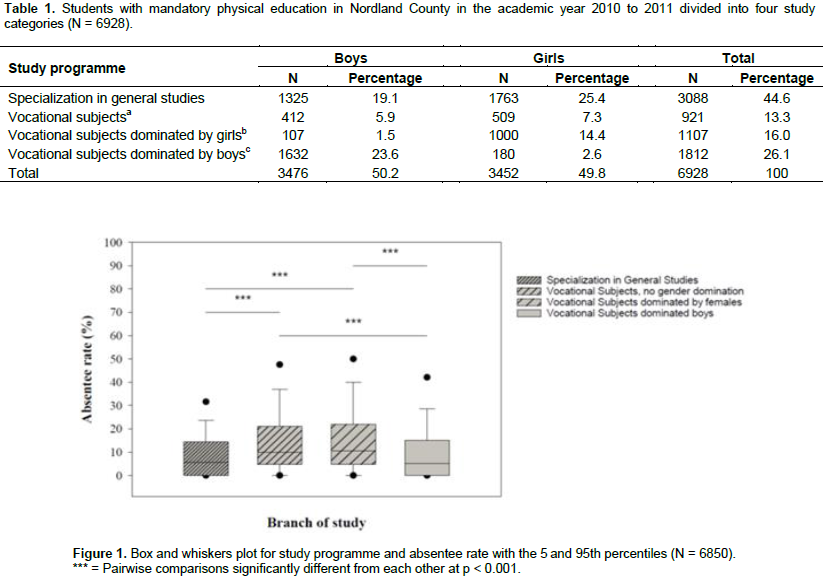 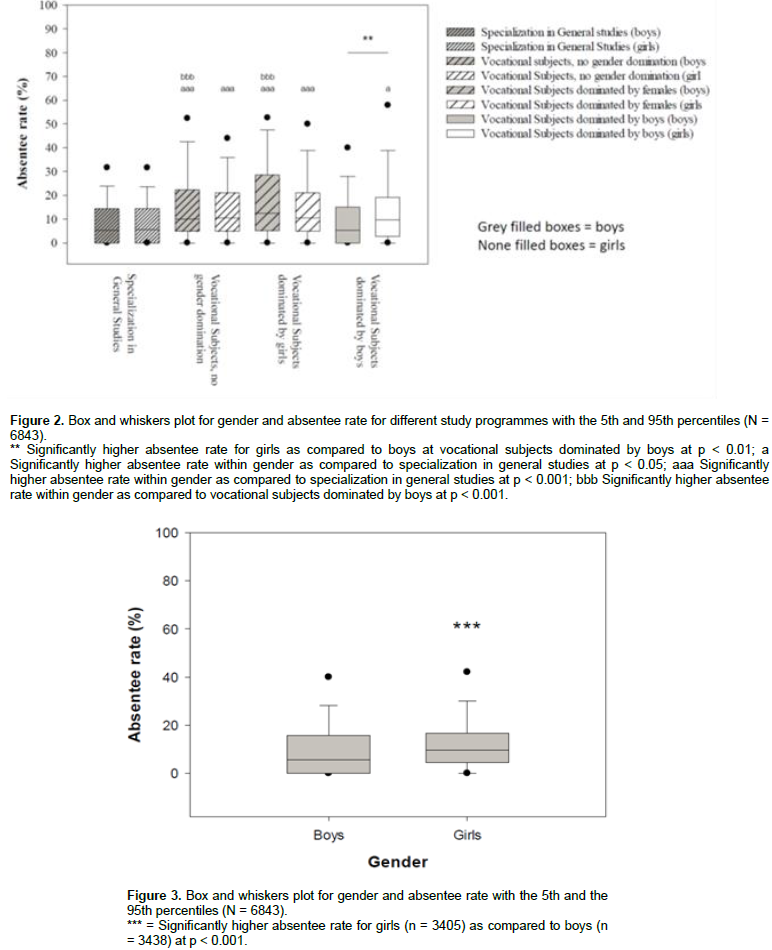 Data analysis
The distribution of absentee rates was marked leptokurtic and positively skewed, with a long tail of high values and, thus, the Kolmogorov-Smirnov test showed that the assumption of normality was not met (p < 0.001). In addition, several unusual observations with a combination of discrepancy and high leverage was found in the data. Based on the calculation of Cook´s Distance and by examining relative discrepancies in plots of Cook´s Distance versus cases, the discrepancy and high leverage influenced both the slope and the intercept strongly. Hence, the assumptions for general linear modelling were not met, and a non-parametric approach was chosen as opposed to a more preferred linear regression approach (O`Donoghue, 2012). Thus, the Kruskal-Wallis test checked for differences in absentee rates between the four categories of study. If this analysis of variance on ranks was significant, Dunn´s test was used in pair-wise comparisons. The Mann-Whitney U test was performed to check for overall differences in absentee rate between genders and for differences between genders within the four categories of study. Absentee rates are illustrated in box and whiskers plots, showing the 5 and 95th percentiles. In addition, absentee rates are given as mean (SD) within the results section. The level for significance was set at p< 0.05. Statistical analysis and illustrations was performed with Sigma Plot for Windows version 13.0 (Systat Software, Inc., San Jose, CA, USA).

There are students with high absenteeism in all categories, both boys and girls, and in all study programmes in high school. Nevertheless, we see differences between programmes which are also connected to gender. We have emphasized that it is difficult to point at one, single reason for absenteeism, because there may be different reasons in different groups of students. However, we have argued that there might be some explanations connected to social background which can influence a student’s relationship to PE, which might then lead to higher absenteeism among students in vocational studies, especially among girls. The findings may help teachers in high school identify the study programmes in which absenteeism is a major problem. To prevent high absentee rates, it is important that PE teachers should find ways to motivate their students, and the findings indicate this is especially important for students in girl dominated vocational subjects, and for girls in vocational subjects dominated by boys.
Taking Bourdieu (2000) theory about physical capital and habitus into account, we argue that in classes with mostly girls, physical capital obtained by attendance in PE may be less important and less valuable as a way in which to one may use to gain acknowledgement and recognition from the other girls.The findings support other research indicating that PE in general is still a subject that more boys than girls find attractive, but the findings also indicate that there are some programmes and groups that are more problematic than others. Hopefully, this study may contribute to knowledge and awareness about which groups need to engage in physical activity to a greater extent, and what factors influence participation levels. The study indicates that it may be of vital importance to reorganise PE in classes with vocational subjects.
Based on the findings of the present study, further research should focus on how to organise PE in such a way as to lower absentee rates among students in vocational subjects, and especially among students in girl dominated vocational subjects. Because of its objectives, PE is a subject where teaching should be, to a high degree, on the students’ terms, and where the students must get the opportunity to define what physical activity should mean for them. Only in this way can we succeed in honouring the subjects’ most important purpose, which is to promote the lifelong joy of movement by all students.