The aim of this study was to determine a correlation between the length, width and weight of otoliths and the length and weight of fish samples of Amblypharyngodon mola (Hamilton,1822), a Rasborine fish caught from Middle Ganga region. Total length (TL) measurements were made with a 1mm precision fish length measuring scale. Image J software was used for measuring otolith length and width. This study shows strong correlation between fish length (TL), otolith length (OL) and width (OW), and similarly shows the correlation between Fish weight (TW) with otolith mass   (test, P<0.05).  According to this study, Otolith size depends on the fish length and fish weight and the regression coefficients between the relationship of fish length and fish weight with otolith measurements was found to be the best indicator for estimating the growth of fish.

Amblypharyngodon mola (Hamilton,1822), commonly known as ‘Indian carplet’ or ‘pale carplet’, is widely distributed in fresh water habitats like ponds, streams, rivers, flood plain wetlands, canal, paddy fields, etc. It is an economically important small Rasborine fish and it belongs to Cyprinidae family. It can be cultured successfully in small seasonal ponds with carps and can be a good income source for the poor class. It has very high content of calcium, iron and vitamin A (Zafri and Ahmad, 1981). This fish is relished by the common man of the region in smoked, dried as well as pickled form. It also has a good  demand  as  an  ornamental  fish  in  the international market. Mola is a self-recruiting species and its culture is being encouraged among the farmers in North-East India to overcome the nutritional deficiency (Roos et al., 2002). It is a surface feeding fish with mouth directed upwards and lower jaw the longer. It is an herbivore fish, feeding mainly on algae and aquatic plants and lives in shallow water. Lateral line incomplete extending  to 15 scales, with 9 or 10 scales between it and the base of ventral fin (Jain, 1987).

The spawning season of A. mola is from February to October. The sex ratio showed a greater number of females over males but with no sexual dimorphism.

The reproductive cycle of Mola is from April to October with two peaks, one in May and other in September that is, it breeds twice in a year in both closed and open water environment. The lifespan of mola is 4 to 8 years. The maximum length of mola is 20 cm. In a study conducted in two groups of fish length<7 cm and >7 cm, a strong positive and significant length weight relationship was observed (Piska and Waghray, 1986; Gupta and Banergee, 2015).

The otolith of teleost fish is calcareous structures composed of aragonite crystals. Each individual possesses three pairs of otoliths in the inner ear. Among these Sagittae are the largest and most variable (Platt and Popper, 1981). Otoliths serve as a balance organ and help in hearing. They have been used to obtain information about the taxon, age and size of fishes. Besides age and growth determination, the study of otolith is applied in different fields such as fish biology, larval fish ecology, fish stock identification, determination of relation between fish growth and otolith growth and environmental reconstruction of fish habitat (Templemann and Squires, 1956; Mendoza, 2006; Tuset et al., 2008).

Therefore, otolith morphology is an additional characteristic among these species specific criteria (Hossucu et al., 1999). It is used in studies comparing intra-specific and inter-specific variations (Mathur, 2014; Singh, 2015). The otolith morphometric studies on the population of the species for determining the age are considerably significant (Tripple and Beamish, 1987; Campana and Casselman, 1993). It may differ between population of the same species living in different habitats (Zengin et al., 2015).

Saggital otolith was used for the study as it is the largest among this group of cyprinids. The information about the morphometry of saggital otoliths of this species is not available and only partial information  is  present for some freshwater fish species. The shapes of the otolith of fishes are complex and mostly species specific (Akkiran, 1985). Therefore, Sagittal otolith has been used as taxonomic tool for identifying fishes due to their large size.

In this study, relationship between otolith length(OL), Otolith width(OW) and Otolith mass(OM) with fish length(TL) and fish weight(TW) of Amblypharyngodon mola which is distributed in Middle Ganga region of India has been studied. This species is widespread and abundant. Its IUCN Red List Status is LC(Least concern).More research about the biology of this species is needed (Chaudhry, 2010).

There is no previous study on otolith morphology and morphometry of A. mola.

The study material consisted of 30 fish samples of species Amblypharyngodon mola (Figure 1). Fish samples were caught by local fishermen, using cast net. All the samples were collected from Middle Ganga region of Ganga river (30º-55´N, 70º-7´E), India and brought to laboratory on an ice layer (Figure 2). All the specimens were obtained from local fishermen during the period Jan 2017 to Dec 2017.Total length (TL) of fish was measured to the nearest cm while body weight was recorded to the nearest gram as total weight (TW) including gut and gonads. The morphological identification of the fish was based on a description by (Day, 1878; Jayaram, 1981; Jain, 1987). 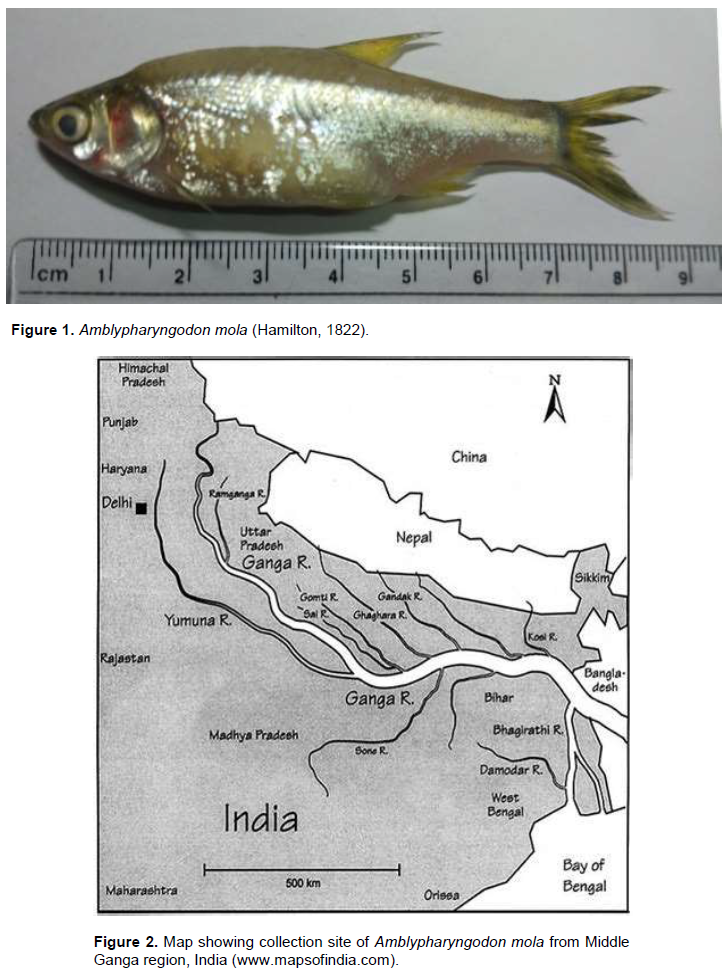 Otoliths (total of 30 individuals that is, 60 otoliths) were removed through a cut in the cranium to expose them (Brothers, 1987).

Sagittal otoliths were removed as left and right discrimination for each fish sample. Then, the otoliths were cleaned with distilled water and all the otoliths were air-dried. Each dried otolith was stored  in  plastic  vials.  The  date  and  identification  number were labeled on the plastic vials.

Sagittal otolith were photographed on ventral (Figure 3a) and dorsal side (Figure 3b) using Nikon C-DSS230 with NIS-Elements software for imaging. The magnification used for the photography was 40x and the focal length was equivalent to 35 mm. Otolith width (OW) and otolith length (OL) (Figure 4) were measured by imaging software Image J version 1.51k. Otolith length (OL) is the horizontal distance between the anterior and the posterior tips of the otolith (Harvey et al., 2000). Otolith width (OW) is the vertical distance from the dorsal to the ventral otolith edge. (Battaglia et al., 2010). Otolith mass (OM) was measured using Kab-200 precision scale (± 0.0001 g). Length, width and mass of paired otoliths were measured separately. 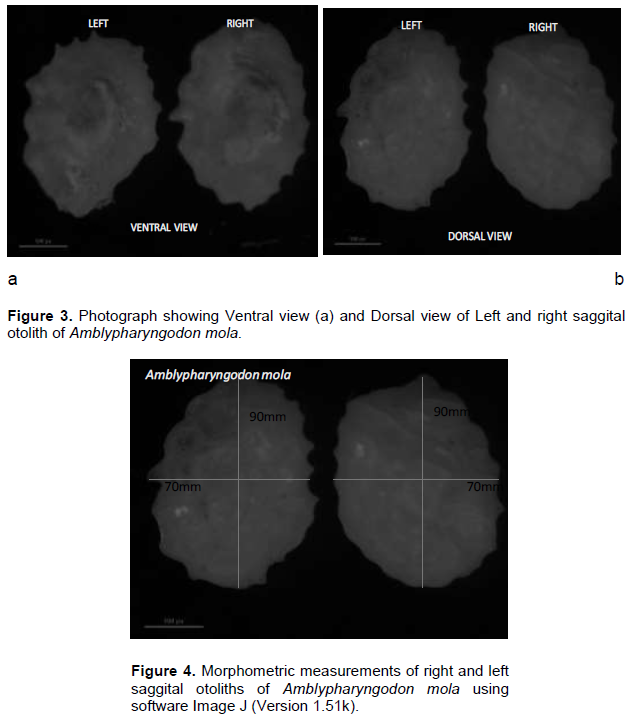 These parameters were first calculated for both left and right otoliths and t-test was used to check any significant difference between regressions. The significance of linear regressions was carried out to show correlation between fish length (TL) and otolith length (OL) and otolith width (OW), fish weight (TW) with otolith mass (OM) and all the data were statistically analyzed. 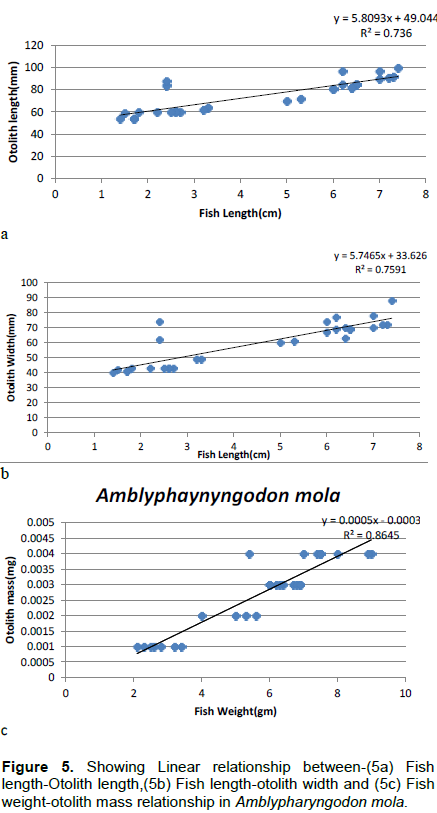 This study shows strong correlation between Fish length (TL) -otolith length (OL) and width (OW), and similarly shows the correlation between Fish weight (TW) with otolith mass (test, P<0.05).  According to this study, Otolith size depends on the fish length and fish weight and the regression coefficients between the relationship of fish length and fish weight with otolith measurements was found to be the best indicator for estimating the growth of fish.

In the present study, relationship between fish length and otolith length, width and weight was analyzed by linear regression model. Otolith dimensions and weight was linearly  correlated   to  total  fish  length  and  fish  weight (Hunt, 1992; Javor et al., 2011).The results of this study are in accordance with other studies. The first study to demonstrate a significant positive relationship between otolith size and fish size of Barents Sea Cod (Boreogadus saida) and haddock by (Trout, 1954; Templemann and Squires, 1956). In line, Harvey et al. (2000) stated positive relationship between fish size and otolith length for 63 species of fishes from the Eastern North Pacific Ocean. In the result of a study, a medium positive linear correlation between the otolith length and fish length in Chondrostoma regium (Aydin et al., 2004). This relationship is not so strong like other studies and this could  be  due  to  physiochemical  factors of water in Similarly, a single linear relationship was plotted between otolith size and fish length of the carangid fish living along the coast of the Sea of Oman (Jawad  et al., 2012). Dehghani et al. (2016) reported that fish length and otolith growth have a positive relationship and there were no significant differences between left and right otolith or between males and females in Sardinella sindensis. Saygin et al. (2017) applied power model to estimate the relationships between the otolith measurements and fish length.

The shape of otolith is regulated genetically and the otolith size is influenced by environmental condition (Lombarte and Lleonart, 1993). According to a study, the fishes from different regions have different allometric growth of the otolith (Butler et al., 1996).

The result of this study suggested that otolith dimensions increases as fish length increases and therefore otolith length can be correlated with fish growth as also observed on S.lemuru from Australia (Gaughan  and Mitchell, 2000).In a study estimated prey body size from Otoliths. Length weight relationships between otolith size (length, height, weight and aspect ratio) and fish size (total length and weight) were determined for four fish species captured in the Arabian Sea, West coast of India (Psenopsis cyanea, Pterygotrigla hemisticta, Bembrops caudimacula; Hoplostethus rubellopterus). No significant differences were noticed in the morphology of left and right otoliths of all four species. The length weight relationship of the otolith of all the four species showed a negatively allometric growth pattern (Kumar et al., 2017).

Thus, it can be concluded that, the morphometric relationships are important factor for fish biology, feeding studies, paleontology and for fish stock monitoring of Amblypharyngodon mola.