This study was conducted to assess some physico-chemical properties and yields of two micro dams (Korrir and Laelay Wukro) located in eastern zones of Tigray region (Northern Ethiopia). In each location, water samples and fish yield were examined from October 2013 to March 2014 once per month in each dams. The examined physico-chemical parameters were: Dissolved oxygen (DO), electrical conductivity (EC), total dissolved solids (TDS), water temperature, pH and transparency. The result showed that the monthly record values of DO, EC and TDS decreased while water temperature and transparency increased in studied months. Mean monthly pH value also fluctuated across months. The monthly mean value of DO, pH, temperature, EC, TDS and transparency were ranged: 3.20-7.70 mg/L, 8.23-9.14, 15.3-22.2°C, 284-353 µS/cm, 1.47-2.11 mg/L and 19.00-39.00 cm in Korrir dam while in Laelay Wukro were: 3.44-5.70 mg/L, 7.93-8.61, 19.4-24.2°C, 209-462 mg/L, 110-270 µS/cm and 18.00-40.20 cm, respectively. Fish yield was assessed by morphoedaphic index empirical models. There was no significant (p<0.05) difference in fish yield and the average estimated productivity of Korrir and Laelay Wukro dams were 13.99 and 14.47 quintal/ha/year respectively. Therefore physico-chemical properties of these micro dams were good for fish production and fish farmers should practice utilization of the micro dams through good management of the water bodies.
Key words: Physico-chemical properties, fish yields, micro dams, morphoedaphic index.

Water quality refers to all physical, chemical and biological characteristics of the water and plays an important role in the growth and survival of aquatic organisms. Relationship between water quality and aquatic productivity is a pre-requisite for obtaining optimum growth and production of aquatic organisms including fish. The water used for aquaculture and fish production would not give the  desired  production  unless the prevailing water quality parameters are optimum for the organism under culture (Bisht et al., 2013). Some of the physico-chemical parameters that are regularly measured within water bodies like pond include temperature, dissolved oxygen (DO), alkalinity, hardness, pH, electrical conductivity (EC), turbidity, total dissolved solids (TDS) and biological oxygen demand (USDA, 1996). Dissolved oxygen is required for respiration by most aquatic animals. Apart from this, dissolved oxygen combined with other important elements such as Carbon, Sulphur, Nitrogen and Phosphorous that could have been toxicants in the absence of oxygen in the water bodies to form carbonate, sulphate, nitrate and phosphate respectively that constitute the required compounds for aquatic organisms for survival (Araoy, 2009). Each species of fish has a preferred or optimum temperature range where it grows best. At temperatures above or below optimum, fish growth is affected. Mortalities may occur at extreme temperatures (Piper et al., 1982). Turbidity determines light penetration in water. This in turn will have an effect on the temperature of the water and the amount of vegetation and algae that will grow in the pond, thus affecting the rate of photosynthesis and primary productivity (USDA, 1996; Environmental Review, 2008).
The annual fish production potential of Ethiopia based on empirical methods on individual lake surface area and mean depth of major water bodies was estimated to be 30,000 to 51,000 tons (FAO, 2003). The yield of fish, season change in fish density and the factors which influence them are important for the sustainable management of fisheries in the reservoirs (Tadesse et al., 2015). Currently, government of Ethiopia is engaged in harvesting rain water for the purpose of irrigation. Thus, in Tigray, more than 70 micro dams have been constructed for enhancing food production through integrated irrigation and fish farming (Tadesse et al., 2008). The governments have a strategy to make fishery and aquaculture sector as one on the method to reduce poverty in the country.
Considerable information exists on the limnology of the natural lakes of Ethiopia but little is known about the country’s dams, rivers and reservoirs (Zenebe et al., 2012). Atakilt and Tadesse (2012) studied population dynamics and condition factor of Oreochromis niloticus L. in Korrir and Laelay Wukro dams. Tadesse et al. (2015) also reported condition factor of O. niloticus L. and yield in five tropical small and samples were collected in four months (December, 2012, March, April and May 2013). Araoy (2009) and Ovie et al. (2011) reported that monthly water physico-chemical variations have impact on fish growth and production potential. Therefore recent information on monitoring physico-chemical properties and estimating potential yields of these water bodies is useful to understand fish production potential, status, sustainability and select the most suitable way of area utilization. In this study the main physico-chemical water parameters (DO, pH, temperature, EC, TDS, transparency) and their potential fish yields of the Korrir and Laelay Wukro micro dams were examined. 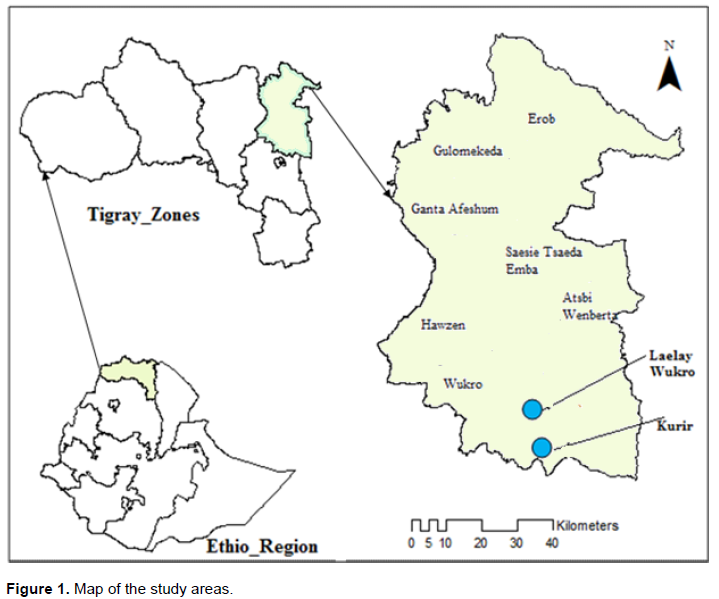 Physico-chemical properties
The main physico-chemical parameters were measured from October 30, 2013 to March 30, 2014 once per month at three representative stations in the earthen micro dams and the average of reading record was used in each month. The pH was determined with Elmetron pH meter (Model: CP-411). The pH meter was calibrated using buffer solution of pH value of 7. Electrical conductivity and total dissolved solid was determined using Elmetron conductivity meter (Model: CC-411). Dissolved oxygen was measured using Elmetron oxygen meter (Model: CCO-401). Surface water temperature was measured by Elmetron oxygen meter installed with temperature electrode. The pH, conductivity, oxygen and temperature electrodes were immersed in water 6 cm below the water surface for about 4 to 5 min until stabilized reading is obtained. Transparency (black and white disk) was measured by lowering the disk by hand into the water to the depth at which it vanishes from sight. The difference of distance to vanishing and appeared point was recorded and then divided by two.

Dissolved oxygen
The mean DO value (4.77 and 4.85 mg/L) was observed in Korrir and Laelay Wukro dams respectively and monthly DO was decreased from October to March in the dams (Table 1). Tadesse et al. (2015) reported higher average DO value 7.03 mg/L from five tropical small dams (Korrir, Laelay Wukro, Mai Nigus, Mai Sessea and Mai Seye dams). Atakilt and Tadesse (2012) also reported 7.19 mg/L average DO value for Korrir and Laelay Wukro dams for one year data which were higher than the current study results. Mustapha (2008) observed low DO concentration value due to high temperature record and high rate of decomposition in the dry season which is similar with current findings. Boyd (1979) reported that DO concentrations of 3 to 12 mg/L will promote the growth and survival of fish in reservoirs. The minimum DO of 5.0 mg/L was reported for tropical fishes by Saloom and Duncan (2005). Singh (2007) reported that the minimum concentration of DO, 4 mg/L should be maintained in fish ponds at all times. The water quality for any fish cultured in tropical region must be such that the DO concentration must not be less than 3 mg/L (Robert, 2007). Brian (2006) and Ita et al. (1995) noted that increased DO level is needed to support an increase in metabolic rates and reproduction. Dastagir et al. (2014) reported that DO requirements of any fish species varied with the age, temperature and concentration of minerals in water.

pH
The mean pH values recorded in the present study was 8.19 and 8.57 in Laelay Wukro and Korrir dams, and values fluctuated across months (Table 1). This mean values  which  was  within  the pH  range  of  6.5   to   9.0 reported by Boyd and Tucker (1998) and Ali et al. (2000) is suitable for diverse fish production. Any variation beyond acceptable range could be fatal to many aquatic organisms (Iqbal et al., 2004). Depending on species, fish can generally be vulnerable or resistant to high or low pH (Ovie et al., 2011). Warm waters develop increased pH levels during daylight by photosynthesis and pH declines by the process of respiration at night (King, 1970).
Water temperature
The mean temperature record value (20.07 and 21.98°C) was increased across months in Korrir and Laelay Wukro dams respectively which were within range (20-30°C) reported by Boyd (1990). Atakilt and Tadesse (2012) found 18.88°C average temperature value for Korrir and Laelay Wukro dams for one year data. The above temperature range can still be considered as good for growth and body metabolism of the fishes in the water body. This is because intensity of metabolism of warm water fish is closely associated with water temperature, that is, the higher the temperature, the higher the metabolic rate (Ovie et al., 2011). Variations in water temperature in the dry season can be attributed to intensified heat radiation and effect of harmattan (Olele and Ekelemu, 2008). Bishat et al. (2013) observed wide fluctuation in temperature in earthen pond, cemented ponds and open water body might be due to variation in volume of water.
EC
EC with mean value 284 and 358 µS/cm in Korrir and Laelay Wukro dams was consistent with the range 20 to 1500 µS/cm reported by Boyd and Tucker (1998) and Ali et al. (2000) for natural waters but higher than the value 201.56 µS/cm reported by Tadesse et al. (2015). The EC values observed decreased in the studied months. Roshinebegam and Selvakumar (2014) reported the higher EC value in some water bodies may be due to low flow of water, reduced volume and stagnation of water.
TDS
Mean TDS value (169 and 194 mg/L) was obtained in Korrir and Laelay Wukro dams respectively (Table 1). Tadesse et al. (2015) reported lower average TDS value of 101.28 mg/L from five tropical small dams (Korrir, Laelay Wukro, Mai Nigus, Mai Sessea and Mai Seye dams). A maximum value of 400 mg/L of TDS is permissible for a diverse fish population (Alikunhi, 1957). TDS concentration below 200 mg/L promoted even healthier spawning conditions (Deepak and Singh, 2014). Imoobe and Oboh (2003) and Olele and Ekelemu (2008) stated the higher TDS value in water bodies during dry season may be due to the evaporation of water and leaving a higher concentration of salt within a smaller volume of water.
Transparency
The mean transparency values were 28.17 and 29.55 cm in Korrir and Laelay  Wukro dams respectively which were lower than the value 39.75 cm reported by Tadesse et al. (2015) in five tropical small dams. Boyd (1982) reported the range (15-45 cm) for fish growth. Mustapha (2008) reported the range of Secchi disc visibility to be between 62 and to 162 cm which are higher compared with the current study results. These values reflect the depth of light penetration which is good for a shallow reservoir as plankton growth thus making food available to fish. Monthly transparency record value was increased from October to March in the dams. Mustapha (2008) and Sachinkumar Patil et al. (2013) reported that the increase transparency during dry season in water bodies may be due to gradual settlement of suspended particles at the bottom of the reservoir.
Table 2 show potential yield estimated of the dams. Results showed the lowest production yield (8.81 and 11.24 kg/ha/year) was obtained by Henderson and Welcome (1974) while highest production values (20.76 and 18.92 kg/ha/year) were according to Marshal (1984) models for Korrir and Laelay Wukro, respectively. The average of three empirical yield models were 13.99 and 14.47 quintal/ha/year which were higher than fish yield value (4.35 and 4.53 quintal/ha/year) according to Schlesinger and Regier (1982) model reported by Tadesse et al. (2015) in the Korrir and Laelay Wukro dams respectively.