Assessment of stomach contents of Oreochromis niloticus from the Lagos Lagoon, Nigeria

Public unawareness of the benefits obtainable in aquatic environment, and uncareful use and management has considerable adverse influence on aquatic ecosystems, especially in Sub-Saharan, Africa. Lagos City is urban environment around the coast. The urbanization status has been considered to have tremendous tendencies of introducing contaminants into the aquatic ecosystem. This could result in degradation of the physico-chemical parameters of the water body; hence affecting optimum yield   of    the    aquatic    resources  (Oribhabor,   2016). Therefore, the socio-economy status of the Lagos city and indiscriminate disposal of waste / pollutant have resulted in anthropogenic input, affecting the aquatic ecosystem output and ecosystem services (Sankoh et al., 2013). Investigation of stomach contents of O. niloticus fish is carried out to know the status of food available for optimum production in Lagos Lagoon. Oreochromis niloticus also known as Nile tilapia belongs to the family Cichlidae, which is a tropical freshwater and estuarine species  of  high  economic importance and a generalized omnivore. It thrives well in shallow, still waters ,and in vegetated areas of lakes and rivers (Picker and Griffiths, 2011). It is a herbivore that feeds on phytoplankton, trapping plankton in a plankton rich bolus using mucus excreted from their gills (Rupinder et al., 2014). It consumes periphyton as well as aquatic plants. It eats invertebrates, benthic fauna, and at times found to have consumed fish eggs (Trewavas, 1982; FAO, 2012). O. niloticus exhibits suspension filtering feeding method, and also surface grazers (Lee et al., 2018). Agumassie and Mathewos (2018) mentioned that Tilapia fish shifts feeding behavior.
Earlier studies conducted by Moriarty and Moriarty (1973) and Pinka et al. (2014) showed that O. niloticus feeds on bottom deposits derived from the plankton rain and other sources, deriving its nutrient from organic particles and micro-organisms (Kumar and Gopal, 2015). Rupinder et al. (2014) reported that O. niloticus feeds on plankton which is structured and usually driven by nutrient dynamics of the habitat. Tesfahun (2018) stated that the feeding habit of O. niloticus and stomach contents  are dependent on availability and abundance of plankton in the habitat, which contribute to the growth rate of the fish.
Hence, the objective of the study on stomach contents aims to reassess the status of O. niloticus food variet(ies)  in a lagoon that is impacted by urban activities and varying complex environmental factors for optimum production of the fish.

The brackish water Lagos Lagoon (Figure 1) is part of the continuous system of lagoons and creeks that are found along the coast of Nigeria from the border with  the  Republic  of  Benin  to Niger-Delta. This lagoon bordering the Lagos Island is located between longitude 30° 10' and 30° 4' SE and latitude 60° 5' and 60° 36' N. Lagos lagoon lies along the coast for more than 50 km long and 3 to 13 km wide. It is bounded by tidal wetlands and swamps, and is a major lagoon among 10 other lagoons along the coastline. The Lagoon has a surface area approximately 6,354.7sq km, and it receives influx of freshwater from several rivers, the most important of which are the Ogun, Ona/Ibu, Oshun, Shasha and Oni. It is tidal in nature and it receives water from Atlantic Ocean during high tides which recede during low tides. Lagos Lagoon is fairly shallow with averages depth of 2 to 4 m and it is isolated from sea by beach barrier ridges. The lagoon empties inside the Atlantic Ocean via Lagos Harbour where it has depth increase of 10 m, with 0.5 to 1 km width and 10 km long, (Badejo et al., 2014). 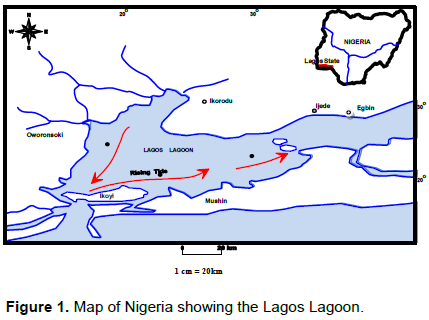 A total of four hundred and eighty (480) live Oreochromis niloticus were collected from Lagos Lagoon with the assistance of fishermen using cast net from January to December 2015. The fish were carried in a 25 L plastic container for analysis in Fish Biology Laboratory for analysis.

The Standard Lengths (SL) of fish samples were determined to the nearest 0.01 cm using a graduated board; and the corresponding weights (W) were also measured with Mettler Toledo electronic weighing balance (Model; PB8001).

The fish were dissected to remove gut samples which were dissected individually to reveal the condition of the stomach. The guts and intestine contents were categorized based on degree of fullness as: {full (4/4), three quarter full (3/4), half full (2/4), one quarter full (1/4), and empty (0/4)}. The stomach contents were fixed in 4% formalin prior to examination. Stomach samples were mixed with 2.0 mL distilled water in a petri-dish for proper separation and easy identification. A drop of the prepared sample was placed on  a glass slide with the aid of  a  dropper  and covered with cover slip.

The prepared samples on the glass slides were viewed under light microscope at a magnification of x40. Stomach items were also examined using hand lens (magnifier). The observed organisms were identified using identification keys, and taxonomic work (Idodo, 2002).
Analysis of stomach contents

The percentage numerical index of occurrences was expressed to know the food item in stomach of O. niloticus fish samples.  The percentage occurrences of organisms were recorded according to Hyslop, (1980) and Costal et al. (1992).

The stomach contents of O. niloticus  included phytoplankton, insect parts, plant parts, sand grains and some unidentified food items. Table 2 shows percentage occurrence of stomach contents of O. niloticus from the lagoon. Phytoplankton ranked highest in occurrence of food items in the stomach of the fish with a percentage of 62.32%.

Table 3 shows the degree of stomach fullness of the fish samples. This indicated that 70% of O. niloticus stomach revealed half full and above degree of fullness. Hence, it is an indication of food availability in the brackish environment.

From Table 4, Ppercent frequency of occurrence revealed that plant parts was the highest (93.13%) and also dominated the food items with a value of 58.54%. Cyclotella meniggniana species, which is a Bacillariophyceae ranked second desired food item (51.88 %); while Dinophyta Ceratium sp. ranked third (35.92 %) desired food item from the environment. This indicated all food items on rank list were plant source. 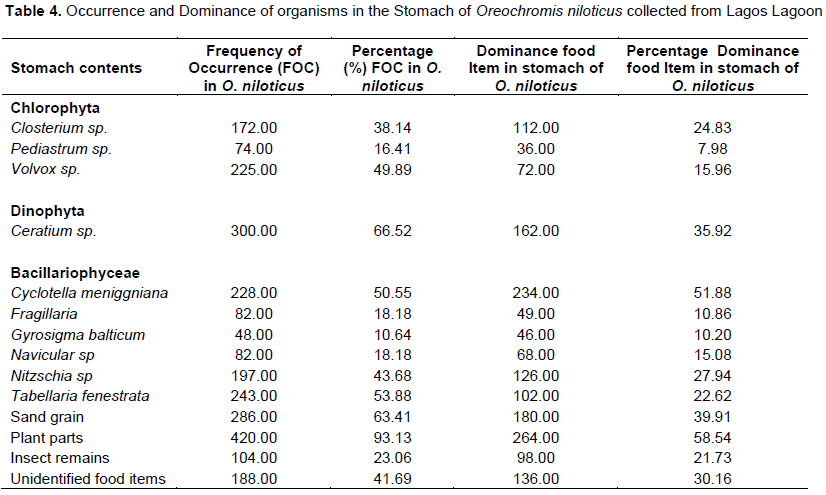 The results in Table 5 identified Bacillariophyceae as the most desired food item (R.I = 4.08) and admist all the methods used, it is indicated that Bacillariophyceae had highest presentation, in  species  occurrence. This revealed similar output of the varying methods used to assess stomach contents of the fish. The least desired food item is insect remain which has (R. I = 0.04). 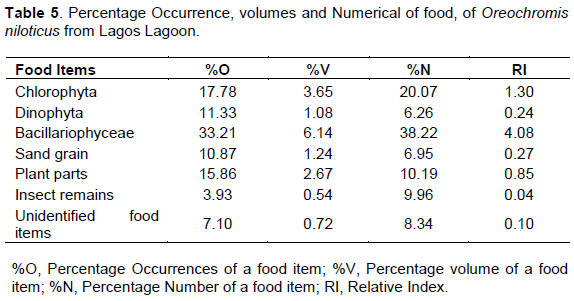 Figure 2 shows the percentage occurrence of food item in   the  stomach  of  Oreochromis  niloticus  from   Lagos Lagoon. Bacilleariophyta were the highest (38.22%) . Iindicating that the fish highly desired theis food item. Bacillariophyta species were highest  in occurrence of food items identified; hence the result revealed that O. niloticus is a generalized grazer with higher relative index recorded in plant source food items (Figure 2). 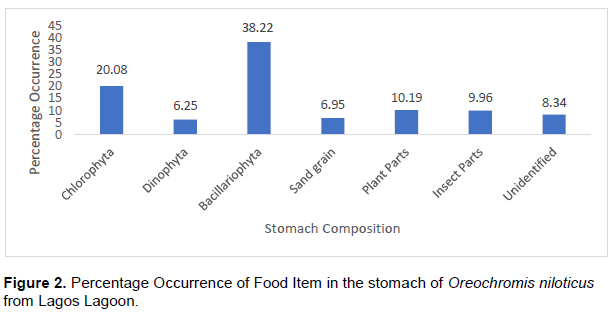 Stomach contents in Oreochromis niloticus fish samples examined is in line with the work of Agbabiaka (2012) and Rini (2013) which reported Tilapia fish have varying food in its gut and shifting feeding behavior. These food contents seen in the stomach of the fish follow the work of Abari et al. (2015) who reported O. niloticus as obligate herbivore.

High desire of Bacillariophyceae by the fish is supported by Mohsen (2003) as Bacillariophyceae constituted 38.22% of the food items and the most prevailing food items, but plant parts had the highest percentage dominance food item (58.54%); while Bacillariophyceae Gyrosigma balticum had the least (10.20%). Hence, stomach contentsobtained corroborate the reports of Fagade and Olaniyan (1972) in the Lagos Lagoon;  Houehanou  et  al.  (2016),   who   reported  that cichlids exploit more than one source of food item; having the ability to utilize different varieties of food makes O. niloticus omnivorous in nature. He et al. (2015) also reported high degree of overlap in diet of fishes from the same community.

The work of Rao (2017) supported the report that cichlids fed mainly on detritus, insects and plant materials; as seen in the result of this study that other unidentified food items, plants and insect materials identified from the gut of O. niloticus are members of its stomach contents. Ali et al. (2015) also supported the result that the species feed on plants, leaves, buds and seeds of water lilies and are thus herbivorous feeders.

The result that O. niloticus had higher frequency of plant material is supported by Oso et al. (2006) who also observed O. niloticus to be herbivores having highest percentage frequency of occurrence of higher plant remains as 49.2 %. O. niloticus preference for diatoms than the green algae, despite the latter being more abundant is in line with the work of Kariman et al. (2009) who  reported  diatom  preference  in  the  nutrition  of  O. niloticus in Abu-Zabal lakes in Egypt.

Teferi et al. (2000) who studied the food and feeding habit of Nile tilapia in Lake Chamom Ethiopia on the stomach contents of adult and juvenile fish reported that O. niloticus fish is phytoplanktivorous, and that the component of the phytoplankton varied seasonally, and Ali et al. (2015) also reported that Nile tilapia are filter and benthic feeder as they consumed plankton, and detritus. These supported the result that the fish is planktivorous in the food item recovered from the stomach contents examined.