Free radical-induced damage plays a significant role in the development of type 2 diabetes and its complications. Extracellular superoxide dismutase (EC-SOD) or SOD3 is one of the important scavenger enzymes that protects against oxidative damage and the formation of free radicals. EC-SOD is a copper- and zinc-containing secretory enzyme located in tissues and primarily in the extracellular matrix. EC-SOD has been proposed to protect against pancreatic beta-cell damage, insulin resistance and vascular function in diabetic patients. The association between EC-SOD gene polymorphism and Type 2 diabetes mellitus is not completely understood. The aim of the study is to investigate the EC-SOD gene polymorphism in the exon 3 region and the susceptibility to type 2 diabetes mellitus and its complications among Lebanese patients. For this purpose, a genotype analysis involving 60 Type 2 Diabetes patients and 46 control subjects was carried out using PCR-based direct DNA sequencing. Results showed that the frequency of the Ala40Thr polymorphism of EC-SOD gene was significantly higher in type 2 diabetic patients compared to control group.  Evaluation of clinical parameters of diabetic patients with their relative genotypes showed that patients with the Thr allele have higher HbA1c levels and fasting blood glucose compared to their Ala genotypes indicating a poor diabetes control in these patients. When diabetic complications including retinopathy, nephropathy and cardiovascular complications were correlated with Ala40Val polymorphism, a significant association was detected for complications and particularly for cardiovascular diseases in diabetic patients.

Oxidative stress characterized by elevated concentration of reactive oxygen species (ROS) contribute to tissue damage and is associated with the development of various diseases including cancer, hypertension, diabetes, atherosclerosis, inflammation, and premature aging (Rahal et al., 2014). Organisms have developed a variety of antioxidant defenses with specialized antioxidant enzymes that include the superoxide dismutases (SODs) (Zelko et al., 2002). SODs are the first important line of antioxidant defense   systems  by eliminating damaging ROS from the cellular environment (Fukai and Ushio-Fukai, 2011). Extracellular superoxide dismutase or EC-SOD is the predominant SOD in extracellular matrix, it is anchored to the extracellular matrix (ECM) and cell surfaces through an interaction with heparan sulfate proteoglycan and collagen (Fattman et al., 2003). EC-SOD is a homotetrameric copper- and zinc-containing glycoprotein found in pancreas, skeletal muscle and particularly abundant in blood vessels. The human EC-SOD gene is located on chromosome 4p16.3-q21 and consists of three exons. EC-SOD protects various tissues from oxidative stress by catalysis of dismutation of two superoxide radicals to hydrogen peroxide and oxygen (Folz and Crapo, 1994). In addition, EC-SOD plays an important role in preserving nitric oxide (NO) function from superoxide anion in extracellular space (Dong et al., 2014; Jung et al., 2003).

A number of diseases, including vascular-related diseases atherosclerosis, hypertension, diabetes, lung diseases, and inflammation have been associated to EC-SOD (Chistyakov et al., 2001; Fattman et al., 2003; Naganuma et al., 2008). EC-SOD gene is suggested to play a role in the development of type 2 diabetes and/or its complications. EC-SOD plasma concentrations were impaired in Japanese type 2 diabetic patients (Adachi et al., 2004; Yamada et al., 1997). Knockout mice EC-SOD suffer from a delayed recovery of hypoglycemia (Sentman et al., 1999). The implication of EC-SOD polymorphism with type 2 diabetes mellitus is not fully understood. It has been shown that a missense mutation (C to G) that results in arginine 213 glycine substitution in the heparin binding region is not associated with type 2 diabetes (Tamai et al., 2006; Ukkola et al., 2001). Another single study limited to Japanese population proposed that a missense mutation (A to G) that results in amino acid substitution (Alanine 40 to Threonine) can increase the risk to type 2 diabetes (Tamai et al., 2006). From our knowledge, no previous studies have focused on the association of EC-SOD polymorphism with susceptibility to type 2 diabetes in other populations than the Japanese population. The present study aims to examine the genetic polymorphism in the exon 3 of EC-SOD gene among Lebanese population, and to study its association with the susceptibility to type 2 diabetes mellitus and its complications.

This study employed a case-control design. Sixty unrelated Lebanese patients from different regions of Lebanon  who  meet ADA’s criteria for a diagnosis of diabetes were recruited from Al Rai and Egyptian Military Hospital for one year prior to this study. An informed consent was obtained before collection of their blood samples according to the ethical board regulations. Diabetic patients included 27 males and 33 females, their ages ranged between 37 and 80 years, with a mean age of 59.63. All patients were following a blood glucose control drug regimen. Demographic and clinical characteristics for patients are shown in Table 1. The mean duration of diabetes was 11.3 ± 7.8 years. Assessment of clinical manifestations of diabetic complications was based on patient’s medical records. Retinopathy was the most common complication among diabetic patients (15 cases) while nephropathy was the least common complication among diabetic patients enrolled in this study (5 cases). The mean blood glucose level was 177.2 ± 1.18 mg/dl and the main HbA1c was 7.86 ± 1.18%. As non-diabetic control, forty six randomly selected unrelated healthy individuals were chosen using the following criteria: age ranges between 35 and 70 years, no history of genetic diseases or family history of diabetes mellitus, HbA1c < 5.6%, fasting blood glucose < 100 mg/dl, absence of comorbidities (hypertension, hyperlipoproteinemia). This group consisted of 19 males and 33 females, with mean age of 60.03. 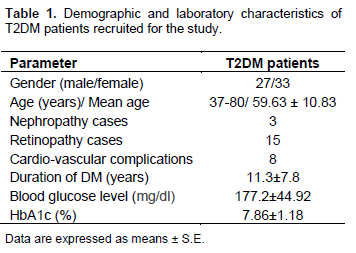 Detection of the EC-SOD polymorphism

The analysis of the EC-SOD genotypes was performed by polymerase chain reaction (PCR) followed by DNA sequencing. The following primers were used: Forward primer: 5’- CGTGACTAAGCCTCACTCTGC -3’, reverse primer 5’- ACTTCAGCAAAGGCGAAGGT -3’. DNA samples were amplified by PCR using 100 to 200 ng genomic DNA as an initial template. A 905 bp PCR product-covering exon 3 in the EC-SOD gene was amplified (Figure 1). The PCR assay was carried out using a REDTaq ReadyMix PCR reaction mix containing MgCl2. The PCR reaction mix final volume was  40 µl  and included 0.3 μM of each primer. The PCR program consisted of an initial denaturation for 5 min at 94°C, followed by 38 cycles of denaturation at 94°C, annealing at 58°C for 90 s, and extension at 72°C for 60 s, with a final extension at 72°C for 10 min. The PCR products for each sample were examined using 1% agarose gel electrophoresis. 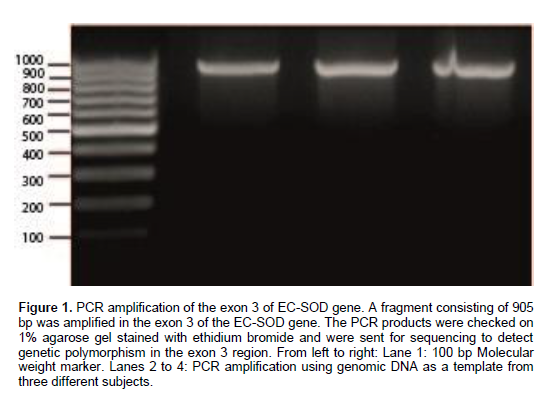 Data was analyzed using the statistical package SPSS (version 19). All values are represented as mean ± standard deviation (SD). The differences in genotype and allele frequencies between the cases and controls were tested using the chi square test. Differences in variables between normal and diabetic groups were performed by independent student’s t-test. One-way analysis of variance (ANOVA) test was used to compare the effect of the gene polymorphism on continuous variables. The odds ratio (OR), 95% confidence interval (CI), and the corresponding p-value were calculated to describe the strength of the association. Associations were considered to be statistically significant if the Fisher’s exact p-value was less than 0.05 and if the 95% CI excluded the value 1.0.

In order to investigate the association of EC-SOD genetic polymorphism with type 2 diabetes mellitus, 60 patients and 46 unrelated healthy subjects were recruited from different  regions  of  Lebanon. Screening polymorphisms in exon 3 of the EC-SOD gene was conducted by PCR amplification of a 905 bp covering the region followed by Sanger DNA sequencing (Figure 1). Two SNPs were investigated in this region: rs8192291 (a C to T silent mutation where Leucine remains unchanged) and rs2536512 (A to G missense mutation resulting in Alanine 40 threonine substitution). These SNPs were analyzed for their distribution and association with the risk to T2DM among Lebanese population. Results showed that Leu53Leu missense mutation was uncommon among Lebanese population; for instance homozygote Leu genotypes (TT) were not detected, low frequency was observed for the T allele compared to the C allele (0.261 and 0.869, respectively) (Table 2). No significant association was found with type 2 diabetes (OR = 1.04 (0.4457 to 2.4432); p-value = 0.724). As for the alanine 40 threonine substitution, all the three genotypes were detected at different frequencies among Lebanese population (Table 2). The distribution of genotypes followed Hardy–Weinberg equilibrium for controls; however they deviated from Hardy-Weinberg for T2DM patient cases. The frequency of the Thr Allele increased in T2DM patients (0.392 in control groups and 0.467 in diabetic patients). The Ala40Thr SNP was found to be significantly associated with T2DM at a p-value = 0.02 and OR = 1.3 (0.6895 to 2.5364) (Table 2). 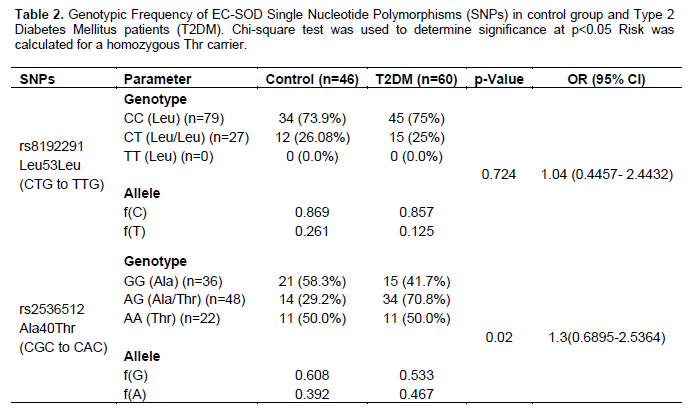 The clinical characteristics associated with Ala40Thr genotypes were examined in T2DM patients. Mean blood glucose levels and mean HbA1c levels were compared between the different EC-SOD  Ala40Thr  genotypes  of T2DM patients. Interestingly, fasting blood glucose levels and HbA1c levels were significantly higher in heterozygous Ala/Thr genotypes and in Thr homozygotes genotypes when compared to Ala homozygotes (p < 0.001 and p = 0.003, respectively) (Table 3). Indeed, the presence of a G allele increased significantly fasting blood glucose levels from 144.60 ± 29.40 mg/dl for the Ala homozygote (AA) to 181.09 ± 43.11 and 209.64 ± 41.97 mg/dl for the Thr heterozygote (AG) and Thr homozygotes (GG), respectively. Similar to that, a significant increase in HbA1c levels was observed for the Thr carriers (7.05 ± 0.82 for Ala homozygotes (AA) compared to 7.99 ± 1.33 and 8.55 ± 1.28 for Thr heterozygotes (AG) and homozygotes (GG), respectively) (Table 3).

Thr allele is significantly associated with the development of diabetic complications

The present case-control study explored the association between EC-SOD genetic polymorphisms and susceptibility to Type 2 diabetes mellitus in the Lebanese population. This association was the subject of limited studies to Japanese population (Naganuma et al., 2008; Tamai et al., 2006). It was shown that allele frequencies differ greatly among ethnic groups and that data from several studies showed ethnic variations in the interpretation of disease risk associated with genetic polymorphisms. Two genetic polymorphisms Leu53Leu and Ala40Thr were investigated. The frequency for Leu53Leu was largely similar to frequencies of population reported in literature and SNPs database at the National Center of Biotechnological Information (dbSNPs) (Lebanese population: C allele 0.869, T allele 0.261, all populations: C allele 0.848 T allele 0.152). As for the Ala 40 Thr genotypes, allele frequencies of the Lebanese population was similar to that published for European population rather than the rest of the populations (Lebanese: A allele is 0.392, G allele 0.608; European A allele: 0.383, G allele: 0.617). These frequencies differed in fact from the one published for the Japanese study (A allele 0.241 G allele: 0.759) which was similar to sub-Saharan African population (A allele 0.3 G allele: 0.7 (Tamai et al., 2006).

The present study showed a significant association between EC-SOD Ala 40 Thr and type 2 diabetes mellitus among Lebanese population as the one seen for the Japanese population. However, by contrast to the Japanese study, the present study showed  a  significant association between EC-SOD Ala40Thr polymorphism and the exacerbation of clinical biochemical parameters particularly for the fasting blood glucose and HbA1c levels. It is not yet clear how this polymorphism impairs blood glucose response. The Ala substitution to Thr is at the N-terminal of the protein and most probably affects the oligomerization state of the EC-SOD protein leading to its accumulation in the extracellular region and the exacerbation of diabetes and its complications (Carlsson et al., 1996; Stenlund et al., 1997). The present study investigated the frequency of Ala40Thr polymorphism and the development of diabetic complications. Our results showed a higher frequency of Ala40Thr genotype in the development of diabetic complications to a significant level for cardiovascular diseases and diabetic nephropathy but not diabetic retinopathy when Thr/Thr genotypes were compared with Ala/Ala or Ala/Thr genotypes in type 2 diabetic patients. This is in agreement with previous results that showed that EC-SOD is an important marker for diabetic vascular complications and nephropathy in Japanese population (Naganuma et al., 2008; Tamai et al., 2006; Tan et al., 2015).

Individuals with the Ala40Thr EC-SOD genotype are at increased risk in developing type 2 diabetes and mainly for cardiovascular complications. Ala40Thr genotyping is a possible marker for type 2 diabetes prediction, and for monitoring disease progression. Further studies in larger population samples are recommended to explain and confirm these findings.

This study was approved by the Ethics in Research Committee at the University and was conducted according to the Ethical Principles for Medical Research Involving Human Subjects of the World Medical Association Declaration of Helsinki. Written informed consent forms were obtained from all participants.

The authors would like to express their gratitude to Professor Rajaa Fakhoury for the help she provided for the completion of this work.