The performance of artificial insemination delivery system in Amhara, Oromia, SNNP and Tigray Regions of Ethiopia

The study was conducted in Amhara, Oromia, Southern Nations Nationalities and Peoples and Tigray regions of the country to provide information on the performance of Artificial Insemination (AI) service delivery system, its seasonality and effectiveness. Semi-structured questionnaire was prepared to interview AI technicians (on their performance and related issues) and farmers (about the outcome of AI services). Data on field performance were received directly from AI technicians using a pre-restructured reporting format. A follow-up calving survey for AI services were provided to farmers was conducted in March 2019 to know the outcome of insemination services provided to farmers. Peak season falls from August to December when AI technicians on average perform 6.7 inseminations per day. January, February, June, and July were categorized as regular season with daily average insemination of 3.8. March, April, and May are off-season with an average of only 2.2 inseminations per day. The seasonal variation is mainly associated with availability of feed. Field level actual performance data showed significant difference (P<0.05) in the number of inseminations provided per AI technician per month among regions and between male and female AI technicians with an overall average insemination of 39.3. The highest AI services reported in the month of October. The Service per Conception (SPC) reported by AI technicians was not significantly different among regions (P>0.05) with mean SPC of 2.13. About 2.6 SPC obtained from a follow-up survey conducted with farmers who received AI service in a specified period. About 62% conception rate and 82% calving rates are obtained in this study.

In a country, such as Ethiopia, where there is huge cattle population, the dairy sector can significantly contribute to the wellbeing of the dairying households, the nutrition of consumers, and the economy of the country at large. However,   the   sector    is    challenged    by    technical, infrastructural and policy constraints (Wytze et al., 2012). With the available 60.4 million cattle population (CSA, 2018), the country is not self-sufficient in milk production, rather it has been investing a significant sum of foreign currency for importing milk and milk products.

To fill the gap between demand and supply, improving the productivity of dairy cattle through genetic improvement is of paramount importance. As proven in many countries, an effective and efficient strategy to improve dairy cattle productivity is to breed dairy cows using proven semen via Artificial Insemination (AI).

Though it is now close to seven decades since crossbreeding activities started in Ethiopia, the proportion of both hybrid and exotic breeds is not greater than 2% out of 60.4 million cattle population (CSA, 2018). This indicates a crossbreeding program that has been implemented in the country over the last several decades through the application of AI technology is quite ineffective (Nuraddis et al., 2014). This can mainly be justified by the availability of an insignificant proportion of crossbred cattle population. One major factor contributing to such inefficiency is the very low conception rate and the accompanied high age at first calving ranged between 34 months (Hunde et al., 2015) and 44 months (Effa et al., 2006).

AI is predominantly provided by the government with a highly subsidized price (less than 10 birr or 0.4 USD) from the public side. The private sector involvement both in terms of input supply and service delivery is not significant as compared to other East African countries such as Kenya (Dickson et al., 2018). Several contributing factors are mentioned in various reports (Gebregiorgis et al., 2016; Tessema and Atnaf, 2015; Zerihun  et    al.,   2013;   Desalegn  et  al.,  2009) for  the inefficiency of AI service delivery system in the country. The main reasons for this include lack of the necessary inputs and equipment, unreliable supply of liquid nitrogen, poor quality of semen, Moreover, lack of proper record-keeping at farm level is also be considered as an important factor affecting the country’s dairy cattle breeding and improvement. Though several scholars tried to identify major factors for inefficient AI delivery system in different parts of the country, the performance of the AI delivery system is not quantified sufficiently. Therefore, the objective of this study is to provide information on the performance of AI delivery system in terms of the number of inseminations, service per conception, conception rate and calving rates.

The study was conducted in Amhara, Oromia, Southern Nations Nationalities and Peoples (SNNP) and Tigray Regions. These regions were purposively selected due to their potential for dairy production and huge government and other development partners’ efforts in improving the dairy sector in these regions. About 16.1, 24.4, 11.9 and 4.8 million cattle reported to be available in Amhara, Oromia, SNNP and Tigray regions, respectively (CSA, 2017, 2018) (Figure 1). 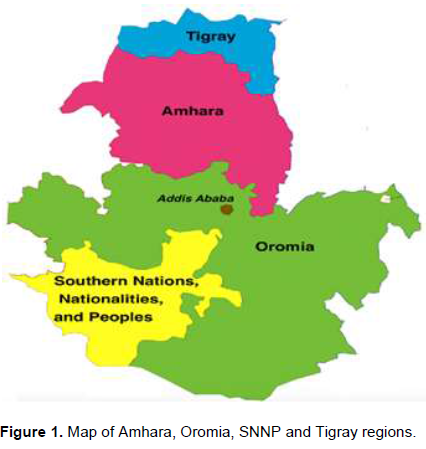 AI technicians’ interview was conducted in July and August 2017 with randomly selected AI technicians operating in Amhara, Oromia, SNNP and Tigray regions. The interview was focused mainly on their performance-related issues and seasonality of AI service. A total of 161 AI technicians from the four regions (49 from Amhara, 53 from Oromia, 36 from SNNP and 23 from Tigray regions) were randomly selected and interviewed using a structured questionnaire. Both qualitative and quantitative data collected through this structured questionnaire.

Then, a multi-stage random sampling system was followed to select woredas, kebeles, and farmers from each of the four target regions. Sample farmers were then selected randomly from each woreda and kebele using assigned random numbers. Sample size was estimated at 90% significance level in each region.  As suggested by Suresh and Chandrashekara (2012) and Daniel (1999), the following formula was used to determine the sample size for each region since the population size for all region is known.

Primary data collected from AI technicians and farmers through the survey tools entered in Microsoft Excel and Statistical Package for Social Science (SPSS) version 20 (SPSS, 2011). For data analysis, Statistical Analysis System (SAS - Version 9) (SAS, 2004) was used based on the type of variable. For quantitative data, the General Linear Model (GLM) of the SAS was used and means within the same category were separated using the Least Significant   Difference    (LSD)  for  those   F   tests   that   declared significance (P<0.05). 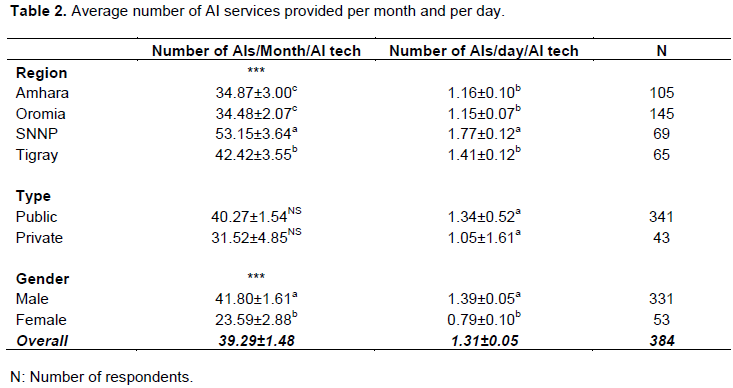 Artificial Insemination (AI) technicians requested to categorize months of a year into regular, peak and off-seasons based on the number of inseminations they provided daily. The study confirms the delivery of AI service followed a seasonal pattern. As shown in Figure 2, an overall average of 6.7 inseminations is reported per day per AI technician during peak season which is 26.7% more than the number of inseminations provided during regular season (3.8 inseminations/day/AI technician). The peak season lies between August and December when availability of ample feed resources is secured as these months fall immediately after the long rainy season and in the harvesting season for most cereal crops. Green pasture is available for grazing purpose and animals  can easily fulfill their energy requirement during these months of the year.

The regular season falls in January, February, June, and   July  when  AI  technicians  provided  daily  average insemination of 3.8. In January and February green pastures normally dry, however a significant amount of crop residues are available in most parts of the country as these months fall immediately after the harvesting season. June and July are part of the long rainy season and are just immediately after the short rainy season when green feed especially of green pasture is available to a significant extent in the field. March, April and May are off-season when on average only 2.23 inseminations per day is provided. Information on seasonality of AI service can be used to allocate the required input and logistic for AI service delivery instead of allocating such inputs and logistics regularly throughout the year. AI service delivery system can strategically be planned and implemented based on this information.

To support the questionnaire survey result regarding seasonality of AI service provision, performance data (between October 2016 and December 2018) received from AI technicians on the number of AI services provided and the result is shown in Figure 3. For ease of data management and presentation, months of a year were grouped into quarters following the Ethiopian budget year. June, July and August were classified as Quarter 1, September, October and November as Quarter 2; December, January and February as Quarter 3 and March, April and May as Quarter 4. The result of data collected on-field performance strongly agrees with the survey result and confirmed the seasonality of AI service delivery system. Peak service was delivered in Quarter 2 (September, October and November) and the service reached its lowest level in Quarter 4 (March, April and May). 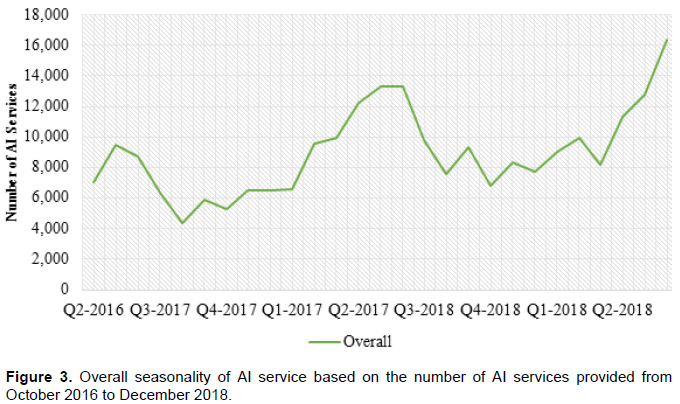 AI technicians participated in this study were interviewed on their performance regarding service per conception (SPC) based on their available performance data in their case book. The SPC reported by AI technicians was not significantly different among regions (P>0.05) with mean SPC of 2.13. The highest (2.24) SPC reported from SNNP region followed by Amhara region (2.17), Oromia (2.11) and Tigray region (1.95).

To support the AI technicians' interview regarding service per conception, in March 2019 a follow-up survey was conducted with 1,083 farmers who received AI service between February and May 2018 in the study regions. About 2.6 inseminations were required for a cow to conceive.  Data received from NAIC on total inseminations and confirmed pregnancies from 2009/2010 to 2013/2014 revealed resulted in a 2.42 SPC. The SPC in this study is much higher than Desalegn et al. (2009) and Ali et al. (2013) who reported 1.88 and 1.55, respectively. It is also higher than the SPC reported in Kenya (1.9) under a controlled environment (Kinyua, 2016)

Under normal conditions, collecting information on conception and calving has various challenges.  Time constraint is among the major factors for AI technicians to follow and collect information on the outcome of AI services they provided. Thus, calving survey was undertaken in March 2019 to evaluate the performance of AI service in terms of conception and calving rates. The result of the survey is presented in Table 3.

Overall average of 62% conception rate, 51% (from all received AI) and 82% (from conceived) calving rates are reported in this study. The limitation in undertaking such a follow-up survey was improper animal identification, lack of record-keeping, lack of basic farmer related information to properly identify the location of farmers and infrastructural problem. These challenges suggest the importance of proper animal and farm identification system and record-keeping to successfully undertake a follow-up survey. If this is in place different conception and calving rates would be obtained. The five years data received from NAIC, on the other hand, revealed a 45% conception rate (from total inseminations). The conception rate reported in this study is higher than Ali et al. (2013), Desalegn et al. (2009), Gebregiorgis et al. (2016), and Tatek et al. (2011) who reported 48.3, 40.9, 27 and 56%, respectively. It is also higher than Mwambilwa et al. (2013) who reported a 48% conception rate in Zambia. The calving rate in this report is also higher than Gebregiorgis et al. (2016) who reported 37% in Tigray region, Ethiopia.  The discrepancy among the different reports is related to the method of data collection. The NAIC data is based on direct reports obtained and synthesized from regional bureaus and may not reflect the exact performance of the crossbreeding program.

All performance-related results reported in this study suggests the importance of establishing proper and structured data collection and reporting system. There should be a strong linkage, network and communication among regional, zonal and woreda level breed improvement, animal health and extension offices to implement the envisaged reporting system.

The authors appreciate Land O’Lakes Venture 37 for the support and for allowing the use of data for academic purpose. The authors also thank AI technicians, farmers, regional bureau livestock experts for their active participation and required support.