Influence of breed on motility and motion characteristics of fresh, chilled and frozen bull spermatozoa

Efficiency of Artificial Insemination (AI) system in cattle invariably depends on selection of the best breed of bull.

Failure of many bulls to consistently and efficiently  breed has been reported to be associated with the production of poor quality semen, seasonal changes in semen quality, high incidence of  abnormal  spermatozoa  and  problems in sexual behaviors that reduce their fertility (Roberts, 1971; Hafez, 1993; Blezinger, 1999). In Ethiopia, Holstein Frisian and Boran (a dual purpose Zebu) breeds have been used to improve dairy productivity. Hundreds of thousands of semen doses are produced annually at the National Animal Genetic Improvement Institute (NAGII) for dairy genetic improvement. Although efficiency problems have been previously reported for the AI system (Desalegn et al., 2009), virtually no objective data exist for evaluation of semen from Borans and their Holstein Crosses using advanced technology (Tegegne et al., 1995). Although currently there is a huge demand by the government for Boran semen, anecdotal data indicate a dismally low (<30%) pregnancy rate which has hampered its wider use both for AI and Embryo Transfer (ET) programs. It is well known that multi parametric evaluation of semen can increase the accurate estimation of fertility of a sperm. In the current study, it is thus hypothesized that breed differences in quality of semen can be diagnosed using a multiparametric semen evaluation that employ advanced technique. An integrated semen analysis system (ISAS) has been used to evaluate the influence of breed in the quality of semen.

A total of 14 breeding bulls (Boran = 4, Holstein Frisian/HF/ = 6 and HF * Boran crosses = 4) aged between 2 and 7 years were used in this study. All the bulls were kept in indoor and under identical conditions of management, feeding and watering throughout the study period. They received hay, green forage and concentrate fortified with vitamins and minerals. Water was given ad libitum. They are allowed to exercise on running track in weekly basis. A total of 125 ejaculates (Boran = 35, Cross = 33 and Holstein Friesian = 57) were collected once per week over three and half months period.

Bulls were given bath to remove dung from their prepuce 30 min before collection of semen. Semen was collected with the help of bovine artificial vagina (IMV; France) early in the morning between 09:00-10:00 AM as per the method described in Salisbury et al. (1978) which was also the routine practice at NAGII. The semen was grossly assessed immediately after collection and later subjected to microscopic evaluation. After the first subjective microscopic assessment for mass and progressive motility and spermatozoa concentration using spectrophotometer were done and approved for further processes, the fresh diluted semen samples were subjected to ISAS evaluation. Integrated Semen Analysis System (ISASv1®) set-up was pre-adjusted for bovine semen analysis as per the manufacturer’s (prosier, Spain) recommendation. Aliquot of 100 μl of fresh diluted semen was placed into a pre warmed micro-centrifuge tube and re-diluted at a rate of 1:3 (semen to extender) to bring the concentration  at 20-50 millions of spermatozoa/ml. Kinetic parameters: average path velocity (VAP, µm/s), straight line velocity (VSL, µm/s) and curvilinear velocity (VCL, µm/s) as well as other related parameters: amplitude  of   lateral   head  displacement  (ALH,  µm),  beat  cross

The data obtained from semen quality parameters were entered to Microsoft excel sheet and SPSS computer statistical package for windows (Version 16, USA) was used for analysis. The data of PH, volume, concentration, mass activity, individual motility, sperm morphological defects and kinematic parameters were compared using Analysis of Variances (ANOVA) and descriptive statistics were used to describe the variables. Duncan’s Multiple Range Test (DMRT) was used to compare significant difference between breeds for those means and percentages at a probability level of 5%. In the analysis, P < 0.05 was set for level of significance. 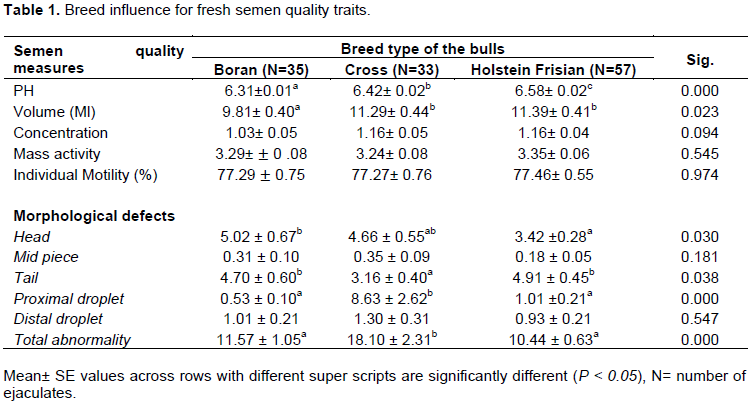 In case of chilled semen; spermatozoa motion types (medium and slow), non-progressively motile and total individual motility percentages were significantly minimal (P < 0.05) for Boran as compared to Cross and HF. Similar to that of fresh semen, most of the spermatozoa were rapid type and the smallest percentage was seen for slow type of motion in all the three breeds. The maximum total and progressive spermatozoa motility percentage for chilled semen was identified in HF.

In line with chilled semen, significantly high total motility percentage (42.9%) for frozen semen was observed in HF.  For motion characteristics significant differences (P < 0.05) among the breeds were recorded for medium, rapid progressive and slow types. Likewise the fresh and chilled semen; most of the spermatozoa (10.30%) in Crosses were rapid type in their motion characteristics. whereas rapid progressive type was the maximal motion type percentage for Boran and HF. Resembling the fresh and chilled semen; the minimal motion type percentage was seen for slow type in all the three breeds.

Initial   conventional  semen  quality  assessment  of  PH, volume, concentration, morphology and motility of spermatozoa was conducted before the actual ISAS evaluation for kinematic parameters and significant difference among the breeds were found for PH, Volume and morphological defects (head, tail and proximal droplets). Previously, similar significant difference between breeds for semen volume was reported by Lemma and Shemsu (2015) in the same center. But the semen volume and morphological defects (head, mid piece and tail) of this study in all the three breeds were significantly higher than the finding of Hunderra (2004) in the same center. Such variability between reports on semen quality parameters might be attributed to difference in age, breed, nutritional status, season of the year the study covers, method of the semen collection procedure and frequency (Hafez, 1993; Blezinger, 1999; Andrabie et al., 2002).

When observing the velocity parameters; all kinematic parameters (VCL, , VAP, ALH, , , , and WOB) were significantly different (P<0.05) in all stages of semen production among the three breeds. Significantly lowest values (P<0.05) of all kinematic parameters (VCL, , VAP, ALH, , , , and WOB) in all stages of semen production were identified in Crosses compared to either boran or HF. The kinematic parametric values of this study were lower than the findings of Keshav (1996) and Sundararaman et al. (2012). In contrast all the kinematic parametric values in this study were higher than the results of Amanda (2011) and Ulfina (2014) in all stages of production.  The overall mean results of other kinematic parameters (ALH, , , and WOB) of this study were nearly comparable to the findings of Keshav (1996) and Sundararaman et al. (2012). However, the variation of , and WOB between studies could also come from their functions; hence, existence of noticeable differences for velocity parameters would bring variation most likely to be seen in these ratios too. Amplitude of lateral head displacement (ALH) and beat cross frequency () in this study were comparable to the findings of Budworth et al. (1988) and Waterhouse et al. (2010). In contrast to spermatozoa motility percentages, the kinematic parameter values of post-thawed semen were significantly higher in Boran compared to either Cross  or  HF  breeds.  This  indicates that, nevertheless the rate of drop for motility percentage was relatively high at time of stabilization for Boran breed; at last those of the spermatozoa tolerating the stages of production were more active for their kinematic activities in this breed. Numerous effects of spermatozoa cryopreservation induce range of injuries from lethal to those which merely impair their subsequent functions. For this reason, the motility and or kinematic parameter value variations between breeds might be due to variations in age, degree of sperm maturation, energy stores (ATPase), viscosity of the fluids negotiated by the sperm, the presence of surface-active agents in the cell membrane (agglutinins), osmolarity, pH, ionic composition of seminal plasma and possibly substances (Cu, Zn, Mn, Hg, hormones, kinins and prostaglandins) that stimulate or inhibit sperm motility (Farrell et al., 1998). Likewise numerous factors like temperature at which semen is analyzed, concentration of spermatozoa analyzed, type of extender used, percent motility and digitization threshold, sampling technique, method of processing, time elapsing between sampling and analysis, the accuracy of the specimen chambers used and the number of chambers, fields and spermatozoa examined could be the factors that brought variations between studies (Blasco, 1984). Based on the multi parametric objective semen quality assessment findings of this study; breed was one of the factors that influence spermatozoa motility and motion characteristics at different stages of semen production. Unexpectedly in this study, the rate of motility percentage drop at stage of chilling for Boran breed was relatively high and comparable to its freezing stage; therefore; further studies with additional tests (acrosome and plasma membrane integrity) at each stage of production are required to reformulate the equilibration protocol for this breed of semen. Moreover, as it was stated by Davis and Katz (1993) subjective spermatozoa motility is not reliable assay for the prediction of fertility. Therefore, under taking objective, repeatable, accurate and rapid tests for the semen quality assessment using ISAS for multi parametric evaluation like spermatozoa motility, motion characteristics, and swimming pattern can increase the prediction of its fertility and potentially saves considerable amounts of money for the country in screening the sub-fertile bulls in the semen production centers.

The authors thank Addis Ababa University thematic project, Collage of Veterinary Medicine and Agriculture, and National  Animal Genetic  Improvement  Institute,  in particular the general and deputy general directors of the institute for their willingness to do the research on the semen producing bulls and also thank the lab personnel of the institute for their respectful collaboration in the actual lab work.