Chicken is a major livestock species raised by smallholder households in rural areas in developing countries of Sub-Saharan Africa as a chief source of meat protein and income generation. However, Newcastle disease largely compromises the production of this precious bird under backyard production settings. The purpose of the study was to assess antibody responses and growth performance following Newcastle disease vaccination in kuroiler, broiler, and local Tanzanian chickens raised under the same tropical environmental condition. In the experiment, a total of 358 chickens comprised of 127 kuroilers, 121 broilers, and 110 local Tanzanian chickens were raised for seven weeks, and body weights were recorded weekly. Birds were vaccinated at four weeks, and blood samples were collected at days 10, and 21 post-vaccination for antibody titres quantification by ELISA test. Results demonstrated higher (P < 0.05) antibody titres in kuroilers (3.81 ± 0.06) as compared to local chicken (3.73 ± 0.07) and broilers (3.53±0.06) at day 10 post-vaccination. The growth performance of local Tanzanian chickens was comparable to that of kuroilers. The present findings contribute to on-going work in understanding chicken immune responses against NDV and inform breeding programs designed for developing chickens with increased resistance to NDV.

The world chickens population is estimated at 18 billion (Conan et al., 2012), and about 80% of chickens that are raised in Africa are indigenous local chickens (Conan et al., 2012). The majority (60%) of African households raise chickens   under   backyard  production   settings   where chickens are left to scavenge for their nutritional need (Mapiye et al., 2008; Mtileni et al., 2009). In Tanzania, 96% of livestock farmers keep local chickens, which supply 94% of poultry meat and eggs in rural areas (Ministry of Livestock and Fisheries Development- MLFD, 2015).

However, local chickens are characterized by low productivity traits like low growth performance and eggs production (Yakubu and Ari, 2018). Efforts are made to introduce improved chicken genetic resources adapted to harsh tropical environmental conditions, for example, with an introduction of kuroiler chicken, a dual-purpose scavenger hybrid chicken raised for meat and egg production, which was imported to Africa from India (Sharma et al., 2015; Fleming et al., 2016; Yakubu and Ari, 2018). Introduction of improved breeds is in an agreement with Tanzania Livestock Modernization Initiative (TLMI) (MLFD, 2015), which among other key priority actions in poultry modernization is the identification of dual-purpose breeds suitable for local free-range scavenging conditions (MLFD, 2015).

Three chicken breeds (local Tanzanian chicken, kuroilers, and broilers), which were raised under the same environment and management condition were involved  in  the  present  study.  Local Tanzanian chicken and kuroiler eggs were obtained from Urio Cross and Pure Breeding LTD, a local farm in Tanzania (Tengeru, Arusha, Tanzania). Eggs were incubated to hatch at the Nelson Mandela African Institution of Science and Technology (NM-AIST) Laboratory egg incubators. The incubation conditions were 37.9°C temperature and 55% humidity. The eggs were candled at 10 and 18 days of incubation to detect infertile eggs and dead embryos. On the other hand, because of difficulty of obtaining broiler chicken eggs, instead, day-old broiler chicks were obtained from commercial poultry company in Arusha, Tanzania (Tanzania Poultry Farm, Usa River, Arusha Tanzania). Therefore, the experiment started with chicks of the same age, and was housed at Livestock Training Agency-Tengeru campus (LITA-Tengeru). The broiler starter feed (0 – 28 days) and finisher (29 – 50 days) were provided ad libitum. Light was provided throughout the experiment and was also used for room temperature adjustment during brooding. The feeds manufactured by commercial company (Harsho Milling Co.Ltd, Moshi Kilimanjaro, Tanzania) were used throughout the experiment.

One-day-old chicks were kept in brooding chicken facility at LITA-Tengeru, and kept for four weeks to allow maternal antibodies to wane (Jalil et al., 2010). Birds at three weeks of age before vaccination were wing tagged and randomly distributed between the control (A) and the vaccination (B) group. Birds in control and challenge groups were kept in separate houses. Group B birds were randomly allocated in three replicates for each chicken type, and birds in each replicate were randomly kept in separate pen of 1.5 m2. A total of 358 chickens (Table 1) were raised for seven weeks.

Body weights (BW) in grams (g) were recorded weekly using analytical balance to assess chicken growth performance. The weekly average BW was calculated for the duration of the experiment. The effect of vaccination on the chicken growth performance was evaluated by calculating the mean body weight gain (BWG). The BWG was obtained by taking the body weight difference between week 7 (BW, 21 days post-vaccination) and Week 4 (BW pre-vaccination).

Newcastle disease virus live vaccine (Vir 116, Freeze Dried, LaSota strain, Biovac, Akiva, Israel) was dissolved in 40 μl sterile normal saline in accordance with the manufacturer instructions to reconstitute to virus titer of 106.5 EID50. The vaccine was stored at 4°C until use as recommended by manufacturer. The viability of the reconstituted virus was confirmed by inoculating 10-day-old embryonated chicken eggs with 0.1 ml of the virus suspension. At 4 weeks of age, birds in the vaccination group were inoculated via an ocular route with 100 μL of the virus suspension (106.5 EID50), and 50 μL into each eye using a micropipette. Likewise, birds in control group were given 100 μL of phosphate buffered saline (PBS) as mock infection via the same route.

Descriptive and inferential statistical analyses were performed using R software (Team, 2017). One-way analysis of variance (ANOVA) and Turkey’s HSD were conducted to assess difference in BWG and average antibody titers between chicken types. Also, the Student t-test was used to test difference between BWG between control and challenge birds, and to test difference between average antibody titers between two time points (days 10 and 21 post challenge). The relationship between BWG and antibody titers was evaluated by performing correlation test. Significance differences were taken at p <0.05 levels.

The experiment was conducted in compliance with the Guidelines on the Humane Treatment of Laboratory Animals as stipulated in the Tanzania Animal Welfare Act, 2008.

The weekly means ± standard errors of body weight and BWG post-vaccination are presented in Table 2. The broilers had the highest growth performance throughout the experiment followed by kuroilers. The kuroiler chickens had higher (P>0.05) body weight than local chickens except at the first three weeks (W1, W2, and W3), whereas, the body weights of kuroilers and local Tanzanian chickens were not different (P>0.05) from week four (W4) to the rest of the experimental duration.  Furthermore, the BWG was higher (P>0.05) in the control group than in the challenge group (Figure 1).

Kuroiler  is  dual-purpose  chicken  raised  for  egg  and meat production (Dessie and Getachew, 2016). Like local chickens, kuroilers can thrive under harsh tropical environmental conditions, and they can scavenge for nutrition needs just like local chickens (Ahuja et al., 2008; Dessie and Getachew, 2016).  The breed outperforms local chickens in terms of meat and egg production (Ahuja et al., 2008; Yakubu and Ari, 2018). However, in the present study, kuroilers (886.80 ±25.63) and local Tanzania chicken (880.07 ±29.67) body weights were comparable (P > 0.05). The discrepancy may be explained by differences in chicken breeds involved in the studies. Local Tanzania chickens are not well characterised and due to lack of genetic resources conservation programs, possibly local chicken involved in the present study have acquired high growth performance genetic materials from improved breed through interbreeding. Also, feed regime used in the present study probably had significant contribution on growth performance observed in kuroilers and local Tanzanian chickens. This is corroborated by higher body weights observed in the present study as compared to the previous reports. For example, Egyptian chicken (Mandarah) mean body weights at 4 and 7 were 299 and 747 g, respectively (Taha et al., 2012). In another study conducted in Nigeria to evaluate growth characteristic of kuroiler and Nigerian local chicken (Fulani), at 6 weeks of age the mean body weight of kuroiler and Fulani was 450 and 228 g, respectively (Yakubu and Ari, 2018). In another  study   conducted   in   Tanzania  involving  local chickens, the mean body weights at 4 and 7 weeks of age were 151 and 419 g, respectively (Munisi et al., 2015). 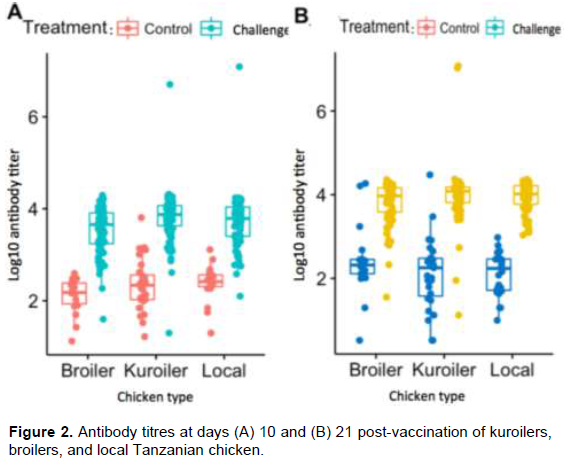 Although not supported by empirical studies, kuroilers are said to be resistant to infectious diseases (Sharma et al., 2015; Fleming et al., 2016). The higher antibody titres observed in kuroilers likely corroborated the previous reports, which suggest increased disease resistance in kuroilers.

Generally, the observed antibody titers in the present study are relatively higher compared to the previous findings in other parts of the world. For example, Luo et al. (2013), reported mean antibody titer of 3.3 at 41 days after second immunization among Chinese-yellow broiler chickens. Another report found the mean antibody titer of 3.2 at 15 days post challenge among commercial meat chicken type (Tabidi et al., 2004). Generally, the comparison of the antibody responses in the present study with the previous reports is difficult because of the difference in environmental conditions, NDV strains used in vaccination, and detection tests involved.

Kuroiler chickens demonstrated higher antibody titers following ND vaccination as compared to local Tanzania chickens and broilers raised under the same environmental and management condition. However, it remains to be established whether the high antibody titres observed in kuroiler chickens can be translated to an increased protective effect against virulent NDV infection in the field. Also, the growth performance of kuroilers and local Tanzanian chicken were not different, which suggests that breeds and feeding regiment employed in the present study had an influence on the observation. Overall, the finding contributes to on-going work on understanding chicken immune responses against NDV and informs breeding programs designed for developing chickens that have increased resistance to NDV. Also, findings suggest genetic characterisation of local chicken genetic resources and to establish the levels of gene flows between local chicken and improved commercial breeds existing in Tanzania.

We thank the Bill & Melinda Gates Foundation for funding this research (grant #OPP1083453) through the Program for Enhancing Health and Productivity of Livestock (PEHPL) and the Nelson Mandela African Institution of Science and Technology in Arusha (NM-AIST), Tanzania for hosting the program.