There are a number of pregnancy complications that confer significant risk to the mother or fetus. Induction of labour is as an artificial termination of pregnancy utilized to decrease both maternal and neonatal morbidity and mortality. Institution based retrospective cross-sectional study was conducted among 347 pregnant women undergone induction of labour from 2013-2015 in Otona referral hospital. Nearly 207 (59.7%) of the women who undergone through induction of labor procedure had successful delivery of their baby. Premature rupture of the membranes 167(48.1%) was the most common reason for induction. Being women of age ≤ 24 years, having Bishop Score > 5 and Apgar score ≥ 7 at first minute were positively associated with successful induction of labour. Hospitals should have quality assurance programs and induction policies, including safety tools such as checklists, to ensure that inductions are performed in the best possible quality.

Induction of labor refers to artificial stimulation of uterine contractions before the true onset of spontaneous labor in order to achieve vaginal delivery by medical or surgical means (Sanchez-Ramos, 2005; Rouse et al., 2011).

Augmentation of labor refers to increasing the frequency and the intensity of already existing uterine contractions in a patient in true labor but progressing inadequately, in order to achieve vaginal delivery (Sanchez-Ramos, 2005). There are a number of complications of pregnancy that confer significant ongoing risk to the mother or fetus like preeclampsia; preterm premature rupture of the membranes (PPROM); intrauterine growth restriction (IUGR); and post term pregnancy.  For these conditions, induction of labour (IOL) is often the principal medical intervention utilized to decrease both maternal and neonatal morbidity and mortality (Sanchez-Ramos, 2005).

The greatest maternal risk of ILO is the risk of morbidity associated with cesarean section (CS) for failed induction and for other obstetric indications like non-progress of labour and fetal distress (National Collabourating Centre for Women’s and Children’s (NCC-WCH), 2008).

There is a consensus that the success of induced labour is directly related to the status of the cervix, with higher CS rates in those with an unfavorable cervix. In addition other factors that contribute towards increasing the risks of a CS following labour induction include null-parity, obesity, mother’s age above 30 years, fetal macrosomia, use of epidural anesthesia, use of magnesium sulphate and chorioamnionitis (Vrouenraets et al., 2005).

Despite the fact that IOL plays a vital role in reduction of maternal mortality, the success rate of induction and factors that contributes to it are not well studied in the study area. Therefore, this study aimed to identify factors that affect success of induced labour; which helps to improve quality of IOL and thereby decrease unnecessary indication of the procedure.

A retrospective cross-sectional study was employed from 2012 to 2015 in Wolaita Sodo University teaching referral hospital. The hospital is located in Wolaita zone of southern nations nationalities and people’s regional state; 327 km from the capital Addis Ababa. Established in 1928, the hospital is currently serving more than 2 million people with about 195 inpatient beds.

The study included all registered women who had been delivered a gestational age of 28 weeks and above through induction of labour. Data were collected using a pretested structured questionnaire from the induction register and medical record files. Information regarding demographic features, details of induction of labour (indication, method, mode of delivery, complications, and neonatal outcome). Seven midwifery nurses guided by three supervisors collected the data on January 7, 2012.

The filled questionnaires were checked for completeness and entered into EPI INFO version 3.5.3 statistical software and then exported to SPSS version 21 for further analysis. Descriptive statistics was used to describe the study population in relation to relevant variables. Both bivariate and multivariate logistic regression models were used to identify associated factors. Odds ratios and their 95% confidence intervals were computed and variables with p - value less than 0.05 were considered as significantly associated with the outcome variable.

Ethical clearance was obtained from the college of health sciences and medicine, Wolaita Sodo University. A formal letter of cooperation was written to the hospital. Anonymity was maintained to assure confidentiality.

Data quality was controlled by giving trainings and appropriate supervisions for data collectors. A pre-test was conducted on 5% of the records that are not included in the study. Appropriate modifications were made after analyzing the pretest result before the actual data collection.

Initiation of uterine contractions prior to its spontaneous onset after 28 weeks of gestation.

Failure to achieve a vaginal delivery within 12 h after induction of labour was commenced.

When a woman had achieved vaginal birth within 12 h after induction of labour was started.

Socio-demographic characteristics of the respondents 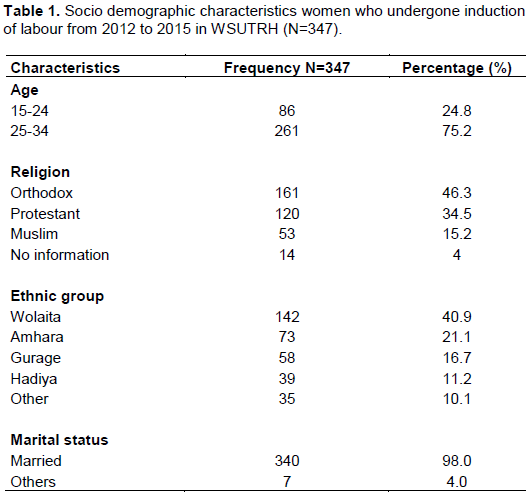 The mean gestational age was 39.55 ± 2.49 weeks (range: 30- 44 weeks). Of the included 347 women, 167(48.1%) undergone induction of labour for premature rupture of membranes (PROM). Out of the 294 women who had recorded information on bishop score 256 (73.8%) of them had a modified bishop score of greater than or equal to 6. Regarding method of induction, it is reported as all of the women had received intravenous Pitocin infusion (Table 2). 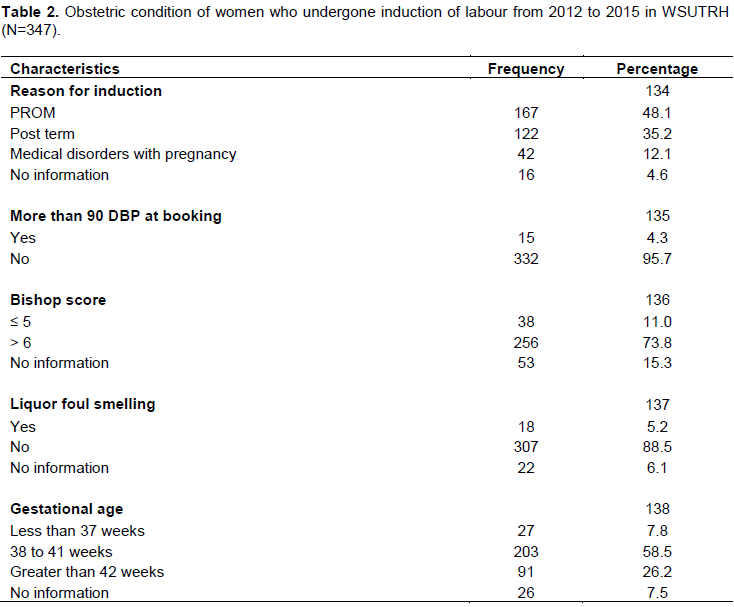 More than half (59.7%) of the women delivered vaginally within 12 h after induction,  while  132  (37.8%)  delivered by CS; from this, 92 (26.5%) undergone CS due to failed induction of labor that means unable to deliver vaginally within 12 h, 24 (6.9%) were due to fetal distress, while the rest were due to different reasons like Cephalo-pelvic disproportion and malposition (Table 3). 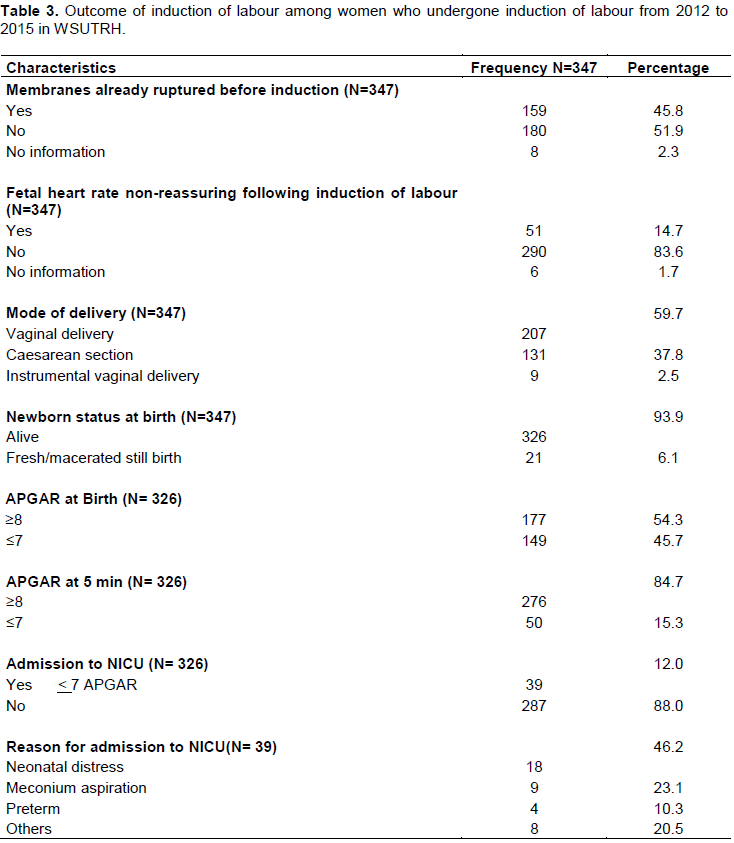 The odds of women with age of less than 24 years were 2 times [AOR=2.437 (1.126, 5.275)] higher than those who were age of 25 and above to experience successful induction. The likely hood of successful labour induction was approximately 2.6 times more prevalent among those women’s with Apgar score of greater than 7 [AOR=2.61(1.40, 4.86)]. Significant association between women’s bishop score and success of labour induction was observed, in which women with bishop score greater than 5 were about 7 times more likely to have successful induction when compared to those with less than or equal to 5 [AOR=7.51(2.44, 23.07)].  On the other hand the success of induction was 64% times lower among women with fetal heart rate record of non-reassuring [AOR=0.3(0.13-0.98)] (Table 4). 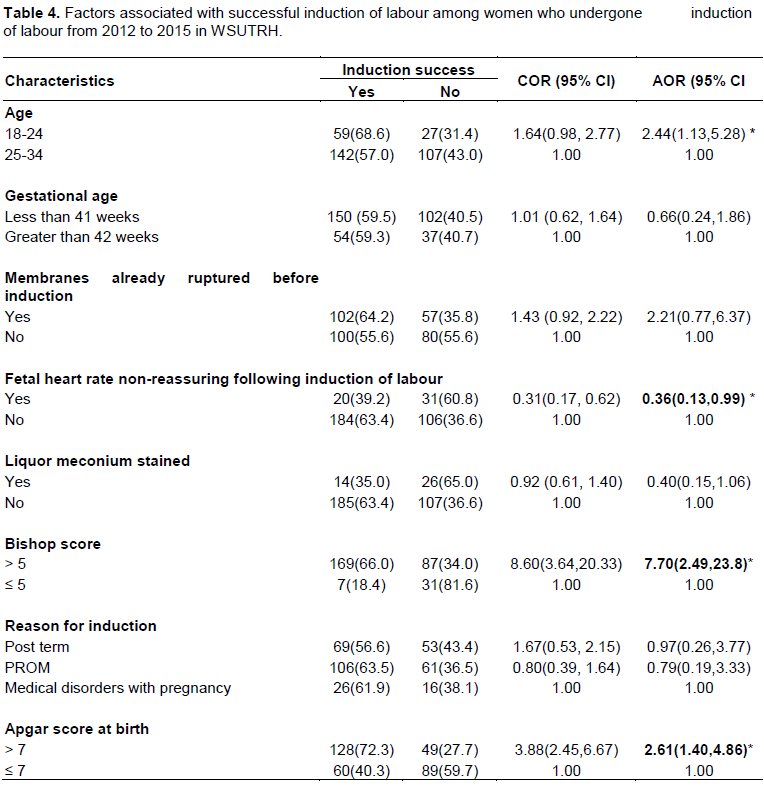 Various methods have been recommended for induction of labour such as intra-cervical Foleys balloon, prostaglandin E2 and intra venous Oxytocin etc. In this study oxytocin IV infusion was used exclusively to induce induction. This finding was comparable with study done in Latin America (Guerra et al., 2009) where oxytocin IV infusion was used in about 90% of all labour inductions. This is also in agreement with other studies that have reported its use in 85-100% of inductions (Goffinet et al., 2003; Vahratian et al., 2005; Le Ray et al., 2007). But in study conducted in Egypt, 65.5% of the women received vaginal misoprostol while only 34.4% received intravenous oxytocin infusion as a method of labour induction. The decision whether to induce with oxytocin or misoprostol was probably not dependent on the favorability of the woman’s cervix, but more on their availability and culture within the unit.

In this study it was found that, age was significant predictor for success of labour induction, its likelihood being greater among women of age less than 24 years; which is similar with study from Nepal (Rayamajhi et al., 2009). The condition of the cervix at the start of induction is an important predictor, with the modified Bishop score being a widely used and predominant risk factor scoring system (National Collabourating Centre for Women’s and Children’s (NCC-WCH), 2008) induction of labour results in high failure rate if the cervix is not ripe or vice versa (SOGC Clinical practice guidelines, 2001).

In line with these studies, the current finding also showed strong association between bishop score and successful induction of labour. The odds of successful induction  were  7 times more likely in women with Bishop Score above 5. Similarly study conducted at Kathmandu medical college teaching hospital to assess indications for labour induction and predictors for failed induction the 0-5 Bishop Score group accounted for the majority of failures 70.1% (Arulkumaran et al., 2008). Other study conducted to quantify the risk of cesarean delivery associated with medical and elective induction of labor, Bishop score of 5 or less was a predominant risk factor for a CS (Vrouenraets et al., 2005). In study that examines influence of labor induction on obstetric outcomes in patients with prolonged pregnancy, the Bishop score before induction was an important factor that affected the delivery outcome, resulting in significantly higher rates of cesarean section and vacuum extraction when the score was unfavorable (Bodner-Adler et al., 2005).

In Ethiopian study done to evaluate the relation of Bishop Score and induction outcome measured by length of induction initiation-vaginal delivery time and modes of delivery, 45.7% induction failures was observed among the 0-5 Bishop score group (Berhan and Dwivedi, 2007). Apgar score at first and fifth minute was found to be one of indicators of successful induction related to the baby.

Pervious study done in Latin America has shown that induction was associated with lower 5th minute Apgar scores. In our study even though Apgar score at fifth minute did not show significant association, the success of induction  of  labour  has increased as first Apgar score become greater than 7.

Limitation of the study

The study was limited by the retrospective use of adatabase, allowing only the available variables to be used. In this particular hospital, for example, information on general medical and past obstetric history were not routinely and clearly recorded. The study was conducted in one hospital and the results may not be representative of the entire country.