A review based on systematic approach was used to produce proof on the occurrence of substance abuse and use among the youth of Australia using the Preferred Reporting Items for Systematic Reviews and Meta-Analyses (PRISMA) guidelines (Moher et al., 2010). The Electronic databases that were used to identify literature include PubMed, MEDLINE, Australian Public Affairs Full Text (APAFT), EBSCOhost, and Google Scholar. Key words used in the search included youth, substance use, substance abuse, prescription drug abuse, drug abuse treatment, and substance abuse treatment, and combinations of these terms. The literature search was restricted to English-language journals released between 2000 and 2015.
The key words used, identified after discussion with a qualified librarian, were “Epidemiology" OR "prevalence" AND "substance-related disorders" OR "substance-related" AND "disorders" OR "substance-related disorders" OR "substance" AND "abuse" OR "substance abuse" AND Australian AND "adolescent" OR "adolescent" OR "youth". The method to probing the literature included databases and Websites searched keywords, and the criteria for inclusion/exclusion of documents. The following sources were searched for: Journal articles describing quantitative studies identified by a search of electronic databases; Drug scope library; Australian Government publications (http://www.drugs.gov.au/information-and-services/health/drug-and-alcohol-use and Qualitative European drug research network http://qed.emcdda.eu.int. The study was conducted between January and December 2015. The data searches and entry into a Reference Manager were done in December 2015. The papers were reviewed between January February 2016 and the analysis took place from March to June 2016.
Two main purposes were served during the recognition and choice of appropriate literature: the growth of a literature review and the production of a companion document, the prevalent abuse of substance among the Australian youth: An  Annotated  Bibliography (Feidler et al., 2002). The marked bibliography offers a more wide-range of relevant journals as well as accessible data sources applicable to substance abuse among the youth in Australia.
The World Wide Web was used to compliment the search for information from Department and State agencies, research/evaluation centres, and organizations whose focus is on the youth and adults, including: National Health and Medical Research Council (NHMRC) (www.nhmrc.gov.au/health-topics/ alcohol-guidelines); Department of Health (www.alcohol.gov.au); Department of Health (www.health.gov.au/internet/main/publishing.nsf/content/publications-drug-substance-abuse); Australian Drug Information Network (ADIN) (www.adin.com.au/); National Drug Law Enforcement Research Fund (NDLERF) (www.ndlerf.gov.au/); National Drug Strategy (www.nationaldrugstrategy.gov.au/); National Drugs Campaign (www.drugs.health.gov.au/); Department of Veterans’ Affairs (www.therightmix.gov.au/); Australian Psychological Association (www.psychology.org.au/); The Australian Institute of Health and Welfare (AIHW) (www.aihw.gov.au); Australian Institute of Criminology (www.aic.gov.au) and ETOH (the National Institute on Alcohol Abuse and Alcoholism’s Alcohol and Alcohol Problems Science Database).
Articles and reports published by authorities in the field of substance abuse and drug addiction were reviewed as well. About 600 articles, books, and reports on the topic of substance abuse among aging adults were produced from the search.
An applicable standard concerning inclusion and exclusion criteria for the literature review was used (Mertens, 1998). These standards were further used to inquire questions concerning the purpose of the literature review, the form of the literature cited, if the review is free from biases, whether the assessment establishes a need for the study, the hypothetical background of the literature review and the research questions, whether a satisfactory amount of material is provided within the study to guide an appropriate studies, the practicality of the study, and if disregarded expressions were included (Mertens, 1998).
A total of 2,445 articles were firstly collected. The PRISMA model was used to classify them (Figure 1). After care examinations 1,845 duplicates and journals that felt short of the initial eligibility screening were removed; 339 journals failed to meet initial eligibility screening, while 261 articles were reviewed manually based on the titles and abstracts to decide if they met the research inclusion criteria. Finally, 6 referred journals satisfied the inclusion criteria (Figure 1). 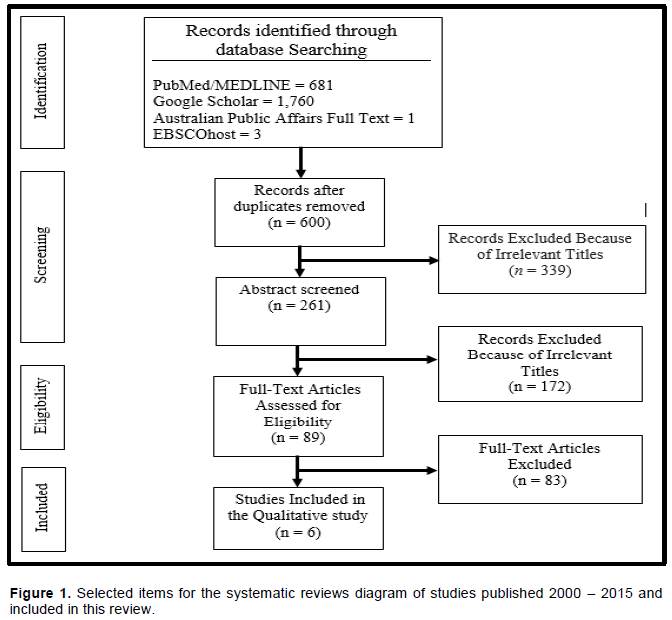 Having knowledge about the prevalence of substance use and abuse can lead to putting policies and resources in place which can lead to a quantifiable reduction in substance use and abuse. Thomson (2012) Indicated that access to the best and current knowledge and information is highly seen as a critical step to bridging the gap between what is known and what is actually not known. The main objective of this systematic review was analysing the bulk of published journals that documents the findings of prevalence of substance use and abuse among the Australian youths.
Prevalence of using substance and abuse among the youths were identified using our search terms as having been published in the past 15 years. The occurrence and forms of using substance are strongly linked to a number of factors such as age, sex, cultural background, and social and environmental setting. These forms factors vary for different types of drugs abused. Australian Institute of Health and Welfare (AIHW) monitors trends in the population and the following information comes from their most recent data collections for Australians aged 14 years and over (Australian Institute of Health and Welfare (AIHW), 2005, 2007). From the systematic review, alcohol, cannabis and tobacco use were all considered to be linked with an increased likelihood of using all other drug types considered in the studies. Among Australian youths, cannabis use dependence was the strongest marker for other drug abuse or dependence (Degenhardt and Lynskey, 2001). Cannabis use and abuse were also highly related to other drug use and drug use problems. However, the studies also have shown that relationship between cannabis, alcohol and tobacco use existed (Degenhardt et al., 2001, 2001a).
The illegal use of substances is the most dominant type of substance use in most part of Australian and other western societies. The vast majority of Australians use alcohol, cannabis and tobacco. The consistent use of alcohol by adults is satisfactory to three out of four as compared to consistent use of tobacco by two out of five Australians adults. Alcohol is consumed on a weekly basis by 41% of people aged 14 years and over and daily by 9 and 17% use tobacco on a daily basis (Australian Institute of Health and Welfare (AIHW), 2005, 2007). The findings from the reviews are in line with those of previous studies indicating a high occurrence of risky drinking among both indigenous and non-indigenous prisoners in Australia (Gately et al., 2016; Lukasiewicz et al., 2007; Maggia et al., 2004). Steps are needed to remedy the risky alcohol use and alcohol-related harm in this disadvantaged population. Evidence from research suggests that to be effective, such interventions should not be limited to abstinence-oriented education programs in prisons and the communities, but should involve individualised support and for prisoners the support should continue after they have returned to the community (Clifford et al., 2011; MacGowan et al., 2003). Considering the larger community, Native people are more likely than non-Native Australians to abstain from alcohol altogether but those who do drink are more likely to do so disproportionately (Gartner et al., 2009).
Research shows that multiple drug use was common among young people, often including alcohol and multiple other drugs. Australian Institute of Health and Welfare (2014)revealed that the most common drugs used by young people include; Marijuana, Nicotine, Prescription drugs (e.g. Valium, Xanax, Panadeine Forte), Heroin, Ecstasy, Ice (crystal meth) and Speed. Other reports of drug use included ‘chroming’ (that is sniffing paint), lysergic acid diethylamide (LSD) and cocaine. Australian Institute of Health and Welfare (2014)revealed that two in five people aged 14 years or older in Australia smoked tobacco, took in alcohol at risky levels or used an illicit drug. In a study by Australian Institute of Health and Welfare, National Drug Strategy Household Survey shows that the majority of the youths (37.6%) had consumed more than a full glass of alcohol in the 12 months prior to the survey (Australian Institute of Health and Welfare (AIHW), 2005). Another widely used drug was Cannabis accounting for 13.5% among the 12 to 19 year olds though it was not as widely used as alcohol. Ecstasy and amphetamines had similar rates of use, with just over three per cent of adolescents having used them in  the  year  prior  to  the  survey  (Australian  Institute  of Health and Welfare (AIHW), 2005). According to the Drug Strategy Branch of the Australian Government Department of Health and Ageing, secondary students use over-the-counter and illegal substance (White and Hayman 2004). The report was founded on data collected in 2002 from 23,417 students aged 12 to 17 years in 363 schools across Australia. Although, these studies are similar to the National Drug Strategy Household Survey, they show diverse forms of drug use amongst age groups 12 to 13 years, 14 to 15 years and 16 to 17 years (White and Hayman 2004).

The burden of substance abuse and use among Australian youth may help Australian Government to develop prevention programs and policy that is targeted at reducing the menace. This study found out that there is a huge evidence of the presence of substance abuse and use among Australian youth despite the availability of policy programs. The study revealed a number of drugs such as alcohol, cannabis and cigarette or tobacco are abused and used by the Australian youth. As noted throughout this article, substance use and abuse is a continual challenge the youth in Australia faces. Most of the literature that is available on this issue does not focus on a youth perspective. Further research in this area is therefore needed to ascertain what literature is available on the youth perspective and the issues and challenges of youth substance use and/or abuse in Australia. A continued research and the implementation of effective prevention, treatment, and harm-reduction programs; the youth will be better equipped to overcome this challenge, possibly limiting the harmful effects that these substances can have on our youth.

LIMITATIONS OF THE LITERATURE REVIEW

This literature review has some limitations. The first limitation is the availability of the research itself. To start with, there was ample information available; however this was not all applicable to the topic and needed to be excluded due to size limitations, time constraints, and information either being out of date, or inappropriate for the focus of this study. In addition, the main criticism of the currently available literature is that youth have not been included in many of the research studies and their thoughts, ideas, and feelings towards the topic of substance use and abuse has not been captured thoroughly.
Another main limitation to this research is the fact that some of the available literature have come from secondary sources, such as literature reviews and opinion papers, and has therefore already been deduced and described by numerous other individuals. This may in fact have had an impact on the accuracy of the information and it would have been extremely helpful to being able to have found more studies that included youth themselves. By conducting future research with youth themselves, more categories could be created that do not view youth as a homogenous group, but rather takes into account ethnic, cultural, religious, monetary, and age differences.