The study investigated police officers’ perceptions about corruption in Zimbabwe. The study was informed by Bourdieu’s theory of habitus. A case study design involving a self-administered questionnaire was used to collect data from sixty-four respondents sampled using a census method of sampling. Data was analysed using descriptive statistics and presented on tables and pie charts. The study revealed that police officers were aware of corruption through training, discussions, presentations by bosses and literature. Police officers do not continue to learn about corruption through formal means like workshops. They perceived that corruption existed in the police force; believed that police corruption was due to low salaries, poor working conditions and greediness. Police officers perceived that the existence of corruption in society was due to low salaries, long time in positions of authority and greediness. They also said that corrupt people were usually the rich, the middle class, company owners, top politicians or top management. The factors contributing to corruption in the police force are not due to lack of awareness but relate to power, conditions of service or selfish behaviour or interests. It is recommended that the government improves conditions of service for police officers to reduce corruption.

DEFINITIONS AND CONCEPT OF CORRUPTION

Study site
The study was carried out at a University in Bindura town, the provincial capital of Mashonaland Central. It is to the north-east of Harare and about ninety kilometres from the capital. The original mandate of the university was to train science teachers but it has now diversified to include other disciplines such as commercial, agriculture and social sciences. The department that houses police studies falls under Faculty of Commerce.
Population and sample
The target population were all undergraduate police students in the first, second and third year of training. The students had basic police training for six months who were now enrolled as undergraduate students. After training for Diploma programme, the students worked before enrolling for a degree programme. The total number of the police officers was 75. All were included in the study so the target population became the sample of the study. Of the 75 respondents, five did not want to take part in the study. All the 70 questionnaires distributed were returned. Of the 70 respondents who responded, six were not usable because they did not answer most questions. The actual sample used was 64 which was about 85% of the original targeted population.
Instruments
A questionnaire was used to collect data. The questionnaire was made after reading a number of papers on the topic of corruption. The papers that were of particular importance in designing the questionnaire were research papers by Kerevan and Expert Panel Survey in South Africa. The questionnaire had five sections namely bio data, training, existence of corruption in the police force, existence of corruption in society and police opinions about corruption. Most of the questions were closed type in which respondents were asked to choose from a given choice of answers. The last question asked respondents to give any comment about police corruption in the country. The data was summarised and analysed using descriptive statistics. Data was presented on tables and pie-charts. 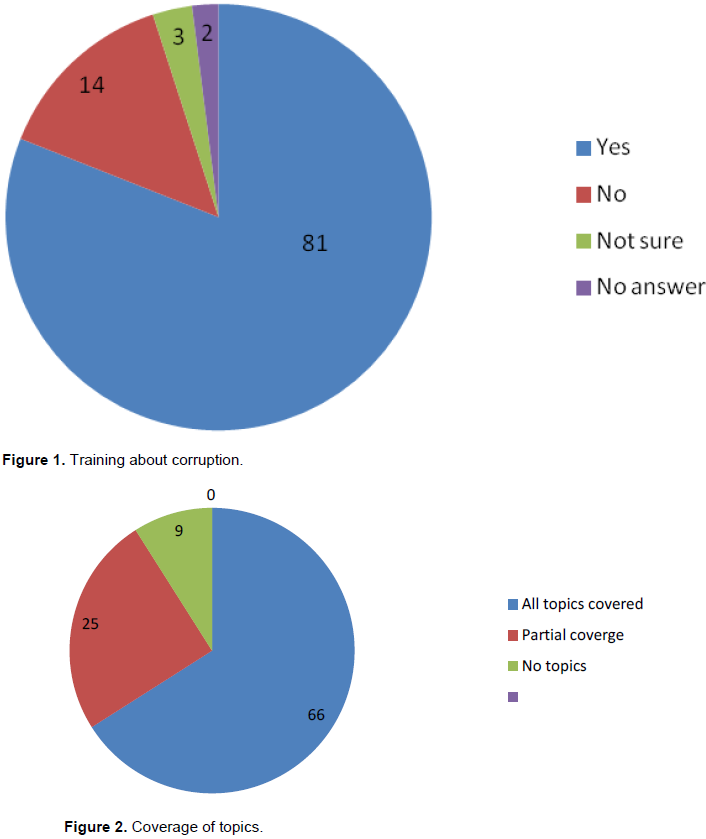 The study has revealed that most police officers in Zimbabwe are aware of what corruption is. They are also aware that  corruption is practised by some police officers and the existence of corrupt activities in the Zimbabwean society. Police awareness about corruption may not be an answer to fighting corruption but the solution may lie in analysing the power which the police have in doing their work, their conditions of service and tendencies of greediness by officers. The government should try to pay adequate salaries to the police officers so that it reduces the temptation of the police to be corrupt for survival. Furthermore, the government should be tough on officers who are found to be corrupt. In addition, research is recommended on what is being done to curb corruption in the police force in Zimbabwe.