Recent increases in the frequency and severity of toxic algae blooms in freshwater lakes has been a major concern for small communities that rely on them for drinking water supply. A hazard quotient approach to risk characterization is employed to analyze the effectiveness of five conventional treatment methods for removal of cyanotoxins. The application of the method for risk assessment and mitigation is demonstrated for five case studies, including Lake Champlain (Quebec), Coal Lake (Alberta), Butte Lake (Alberta), Kubbani Lake (Nigeria) and Bomo Lake (Nigeria).

Agricultural non-point source pollution combined with global warming have caused major algal blooms in our freshwater rivers and lakes (Asnaashari et al., 2015; Stang et al., 2016; Gazendam et al., 2016). Cyanobacteria are photosynthetic prokaryotes that thrive well in various kinds of habitats ranging from freshwater and marine environments to hot springs and deserts (Duy et al., 2000; Ballot et al., 2003, 2010; Baxa et al., 2010; Bogialli et al., 2013; Chia et al., 2009, Chia and Kwaghe, 2015). They are popularly referred to as blue-green algae but their physiological, morphological and metabolic structures clearly identify them as bacteria. The photosynthetic origin of cyanobacteria is similar to that of algae but the pigments are located in the thylakoids, which is in the cytoplasm (Chorus et al., 2000; Codd et al., 2005; Drabkova and Marsalek, 2007; Echenique et al., 2014; Ostermaier and Kurmayer, 2010; Sayyad et al., 2015).One of the basic “metabolic processes of cyanobacteria” is the fixation of di-nitrogen in aerobic conditions using nitogenase, an enzyme that converts di-nitrogen to ammonium. This process enhances a bloom of cyanobacteria in surface waters (Ernst et al., 2006; Fastner et al., 2007; Fawell et al., 1999; Fischer et al., 2000; Graham et al., 2010; Gilroy et al., 2000; Harvey et al., 2015). Cyanobacteria have many properties which result in their relative success and predominance during the blooming season. The following factors are responsible for cyanobacteria blooms in aquatic habitat: aquatic temperatures above 25°C, low light intensity in water, and low nitrogen-to-phosphorous ratios (Hans and Timothy, 2013; Heisler et al., 2008; Hrudey et al., 1999; Griffiths and Saker, 2003; Kaushik and Balasubramanian, 2013; Paerl et al., 2011; Tencalla and Dietrich, 1997).
Presently,there about 3000 known species of cyanobacteria but not all produce toxins. Due to the increasing numbers of cases of cyanobacteria blooms, the occurrence of several harmful cyano-toxins in water supplies has also increased. There is growing concern about the potential for negative health effects on humans due to these toxins (Keijola et al., 1989; Baker et al., 2015; Makarewicz and Lewis, 2015; Merel et al., 2012; Mohamed et al., 2015).
Notwithstanding the recent scientific and technical advances in drinking water treatment plants around the globe, the concentrations of cyanobacterial-toxins have been reported to increase in treated drinking relative to raw water source for small water treatment plants. These toxins enter water supplies after lysis of cyano-bacterial cells, as induced by water collection and treatment activities resulting in subsequent release of toxins in finished treated waters. The toxins released by blue-green algae cannot be removed by conventional treatment methods (Merel et al., 2010; Newcombe and Nicholson, 2002; Nicholson et al., 2003; Szlag et al., 2015; Westrick et al., 2010; Zamyadi et al., 2012).
Drinking water treatment processes may cause breakthrough of toxins into treated drinking water as demonstrated by Zamyadi et al. (2012) in a full-scale water treatment plant system. The passage of toxins, toxic cells and cell debris through filtration systems inhibited chlorination that resulted in the breakthrough of microcystins, resulting in exceedance of Canadian and WHO water quality standards for treated drinking water. Long-term consumption of water contaminated by cyanobacteria and algae is known to cause liver failure, cardiac arrhythmia, dysfunction of the nervous system and skin tumors (Ontario Health Unit, 2014; Farrer et al., 2015).
The objective of this study is to evaluate the use of conventional treatment options and riverbank filtration for managing cyano-toxins, to assess the vulnerability of existing municipal drinking water facilities using surface water sources.

The application of the hazard index is demonstrated for five case studies, including Lake Champlain (Quebec), Coal Lake (Alberta), Butte Lake (Alberta), Kubbani Lake (Nigeria) and Bomo Lake (Nigeria).
Lake Champlain’s Missisquoi Bay (Quebec)
The population is about 330,000. The Missisquoi River is 130 km long and a tributary of Lake Champlain. The Missisquoi River cuts across Vermont in the United States and southern Quebec in Canada located between Latitude 45° and 0’ E and longitude 72° and 35’ due west. The Missisquoi River catchment  area  covers  the  Green mountains along the US-Canada border (Lake Champlain and Eastern townships in Quebec before emptying into Lake Champlain’s Missisquoi Bay at Richford (Zamyadi et al., 2012).
Coal Lake, City of Wetaskiwin (Alberta)
The population is about 12,525. Wetaskiwin is a city in the Province of Alberta Canada (coordinates 52°N and 113°W). Wetaskiwin is located 70 km south of Edmonton; it sits on what was “formerly a coast of the large sea that covered much of Alberta, millions of years ago”. Wetaskiwin sits at an elevation of 760 m. Coal Lake, a reservoir developed on the Battle River, is on the east side of the City (Zurawell, 2002).
Butte Lake, Town of Picture Butte (Alberta)
The population is about 1650. Picture Butte is a city in southern Alberta (coordinates 49° 52’ N and 112° 46’ W). Picture Butte has a landmass of 2.9 km2 and sits at an elevation of 900 m, 27 km north of the City of Lethbridge. Old-man River and Picture Butte Lake is the sources of drinking water for this town (Zurawell, 2002).
Kubanni Lake (Nigeria)
The population of this community is about 560,000. The coordinates of this water body are 11° 08’N and 07° 43’E. It has two major tributaries: Kampagi River and Kubanni River. Kubanni Lake is the major source of water to Ahmadu Bello University community and its environs. Surrounding the Kubanni Lake catchment is agricultural land; the farmers in this location utilize agricultural practices that are not environmentally sustainable for the lake (Chia and Kwaghe, 2015).
Bomo Lake (Nigeria)
The population is about 300,000. This lake is 6 km north west of ABU Zaria; it is located 11° 12’N and 07° 38’E and about 671 m above sea level (Chia et al., 2009).

Risk assessment of cyanotoxins
A hazard quotient is the ratio of the potential exposure to a substance and the level at which no adverse effects are expected. Risk assessment using the intake rate, hazard quotient and hazard indices using the equations presented below, are described to determine the risk associated with drinking water contaminated with cyano-bacterial toxins.

The intake rate and hazard quotients for consuming raw water, water after conventional treatment in the two geographical locations are calculated using Equations 1 and 2 using the data presented in Table 2. The calculation conditions below are used in deriving Tables 3 and 4. 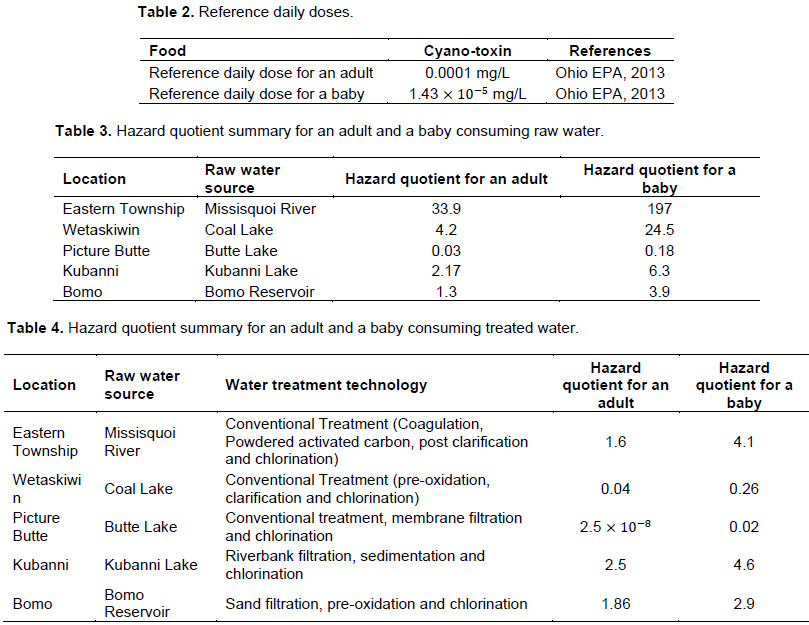 The presences of cyanotoxins in treated drinking water supply from small water treatment plants reaffirms the need to assess the risk of cyanotoxins from these small water treatment plants. In this study, the hazard quotients for an adult and a baby were calculated for a single exposure of treated water for the five treatment plants. The summary calculations are shown in Table 3. The results indicate that a combination of conventional treatment and membrane filtration used in Picture Butte (Table 4) is an efficient technique for removing cyanotoxins. The other Canadian water treatment plants that use combination of coagulation, activated carbon, oxidation, clarification and chlorination have shown a high percentage of removal of cyanotoxins (greater than 97%). This highlights the importance of adopting a more efficient water treatment technologies in affected areas to minimize the risk to a human receptor. On the other hand, in Nigeria, a simple sand filtration or riverbank filtration combined with only chlorination was found to be ineffective in reducing the cyanotoxins concentration to a safe and tolerable level. The efficiency of cyanotoxins removal for both treatment systems in Nigeria were found to around 25%. The people living in these two communities are exposed to elevated concentration of toxin in their drinking water supply.
The results in the different communities included in this study show clearly that hazard quotient for babies are much higher than that for adults. Excluding Picture Butte community, the increased risk for babies compared to adults is between 1.6 and 4.1 to all other four communities.  Moreover,   all   the   results   above   were calculated based on a single exposure (drinking water). Therefore, it is expected that the risk index, which is defined as the sum of hazard quotients due to different exposures, is also alarming. Other exposures that were not considered in this study are food crops irrigated with cyanotoxins-contaminated water, inhalation of water aerosols, and other water sports like swimming and surfing (Queensland Health, 2001).

The assessment of the cyanotoxin removal capacity for small water treatment plants shows that the concentrations of cyanobacterial toxins in treated drinking water in Quebec and northern Nigeria are of concern; the hazard quotient derived from a combination of treated or untreated water from drinking water treatment plants in Quebec and northern Nigeria exceeded unity which indicates the need for appropriate remedial action to be taken or an alternative water supply developed. Also, the intake rate exceeded the recommended World Health Organization intake guideline of 1 μg/L.
Applicable strategies to eliminate cyanobacteria blooms would be appropriate to adopt for water treatment facilities in Eastern Township (Quebec) and northern Nigeria in order to protect consumer’s health. A more sustainable strategy that consists of reducing the introduction of nutrients in surface waters is ideal for a long-term solution. Advanced water treatment techniques such as membrane filtration should be adopted since they have been proven to be very effective in treating all kinds of organic contaminants. Small drinking water treatment plants can be upgraded to include membrane filtration and ozonation. This will help to achieve high removal efficiency.