Tenofovir Disoproxil Fumarate a nucleotide reverse transcriptase inhibitor that was introduced as a preferred first line antiretroviral therapy in Ethiopia as of 2008. However, routine renal function assessment is recommended as it is known to cause renal failure and renal tubular dysfunction.

Statement of the problem

Tenofovir Disoproxil Fumarate (TDF), a nucleotide reverse transcriptase inhibitor (Gallant et al., 2004), was introduced in Ethiopia as of 2008 as a preferred nucleotide reverse transcriptase inhibitor of first line ART (Adolescents PoAGfAa, 2011; HAPCO/MOH, 2008). It is currently eligible for use in all groups of HIV /AIDS patients (Adolescents PoAGfAa, 2008).

WHO as at 2013 recommended Tenofovir to be  used as a preferred first line antiretroviral drug used in combination with other ARV drugs (WHO, 2010). However, use of TDF can result in renal side effects that includes renal failure and renal tubular dysfunction  (Peyriere et al., 2004; Perazella, 2003). It is excreted by the kidneys through glomerular filtration and active tubular secretion. When Tenofovir is administered with  acyclovir, ganciclovir and protease inhibitors , its serum  level may be  increased (FDA Report).

Current or past medications are other causes of renal dysfunction (Goicoechea et al., 2008; Jones et al., 2004; Zimmermann et al., 2006). Glomerular filtration (GFR) is one of the methods used to monitor and follow patients on tenofovir. This way of renal function assessment is important for monitoring and the early detection of  adverse effects, as well as  dose adjustment of antiretroviral therapy (ART) (Post FA, 2010). Creatinine-based estimates of GFR are widely used in clinical practice owing to its easy availability and inexpensiveness (Post FA, 2010).. Monitoring renal function decline can be assessed by CrCl using the C-G formula and eGFR using the MDRD formula. Therefore ,it is recommended to calculate either CrCl or eGFR, in addition to serum creatinine for monitoring of renal function among HIV-infected patients receiving TDF in resource-limited settings (Sasisopin et al., 2011).

Cohort analysis and case studies reported tubular damage suggestive of Fanconi’s syndrome. Diagnosis of this syndrome is based on the presence of hypophosphatemia, hypokalemia, glucosuria, hyperchloremic metabolic acidosis and mild proteinuria. The incidence of this  syndrome is 22.4/100,000  after 7 months of treatment and disappear 4-8 months after stopping the drug (Hassane et al., 2004).

A follow-up of serum Creatinine, urinalysis and electrolytes should be performed in patients taking Tenofovir. Early diagnosis is important for timely discontinuation so that life-threatening electrolyte imbalances can be avoided. Patients should be screened after initiation of TDF for renal dysfunction (Ansari and Ansari, 2008).

Magnitude of the problem and associated factors for renal toxicity

Different retrospective and prospective studies conducted in USA from 2001 to 2007 on HIV infected patients on TDF containing regimen showed that the prevalence of  renal failure due to TDF administration varied from 4 to 14% (Joel et al., 2005: Michael et al., 2010; paul et al ., 2011).

Table 1 summarizes the literatures concerning renal side effects of tenofovir and its associated factors. 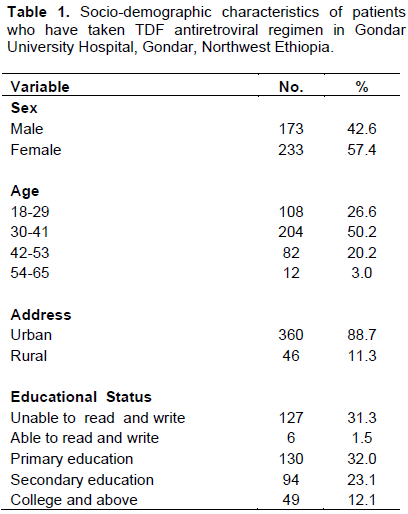 A study done in Zambia from 2007 to 2011 recommended renal function test monitoring is needed before and during ART use in Africa (Wandeler et al., 2014).

A favourable safety profile for TDF in the treatment of adults with HIV infection is essential. Risk factors for development of nephrotoxicity can be identified and may be useful in managing those patients at greatest risk (Nelson et al., 2007).

Intensive renal monitoring with creatinine clearance, GFR, proteinuria, and glucosuria, is essential at baseline and during treatment with tenofovir. Risk factors of nephrotoxicity and pertinence of therapeutic drug monitoring of tenofovir should be evaluated.

According to WHO ART (2010) guideline, there are limited data on the use of TDF without renal screening or monitoring in resource-limited settings.

This study is conducted to assess the practice of renal function monitoring based on the recommendations and to find out the magnitude of renal dysfunction and its associated factors in Gondar University Hospital, and these were not studied before in this set up.

The study design was institutional based cross-sectional retrospective record review.

The study was conducted in the University of Gondar Hospital ART follow-up clinic which is located in Gondar town in the northwest part of Ethiopia.  Free HAART was started in the Hospital as part of a national program in 2003. The total number of people living in the town is 206,987, among which 98,085 are male and 108,902 are females. The hospital is a referral academic center serving a catchment area of nearly 7 million peoples. In the University of Gondar Hospital ART follow-up clinic, the number of patients on ART was 4379, and those who have ever started were 8036 at this ART clinic. The 2008 Ethiopian ART-guideline recommended TDF to be used as a preferred first-line drug. The University of Gondar Hospital began to implement this guideline since then. The clinic gives routine clinical assessment, laboratory evaluation like CD4 counts, complete blood counts, liver and renal function tests, urinalysis; drug refill from one to two months, and adherence support. Patients would be assessed clinically by medical practitioners, health officers for eligibility of initiation of ART. The medication would be offered by trained nurses. Patients would be seen by physicians if they have only new complaints during follow-up. Drugs are refilled every one or two months. CD4 count and complete blood counts would be done every 6 months. This study was conducted from April to June 2015.

The source populations constituted all HIV positive patients and had been on ART drugs at the University of Gondar ART follow-up clinic.

The study populations were all PLWHA who had taken TDF containing regimen at the University of Gondar Hospital ART treatment clinic.

Inclusion criteria: Those PLWHA aged 18 years and above taking TDF containing regimens. Those PLWHA having at least three months follow-up visits to the hospital ART clinic.

Exclusion criteria: Records with poor documentation and patients who have renal failure before Tenofovir initiation were excluded from the study.

The proportion of renal dysfunction and renal function monitoring of PLWHA on TDF containing ARV regimen was unknown from previous Ethiopian studies. Therefore, to get the largest sample size, 50% proportion was taken for sample size determination. Moreover, the degree of precision was assumed for generalization as 0.05 and degree of confidence with which to conclude equals 95%. With the above assumptions, the sample size was calculated by using a single population proportion sample size calculation formula with a source population as follows:

The calculated sample is= 384.

The required minimum sample will be obtained from the above estimate adding the non-response rate.

A total of 2743 subjects who had been taking TDF containing regimen were stratified from the GUH ART database. Patients were classified based on the year they started the ART treatment. All HIV/AIDS patients who were taking TDF based regimens had an equal chance of being selected. A simple random sampling method was used for selecting the sampling units by a computer-generated method.

The questionnaires were pre-tested on patients who were attending in Gondar Military Hospital ART clinic. Training was given for two data collectors before the start of data collection.

The collected data was cleaned for its consistency, checked for its completeness, coded, and entered to SPSS version 20 for analysis and data was re-cleaned for completeness. Descriptive statistics was computed to determine the prevalence of renal dysfunction and the pattern of renal function monitoring for patients taking tenofovir containing regimens. Logistic regression was done for determining association between dependent and independent variables. The result was presented with odd ratio and 95% confidence interval.

Renal dysfunction:  defined as a decrease in glomerular filtration rate [GFR] to less than 60 ml/min with at least one follow-up elevated serum creatinine and lower GFR (KDIGO, 2012).

Patients with renal function test: Patients who have got renal function monitoring according to WHO guideline (2010) before initiation and every six months once on treatment (WHO, 2010).

Retrospective data analysis was approved by the Review Board of the University of Gondar. Patient informed consent was waived because of the retrospective characteristics of the study 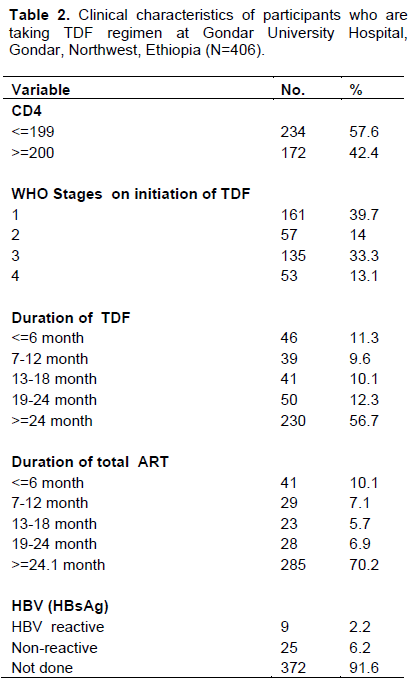 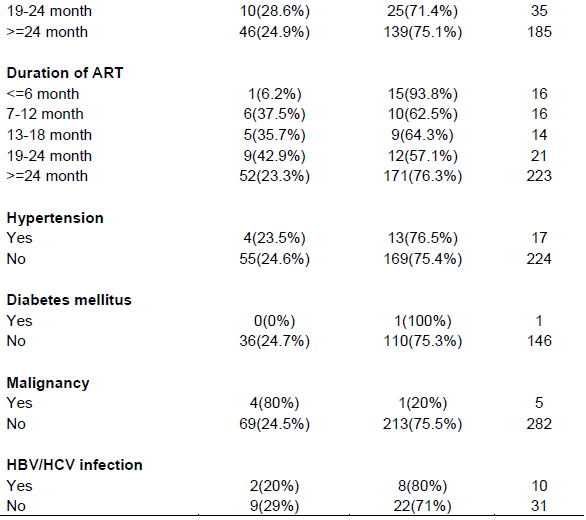 Pattern of renal function monitoring and renal dysfunction at baseline, 3rd, 6th, 9th, 12th, 18 and above 24 months for patients who are taking TDF regimen is depicted in Figure 1. 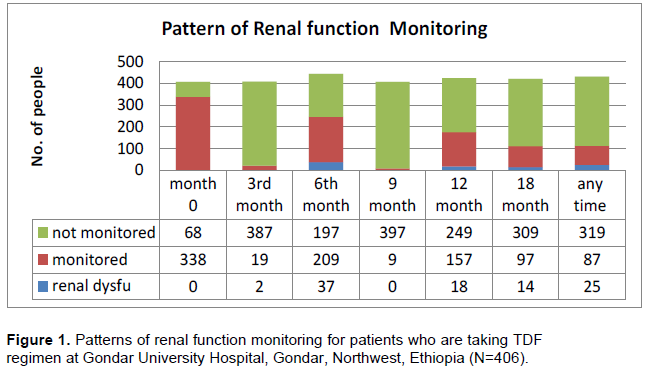 Monitoring of other disease

Great majority of patients were not routinely screened for diabetes mellitus, HBV, and HCV. Hypertension was observed in 5.9% and about 21.4% of the subjects had no record regarding their BP measurements. It was not routine to follow patients with urine analysis, serum electrolyte for patient on TDF containing regimen at this study area. 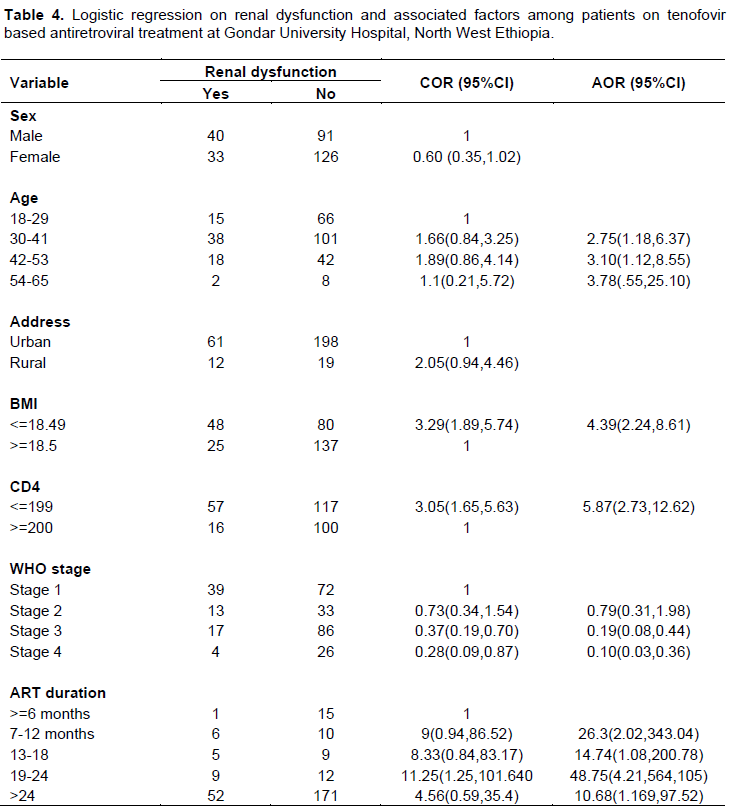 This higher level of renal dysfunction may indicate poor practice of monitoring of renal function in our study. The practice of renal function assessment and monitoring is low for early detection, management, and prevention of renal complication of tenofovir in this hospital. This could  be due to poor documentation of patient’s investigation and gaps of the health care workers in applying WHO guideline to improve the patient’s health and prevention of health related complications.

This study revealed that patients from age 30-53 years have a significance association with renal dysfunction. This study is similar with the study done in Multicenter EU, UK, USA, London (Nelson et al., 2007). This may be due to progressive decline in GFR as age increases.

In this study, there is a positive association between lower body mass index and renal dysfunction. Patients having lower BMI have four point four times more risk of developing renal dysfunction than patients who have normal body mass index. This is consistent with the results of  studies done in Thailand (Sasisopin, 2011)and USA Maryland (Moore, 2009).

Patients who have CD4 lower than 200 per microliter have six times more risk of renal dysfunction than those with higher CD4 counts. This is in line with the studies done EU,UK, USA, London (Nelson et al., 2007)and USA Maryland (Moore, 2009).

The duration of ART has also a positive impact on renal dysfunction since the longer the duration of ART the higher the risk. This study is different from Thailand (Sasisopin et al., 2011)and similar with west India (Ketan et al., 2010). This may be because of prolonged exposure of different ART drug leading to transient renal function abnormality.

The study design is cross sectional which has a limitation to establish a causal association. The study is based on secondary data which has a disadvantage of incompleteness because of in appropriate handling of patient record. Also, some of the records on investigations might have been lost.