In the resource-limited countries, CD4 count and viral load (VL) determination are not always systematic, due to the low follow-up coverage and/or limited access to optimal hospital facilities. The present study aimed at evaluating the clinical role of Serum Protein Electrophoresis (SPE) in HIV health care and disease control. An analytic study was conducted in a Cameroon reference’s hospital, in HIV patients on antiretroviral treatment. Blood sample was collected to perform CD4 count, viral load, total proteins, and SPE through clinical capillary electrophoresis. SPE data were correlated to other results. ANOVA, Mann-Whitney test and Pearson’s correlation were performed, at the threshold P<0.05. A total of 72 patients: 51 (70.8%) women and 21 (29.1%) men were included, with a mean age of 41.22±8.48 years. The electrophoretic profile showed that the majority of patients have hyperproteinemia (70.9%) and hyper-γ-globulinemia (89%). All the enrolled patients had low albumin/globulin ratio. A negative and significant correlation was observed between CD4 count and total proteins (r=-0.5, P<0.0001), and γ-globulin (r=-0.6, P<0.0001). The correlation was positive and significant with the albumin/globulin ratio (r=0.6, P<0.0001). Patients with VL≥250 Cp/mL, had a high total proteins and different fractions of globulins, compared to those with VL<250 Cp/mL. The perturbation of CD4 count and VL were associated with SPE data variations, which better describes patient's clinical status. SPE could be combined to the existing analyses to improve AIDS health care.

Acquired Immune Deficiency Syndrome (AIDS) due to human immunodeficiency virus (HIV) is a major threat to the development of resource-limited countries. It is a poverty related  disease  that  has  destroyed  many  lives and contributed to maintain poverty. Sub-Saharan Africa with only 13.4% of the world population is the hardest hit region, home to nearly 70% of people living with HIV/AIDS. In 2016, there were 36.7 million people living with HIV globally, with 1.8 million people who became newly infected with HIV, while 1 million people died from AIDS-related illnesses (World Development Indicators, 2016; UNAIDS, 2017). Western and Central Africa are home to 6.1 million (about18%) of these infections, right after the Eastern and Southern Africa,19.4 million (52%)and before Asia and the Pacific, 5.1 million (14%) (UNAIDS, 2017). In Cameroon, the number of people living with HIV is estimated at 667,000 giving a prevalence of 4.3% over the country (National Institute of Statistics, 2011). Numerous plans to fight against HIV/AIDS have been implemented throughout the significant increase in the total number of Authorized Care Units (ACUs) within the country, and the free provision of antiretroviral treatment (ART) since 2007 nationwide. To meet the WHO standards of care, this free treatment ought to be accompanied by a deep psychological, clinical and biological follow-up. However, biological monitoring of people living with HIV (PLHIV) in resource-limited settings is not always systematic (Mbopi-Kewou et al., 2014). Given these challenges, WHO recommends lymphocytes typing approach and systematic CD4 cells count has so far helped improve the follow-up of PLHIV (Dieye et al., 2005). Sometimes, disturbances in some blood elements such as monocytes and lymphocytes might make difficult the interpretation of CD4 results and consequently jeopardize the management of HIV-infected people (Yéri, 2010). The other key monitoring parameter, the viral load determination, is limiting in the majority of patients with limited resources due to its non-affordable cost. Therefore, it is imperative to develop other cheaper and technically simpler methods for the follow-up of patients with complex biological results. Such methods include new biochemical markers that could be combined to the immunological parameters to better appraise the disease stage and/or progression (Pascale et al., 1997). Thereby serum proteins might be an interesting alternative to address such issue. Indeed, previous investigations carried out in other sub-Saharan African countries with limited resources (e.g. Nigeria and Democratic Republic of Congo) as well in South Africa, have shown the contribution of serum protein electrophoresis in the biological monitoring of PLHIV (Okogun et al., 2015; Adedeji et al., 2014; Kamangu et al., 2012). This approach is not as known in Cameroon as in other African countries especially its usefulness in the monitoring of HIV-infected people. The present study aimed at evaluating the role of serum protein electrophoresis in the monitoring and control of the disease in HIV infected patients.

An analytical study was carried out from August to November 2015 at the Day Care’s Hospital of Douala Laquintinie Hospital (DLH) located  in   Douala   city   (Littoral   region,   Cameroon).  DLH  is  a reference hospital in Cameroon, and its Day Care’s Hospital, an Authorized Care Unit. The study population consisted of volunteers and consenting HIV patients, on ART for at least 12 months and under biological follow-up in DLH.

Considering the HIV prevalence of 4.3% reported in Cameroon upon EDS-MICS 2011, the sample size was determined using the following formula: n=PQ/D2, where n is the sample size required, Zα the confidence level at the desired statistical significance, P is the HIV prevalence, Q=1-P is the proportion of HIV negative participants and D2 is the acceptable error. The minimum sample size was estimated as n=63 and majored to 72 persons with an effect size of about 1.25.

Clinically asymptomatic HIV infected patients, 21 years old or above, who signed an informed consent form were included. Pregnant women were not included in the present study.

Alongside the routine analyses for HIV patients in the Day Care Hospital (CD4+T-cell count and viral load, respectively), an additional 5 mL of blood sample was collected from each patient by venipuncture, in a dry tube. Serum was obtained by centrifugation at 3000 rpm for 10 min. Sera samples obtained were transferred into Eppendorf tubes and immediately stored at -20°C until electrophoresis analysis.

The present study satisfied the National and International Ethical Standards. Prior to the study implementation, ethical clearance was obtained from the Research Ethics Committee of the University of Douala (Authorization N°263/09/2015/M); administrative authorization was also obtained from the Head of the Laquintinie Hospital (Authorization N°2782/AR/HLD/MA). In addition, informed consent was obtained from each enrolled participant. The study was conducted according to the CIOMS guidelines and complied with the Declaration of Helsinki (2013).

In laboratory of the DHL, CD4+ T-cells lymphocytes were counted with a flow cytometer CyFlow® (Sysmex-Partec Görlitz, Germany) according to the manufacturer’s instructions. Briefly, 20 µL of phycoerythrine-conjugated monoclonal antibody to human CD4 (mAb PE MEM241, Partec GmbH, Görlizt, Germany) were slightly mixed with 20 µL of whole blood into a test tube and incubated for 15 min at room temperature, protected from light. Then, 800 µL of  no-lyse buffer were added to the mixture. After homogenizing the content, the tube was introduced into the CyFlow Counter for automatic counting.

The viral load was performed at the Retro-virology Laboratory of the Laquintinie Hospital, using a quantitative PCR (qPCR) (GENERIC HIV Viral Load, Biocentric®, France). The threshold of detectability was 250 copies/mL. Central Laboratory of the Laquintinie Hospital, using the Biuret’s method (BIOLABO kit, France), according to the manufacturer’s instructions.

Statistical analyses were performed with SPSS version 16.0 for Windows. Mean ± standard deviation (SD) and frequencies were used to summarize descriptive statistics. Analysis of variance (ANOVA) was used to compare differences for the normally distributed variables; the Kruskal-Wallis test was also used. The Mann-Whitney was used to compare mean values between two groups for small sample size. The Pearson’s correlation was used to depict the variation trend between two continue quantitative variables. Statistical significance was set at P<0.05. 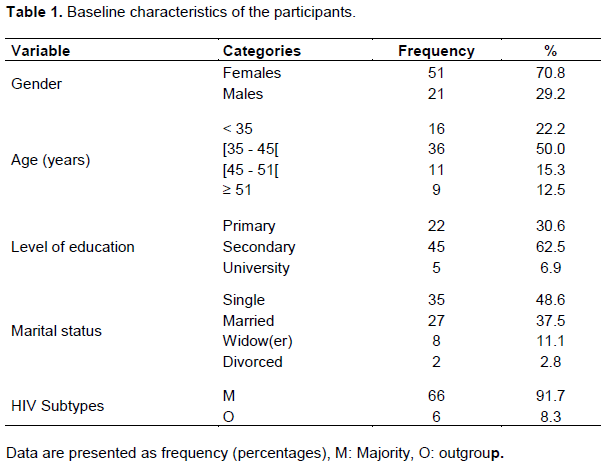 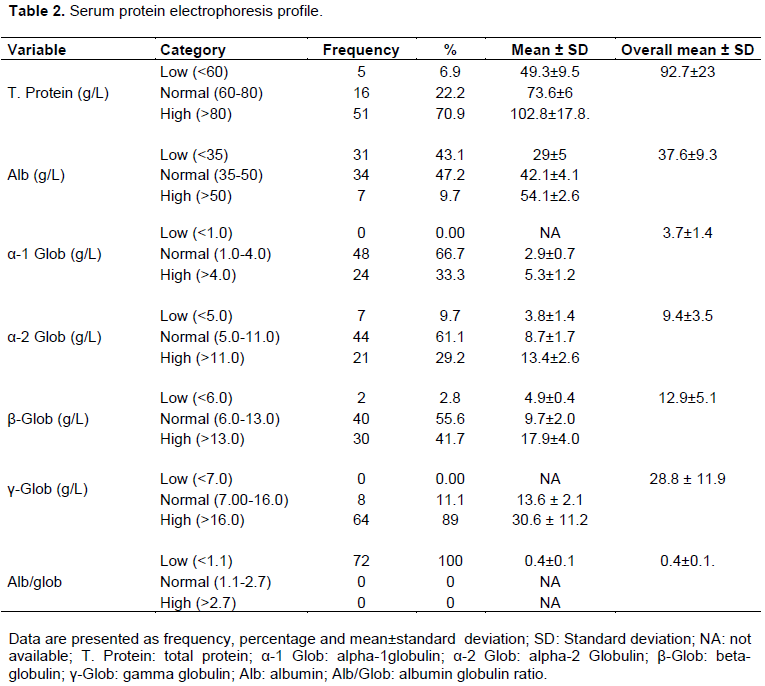 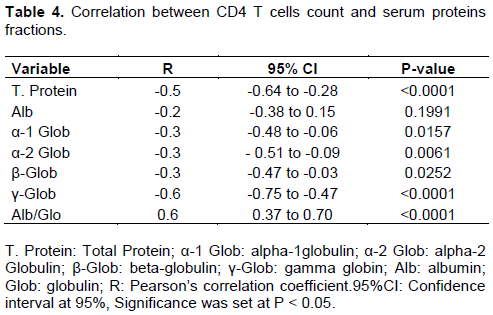 In the present study, the majority of participants were female (70.8%). This result is in line with a previous study carried out in the Laquintinie Hospital in which 64.6% were women,  with  a  sex  ratio  of  0.54   in   favor   of   women (Ramjee and Daniels, 2013; Essomba et al., 2015). This feminization of the pandemics might be due to the biological, epidemiological and sociocultural factors that characterize women's vulnerability as far as HIV infection is concerned in sub-Saharan Africa. In fact, women are more at risk for HIV infection than their male counterparts (Ramjee and Daniels, 2013). However, Kandi (2013) observed in a previous study that 56% of the population were male, more numerous than women (Kandi, 2013).

The hyperproteinemia (102.8±17.8 g/L) obtained in this study is similar to some studies that found 84.10 and 98.3±14.8 g/L in HIV asymptomatic patients on treatment and naïve of treatment, respectively (Adedeji et al., 2014). This increase in total proteins might be due to the increase in some group of immunoglobulins, and therefore to the disease progression. These results are in contrast with a previous study that observed a decrease in total protein level in HIV patients (Okpa et al., 2015).

A low concentration in albumin (29±5 g/L) was observed in 31 (43.05%) patients. These results are similar to the findings from Kamangu et al. (2012) who observed a decrease in albumin in 45.62% of patients. The low albumin levels might be due to some chronic inflammation associated with HIV infection (Mehta et al., 2006). An increase in α1 and α2-globulins as well as the β-globulins fractions were observed. This might be due to the presence of an acute inflammation. A hyper γ-globulinemia was observed in the present study. These results corroborate previous findings with a high γ-globulinemia in all HIV participants (Onyango et al., 2011). Actually, the g-globulin fraction of the electrophoregram constitutes the primary arm of the humoral immune responses. Therefore, a persistent high g-globulin fractions on effective control of HIV disease progression suggests a compensatory phenomenon of the deficient cell mediated immunity associated with HIV infection.

The high viral load obtained, which characterizes the disease progression could induce a significant increase in the levels of total protein, different fractions of globulins and decrease in albumin and albumin/globulin ratio compared to those with a low viral load. Hence, the SPE markers are closely related to  the  different  variations  of CD4 cells count and viral load.

This study aimed at evaluating the role of serum protein electrophoresis (SPE) in the monitoring and control of the disease progression in HIV infected patients. The high  total serum protein and globulin fractions, and the low albumin observed in HIV patients show that HIV infection causes significant changes in total protein, albumin, α, β, γ-globulins and albumin/globulin ratio fractions in correlation with the disease progression. This model should be seen as a complementary tool to better understand some phenomena during the HIV infection. SPE profile could be recommended as additional tool in countries with limited resources.

Based on the present research findings, it is necessary to integrate the serum proteins electrophoresis (SPE) to the existing analyses to improve AIDS health care.

The authors would like to thank the Cameroon Ministry of Higher Education for the allocation for research. Our appreciation also goes to Mr. Loick P. KOJOM FOKO for the statistical analysis performed. We are grateful of the staff of Laquintinie Hospital for the technical assistance, as well as all patients who voluntarily participated in the present study.