Despite the widely spread acceptance that the enthalpy of DNA duplex unfolding does not depend on temperature and is greater for the CG base pair held by three hydrogen bonds than for the AT base pair held by only two hydrogen bonds, direct calorimetric measurement has shown that the enthalpic and entropic contributions of both base pairs are temperature dependent and at all temperatures they are greater for the AT base pair.  The larger enthalpic and entropic contributions of the AT base pair result from water that is fixed by this pair in the minor groove of DNA and is released at duplex dissociation, while their dependence on temperature results from hydration of the apolar surfaces of bases that become exposed upon duplex dissociation.  Analysis of the obtained thermodynamic characteristics of unfolding/refolding of the DNA duplexes of various compositions shows that the enthalpic contribution of base pairing is negligibly small, while the entropic is considerable.  Thus, the DNA base pairing is the entropy driven process but it is conjugate with the bases stacking that is the enthalpy driven. The last is responsible for about 50% of duplex stabilizing Gibbs energy and for almost 100% of its enthalpy, that is for the total heat of DNA melting.

The appearance of the Watson and Crick model of DNA in 1953 was the greatest event in biological science as it explained the mechanism of coding genetic information and its multiplication (Figure 1).  Moreover, it has suggested the physical ground for the DNA double helix that appeared to be supported by the hydrogen bonds between the conjugate base pairs, two between the A and T and three between the C and G bases.  This seems to be confirmed by the optical observation that increase of the CG content leads to increase of the DNA duplex thermostability (Marmur and Doty, 1962).  Since then there were many attempts to estimate the thermodynamic contribution of base pairing to the  double helix maintenance measuring the heats of melting of the synthetic polynucleotides by the conventional calorimeters for liquids.  Although steering the highly viscose solutions of polynucleotides in these instruments was a problem, they seemed to confirm expectation that enthalpic contribution of the C and G base pairing exceeds that of the A and T, as was believed assuming that the double helix is maintained only by the hydrogen bonds between these two bases pairs (Krakauer and Sturtevant, 1968; Neuman and Ackerman 1969; Breslauer and Sturtevant, 1977; Breslauer et al., 1986; Chalikian et al., 1999).  It was suggested also that certain contributions   to   the   DNA  duplex  formation  might  be expected from compact packing of the flat bases (Breslauer et al., 1986; Sugimoto et al., 1996; SantaLucia, 1998; Yakovchuk et al., 2006).  Doubts in the experimental ground for all these suggestions stimulated appearance of more precise calorimetric instruments designed for studying the viscous and highly deficient solutions: the Nano-DSC and Nano-ITC (Privalov, 2012).  These instruments permitted to start detailed thermodynamic investigation of the short synthetic DNA duplexes of certain compositions (Vaitiekunas et al., 2015). 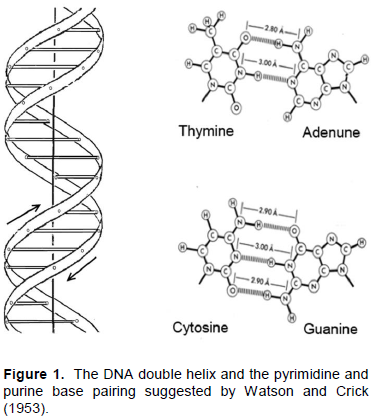 CALORIMETRY OF THE DNA DUPLEXES

FORCES HOLDING THE DNA BASE PAIRS

It appears that the base pairing and the base stacking are two tightly interconnected processes.  Indeed, pairing the bases requires their proper orientation; but proper orientation of the bases leads to their stacking; and vice versa:  the base stacking assumes proper orientation of the conjugate bases that is required for their hydrogen bonding.  Thus, these two steps represent a single cooperative act of the DNA double helix formation. Cooperation of the base pairing and base stacking explains the extreme efficiency of the DNA double helix propagation that proceeds with raise of its rigidity.  In this cooperative folding process, while the hydrogen bonds between the conjugate bases are of critical importance for the proper adjustment of the two complementary strands of DNA, the formed double helix is reinforced by the simultaneous stacking of the apolar bases.