Soil degradation, one of the causes associated with declining maize productivity is an environmental concern whose consequences are felt most strongly by poor people in developing countries. Indeed, the production of maize on soil fertilized with a combination of mycorrhizal fungi and half a dose of NPK has resulted in a production like that of the extension practice in Benin. This study aims, through an analysis of the financial profitability, to highlight the interest that maize production can generate with the production system using biofertilizer based on arbuscular mycorrhizal fungi (AMF) in Benin. The study was conducted among 100 randomly selected maize producers in 9 villages in South-Benin, Central-Benin and North-Benin. Economic profitability indicators including net margin, average labor productivity, and profit-cost ratio were determined. The results showed that regardless of the production area, maize cultivation with the AMF biofertilizer-based system was more profitable for producers (63,830 FCAF of net margin against 43,730 FCAF for vulgarized practice). Thus, agricultural policies could be oriented towards the promotion of maize inputs based on AMF bio-fertilizers to facilitate their availability to producers.

Maize (Zea mays L.), once considered a subsistence crop, is now experiencing an increase in production and the cultivated areas cover all regions of Benin (Hongbete et al., 2017). This cereal, whose production has long been limited to the southern areas of the country, has extended to cotton production areas in the northern regions (Yabi et al., 2013; Biaou et al., 2016). The average yield increased from 600 kg/ha in 1970 to 1.5 t/ha in 2012 (Adegbola et al., 2011; FAO, 2013; Dossa  et al., 2018). However, maize yield is still low in farming areas with the potential yield of the varieties that have been popularized, although with a maize consumption of 85 kg/resident/year, Benin is the leading consumer country in West Africa (Adegbola et al., 2011; Abadassi, 2014).

Soil degradation, one of the causes associated with the decline in maize productivity (Saidou et al., 2012) is an environmental  concern   whose   consequences  are  felt  most strongly by poor populations in developing countries. Thus, realistic approaches to substantially reduce the use of synthetic chemical fertilizers and pesticides, including the use of microorganisms, have been evaluated. Among the soil microorganisms that can be used in agricultural production, arbuscular mycorrhizal fungi (AMF) occupy an important place. Indeed, maize fertilized with the combination of mycorrhizal fungi with half a dose of phosphorus has resulted in a production like that of the peasant practice (vulgarized practice) in Benin (Assogba et al., 2017; Aguegue et al., 2017; Koda et al., 2020). Moreover, the work of Assogba et al. (2020) and Koda et al. (2020), respectively in Central and North Benin on ferruginous soil showed that soil fertilization with the contribution of the indigenous Rhizoglomus intraradices strain improved maize yield in farming areas by 38.2 and 13.21% compared to the vulgarized practice. From this work, it appears that the contribution of commercial or indigenous AMF in Benin makes it possible to reduce the use of mineral fertilizers without affecting plant growth and yield. This has as a correlative, a good soil quality regarding the effects of mineral fertilizers on soils with low organic matter content and the health of humans and animals. However, apart from production, profitability is a vital decision criterion for farmers (Tokoudagba, 2014). Many studies have addressed the economic profitability of maize production (Yabi, 2010; Paraïso et al., 2012; Tokoudagba, 2014; Miassi and Dossa, 2018). Unfortunately, none of them have examined a comparison of the economic performance of maize production with the vulgarized practice of the AMF bio fertilizer-based system, which could be a credible alternative in the context of declining soil fertility. This study was initiated to address this issue. It aims to assess the financial and economic returns from the use of mycorrhizal-based bio fertilizers in maize production in Benin.

The data used were collected from maize farmers at the research and development sites (RD) of Benin's National Agricultural Research System at the level of maize farmers to cover the entire country (Figure 1). Hundred (100) producers were selected (Table 1). Only the growers who had hosted the agronomic trial were surveyed. 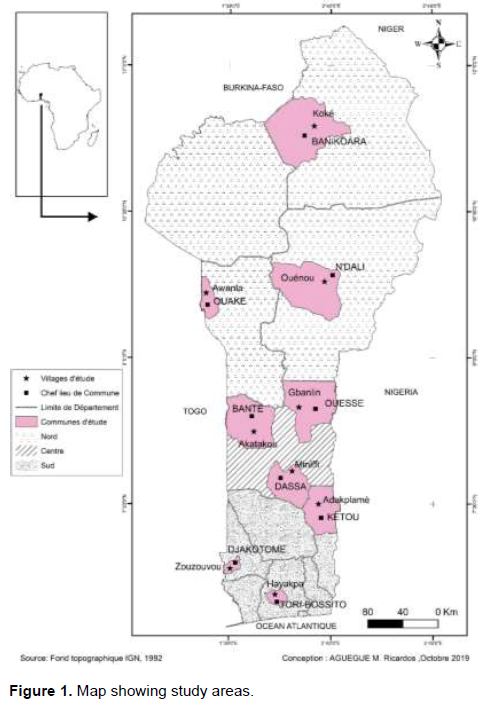 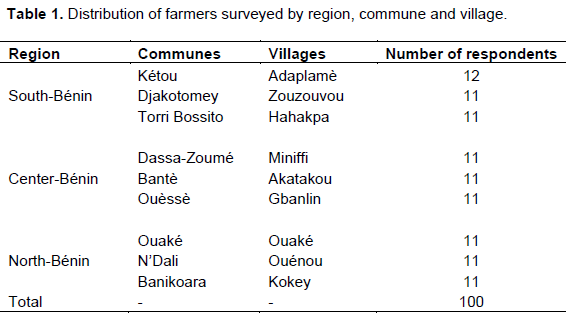 The main socio-economic characteristics  (age,  level  of  education,  share of income from agriculture, household size, disposable area, number of years of experience in agricultural production, number of years using chemical fertilizer) of the respondents were collected. Data related to maize production using organic fertilizers based on native mycorrhizal fungi included both variable and fixed loads. Variable costs included all costs related to the production of maize with the new technology, such as inputs (seeds, mineral fertilizers, bio fertilizers, plant protection products), labor from clearing or cleaning the plot to bagging the harvested maize, and various variable costs (transport and packing bags). The fixed costs had concerned the evaluation of the annual depreciation of materials and equipment used in maize production. These were mainly the hoe and cutter. Data related to grain maize output were also collected for the calculation of revenue. These data concerned the volume of grain maize obtained and the selling price of grain maize on the market in the study area.

The assessment of profitability is based on three indicators: Net Margin, Average Labor Productivity and Profit-Cost-Ratio.

The net margin in the rural economy is the value obtained after deducting the total production costs from the Gross Product Value (GP). The total cost is equal to the sum of the variable costs (VC) and fixed costs (FC). It is also the value obtained by deducting from the Gross Margin (MB), the Fixed Costs (FC) (Yegbemey et al., 2012). It is determined by the following formula: NM = MB-CF = PB-(CV+CF). Here, the CV represented the costs related to the current activity of the farm while the FC was the depreciation of small agricultural equipment used in maize production with native arbuscular mycorrhizal fungi. (1) If NM >0, then it is concluded that the Gross Product Value terms is able to cover both fixed and variable costs. The production is therefore economically profitable from a net margin point of view. (2) If NM<0, then the Gross Product Value terms did not cover all the production costs. In this case, production was not economically profitable.

Statistical analyses and statistical tests were carried out using the STATA 15 statistical software. The tests for comparing the average of the different indicators mentioned earlier were done using Student's t-statistic.

Socio-economic characteristics of the farmers hosting the trials

The average age of the producers was 43, the youngest producer was 17 and the oldest was 85 (Table 2). Indeed, this is the age range of the population open to innovation. They will a priori be ready to adopt organic fertilizers if the added value of this technology is well perceived by them. The average household size was 10 persons per household. With more than 20 years of experience in agricultural production, the producers had about 6 ha of fields at their disposal. However, large areas of available land (up to 48 ha) were observed in the central and northern regions of the country. The share of annual income from maize cultivation was at most 10%. Besides, the majority of producers (78.8%) had at most primary education, compared to 20% with secondary education. Only 1.1% of producers had  a  higher  level of education.

Cost of production of bio-fertilizers 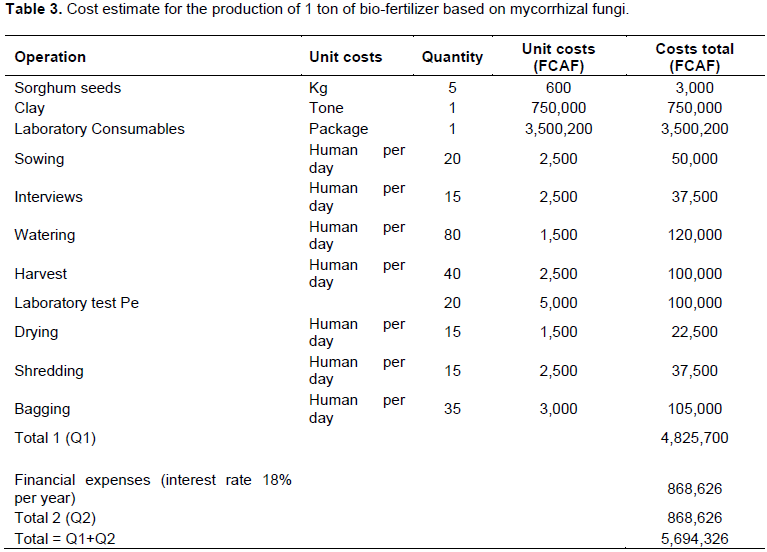 The production system using AMF organic fertilizer gave an average yield of 1966.5 kgha-1 while the extension practice gave an average yield of 2006.9 kgha-1 (Table 7). However, the results of the statistical tests did not reveal any significant difference between the AMF fertilizer yields and the extension practice (Table 7). Thus, maize production from the AMF organic fertilizer provides the same yields as the recommended extension practice. However, given the many environmental and soil fertility restoration benefits, the use of this new technology on a large scale and by maize growers can be recommended in the study areas.

The average labor productivity (ALP) was 2,464 F and 2,285 FCAF for the AMF organic production system and the peasant practice, respectively (Table 8). The ALP is higher than the average price of a man-day of labor. Thus, maize production with AMF-based organic fertilizers is also economically profitable from the point of view of wages obtained in the study area.

Market access for agricultural products remains the primary driver of production growth (Shiferaw et al., 2011; Di-Marcantonio et al., 2014), due to the prominent role that the market plays in the development of agricultural value chains. The results of this study showed that maize production  with   the  AMF  biofertilizer-based  system  is globally  profitable  from  an  economic  point  of  view.  In total, 222,520 FCAF were as variable expenses to produce one hectare of maize using the AMF biofertilizer system compared to 249,820 FCAF for the extension practice. The production of maize with the extension practice requires more investment because of the costs related to the purchase of mineral fertilizers. Moreover, fixed investments are the same for both production systems. The same equipment is used for both crops, that is, hoes, cutters, sprayers, etc., and the same equipment is used for both. It is at the level of variable costs that there is a large difference between the two cropping systems. The maize cultivation with the extension practice requires a large input of mineral fertilizer compared to the AMF biofertilizer-based system. The mineral fertilizers (NPK + Urea) used for maize production with the extension practice are twice as much as those applied with the AMF biofertilizer-based system. The cost of producing the bio-product would be even lower  for  a  production  of many ton. This is because the cost of bio produced from native AMF in this study is only an experimental cost. In the current context of the study, the absence of an agricultural development bank also affects the unit production price of the bio-product. Indeed, the existence of an agricultural bank will further reduce the interest rate (18% per year) on the credit and the cost of production of the bio-produced product. However, the use of the bio-product is economically more profitable than the use of 200 kg/ha of NPK and 100 kg/ha of urea recommended for maize cultivation in Benin.

Maize production with both production systems is profitable according to the theory of Perrin et al. (1976), which states that any farm activity is considered profitable when the profit-cost ratio is greater than 0.5. Their results confirm those of several authors who have shown that maize production is economically profitable compared to other speculations such as cotton, groundnuts, rice and carrots (Yabi, 2010; Paraïso et al., 2012; Tokoudagba, 2014; Miassi and Dossa, 2018). However, note that the values obtained from the benefit-cost ratios of production systems suggest that maize production with AMF biofertilizer-based system is somewhat more profitable financially than with the vulgarized practice.

The average age range shows that producers are open to innovation (Jatto, 2012; Maoba, 2016). They will a priori be ready to adopt organic fertilizers if the benefits of the technology are well perceived by them.

Benin is the largest consumer country in West Africa with an average level of maize consumption estimated at over 85 kg/resident/year. This study has shown that maize production is profitable in Benin. According to the calculated economic indicators, maize cultivation is more profitable with the AMF biofertilizer-based system than with extension practice. The AMF biofertilizer-based system reduced the use of mineral fertilizers and consequently their variable production costs. Agricultural policies need to subsidize the large-scale production of this organic fertilizer as in the case of cotton production. This action will make it possible to glimpse prospects for revitalizing maize production in the context of improving the living conditions of maize producers and the health of Benin's soils.

The authors declare that there are no conflicts of interest regarding the publication of this article.

The authors would like to thank  the  National  Institute  of Agricultural Research of Benin (INRAB in French) for funding this work.