Tomato leaf miner, Tuta absoluta (Meyrick) (Lepidoptera:Gelechiidae) is an important pest of tomato crops native to South America. It is considered to be one of the major pests of tomato crop in Ethiopia since 2012. The aim of this study was to determine the economic threshold level of T. absoluta under glasshouse conditions. The damage potential and economic threshold level for T. absoluta larvae on tomato crop were studied during 2015 to 2016 under glasshouse conditions. Significant (P < 0.05) differences were observed among the treatments during the study period. The number of larvae per plant reduced the yield to the extent of 10.51 to 75.62% during 2015, and 11.87 to 80.22% during 2016 cropping season. The mean values of marketable yield gained to the cost of insecticide application at 0, 1 and 4 larvae per plant were 34,913, 31,006 and 16,574.5 kg/ha from 2015 to 2016, respectively. The lowest yield was observed at control/unsprayed treatment (7,751.5 kg/ha). The economic injury level (EIL) lies at the pest population density where Benefit-Cost ratio would be 1.08. From this study, the ElL of T. absoluta was determined as 3.0 larvae per plant based on the findings of glasshouse experiments conducted over the period of two years. The economic threshold level (ETL) was worked out at 2.25 larvae per plant during the same years under glasshouse conditions.
Key words: Economic, infestation, injury, larva, management, threshold, tomato, Tuta absoluta, yield.

Tomatoes are produced by small and medium scale farmers for fresh consumption, and as a source of income (Bawin et al., 2014; Retta and Berhe, 2015). Tomato for consumption as fresh vegetable is produced under open fields and greenhouse conditions. It can be eaten either fresh or processed into different products. It is a vegetable crop of large importance throughout the world (Abdussamee et al., 2014; Mehraj et al., 2014; Kaur and Rishi, 2014). It is an important source of nutrients (vitamins A, B, C and E), and constitutes an important part of household diet and national economy (Baloch, 1994; Bhowmik et al., 2012; Kaur and Rishi, 2014). Tomato (Lycopersicon esculentum Miller) production is threatened by multiple insect pests. Among these pests, tomato leaf miner, Tuta absoluta (Meyrick) (Lepidoptera:Gelechiidae) is a dangerous pest of tomato crops native to South America (Filho et al., 2000). T. absoluta has a wide geographical distribution throughout the world, attacking a wide range of host plants (Desneux et al., 2010).
It is considered as the most severe pest against the tomato plant in Mediterranean Basin, and also in Africa, where it has become much more abundant over recent years particularly in Ethiopia (Gashawbeza and Abiy, 2013). Larvae of this pest feed mainly on leaves and fruits of tomato. Economic injury level and economic threshold level (ETL) of T. absoluta depend on the population size and infestation level. However, the decision making management action of this devastating insect pest is not known in Ethiopia until now. There are two basic items of the management decision; the economic injury level and economic threshold level (Stern et al., 1959; Pedigo et al., 1986). Integrated Pest Management (IPM) poses some of other considerations for the estimation of economic injury level (ElL). It involves substitution of information for pesticide application, recognizing costs of pest control beyond the direct chemical and application costs, and consideration of management options to reduce the necessity for chemical treatment.
The challenge is to incorporate more host and pest dynamics into the economic injury level, which can help to verify the pest management decisions and to recognize more efficient economic thresholds. To manage T. absoluta larvae, pest management programmes employ intensive curative and/or preventive treatments that are economically unjustified. However, to control T. absoluta a number of chemical treatments are applied arbitrarily during the infestation of this insect pest with no regard to economic benefit. The applications of economic injury and economic threshold level analysis for the calculation of cost/benefit (C/B) ratios in order to control T. absoluta, demonstrate the definition of the ElL advanced by Pedigo and Higley (1992) to estimate the cost-benefit ratios. This study was initiated to quantify the marketable yield loss from larval feeding of the tomato plants, and to estimate the EIL in order to determine economic threshold level per plant, when and how many times control measures against this devastating insect pest are justified economically. Hence, the objective of this study was to determine the economic threshold and economic injury level of T. absoluta under glasshouse conditions.

The experiment was conducted at Ambo University experimental glasshouse in dry seasons during 2015 to 2016. The experiment was laid out in randomized complete block design (RCBD) with three replications. There were seven treatments consisting of six different larval densities, that is, 0, 1, 2, 3, 4, 5 and control per plant. Tomato seedlings were planted into plastic pots maintaining 80 cm row to row distance of plants. Eggs were introduced into each treatment to know the status of larval densities. The numbers of larvae established in each treatment are sprayed with standard chemical (Coragen, 200 SC) of 200 ml/ha according to larval densities of T. absoluta. The number of total damaged leaves and fruits was counted, and fruit yields were weighed for each treatment. Relationship between the larval densities and the number of leaf and fruit damaged was worked out by correlation co-efficient and regression equations. Yield losses, due to different treatments, were calculated by deducting the yield of the respective treatment from the yield of control (where no egg and larva protected treatment). The value of yield losses was determined according to the wholesale market price of tomato at current market situations. Benefit cost ratio (BCR) was considered as the ratio of the yield value saved to the cost of insecticidal application. Standard chemical was considered for calculating the cost of insecticidal application. The ETL was determined based on the benefit cost ratio, as suggested by Farrington (1977).
Data collection
The periodical counts of damaged leaves and fruits were taken from each pot, where the leaves and fruits have been checked for larvae. However, when the sprayable level was attained, the pots were sprayed one day later with the appropriate insecticides, according to the pest situation.
Data analysis
The obtained data were analyzed using the statistical software package (SAS, 2009) for analysis of variance of the experiment. The economic threshold level for leaf miner larvae was calculated by fitting regression equation Y= a + bx, between larval population levels and Benefit Cost Ratio. The larval density corresponding to unit benefit cost ratio was the economic injury level, and economic threshold levels were set at 75% of EIL (Pedigo, 1991). Benefit-cost ratio was calculated using the following formula:

Actuality, the EIL value can be complicated to calculate the exact number because of the dynamic nature of pest infestation level, damage system and crop value. However, the economic injury level (EIL) is often expressed mathematically by the following formula: 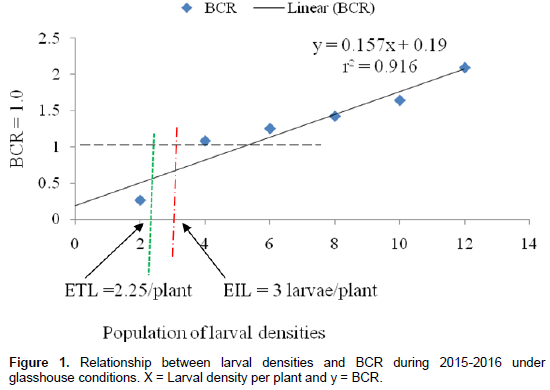 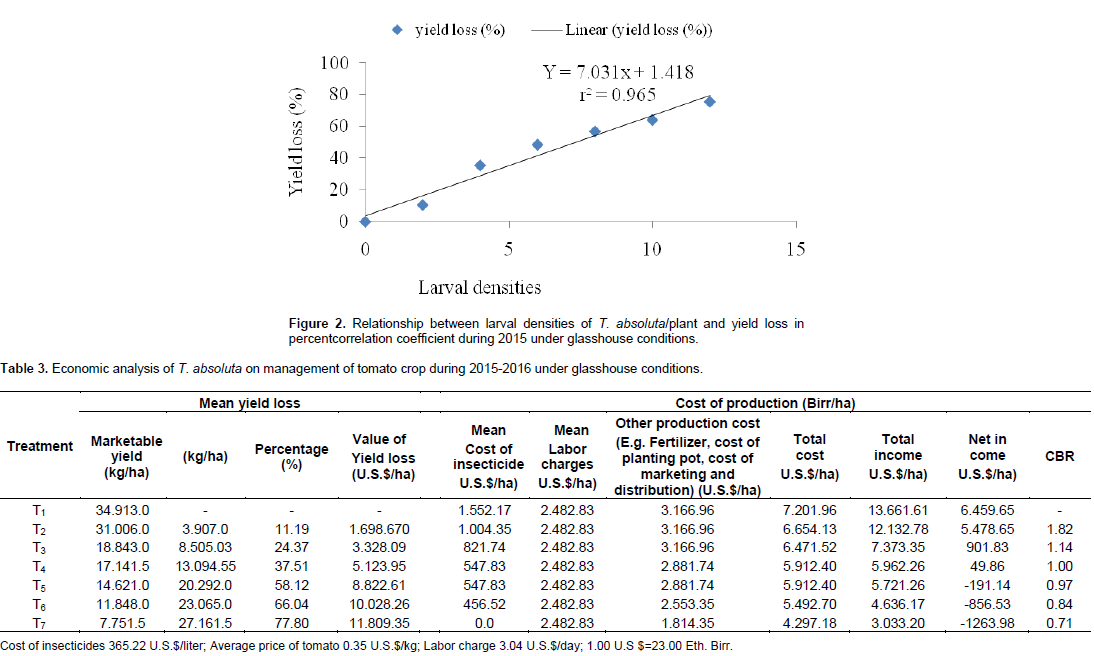 Benefit-cost ratio, economic injury level and economic threshold
The cost of T. absoluta control (cost index in EIL formula) was estimated by adding the cost of insecticide per plant, number of pest/plant, total cost of plant production and yield loss percent/plant. The ratio of the value of yield saved to the cost of insecticide application at three larvae per plant was 1.08 during 2015 to 2016. EIL lies at the pest population density where BCR would be 1.08. In order to calculate the exact larval density at which BCR would be 2.25 larvae, the correlation of larval density (X) with the BCR (Y) was calculated. There was a strong positive correlation and linear relationship between those two variables (Figure 1). The regression equations derived were y= 0.157x + 0.19 during 2015 to 2016. The study results were consistent with those results of Pedigo and Higley (1992) who reported that to recapitulate the primary variables to define the ElL is not a discrete pest density, but its variable depends on the control costs, the value of the production protected, production losses per pest, and the efficacy of the control. It should be noted that the estimate of damage caused by pests rather than pest density is very important for tomato leaf miner, T. absoluta. From the aforementioned equations, the EILs of T. absoluta larvae were determined as three larvae during 2015 to 2016 (Figure 1). On the basis of means of two years, the EIL value was 3 larvae per plant under glasshouse. Therefore, the economic threshold level was determined as 2.25 larvae per plant.
Yield loss-larval population relationship
Data of the larval density and yield loss % were summarized in Table 1, and illustrated in Figures 1, 2 and 3, for each year of the experiment. Each of the larval density and yield loss % was in a strong positive correlation, and linear relationship between those two variables was shown. The regression equations derived were y=7.013x + 1.418 during 2015/16, and under glasshouse conditions during 2015 and y = 6.410x + 8.550 during 2016. The values of the parameters for calculation of yield loss and EIL over the two years of the experiment are presented in Figures 2 and 3. Number of larvae indicates that initiated control prevented pests from causing economic injury while number of larval population rate above the limit indicates that the economic threshold was inadequate to prevent an increasing infestation from causing economic damage. The economic threshold is the population level where insect control should be initiated to avoid exceeding the economic injury level. The ElL is the most persistent and influential element in pest management. Indeed, ElL and ETL continue to function as the primary mechanisms for making pest management decision (Sarmahl et al., 2011). Many authors (Stern et al., 1959; Stone and Pedigo, 1972; Smith and Vanden Bosch, 1967; Ram and Patil, 1986) highlighted the importance of ElL and ETL in pest management for different crop plants. 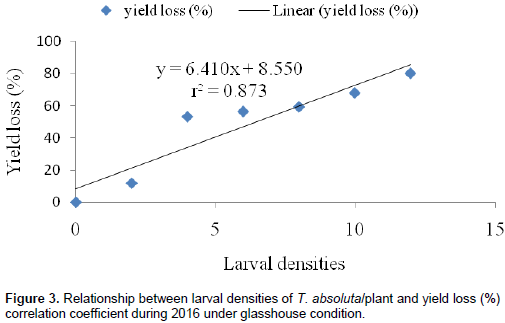 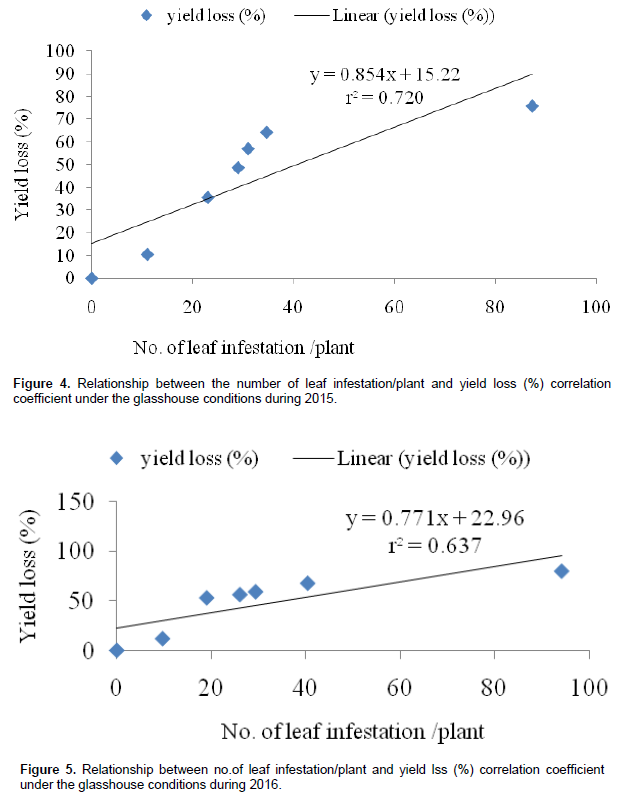 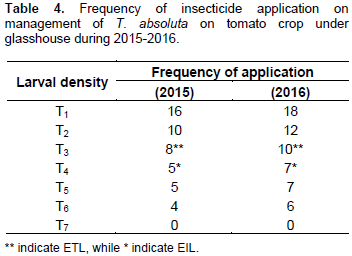 This study shows that the determination of economic injury level and economic threshold level tool for timely control of T. absoluta under glasshouse conditions in Ethiopia is better than the most common current practice of insecticide applications. For Tomato growers under favorable climatic conditions, T. absoluta infestations 2.25 larvae/plant do not affect tomato yield under glasshouse conditions. Results of the present study revealed that the control measures should be initiated when the T. absoluta larval population reaches 2.25 larvae per plant in glasshouse in order to prevent the population from reaching economic injury levels. The frequency of application time also depends on infestation level of T. absoluta. Finally, both entomologists and economists have the same working definitions for economic injury and economic threshold levels for insect pests. Further, both disciplines are struggling together to find ways to account for the costs and benefits ratio of T. absoluta management strategies under open fields.

The authors would like to acknowledge Ambo University and Addis Ababa University for financial support. We greatly appreciate Ambo University, College of Agriculture and Veterinary Sciences, Department of Plant sciences, for giving us the privilege to access the glasshouse. We would like to express our sincere appreciation to Dr. Lemma Zemedu from Haramya University for his guidance and comments. We also appreciate Mr. Fikadu Balcha and Mr. Alemneh Abebe for their field work and data collection.