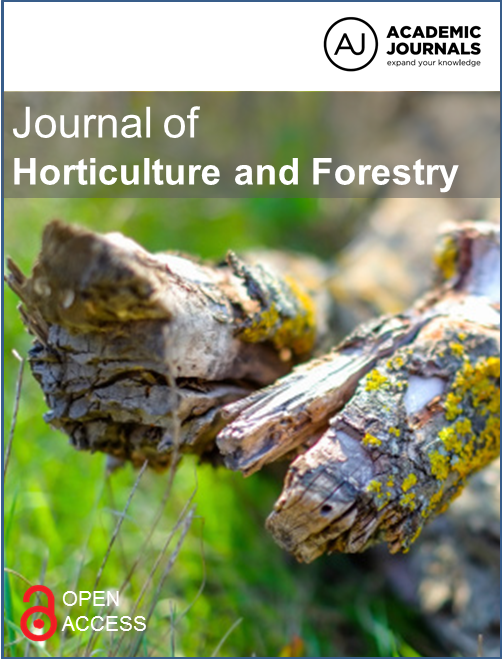 The sources of water for crop production are rainfall and irrigation water. The two types of agriculture seen from the perspective of water management are rain fed and irrigation agriculture which both helps to present sufficient water in the root zone for germination, evapotranspiration and nutrient observation (Dupriez and De Leener, 2002). In Ethiopia irrigation is used as complementary with rain fed during dry season. One  of  the  irrigation  methods  in agriculture is furrow irrigation. This technique has been used for a variety of crops. Improving small scale farmers need to consider efficient utilization of irrigation water (Shuhuai et al., 2012). Agronomic practices have a profound effect on farm water management practices. A number of factors such as nature of cultivar, plant density, sowing time, and nutrient and water management are involved   in  affecting  profitable  yield  Masoud  and Ghodratolah (2010)

In the study area, farmers furrow dimensions by using animal power and local material prepared for plow. However, this material is made of different dimensions for using it at different points of the furrow length. The irrigation water diversion to the field is being done without considering design of furrow dimension. The release of high flow rate overtops the furrow section and takes off the soil resources as surface runoff which in turn reduces the nutrient of the soil. This phenomenon occurs if the furrow dimensions do not suite the incoming flow rate depending on the soil type of the area. The problem leads to erosion and frequent need of furrow construction. In other hand, application of very low flow rate results in deep percolation at furrow head while, other part of the furrow become under irrigated. Consequently, these practices are known to produce greater chance of water logging, tail water losses, salinity hazards, high yield loss and lower economical profit (Walker, 2003). Problems of irrigation water management leads to shortage of water and competitions among different agricultural and non- agricultural demands. The need of suitable water resource management is, therefore, serious concern for enhanced water use among different sectors. Proper use of furrow widths, depth, and length is one of the practices in irrigated agriculture to maximize irrigation efficiencies and enhanced crop yield as well as the water use efficiency. In addition, it can enable the users to conserve  soil  and  water  resources. This study will provide indicative information on the response of irrigation performance indicators, yield and water use efficiency of onion due to the proper furrow dimensions.

In west Shoa zone of Oromia Regional state, onion is often produced by furrow irrigating under the limited water available for irrigation and onion crop is the most common irrigated horticultural crop in the district. Farmers growing onion crop in this area have not been practicing furrow management practices. Hence furrow management practice that can improve irrigation water productivity of small scale onion producing farmers is important in the area. This study investigated the effect of different furrow dimensions on irrigation water productivity and yield and yield components.

A field experiment was carried out in 2017/2018, at Jato Derke which is administratively located in Ilu Gelan district of West Shoa Zone in the Oromia Regional State (Figure 1). This site is considered a representative site for the midland irrigation schemes of West Shoa Zone of Oromia Regional State. It is located at 08°59’51’’N latitude and 37°19’49’’E with an altitude of 1812 m above sea level. The minimum and maximum monthly average temperatures are 13.8 and 28.1°C, respectively. The average rainfall is around 1351 mm and this site has limited irrigation water that   cover   a  large  hectares  of  farmland  in  which  onion  is  the dominant crop grown in the command area followed by different horticultural crops. 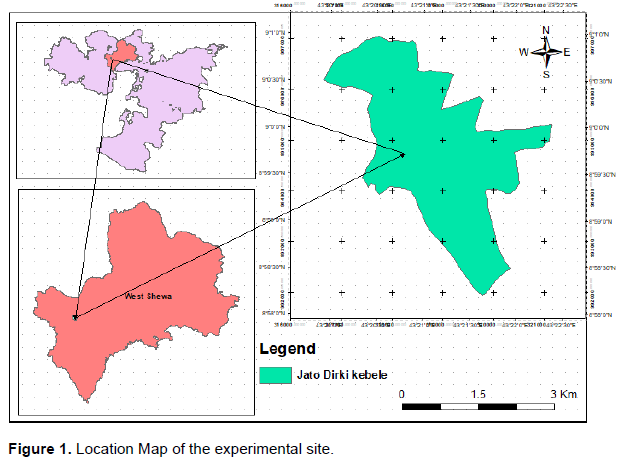 The experiment was laid out in Randomized Complete Block Design (RCBD) with four replications. There were three levels of furrow dimensions with incoming flow rate measurement and this has a total of three treatments. The plot size was 8 m × 5 m and the distance between replication and plots were 2 and 1 m respectively. The plots in each replication were represented randomly for each treatment. The experimental field was fertilized UREA (46 Kg N ha-1) and DAP (92 kg P2O5 ha-1), (Melkasa Agricultural Research Center, 2000). The DAP was applied at basal but UREA was applied both during planting and three weeks after plating (1/3rd at basal and 2/3rd three weeks after planting). The experimental plot was ploughed three times before planting and managed carefully from weeds to minimize water and nutrient competition with crop.  The variety of experimental crop was Bombay red onion variety and transplanted with spacing of 40 cm and 20 cm spacing between rows and plants, respectively (Table 1).

Furrow dimensions were made based on farmers dimensions. Most of the farmers in Ethiopia are make furrows using traditional ways of furrow making. In traditional furrow making furrows were made by local material pulled by oxen power. Furrow size made by this method is considered as farmers furrow dimension (top width of 23 cm, bottom width of 13 cm and depth of 11 cm). Other treatments were made based on the farmers furrow dimension that is, by taking above and below farmer’s dimension. Furrows of T2 and T3 were closed end and the applied water was slowly infiltrated into the root zone. But un-designed or farmer practice was an open ended and the water was lost as surface runoff at the end of furrow length.

Water application efficiency is a measurement of how effective the irrigation system is in storing water in the crop root zone. It is expressed as the percentage of the total volume of water delivered to   the   field   that   is   stored   in   the   root   zone   to   meet  crop evapotranspiration (ET) needs.

Wf = water delivered at the head end of the furrows, cm.

Water distribution efficiency is defined as the percentage of difference from unity of the ratio between the average numerical deviations from the average depth stored during the irrigation. It was determined using the following formula:

d=Average depth of water stored in root zone along the furrow after irrigation, cm

Plants   that   successfully   established  in  the  central  rows   were counted at harvest and expressed as percentage.

This  was  measured  from  the  ground  to  the  tip  of  the  leaves  from  10  randomly selected plants at maturity.

This referred to the weight of healthy and marketable bulbs that range from 20 to 160 g in weight. Bulbs below 20 g in weight were considered too small to be marketed whereas those above 160 g were considered oversized according to Lemma and Aklilu (2003). This parameter was determined from the net plot at final harvest and expressed as t ha-1.

Characterization of the soil of the study site

About 0-60 cm depth of disturbed (composite) and undisturbed soil samples were collected from different points by using soil auger and core sampler respectively for the analysis of physical and chemical properties. The composite sample (after being well mixed in a bucket) of about 2 kg of the mixed sub samples (composite sample) was properly bagged, labeled and transported to the laboratory for analysis of soil chemical properties. The soil pH was measured potentiometrically with a digital pH meter in the supernatant suspension of 1:2.5 soils to water ratio. The soil electrical conductivity measurement was done using a conductivity meter at 25°C using its standard procedures. Field capacity (FC) and permanent wilting Point (PWP) of sampled soil were determined using pressure plate apparatus at 1/3 and 15 bar, respectively. The soil texture was measured from samples collected at different depths using hydrometer method. The textural class of the soil profile was determined using USDA textural triangle.

Soil sample collected from the study site was analyzed for some chemical properties such contents of Nitrogen, Phosphorus, Organic matter, and soil pH and   as well as exchangeable cations.

The collected data were arranged and organized for the suitability of statistical analysis and finally analysis of variance  (ANOVA)  was performed using statistix.8 software. Least significant difference (LSD) at 5% level significance was used to make mean separation among treatments.

Laboratory analysis of particle size distribution indicated that the soil is clay in textural class throughout the soil depth with an average particle size distribution of 34% sand, 21% silt and 45% clay whereas the average gravimetric moisture content at field capacity and permanent wilting point were 33.02 and 24.8%, respectively. The value of bulk densities (1.303 gcm-3) were obtained by considering the average of the 0-40 cm depth. This value is in the recommended range for crop production. The average total available water was found to be 106.8 mm/m. The pH in H2O under this study area is ranged in optimum value as suggested by Jones (2003) (Table 2). An electric conductivity of 0.035 ms/cm was recorded which is at lower limit of saline soils, hence the soil samples are non-saline soils (Table 2). Plants growing in this area do not have the problem of absorbing water because of the lower osmotic effect of dissolved salt contents. 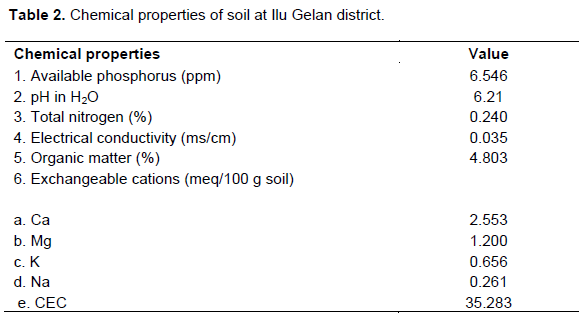 The total nitrogen of study area as suggested by Tekalign (1991) rated as high percent which is suitable for plant growth (Table 2). Since the plant obtains phosphorus (P) from the soil solution through its roots or root symbiosis, available P is composed of solution P plus P that enters the solution during the period used to define availability. As per the rating suggested by Jones (2003) the available P of soil of experimental field of the studied area was qualified as low (Table 2). As per the ratings recommended by Hazelton and Murphy (2007), the CEC value of the agricultural land of the present study area is in high value range.

The high CEC value recorded may be attributed to the fact that soils which recorded high CEC accumulate high percent OC and has greater capacity to hold cations thereby resulted in greater potential fertility in the soil (Table 2). The value of available Ca and Mg were below the optimum range whereas that of K was within the recommended optimum range as suggested by Takuya et al. (2013) (Table 2). The organic matter was rated as medium which is suitable for crop growth (Table 2).

Analysis of variance showed that, there were significant differences among the means of plant height and grain yield (Table 3). There were significant differences between treatments T2 and other two treatments in plant height. However no significant variation was recorded between treatments T1 and T3. Plant height ranged from 39.28 to 41.53 cm under T1 and T2 respectively. Significant difference was obtained among all means of treatments under grain yield. The highest grain yield (19520 kg/ha) was gained from T2 when compared with the lowest (15088 kg/ha) observed in T1. This was due to blockage of designed furrow at the end of its length and the required crop water requirement was satisfied. In the end blocked furrow, the water only infiltrates to the crop root zone and runoff is reduced. This increases appropriate utilization of delivered irrigation water such as irrigation efficiencies, water productivity and crop yield.  About 13000 to 16000 kg/ha has been produced under local farmers’ experience. Similarly, previous research findings reported by Guesh (2015) found a closer result for the same crop. There were no significant differences in percentage of stand count of onion among all treatments as shown in Table 4.