Seed germination and plant growth are greatly influenced by external  conditions  such  as  the  intensity  and  duration  of  light  and temperature. Aside from its effect through photosynthesis, light influences the growth of individual organs or of the entire plant in less direct ways. The most striking effect can be seen between a plant grown in normal light and the same kind of plant grown in partial darkness or total darkness. The plant grown in  the partial dark or total dark will have a tall and spindling stem. According to Dennis (2009), the leaves of plant deficient in light fails to expand in both length and width, lacking chlorophyll and are always pale yellow colour, as such a plant is said to be etiolated.

Light intensity and its duration (length) may have different and characteristic effects upon plant growth and development. It has been found that the length of the day light period may have a striking effect upon vegetative growth and reproductive activities of plants. The reaction of plants in relation to the length of the day is called photo-periodism (Dennis, 2009). Despite the economic, nutritional, cultural and social importance of Jatropha curcas, especially to rural dwellers that depend on them, it has been greatly neglected, especially with respect to their regeneration. Due to lack of care and old age, a lot of trees have died or are in the process of doing so, thus the species is classified among the endangered tree species (Turner et al., 2011), with a high possibility of going into extinction in the near future except something is done to increase its population.

Allowing the species to go into extinction will endanger the livelihood of millions of rural dwellers in Nigeria and reduce the rich biological diversity of the ecosystem. Artificial regeneration and subsequent improvement (domestication) appears to be a very viable option of saving the species from extinction and ensuring that its products are supplied on sustained basis. The need to rapidly domesticate tropical forest food tree species has been stressed and is now one of the three pillars of the International Centre for Research in Agroforestry (ICRAF) program (Leakey and Simons, 1998).

Early growth of forest seedlings is affected by some factors such as light intensity, air, temperature, water, soil condition, etc. Except these factors or their combinations are provided at the right time and in good quantity, seed germination and growth of seedlings may be adversely affected. Till date, research work on the effect of light intensity on the early growth of Jatropha curcas seedlings is scanty, which is the focus of this study.

The study was conducted in the Department of Forestry and Wildlife Management Nursery Unit, Modibbo Adama University of Technology, Yola (MAUTECH) Adamawa State. The study area lies between Latitude 9° 35′ N and 10° 25’ N and Longitude 12° 55′ E and 14° 35’ E at an altitude of 158.8 m (Figure 1). It covers an area of about 54 ha. The soils of the study area as classified by USDA are Alfisol and Inceptisols. It ranges from sandy loam underlined by salty clay, deep loam underlined by salty clay to sandy loam. Soil pH is acidic (6.5-6.9) whereas total nitrogen and phosphorus is low. 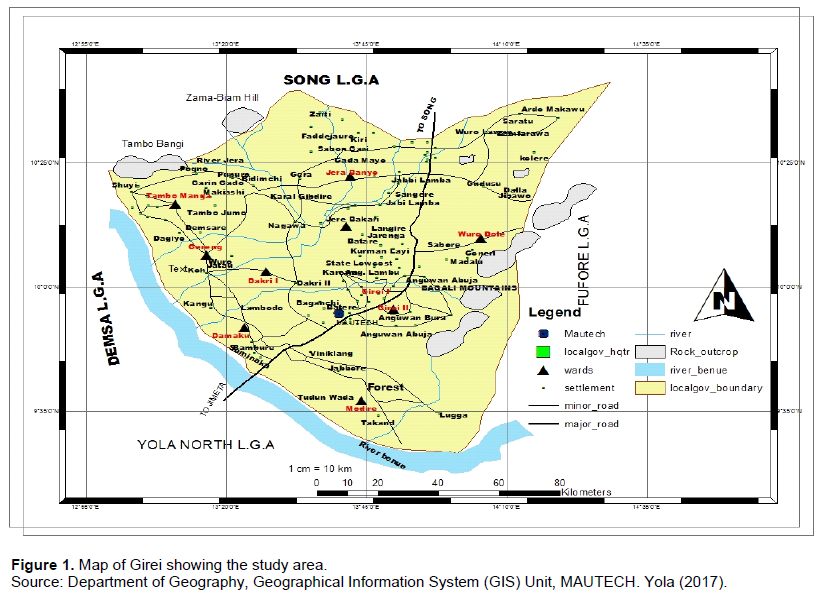 Generally, the area is semi-arid and is of low fertility (Musa, 2006). The rainfall starts in April and becomes more intense in August and September and periods of no rainfall exist between January and March. Temperature varies between 26.9°C and 27.8°C mean annually while the minimum temperature can be as low as 18°C between December and January and maximum temperature about 40°C, depending on the season of the year. The relative humidity of the study area varies between 30 - 80% depending on the particular period of the year (Adebayo and Zemba, 2020).

The seeds of J. curcas were procured from Jos seed bank and were sown in polythene pot at the Departmental nursery. The seeds were subjected to a pre-germination test for 3 days before planting. Two weeks after planting, the seedlings were arranged under different light intensities. The amount of light falling on the seedlings was reduced by 20, 40 and 60%, using constructed wooden box made up of single, double and triple wire gauze, 1 mm in size. The amount of light (Candela) received by each treatment was measured, using, photometer.

Completely randomized design was used for this study, in which thirty (30) seedlings (10 replicate) were randomly selected out of the germinated seedlings and arranged under each of the constructed wooden box labelled T1, T2 and T3 respectively for assessment. Another ten (10) seedlings were also set aside under direct sunlight, which serves as control (T0) making a total number of forty (40) seedlings used for this study.

The following parameters were assessed for 42 days (6 weeks) under each of the randomized treatments (T) and recorded.

i) Height (cm): The height of the seedlings was assessed, using a calibrated ruler.

ii) Leave count: This was carried out by counting the number of leaves per plant.

iii) Girth (mm): The girth or collar diameter of the seedlings was measured using veneer caliper.

The result (Table 1) revealed that, the highest mean height (29.2 ± 1.94 cm) was observed  in seedlings covered with 60% wire gauze; this was followed by seedlings covered with 40% wire gauze (29.1 ± 2.06 cm), while the lowest mean height (27.0 ± 1.24 cm) was observed in the seedlings without light intensity restriction (0% wire gauze). The analysis of variance (Table 2) conducted revealed that there was no significant difference among the four treatments. This implies that light intensity has no effect on J. curcas seedling height at their early germination stage (P > 0.05).  However, Droppelmann et al. (2000) observed that under conditions of shading, evapo-transpiration is reduced, which favours moisture conservation for use by the plant thus, light of a lower intensity required for seedling establishment.

The result on the amount of light received by each of the treatment shows that the control treatment-T0 (0% wire gauze) has the highest light intensity (456.6 cd); this was followed by T2 (20%) and T3 (40% wire gauze) with 287.5cd and 187.5cd respectively, while the least amount of light intensity (150.8cd) was observed on T4 with triple wire gauze (60%). This indicated that the thicker the intensity restriction barrier, the less the amount of light being received by the seedlings. Generally, plants use light to perform the process of photosynthesis which uses light energy to combine carbon-dioxide with water to make sugars and oxygen. The higher the intensity, the more rapid this process of photosynthesis takes place. The result is in line with that of Lajzerowicz et al. (2004) and Nwoboshi (1982) in their respective work that light intensity aids in adapting plants to specific niches in the environment and often interacting with temperature. The amount of solar energy available for these processes depends   upon    the   intensity   and   quality,  especially beneath the forest canopy and it also influences the establishment of tree seedlings.

Conclusively, the finding has shown that, J. curcas seedlings required light for its survival, but at varying intensity. It was noticed that the thicker the light regulator (wire gauze), the lower the amount of light being absorbed by the seedlings. The finding also showed that light intensity has most significant effect on J. curcas stem girth and number of leaves as compared to seedlings height. It is believed that light is an absolute requirement for plant growth and development, and has been considered as one of the most important physical factor affecting tree growth, especially at the early seedling stage.

This study has shown that there was no variation among height, girth and number of leaves J. curcas, whereas there was significant difference in the light intensity as well as biomass estimation. However, the following recommendations are made:

i) Plantations of J. curcas seedlings should be established at the departmental level for commercial purpose as its seeds are used to produce bio-diesel.

ii) Further research should be conducted into the stem cutting aspect of J. curcas in the Northern part of the country.

iii)  Further researchshould  also  be conducted on the process of extracting bio-diesel from J. curcas seeds in

the Northern part of the country.

iv) Light meter (either analog or digital) should be purchased, to enable more research on light intensity among students of the department.