Watermelon [Citrullus lanatus (Thunb) Matsum and Nakai] is rich in vitamins C and B complex, and the red color of its pulp is due to the presence of lycopene. Lycopene is an antioxidant component and it is able to neutralize free radicals especially responsible for skin aging. Thus, a formulation containing lycopene extracted from watermelon was developed, and its physical-chemical stability and in vitro antioxidant activity were evaluated. For this, watermelon endocarp was separated and heated for pulp obtainment. Lycopene was extracted from watermelon pulp with acetone and ether successively, spectrometric quantified, and finally had its in vitro antioxidant activity determined using 1,1-diphenyl-2-picrylhydrazyl (DPPH) assay. The resulting extract was then incorporated in an emulsion, which was submitted to physical-chemical stability study at different conditions. Results show the presence of 38 µg of lycopene/g of watermelon pulp and 68.78% of DPPH inhibition, presenting antioxidant activity by in vitro assay. The developed formulation was stable when submitted to stress conditions and results point that it should be conserved in opaque packaging. Thus, it was possible to conclude that lycopene extract from watermelon pulp can be considered as a source of antioxidant component to be used in cosmetic formulation combating skin aging.

A diet containing fruits and vegetables is recommended by health agencies and has been related to decreased diseases’ risk due to its antioxidants components. One of those components are carotenoids, which are responsible    for    yellow,   orange   and   red   colors   of vegetables and fruits such as tomato, papaya, guava, apricot and watermelon (Davis et al., 2006; Kong et al., 2010; Sies and Stahl, 1996). Watermelon [Citrullus lanatus (Thunb) Matsum and Nakai] originated from Africa and has been cultivated for over 5000 years. About 4000 years ago, it was introduced in Egypt and Middle East, arriving in America in the 16th century (Edwards et al., 2003; Naz et al., 2013).
It is a very popular fruit in Brazil, and its consumption is only smaller than the consumption of tomato, potato and onion (Andrade Junior et al., 2007). Lycopene (C40H56), a liposoluble carotenoid present in watermelon pulp, has a symmetrical and acyclic structure, formed by carbon and hydrogen (Bramley, 2000; Schieber and Carle, 2005; van Breemen and Parkovic, 2008). Its structure has also 11 conjugated and two non-conjugated double bonds (Figure 1), conferring its antioxidant property (Sies and Stahl, 1996).

According to Andreassi et al. (2004), lycopene is able to neutralize reactive oxygen species such as singlet oxygen (1O2), which can be a very attractive property, once the human body’s antioxidant enzymes (for example, superoxide dismutase, glutathione peroxidase and catalase) are not able to combat this radical. Singlet oxygen, generated by sunlight exposure, has been acknowledged to various oxidative stress effects on epidermis, such as thickening of epidermis, loss of firmness and reduction in elasticity leading to an acceleration of ageing process (Scotti and Velasco, 2003). Also, free radicals occurrence cause reduction of antioxidant substances in skin, and therefore the use of topical antioxidants may diminish or even avoid the skin ageing (Andreassi et al., 2004; Giacomoni, 2007; Isaac et al., 2008).
To provide satisfactory anti-aging action through antioxidant activity, the formulation should be stable and allow the effective release of active ingredient into the skin. According to ANVISA (Anvisa, 2004) and EMEA (Emea, 2003), stability study evaluates safety and efficacy of formulations, indicating product behavior when submitted to different environment conditions within a time frames. During the development of a new formulation, it is important to evaluate stability, prevent physical-chemical degradation and macroscopic instabilities (Anvisa, 2004; Cefali et al., 2015a). Therefore, the aim of this study was to obtain lycopene from watermelon pulp, and to incorporate extracted lycopene in cosmetic formulations as a potential anti-aging agent.

In vitro antioxidant activity assay of lycopene extract
Two and half milliliters of different extract concentrations (20, 40, 60, 80, 85, 90, 95 and 100%, v/v), diluted in ether, were placed in test tubes to which 2.5 mL of DPPH solution (0.004%, w/v in ethanol) was added, according to Cuendet et al. (1997) and Rufino et al. (2007). The assay was also performed for quercetin as antioxidant standard at concentrations of 0.25, 0.5, 1.0, 1.75 and 2.5 μg/mL and the inhibition percentage was calculated.
Development of an emulsion containing lycopene extract
An oil-in-water (O/W) emulsion was prepared according to Table 1, using the standard method (Prista et al., 1996). Lycopene extract obtained from watermelon was directly incorporated into the emulsion at a concentration of 5.0% using geometric dilution method.
Stability study of phytocosmetic
Phytocosmetic was evaluated according to stability assay recommended at stability guide of cosmetic products of ANVISA – Brazilian’s National Health Surveillance Agency (Anvisa, 2004). For the study, emulsions were stored at different temperatures [5±4, 45±2, -5±2ºC and room temperature (27±2ºC) protected and exposed to indirect light]. Formulations were then submitted to macroscopic assessment (color, odor, appearance and phase separation) and pH tests over 15 consecutive days (preliminary stability test) and over 90 days for the accelerated stability test (assays performed on days 1, 7, 15, 30, 45, 60, 75 and 90). For freezing and thawing cycles,  the  phytocosmetic  was  subjected  to alternating cycles of heat (45±2ºC) and freeze (–5±2ºC) temperatures for 24 h over 12 consecutive days. To be considered stable, results variation should not exceed 10% (Anvisa, 2004; Isaac et al., 2008). For pH measurement, a 10% (w/w) aqueous dispersion of samples was prepared in recently distilled water. The pH meter (Gehaka, model PG 1800, São Paulo, Brazil) electrode was directly inserted into the aqueous dispersion (Davis, 1997). A value compatible with skin pH (5.5 to 6.5) was deemed acceptable in the stability tests and variations in the results should not exceed 10%. Stability of the lycopene incorporated in formulation was also determined by spectroscopy at 472 nm. For this, 3 g of phytocosmetic was diluted in 30 mL of ether, filtered and submitted to spectroscopy analysis in the first day of stability study and after 30, 60 and 90 days stored to stress conditions (Cefali et al., 2015a).
In vitro antioxidant activity of phytocosmetic
Three grams of phycocosmetic diluted in 30 mL of ether was filtered, and 2.5 mL was transferred to tube with 2.5 mL of DPPH solution (0.004%, w/v in ethanol) and the inhibition percentage was determined (Cuendet et al., 1997; Rufino et al., 2007).
Statistical analysis
All assays were performed in triplicate. Then, statistical analysis was performed using ANOVA test (P<0.05) (Welch, 1951) for independent variables, using Origin 8.0 program.

Obtaining of watermelon pulp
In general, using a watermelon unit (13.87 kg), it was possible to obtain 2.11 kg of pulp, reaching a yield of 15.25%. According to Leskovar et al. (2004) and Bruton et al. (2009), watermelon pulp consists of 93.0% water, 6.4% hydrocarbonates, 0.5% proteins, 0.3% fiber and 0.2% fat. Then, the small yield is related to the higher concentration of water, which was evaporated during the pulping process.
Lycopene extraction, identification and quantification
Extract showed red color and at 472 nm, presented 0.69±0.1 of absorbance, resulting in 38 µg of lycopene/g of fruit. This was similar to results found in literature. In their study, Nizu and Rodriguez-Amaya (2003) reported 35 and 36 µg/g of lycopene in watermelon cultivate in different states of Brazil, 73 µg/g in cherry, 53 to 69 µg/g in guava, 21 to 40 µg/g in papaya and 31 to 35 µg/g in tomato. In another study, Cefali et al. (2015b) found 46 µg/g in tomato.
Lycopene containing-emulsion development and stability study
Lycopene extract was incorporated in a shiny, odorless, white O/W emulsion. Final product was developed with moisturizing compounds, but focusing in a non-greasy feel after use. This formulation was subjected to three centrifuge cycles (3,000 rpm for 15 min) and was considered stable as it did not present phase separation, even after 24 h, therefore the developed formulation was used for lycopene extract incorporation. After extract incorporation, emulsion presented shiny appearance and yellowish coloration probably due to carotenoid presence (Sies and Stahl, 1996).
The phytocosmetic was submitted to stability study. Changes in color when stored at high temperature (45°C) and light exposure were observed. Phytocosmetic presented more intense coloration due to lycopene oxidation, which occurs because of its saturated structure (Bangalore et al., 2008; Fish et al., 2002; Sies and Stahl, 1996). This behavior was not observed when stored at other conditions and thus formulations were considered stable.
In the first 50 days of analysis, the phytocosmetic presented pH value around 6.52±0.26, which is compatible with skin pH. A standard deviation value of less than 0.05 under all studied conditions was observed, demonstrating formulation stability (Anvisa, 2004). For the accelerated stability test, the stability characteristics of the formulation remained under all stress conditions.
Assessment   of   pH  and  macroscopic  characteristics was also performed in cosmetic without lycopene extract (blank formulation) and it was stable. The blank formulation presented pH value around 6.55±0.12 and pH had a standard deviation value of less than 0.05 when it was submitted to stress conditions. Therefore, it was possible to observe that the developed formulation was stable and lycopene extract did not significantly interfered in the stability parameters of formulation.
Lycopene concentration was also evaluated during stability study by spectroscopy. The absorbance values (around 0.015) had a deviation value of less than 0.05 during stability study (90 days) (Figure 2) and then, the formulation was considered a stable formulation to be used as an anti-aging product.
In vitro antioxidant activity of extract and phytocosmetic
According to Giacomoni (2007), cosmetic product containing antioxidants actives are commonly used to anti-aging combat and the use of vegetable compounds such as carotenoids are widely studied due to its antioxidant activity in many systems (Lademann et al., 2011). Therefore, lycopene extract and lycopene containing-formulation had their antioxidant activity evaluated using in vitro DPPH method. DPPH is a free radical and presents purple color when soluble in ethanol. In contact to antioxidant substances, DPPH is reduced to diphenyl-picrylhydrazyl, changing to a yellowish color, and decreasing its absorbance (Rufino  et  al.,  2007).  All the extract containing lycopene solutions used (20, 40, 60, 80, 85, 90, 95 and 100%) presented translucent aspect and color change, macroscopically observed.
From 80 to 100%, the samples presented yellow color, proving antioxidant activity of the extract. With spectroscopy absorbance, the inhibition percentage was calculated and presented in Figure 3. Fifty percent DPPH inhibition was achieved when using lycopene extracts concentration above 80% (v/v). The formulation also had its in vitro antioxidant activity and presented inhibition percentage equal to 30.50%, evidenced by a slight color change in the solution and an absorbance decrease (Shahzad et al., 2014). Although the formulation showed small inhibition percentage, once it contained only 5.0% of extract, it can be considered a promising anti-aging product because, according to Cefali et al. (2015a), lycopene showed an ability to be retained in epidermis when it’s in vitro permeation was tested, and may reach a sufficient concentration to inhibit or avoid the action of free radicals. 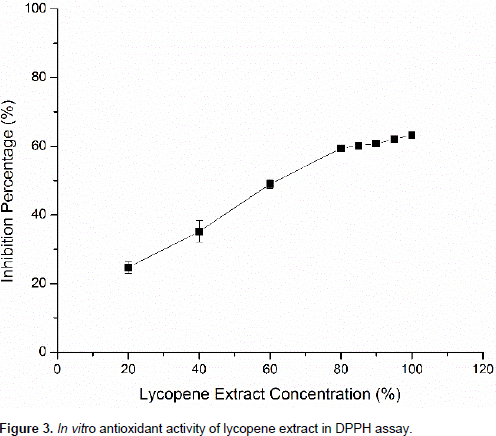 The present study demonstrated that watermelon pulp contains lycopene, and this fruit can be considered a source of antioxidant component to be used in cosmetic formulation for skin aging combat. The developed formulation was stable when away from  light  in  opaque packaging, avoiding oxidative degradation of carotenoid and browning of product.

The authors are grateful to the Brazilian funding agencies FAPESP (nº 2015/25533-7), CAPES and CNPq for financially supporting this study.