Toxicological studies were carried out to investigate the effect of consumption of Zanthoxylum zanthoxyloides root bark widely used in traditional medical practices and as protectant of stored cereal products in Nigeria, using albino rats. Serum, kidney and liver were tested for oxidation stress and tissue damage markers; aspartate amino transferase (AST), alanine amino transferase (ALT), urea, bilirubin and creatinine contents, and Kidney and liver glutathione peroxidase (GPX), glutathione transferase (GST), non-protein sulphadryl (NP-SH), thiobarbituric acid reactive substances (TBARS), total sulphadryl (T-SH) and superoxide dismutase (SOD). These tests were carried out using commercially available kits. Results obtained for all doses (1, 5 and 10%) of the tested parameters did not significantly vary with control (p>0.05), indicating normal liver and kidney function (even in the face of variation in liver GPX and SOD. This study has proven that the plant is safe for human consumption at the rates or dosages tested.

Any plant with proven medicinal or pesticidal use must also be investigated for its toxicological effects, so that its direct or  indirect  consumption  does  not  cause adverse side effect in the consumer. It is against this background that medicinal and pesticidal plants in recent times have become subject of toxicological studies (Sathya et al. , 2012; Adeyemo-Salami and Makinde, 2013;  Adebiyi and Abatan, 2013; Ileke et al., 2014; Nwosu et al., 2017; Alelign et al., 2020). The widespread use of Z. zanthoxyloides in ethno-medicine and crop protection with acclaimed successes without equal interest in direct toxicological effect of its consumption by multitude of Nigerians is responsible for our current interest in the plant and this study.

Root bark of Z. zanthoxyloides was obtained from Bida, Nigeria (latitude 9.6° north and longitude 6.1° east) in June 2018 and was dully identified in National Institute of Pharmaceutical Research and Development (NIPRD) Abuja with voucher number NIPRD/H/7101. The plant was dried under laboratory conditions: ambient temperature of 34±6°C and relative humidity of 41±5% and was grounded into fine powder for use as part of the feed. Adult female albino rats were obtained from Biochemistry Department of Federal University of Technology, Akure, Nigeria, with average weight between 150-160 g. They were acclimatized for two weeks prior to commencement of the experiment at ambient temperature of 27°C and relative humidity of 70% and diurnal cycle of 12 h.

Group I: Conventional feed plus 1% Z.  zanthoxyloides for 30 days

Group IV: Control group was given conventional feed only for 30 days.

At the end of the 30 day experimental period 5ml blood was collected from each rat and was centrifuged to obtain serum for biochemical assay of liver and kidney function. Thereafter the animals were dissected to harvest the liver and kidney. These tissues were rinsed in normal saline solution (1:3 W/V) and then homogenised in sodium phosphate buffer (pH 6.9). The homogenate was then centrifuged to obtain clear supernatants for biochemical assays of the kidney and liver (Nwosu et al., 2017).

Effect of plant on serum indices 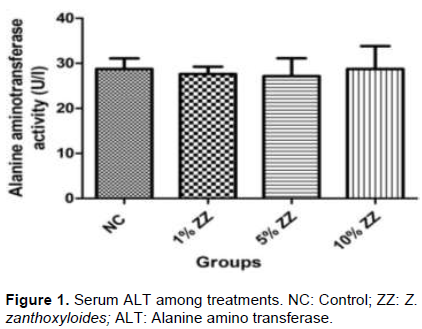 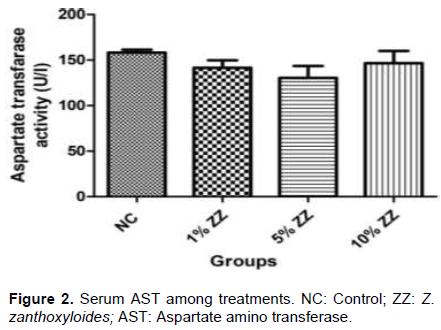 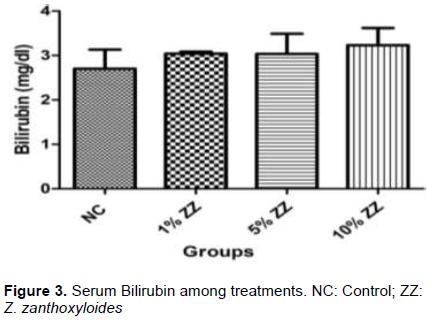 Effect of plant on kidney indices

The results of biochemical assay of the kidney GPX, GST, NP-SH, T-SH and TBARS are shown in Figures 6 to 10 respectively. There was no significant difference between all the three treatments and the control in each of the enzyme activity. 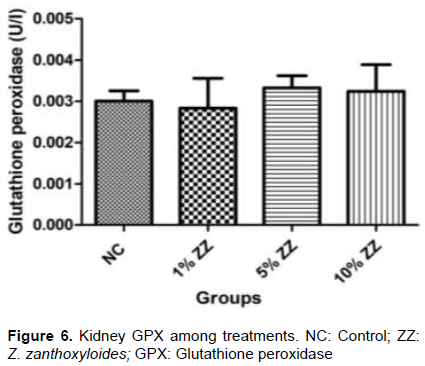 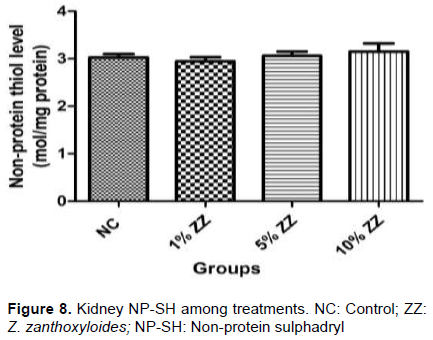 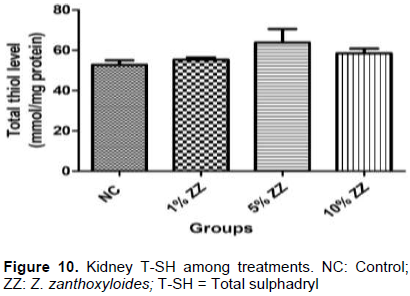 Effect of plant on liver indices 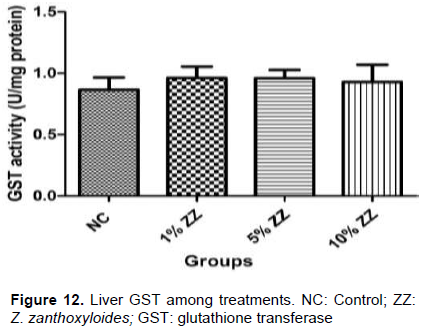 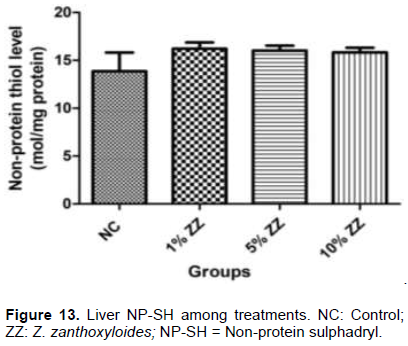 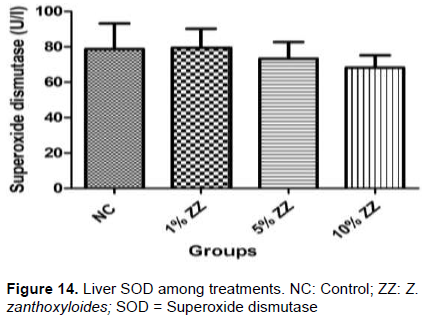 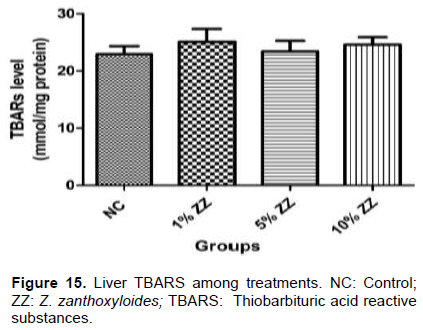 Biochemical indices provide much needed parameters for determining the level of damage or effect of foreign compounds (plant materials) on the blood and tissues of living animals (Odeyemi, 2008). It has been established that there is a relationship between serum biochemical indices, and liver  and  kidney  functions  of  experimental  animals (albino rats) (Adebiyi and Obatan, 2013; Ileke et al., 2014; Ojuwundu et al., 2014; Nwosu et al., 2017).

This study has shown that administration of Z. zanthoxyloides crude powder to feed each of these test animals at different doses did not change the ALT, AST, bilirubin, creatinine and urea level of their serum indicating the plant did not induce changes in the activities of serum enzymes, protein synthesis and deamination when compared to control. This is similar to findings of Nwosu et al (2017) on the effect of Dennettia tripetala seed powder on serum indices in albino rats and Sathya et al. (2012) using extract of Acalypha indica. Higher values of these indices in the serum will have indicated severe toxicity; damage to tissues and cell membrane in the liver or kidney leading to release of the enzymes into the serum, hence their use as markers for toxicity (Yakubu et al., 2007; Odeyemi, 2008; Ileke et al., 2014; Nwosu et al., 2017). ALT and AST are liver enzymes responsible for conversion of proteins and amino acids into energy for the liver cells (McGill, 2016).

All the indices measured for Kidney function showed no significant difference (p>0.05) which indicated that the kidney was also not affected by the different doses of plant administered. Under liver function, GST, NP-SH, TBAR and T-SH levels showed no significant difference at all doses, indicating normal liver function. Earlier researchers recorded severe damage to vital organs (kidney, liver, etc.) on application of plant extracts (Adeyemo-Salami and Makinde, 2013; Adebiyi and Abatan, 2013 and Alelign et al., 2020). However liver GPX and SOD varied significantly with doses, these differences may be due to increased oxidative stress on the liver and the response of antioxidant enzyme complex to cope with the stress (Li et al., 2005). The dosages used in this study confirms the findings of Zahoui et al. (2010) that revealed median lethal concentration (LC50) value for Fagara zanthoxyloides was found to be between 0.5 - 5.0 g/kg indicating overdose of the plant is non-fatal but victims suffer from gastrointestinal disorders when taken in excess (Anokbonggo et al., 1990). Chaaib et al. (2003), Queiroz et al. (2006) and Adekunle et al. (2012) reported increasing antioxidant ability of Z. zanthoxyloides with increasing dosage by scavenging DPPH radicals and chelating iron; this is attributed to the presence of phenolic acids such as chlorogenic and caffeic acids and flavonoid compounds such as quercetin, rutin and kaempferol, confirming the non-toxicity of the plant asserted by this study. In addition Ulrichova et al. (1983) reported that the plant also displays acetylcholinesterase inhibitory activity. The ability of Z. zanthoxyloides to scavenge free oxygen radicals or reactive oxygen species (ROS) is responsible for nontoxicity of the plant applied at all dosages in this work because the plants either do not induce production of ROS in the test animals (which will lead to toxicity) or remove the ROS as soon as they are produced.

Z. zanthoxyloides did not show toxicity in the animals under investigation as seen in all the indices under study and had earlier been proven to have antioxidant properties. This underlines its historical use in ethno-medicine. However, purification and formulation of its active components into drugs and pesticide should be the focus of new research.