Systemic bacterial infections affect almost all part of the human body systems leading to infections such as urinary tract infections, septicemia, meningitis, pneumonia, peritonitis and gastritis. Carbapenems have been used as drug of choice in the treatment of systemic infections. Studies have indicated that Enterobacteriaceae are producing enzymes such as carbapenemases, which inactivate carbapenems.  There  is  limited  treatment  option  for  systemic  infections  caused  by  carbapenem- resistant Enterobacteriaceae. Systemic infections keep increasing; hence, the determination of the effective treatment options of carbapenem-resistant Enterobacteriaceae is important for quality healthcare delivery. In this laboratory studies, agar well diffusion and well microplate dilution of the ethanolic extract of the guava leaves was used to determine the effectiveness of Psidium guajava on carbapenem-resistant K. pneumoniae. The antimicrobial compounds responsible for the antibacterial activity were screened using standard methods. The active zones of inhibition were observed in  P. guajava leaves extract concentrations of 50, 100 and 200 mg/ml. The minimum inhibition concentration and minimum bactericidal concentration of ethanolic extract of guava leaves was 6.25 mg/ml indicating significant antibacterial activity against the carbapenem-resistant K. pneumoniae. The antibacterial activity of the leaves extract may be attributed to the presence of flavonoids and other antimicrobial phytochemicals in the guava leaves extract. The outcome of this baseline laboratory studies indicates the possibility of producing efficacious antibiotic to treat carbapenems-resistant systemic infections. The determination of the toxicological effect of the isolated active antimicrobial compounds of guava leaves extract is worth following in subsequent studies.

Multi-drug resistance of bacterial infections is a public health menace in the 21st century. This is aggravated by the   continuous  misuse  of   antibiotics   in  humans  and animals. Systemic bacterial infections cause urinary tract infections, meningitis, septicemia, pneumonia, peritonitis and  gastritis.  Community and hospital acquired systemic infections are mostly caused by Enterobacteriaceae, spread easily among humans though contaminated water and food. Plasmids and transposons are mostly responsible for the transfer of the multi-drug resistant genetic material among the Enterobacteriaceae (Nordmann et al., 2011).

Until recently carbapenems such as meropenem, ertapenem, imipenem and doripenem were the drug of choice for the successful treatment of most systemic infections. Carbapenems are also valuable in the treatment of extended-spectrum beta-lactamases (ESBLs) producing bacteria (Pitout and Laupland, 2008) (Vardakas et al., 2012). It has been established in Accra that ESBL producers were increasingly becoming a public health nuisance and carbapenems were the best treatment option for the ESBL infections (Hackman et al., 2013).

The emergence of carbapenemase-resistant Enterobacteriaeae (CRE) is a threat to the effective treatment of systemic infections. The carbapenemese enzymes produced by Enterobacteriaceae are capable of inactivating carbapenems. Some of the emerging CRE responsible for systemic infections include Klebsiella pneumoniae, Escherichia coli, Providencia rettgeri, Proteus mirabili, Pantoea species, Citrobacter koseri and Acinetobacter baumanii (Hackman et al., 2017).

Several carbapenemeses have been characterized (Queenan and Bush, 2007) after Nordmann reported carbapenemase-producing Enterobacteriaceae in 1993 (Naas and Nordmann, 1994). There is limited antibiotic treatment option for these multidrug-resistant systemic infections (Falagas et al., 2013). Natural products remain the important source of therapeutic agents for systemic infections and other conditions (Korosecchviz et al., 1992). The phytochemical constituents and pharmacological potential of a significant number of higher plants remain unknown (Saraswathy et al., 2011). This calls for consistent and deliberate studies of plant species to discover alternative treatment options.

Psidium guajava (guava) is known for its fruit and medicinal purposes in the tropical countries. Guava is indicated for the treatment of gastroenteritis, caries, diarrhea, dysentery, diabetes, hypertension and pain relief (Naseer et al., 2018). It contains high content of organic and inorganic compounds such as antimicrobials, antioxidants, polyphenols and anti-inflammatory compounds (Naseer et al., 2018).

This study was conducted at the Centre for Plant Medicine Research situated at Mampong-Akuapem in the Eastern Region of Ghana.

Thousand grams of the plant leaves were collected and identified at the herbarium at the Centre for Plant Medicine Research (CPMR). The sampling was based on the assumption that the plant is healthy and uninfected. The plant parts were cut into pieces, air dried at 26 ± 2°C for ten days and milled into coarse powder with the aid of an electric blender.

Three hundred grams of the powdered guava leaves was soaked in 2 L of  96% absolute ethanol for 72 h with occasional stirring and was filtered through Wathman’s No.1 filter paper. Rotary evaporator was used to concentrate the filtrate and was freeze-dried using the freeze drying machine at a temperature and reduced pressure of 35°C and 100-80 hPa respectively. The dried extract was stored under refrigeration condition (4°C) until needed.

Reconstitution of serial concentrations of the crude extract

Eight hundred milligrams of the dried ethanolic extracts were disolved in 4 ml of 5% v/v dimethyl sulphoxide (DMSO) to prepare 200 mg/ml concentration of the leaves extract. The conventional two folds dilution technique was used to prepare the remaining concentrations of 100, 50, 25, and 12.5 mg/ml.

Preparation of Muellar Hinton Agar (MHA) as a culture media

The Muellar Hinton agar was prepared according to the manufacturer’s instruction. Thirty eight grams (38 g) of the powder was suspended in 1000 ml of demineralized water and heated to boil with agitation to completely dissolve the powder. The autoclave was used to sterilise the culture media at 121°C for 15 min.

The susceptibility of the isolates to carbapenems (ertapenem, imipenem, meropenem) was determined using Kirby-Bauer method of antibiotic susceptibility test. Etest system (bioMérieux, France) was also used to determine the minimum inhibition concentration (MIC) of the carbapenems. The therapeutic significance of the zones of inhibition and MICs of the carbapenems were based on the Clinical and Laboratory Standards Institute (CLSI)  breakpoints.

The carbapenem-resistant Enterobacteriaeae used in the study was K. pneumoniae.

In order to obtain pure culture of K. pneumoniae, the isolates were sub-cultured on Mueller Hinton agar plate and incubated for 24 h. Using an inoculation needle, at least four colonies from the pure culture were transferred into sterile peptone water and adjusted to turbidity equivalent to 0.5 McFarland Standard.

The agar-well diffusion method was used to assess the antibacterial activity of the guava leaves extracts. A 3 ml inoculum with 0.5 McFarland was uniformly spread on the Muellar Hinton agar plate using the glass spreader. Cork borer was used to create wells (6mm diameter) in the plate. Twenty microlitres (20 µl) of the guava leaves extract concentrations (200, 100, 50, 25 and 12.5 mg/ml) were transferred into the wells. Amikacin (30 µg/ml) and colistin (10 µg/ml) disks were used as positive controls and 5% v/v DMSO and sterile distilled water (SDW) were used as the negative controls. The guava leaves extract and controls were allowed to diffuse at room temperature for 30 min and the plates were then incubated at 37°C for 24 h. The experiments were carried out in triplicates. After incubation, the diameter zone of inhibition (DZI) was measured and recorded in millimeters. According to Junior and Zanil (2000), DZI < 7mm was considered inactive; 7-10 mm partially active; 11-16 active and > 16 very active.

Hundred microlitres (100 µl) of ethanolic extract of the guava leaves were added to 100 µl of 5% DMSO in the first well of the 96-well microplate. Hundred microlitres (100 µl) of the mixture was transferred to the next well in the column. The two-fold serial dilution was continued from 101 to 1010 with the aid of a micropipette. The final volume in each well was 100 μl. Amikacin (30 µg/ml) and colistin (10 µg/ml) as positive controls were also serially diluted in different columns of the microplate. Five microlitres of 0.5 McFarland microbial suspension was dispensed into the wells and incubated at 37°C for 24 h.

Forty microlitres of 0.2 mg/ml INT (p-Iodonitrotetrazolium violet) dissolved in sterile distilled water was added to each of the wells after incubation. After additional 30 to 120 min of incubation, the microplates were examined to determine bacterial growth. A red colour of INT reduced to the formazan indicated bacterial growth. The MIC was determined based on the lowest concentration at which a decrease in the red colour is apparent compared to the next dilution.

The    phytochemical    constituents   in   the   guava   extracts were screened using standards methods as described by Fong et al. (1977) and Ciulei (1982). This was used to determine the presence of saponins, reducing compounds, polyuronides, phenolic compounds, alkaloids, triterpenes, phytosterols, flavonoids and anthracenosides.

The zones of inhibition of the various concentrations of the ethanolic extract of guava leaves are shown in Table 1.

The phytochemical constituents of the guava leaves extract were saponins, phenolic compounds, reducing sugars, polyuronoids and flavonoids as shown in Table 3. Previous work by Arima and Danno (2002) isolated the antimicrobial compounds in guava and elucidated their chemical structure. 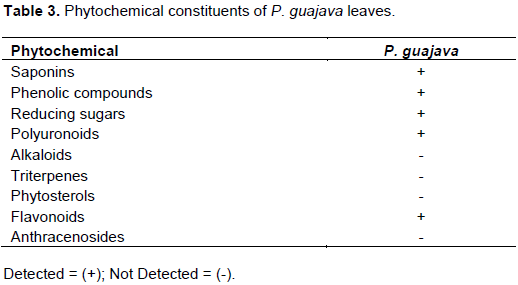 The varied concentrations (12.5- 200 mg/ml) of the guava leaves extracts, which were used against the CRE strain employing the agar diffusion method, revealed significant antibacterial activity against the test organism as shown in Table 1. Furthermore, ethanolic extracts of guava leaves had MIC and MBC of 6.25 mg/ml against CREs.

This may be because guava leaves possess phytochemicals such as saponins, phenolic compounds, reducing sugars, polyuronoids and flavonoids. Flavonoids have antibacterial effect. According to Arima and Danno (2002), four flavonoid compounds: morin-3-O-alpha-L-lyxopyranoside, morin-3-O-alpha-L-arabopyranoside, guaijavarin and quercetin were isolated from guava leaves extract. It could be that the plant extract used in this study may contain these four flavonoids as shown in Table 1. It is plausible that other phytochemicals that were not determined in this study may also contribute to the antimicrobial efficacy of the guava leaves.

The activity of the positive controls (amikacin and colistin) used in this study correspond with the results of Hackman et al. (2017) although amikacin (30 µg/ml) used in this study shows a higher diameter zone of inhibition. According  to  Junior  and  Zanil  (2000), diameter zone of inhibition of 11-16 is considered active and >16 is considered very active. From the results, guava leaves extract concentrations of 50, 100 and 200 mg/ml indicated active diameter zone of inhibition. From Table 2, P. guajava had an MIC of 6.25 mg/ml, MBC of 6.25 mg/ml with the percentage inhibition index being 13.33. This showed that the appropriate concentration of the ethanolic extract of guava leaves is efficacious  against  the  growth of the carbapenem-resistant K. pneumoniae.

The hypothesis for this study proved positive since the plant under study showed activity against CREs. Ethanolic extracts of guava leaves have been proved to be efficacious against multi-drug resistant  K. pneumoniae,  which  is a major cause of systemic infections. Phytochemical screening of the leaves showed that it possesses flavonoids, which is responsible for the antibacterial efficacy of the guava leaves extracts. This offers hope for the development of effective antibiotics for the treatment of systemic infections caused by carbapenem-resistant Enterobacteriaceae. This requires the determination of the toxicological effect  of  the  structure  of  the active antibacterialcompounds isolated in the ethanolic leaves extracts of P. guajava.

The authors appreciate the logistical support by Centre for Research into Plant Medicine.