Cancer or tumor is the most common cause of death in both developed and developing countries. There are many methods are available to describe how cancer spread throughout the body. One method showed cancer is preliminary effect on specific part of our body and then invade to the other parts of our body very quickly and ultimately causes death of the patient (Evan, 2002; Ueda et al., 2002). So it is very necessary to identify or diagnosis of cancer at early stage otherwise if it is spread other part of the body then difficult to treat. However, there are several approaches of cancer treatments are available including surgery, radiation therapy and chemotherapy. All of these approaches are aimed to destroy  cancerous  cell  from  the  body. Each  approach possesses several side effect (Kintzios et al., 2004). That is why it is now demand of the present era to discover drug with fewer side effect. There are many chemotherapeutic agents is being invented to treat various cancer. They utilize sometimes in individual form or in conjunction with other drugs in the form of chemotherapy. But most of these drugs are synthetic and shown numerous side effects. We know that plant is always the safer source for treating any kind of disease. By considering this universal truth our present study was undertaken to discover drug from natural source with fewer side effect for treating different types of cancer.

Again, Antibiotic resistance has become a great concern of treating infectious disease globally which offers great challenges for clinicians and pharmaceutical industry (Bauer et al., 2003). Many of our currently used antibiotics have become less active against a wide range of pathogen due to emergences of drug resistance. On the other hand, newly discovered drug possess many unwanted side effect. So the analysis of medicinal plants to explore antimicrobial agents will be a fruitful task in generating new way of treatment (Shahidi, 2004; Runyoro et al., 2006). That is why our present study was undertaken.

Our present research was conducting on Crinum latifolium, which is an herb belonging to the family Amaryllidaceae that arises from an underground bulb. It is locally known as sukhdarsan. Phytochemical screening of leaves reveals the presence of a wide variety of compounds such as alkaloids, phenolic compounds, tannins, flavonoids, terpenoids, amino acids, steroid saponins, and antioxidants. Traditionally Bulbs are used as a rubefacient for rheumatism. Juices of the leaves are used for earaches. Crushed and toasted bulbs are used for piles and abscesses to hasten suppuration (Dewan et al., 2013). The purpose of our current study is to analyze antimicrobial, cytotoxic and membrane stabilizing potentials of the plant methanolic extract.

Collection and identification of plant material

The fresh leaves of C. latifolium were collected from Noakhali, a coastal region of Bangladesh on 26th July, 2012 and were taxonomically identified by taxonomist and botanist of Bangladesh National Herbarium, Mirpur, and Dhaka. Their given Accession number was -37751.

To determine the antimicrobial potential of this plant, antimicrobial screening was performed by using disk diffusion method with slight modification for convenience. Many of the recent work was done by this method we used here (Bauer et al., 1966; Prabhu et al., 2011; Pratibha et al., 2012).

Gram positive (Staphylococcus aureus) and Gram negative (Escherichia coli, Salmonella typhi, Pseudomonas aeruginosa) bacteria were used as a test organisms for antimicrobial activity. The strains of these organisms were collected from the Department of Microbiology, Noakhali Science and Technology University, Sonapur-3814, Noakhali, Bangladesh and are sub-cultered in nutrient broth and nutrient agar culture media.

To prepare fresh cultures and to test the sensitivity of the materials against micro-organism we used Nutrient agar medium (DIFCO). For preparing the media specified amount of nutrient agar was taken in a conical flask and distilled water was added to it to make the required volume of 1000 ml. For perfect dissolution the contents were heated in a water bath with continuous steering and the pH (at 25°C) was maintained at 7.2-7.6 using NaOH or HCl. The tip of the flask was mounted with a flag of cotton and aluminum foil and subjected to sterilization by autoclaving machine at a pressure of 15 lbs/sq inch, for 25 min at 125ºC temperature. About 10 ml and  5 ml of the medium was then transferred into screw cap test tubes to prepare plates and slants respectively and lower the temperature to 45-50°C. The slants were used for making fresh culture of microorganisms that were in turn used for sensitivity study.

Application of discs, diffusion and incubation

Freshly prepared sample discs and commercially available standard antibiotic disc were transferred to each petri dish. The plates were then inverted and kept in a refrigerator for about 24 h at 4°C to allow sufficient diffusion of the materials from the discs to the surrounding area of the medium. The dishes were then incubated at 37°C for 24 h to allow optimal growth of microorganism.

Measurement of zone of inhibition

Antibacterial activity of test sample was measured by calculating zone of inhibition (Scalbert, 1991), which can be expressed in millimeter or centimeter unit by using suitable antibiotic zone scale. Different antibiotics discs (Ampicillin, Imipenem, Penicillin and Cefixitime) and sterile filter paper disc with respective solvent (methanol) of 25 µl were used as positive and negative control respectively. If the test sample possesses any antimicrobial activity, it will reduce the growth of the microorganisms and a clear, distinct zone of inhibition will be appeared surrounding the medium.

The measurement of toxicity plays a vital role in drug discovery and is a useful tool in biological, especially ecological investigations (Opler et al., 2002). It also serves as a tool for screening plant extracts of possible medicinal value. In this study, we used simple brine shrimp bioassay test of Meyer with slight modification by using Artimia salina as test organism, which was collected from a pet shop (Meyer et al., 1982).

Sea water was prepared by dissolving 38 g sea salt (pure NaCl) in one liter of distilled water, which is then filtered to get clear solution of 3.8% concentration (Krishnaraju et al., 2006). In a suitable plastic or glass vessel sea water was taken and shrimp eggs were added to one side of the vessel and allowed to hatch for 24 h till the mature nauplii were found. Continuous oxygen and light supply were provided to support the hatching process.

All the test samples were taken in vials and dissolved in 100 µl of pure dimethyl sulfoxide (DMSO) to get stock solutions. Then 50 µl of solution was taken in the first test tube containing 5 ml of simulated seawater and 10 shrimp nauplii. Thus, final concentration of the prepared solution in the first test tube was 400 µg/ml. Then a series of solutions of varying concentrations were prepared from the stock solution by serial dilution method. In every case, 50 µl samples were added to test tube and fresh 50 µl DMSO was added to vial.

100 µl of DMSO was added to each of three pre-marked glass vials containing 5 ml of simulated sea water and 10 shrimp nauplii to use as negative control groups.

Here we used vincristine sulphate (VINCRIRST ®, Techno Drugs Ltd., Bangladesh) as a positive control. Measured amount of vincristine sulphate was dissolved in DMSO to get an initial concentration of 40 µg/ml from which serial dilutions were made using DMSO to get 20, 10, 5, 2.5, 1.25, 0.625, 0.3125, 0.15625 and 0.078125 µg/ml respectively. Then the positive control solutions were added to the pre-marked vials containing ten living brine shrimp nauplii in 5 ml simulated sea water to get the positive control groups (Islam et al., 2009).

After 24 h, the number of survived nauplii in each vial was counted by using magniflying glass. From this data the percent (%) of mortality of brine shrimp nauplii was calculated for each concentration.

The membrane stabilizing activity of the extractives was assessed by evaluating their ability to inhibit hypotonic solution hemolysis of human erythrocytes following the method developed by Omale et al. (2008).

All the above assays were conducted in triplicate and repeated threes for consistency of results and statistical purpose. The data were expressed as Mean±SD and analyzed by one way analysis of variance (ANOVA) followed by Dunnett ‘t’ test using SPSS software of 10 version. P<0.05 was considered statistically significant.

From the experiment, we observed that, crude methanolic extracts of C. latifolium showed slight activity against Gram positive (+ve) S. aureus bacteria. On the other hand, it showed good antibacterial properties against Gram negative (-ve) E. coli bacteria. The overview of the results is shown in Table 1.

The medicinal properties of the plants lie in a several chemical group such as tannins, flavonoids, alkaloids and phenolic compound. Many parts of the plant especially leaves possess antimicrobial properties due to presence of tannins and flavonoids (Scalbert, 1991; Chung et al., 1998). Plants also synthesize huge amount  of aromatic compound among which phenols or their oxygen-substituted derivatives are predominant (Geissman, 1963). These compounds provide protection against microbes for the plant (Cowan, 1999). This is great to see our plant extract showed to have phytochemicals responsible for anti-microbial effect (Dewan et al., 2013).

Cancer-related research is conducted all over  the world for discovering new hopes for patient suffering with cancer. These studies frequently able to originate biologically active agents from plants used and will be used for treating different carcinoma (Mukherjee et al., 2001). In addition, it is important to understand the mechanisms of anticancer agents for future application in cancer therapy (Half et al., 2009). Our present study investigated the cytotoxic activity of the methanolic extract of C. latifolium. It was found that many of the phytochemicals provide protection against cancer due to poly-phenyl antioxidant and anti-inflammatory effect. Several studies also suggest that these phytochemical provide protection against colorectal plus other types of cancer (Michaud et al., 2000; Greenberg et al., 1994; Birt et al., 2001). Our plant part also contain polyphenol so this plant was one will be one of the most trusted source for discovering anticancer drug, that was so far established through our present study as our plant methanolic extract showed remarkable cytotoxic activity.

C. latifolium methanolic extract inhibited hypotonic solution and heat induced hemolysis of erythrocyte at varying percentage that was comparable with membrane stabilizing activity shown by standard acetyl salicylic acid. As through the standard anti-inflammatory drug showed higher stabilization activity than the experimental plant methanolic extract, but our plant extract will be the existing source of anti-inflammatory activity with fewer or no side effects. The moderate membrane stabilizing activity shown by our plant methanolic extract may be due to the presence of flavonoid contents. It has been established by many experimental study that plants with flavonoids shown profound stabilizing effects on lysosomes both in vitro and in vivo laboratory condition (Middleton, 1996).

From the above  experiments  we  could  terminated  that the crude methanolic and various solvent soluble extracts of C. latifolium (leaves) showed slight to moderate cytotoxic activities. We also confreres that, it also revealed excellent antibacterial and membrane stabilizing activities (Figures 1 and 2). 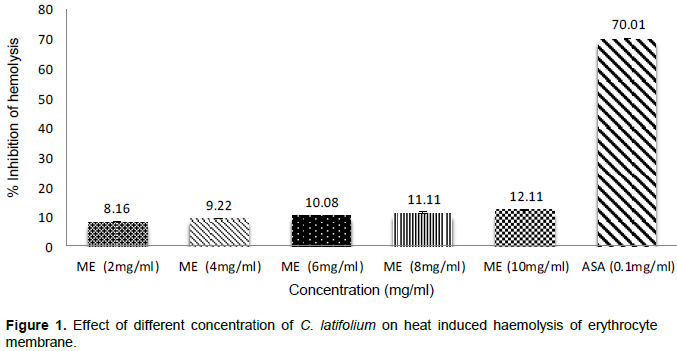 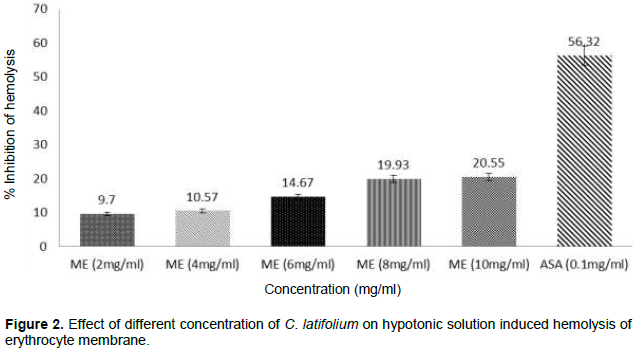