Palicourea rigida Kunth (Rubiaceae), also called “bate-caixa” or “douradão”, has been used as antihypertensive, antiulcerogenic, anti-inflammatory and analgesic by traditional communities. Pharmacological potential of the ethanol extract from P. rigida (EEPR) and two quercetin derivatives were investigated. Using the high performance liquid chromatography (HPLC) assay, EEPR was analyzed. Phenolic contents (total phenolic and flavonoids) were quantified by spectrophotometric methods. 2,2-diphenyl-1-pycrilhydrazil (DPPH), iron reducing power and β-carotene/linoleic acid bleaching tests were applied to estimate the antoxidant capacity of EEPR. Nociception (acetic acid-induced writhing, formalin and hot plate) and inflammation (carrageenan-induced paw edema and pleurisy) assays were performed. Molecular docking was used to measure the interactions’ profiles of ligands (rutin and quercetin) and cyclooxigenases (COX-1 and COX-2). HPLC analysis identified rutin and quercetin derivatives. Expressive levels of total phenolic and flavonoids and a promising antioxidant effect were measured. EEPR, rutin and quercetin reduced the abdominal contortions. EEPR was effective against both phases of formalin, while rutin and quercetin inhibited the second phase. The latency time on hot plate significantly increased after treatment with EEPR. Inflammatory parameters (paw edema, exudate volume and leukocyte infiltrate) were diminished by EEPR, rutin and quercetin. The molecular docking showed that rutin and quercetin are capable of complexing with COX-1 and COX-2 favorably through physical-chemical interactions. The results suggest that EEPR showed a relevant pharmacological potential, which may be related to action of rutin and quercetin derivatives.

In the body, the imbalance between oxidant/antioxidant in favor of the oxidation promotes the oxidative stress that causes proteins, lipids and DNA damages, as well as induces  a  variety   of   cellular   responses   through  the generation of reactive oxygen species (ROS) that may be originated from cellular metabolism or environmental sources (Nita and Grzybowski, 2016). ROS have become a concern among  researchers  because  they have been associated with a significant number of diseases involving inflammatory and painful processes that affect humans and animals. In inflammation, for example, ROS cause vascular damage which allows the permeability of macromolecules and inflammatory cells from the blood to tissue (Mittal et al., 2014). This permeability is controlled by vasoactive and chemotactic mediators, which make the inflammatory process active, including the pain (Silva, 2015). Among the mediators that regulate the events of inflammation, vasoactive amines, lipid-derived eicosanoids, cytokines, chemokines and adhesion molecules have been highlighted (Silva, 2015). On the other hand, the inflammatory pain has been treated with non-steroidal anti-inflammatory agents, but present high prevalence among adverse reactions to drugs (Derle et al., 2006). However, natural products, as flavonoids, have been investigated for their mechanisms against painful, inflammatory and oxidative processes (Agrawal, 2011; Iwalewa et al., 2007).
Palicourea is a plant genus in the family Rubiaceae and contains about 200 species (Rosa et al., 2010). Plants of this genus, as Palicourea rigida Kunth, are distributed in the Tropics of the New World, particularly in the South America’ Brazilian Cerrado region (Morel et al., 2011). P. rigida, commonly known as “douradinha”, “bate-caixa” and “douradão” and the medicinal uses as antifungal, analgesic, diuretic, hypotensive, antiulcerogenic, cicatrizing and anti-inflammatory have been made by traditional communities (Rosa et al., 2010). From the chemical view-point, triterpenes, flavonoids, iridoids, alkaloids and peptides have been identified in this medicinal plant (Rosa et al., 2010; Morel et al., 2011; Pinto et al., 2012; Soares et al., 2012). Antioxidant (Rosa et al., 2010), antibacterial and insecticide (Pinto et al., 2012) and antiproliferative (Soares et al., 2012) activities have been related to these compounds.
Additionally, rutin is a flavone glycoside widely known and its hydrolysis produces quercetin and rutinose by the action of glucosidase (Chua, 2013). Both rutin and quercetin are found in medicinal plants, and anti-inflammatory (Chua, 2013; Choi et al., 2012), anti-tumor (Ren et al., 2003), anti-asthma (Jung et al., 2007), and antioxidant (Yang et al., 2008) activities are attributed to these compounds. Beside these data, quercetin 3-O-D-glucoside, quercetin 3-O-sophoroside and isorhamnetin 3-glucoside were identified in P. rigida (Rosa et al., 2010), which can justify the biological properties of this plant.
Considering that the scientific evidences of medicinal plants are fundamental for the therapeutic use, this article was described to investigate the antioxidant, antinociceptive  and  anti-inflammatory activities of EEPR using in vitro, in vivo and in silico tools. In addition, due to the chemical characterization and phenolic and flavonoid contents of EEPR, two markers (rutin and quercetin) were evaluated in order to establish possible bioactive compounds and mechanism of action.

Chemical determination and antioxidant activity
Using specific reagents, tannins, flavonoids, coumarins, terpenoids and steroids, saponins, anthraquinones and alkaloids were detected in EEPR.
EEPR revealed total phenolic and flavonoid contents and antioxidant activity (Table 1). In this extract, the total phenolic content was of 5.78±0.05 g/100 g, while the flavonoid reached 3.95±0.02 g/100 g. EEPR produced EC50 equal to 65.37±0.16 μg/mL (DPPH) and 697.36±2.48 μg/mL (reducing power). Using 𝛽-carotene bleaching assay, the  inhibition  of  lipid  peroxidation of  EEPR  was 64.46%. As expected, rutin and quercetin showed antioxidant effect in these methods. In addition, quercetin was more active than rutin (a glycosylated flavonoid) in lipid peroxidation, since such assay is related to the oxidative stress in biological membranes.

High pressure liquid chromatography (HPLC) analysis
Considering the UV spectrum and the retention time of the main peaks, rutin (peak 13, tR = 30.72 min) was identified (Figure 1). However, rutin content was not quantified. The peak 12 represented a quercetin derivative. Although gallic acid, kaempferol, luteolin, luteolin 7-O-β-D-glucoside, apigenin and apigenin 7-O-β-D-glucoside had been reported in other species of Palicourea, using the conditions described above, these markers were not detected in EEPR. It is possible that flavonoids, together with other compounds, have a synergistic action that may justify the pharmacological effects of P. rigida. 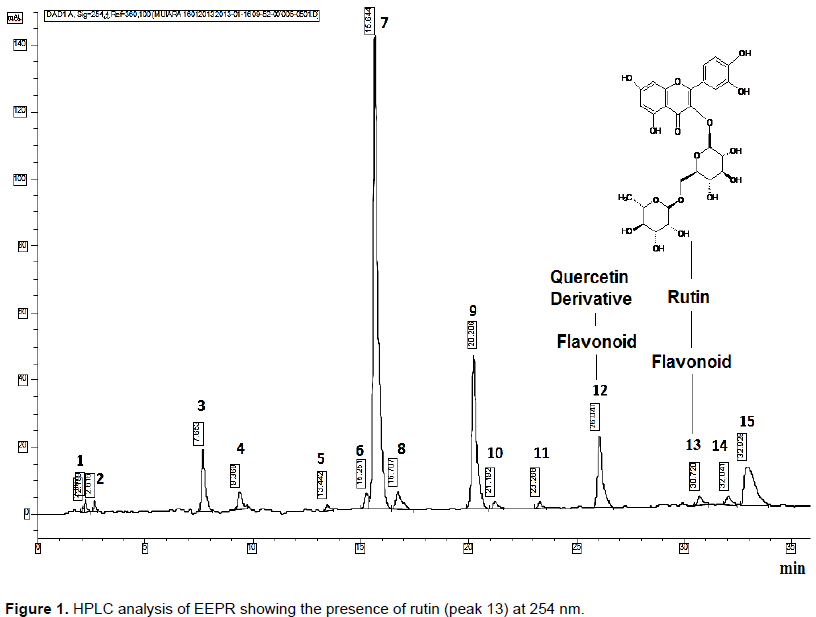 Assessment of the acute toxicity
EEPR revealed no toxicity to treated animals, since produced LD50 up to 3000 mg/kg. After 48 h of treatment, the animals showed no signs or symptoms of toxicity. The LD50 value was important in defining the pharmacologic doses.
Effect on acetic acid-induced chemical nociception in mice
When compared to the control group, 100, 200 and 400 mg/kg of EEPR significantly (p < 0.05) reduced the writhes in 32.92, 33.62 and 62.26%, respectively. Rutin (24.36%) and quercetin (25.39%) also diminished the abdominal contortions (p < 0.05). Indomethacin (75.64%) and acetylsalicylic acid (69.22%) proved to be efficient as analgesic agents, since were able to inhibit the abdominal contortions (Figure 2). 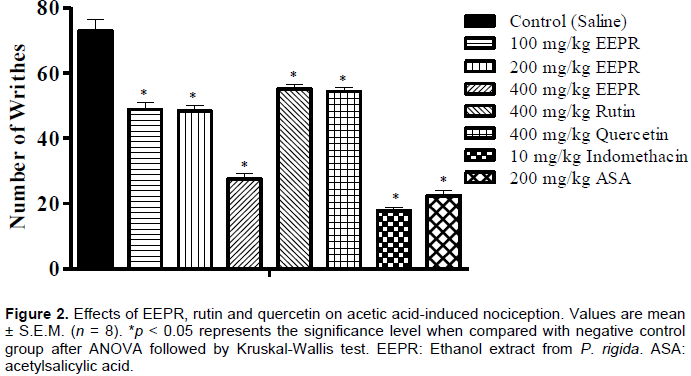 Effect on formalin-induced chemical nociception in mice
The duration of paw licking for the control group was 74.25 ± 2.60 s (first phase) and 86.75 ± 2.40 s (second phase). EEPR (200 and 400 mg/kg) and morphine (5 mg/kg) significantly reduced the paw licking time in the nociceptive phase (Figure 3). In this phase, rutin and quercetin were not actives. The licking time was reduced after treatment with EEPR (100 to 400 mg/kg), rutin and quercetin in the second phase (p < 0.05). Even by different mechanism, indomethacin (cyclooxygenase inhibitor) and morphine (opioid agonist) were highly effective in decreasing the late phase. 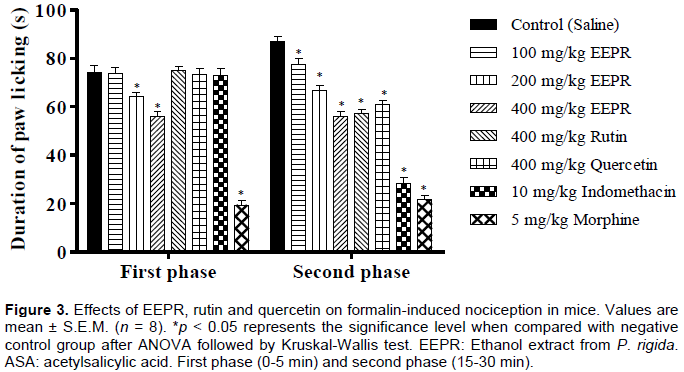 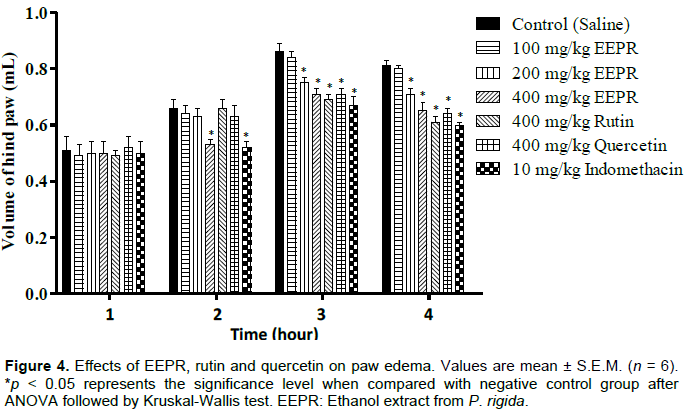 Molecular interaction profiles by docking
The molecular docking study showed that the ligands (rutin and quercetin) are capable of complexing with cyclooxygenase-1 (rutin = -9.1 Kcalmol-1; quercetin = -9.6 Kcalmol-1) and cyclooxygenase-2 (rutin = -9.8 Kcalmol-1; quercetin = -8.2 Kcalmol-1) more favorably than acetylsalicylic acid (-7.0 and -7.3 kcalmol-1 to COX-1 and COX-2, respectively) and indomethacin (-6.3 and -6.8 kcalmol-1 to COX-1 and COX-2, respectively) (Table 4). These data indicated that rutin and quercetin have higher affinity for the site of action of these enzymes than the reference compounds. In addition, van der Waals, dipole-dipole and hydrogen bonding interactions were recognized by the inflammatory enzymes (COX-1 and COX-2) (Figures 5 and 6). 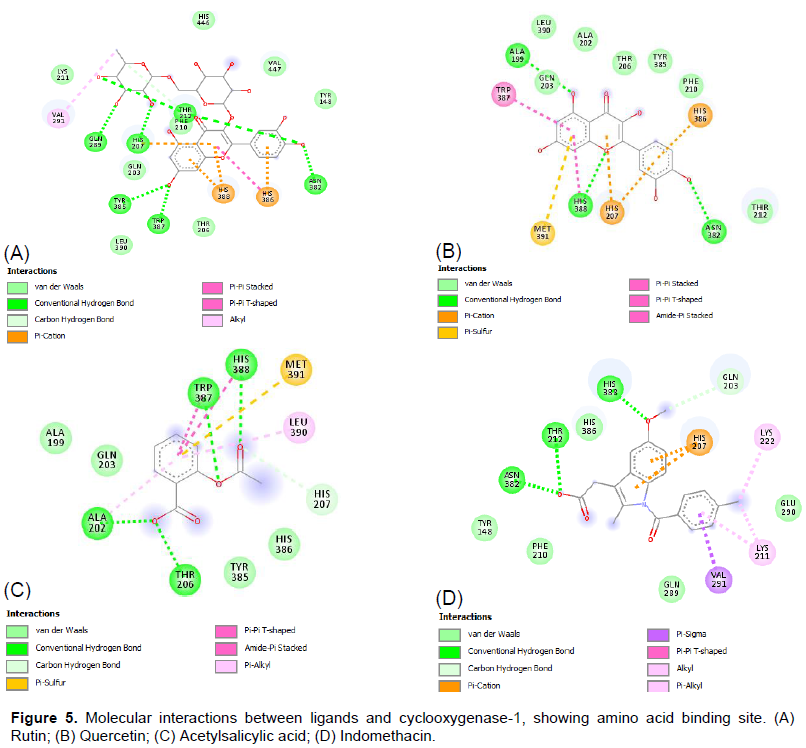 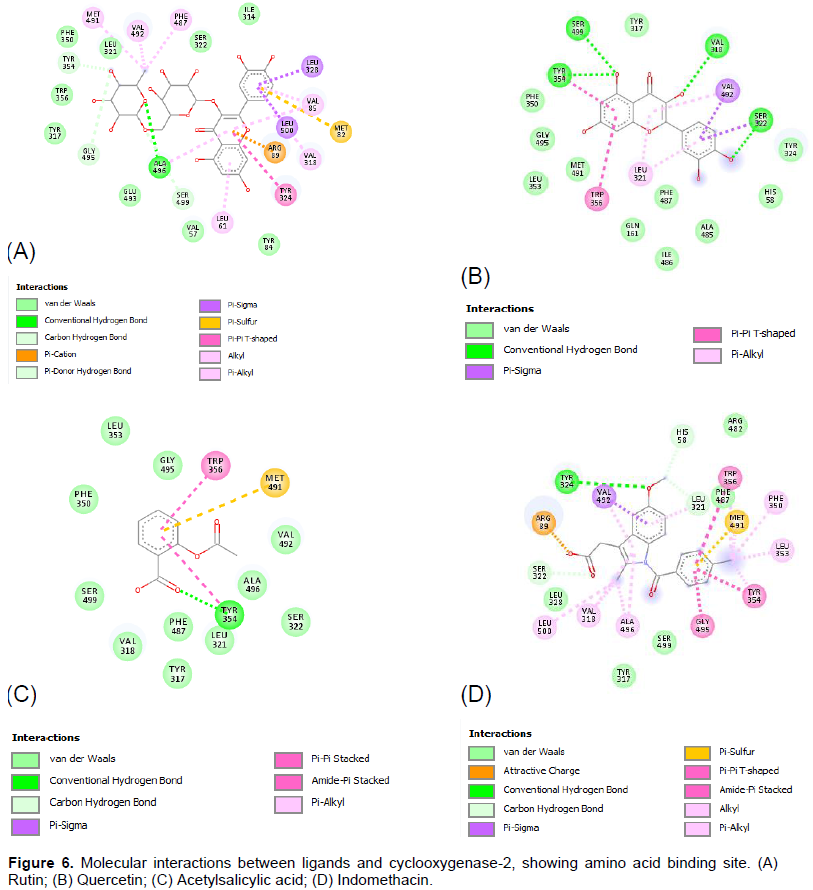