Vaccium meridionale Swartz, commonly Andean Berry, has a high content of several phytochemicals, such as anthocyanins, phenolic acids, and other flavonoids. However, in spite of its antioxidant capacity, there is little information about its anticarcinogenic properties. This study evaluated the antiproliferative and pro-apoptotic activity of Andean Berry Juice (ABJ) on human colon adenocarcinoma SW480 cells. The antiproliferative activity of ABJ was evaluated on SW480 cells using the Sulphorodamine B assay.The effect on cell viability, cytotoxicity and activation of caspase-3 was analyzed using The ApoTox-Glo™ Triplex Assay. Specific apoptotic biomarkers cleaved PARP, total Bcl-2-associated death promote (BAD), phosphorylated BAD, total p53, and phosphorylated p53 were also analyzed. To determine the intracellular redox-state, the Glutathione Assay Kit and 2′-7′-Dichlorodihydrofluorescein diacetate (DCFH-DA) were used, respectively. The antiproliferative  assay showed  a IC50 value of  8% v/v ABJ, the caspase 3 activity was increased in time-dependent manner in SW480  treated cells, the proapoptotic proteins (cleaved caspase 3, cleaved PARP, P53 and  total BAD) were increased by 1.6 to 2.0 fold. In addition, the ABJ-treated SW480 cells increased significantly the production of intracellular reactive oxygen species (ROS), parallel with reduction in the intracellular content of glutathione (GSH) and consequently a decrease of GSH/ oxidized glutathione (GSSG) ratio. In conclusion, the ABJ was able to inhibit SW480 cells proliferation involving apoptotic mechanisms through the perturbation of intracellular oxidative state.

According to the International Agency for Research on Cancer (IARC), approximately 663.904 new cases of Colorrectal Cancer (CRC) were  diagnosed  and  320.397 people died worldwide during 2008 (Boyle and Levin, 2008). The countries with the highest incidence rates include Australia, New Zealand, Canada, USA and  some parts of Europe (Forman et al., 2014). According to epidemiological findings of Doll and Peto (1981), 35% of all deaths from CRC are associated with nutritional factors, either by the presence of dietary carcinogens, or by the absence in the diet of foods with preventive properties. The World Cancer Research Fund (WCRF) and the American Institute for Cancer Research (AICR) concluded that, the dietary factors associated with the increase of risk for CRC are:  (i) the consumption of red and processed meat, (2) low intake of foods containing fiber, milk and calcium, and (3) high intake of alcohol supported with convincing and probable evidence (Boyle and Levin, 2008).
At the same time, the IARC reported that eating foods containing fiber such as fruits, whole grain, cereals, legumes and vegetables in three servings/days, reduced the risk of CRC by 21.5% (Forman et al., 2014). In addition, it has promoted the consumption of certain types of fruits and vegetables whose antioxidant, antigenotoxic, anti-inflammatory and antiproliferative properties are able to prevent initiation of colorectal carcinogenesis, or retard this process towards to promotion stages.
There is strong evidence that the antioxidants present in fruits and vegetables protect lipids, proteins and nucleic acids against the oxidative damage initiated by free radicals (Ferguson et al., 2004). Fruit extracts of Vaccinium species including slowbush blueberry, bilberry, cranberry, and lingonberry inhibit multiple stages of carcinogenesis and stimulate the apoptosis of cancer cells (Kraft et al., 2005; Ferguson et al., 2016; Safrin et al., 2016). These effects may be partly attributable to polyphenolic compounds such as flavonols, anthocyanins, and proanthocyanidins contained in this genus.
Vaccinium meridionale Swartz (Andean Berry) is a Colombian native plant that belongs to the Ericacea family. This fruit has been considered as a potential functional food because of its high content of phenolic compounds and anthocyanins that attribute an antioxidant capacity similar to or higher than the values reported for other species of Vaccinium (Gaviria et al., 2009; Gaviria et al., 2012). The total antioxidant capacity and phenolic composition of Andean Berry was investigated by (Gaviria et al., 2009). They reported that, the content of anthocyanins and total phenols with values of 201 ± 10 mg eq/100 g of fruit and 609 ± 39 mg eq/100 g of fruit, respectively. The antioxidant activity was studied by the methodologies 1,1-diphenyl-2-picryl-hydrazyl (DPPH: 2404 ± 120 values of mM de trolox®/100 g of fruit), ABTS (8694 ± 435 values of mg de ac. Asc/100 g of fruit) and FRAP (581 ± 29 values of mg de ac. Asc/100 g of fruit), all these results are comparable or superior to other Vaccinium species published in other researches (Capocasa et al., 2008; Çelik et al., 2008).
Recently, our  group  reported  that  (Maldonado  et  al., 2014) the aqueous extracts of Andean Berry contain total anthocyanins: 150.7 mg of cyanidin-3-glucoside equivalents/100 g of lyophilized; total phenols: 2546 mg of gallic acid equivalents/100 g of lyophilized. Phenolic acids such as chlorogenic: 126 mg/100 g of lyophilized; ferulic: 108 mg/100 g of lyophilized, coumaric: 63/100 g of lyophilized. In addition, this extract presented a high trapping capacity of reactive oxygen species (ROS), reactive nitrogen species (RNS) and hydroxyl radical scavenging capacity: 36147.5 ± 6274.7 (μmol DMSO/100 g lyophilized), total scavenger capacity to ROS and RNS: 29255.9 ± 6531.27 μmol Trolox/100 g lyophilized), 41775.2 ± 6168.2 μmol Trolox/100 g lyophilized), respectively, and ORAC value: 41775.2 ± 6168.2 μmol Trolox/100 g lyophilized). These properties could be partially explained by the presence of the high content of anthocyanins and phenolic acids (Maldonado et al., 2014).
In this study, it was reported for the first time the proapoptotic effects of an aqueous extract (juice) of Andean Berry on colon adenocarcinoma SW480 cells. Evidence was presented that a juice of Andean Berry was able to inhibit the growth of SW480 cells by triggering apoptosis and involving the oxidative stress which favours death of SW480 cancer cells. 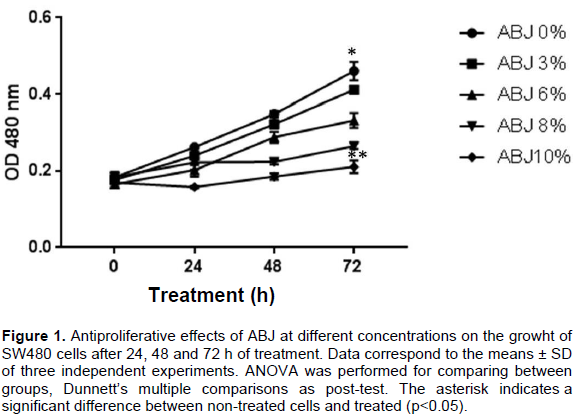 Effect of ABJ on SW480 cell viability, cytotoxic and activation of caspase 3
Figure 2 shows the  effect  ABJ  on  SW480  cell  viability,cytotoxic effect and caspase 3 activation after treatment at 8% ABJ (IC50 for 48h). The SW480 cell viability was reduced in a time-dependent manner whereas the cytotoxic effect evidenced by the increase on the RFU values corresponding to dead or dying cells were increased in time (Figure 2). Under the same conditions, the activation of caspase-3 was paralled to cytotoxic effect until 48 h. After 72 h of 8% ABJ treatment, the caspase-3 activity fell-down which suggests that most cells are dead by apoptosis and only a small number of these are dying by the apoptosis triggered by ABJ during all the treatment. 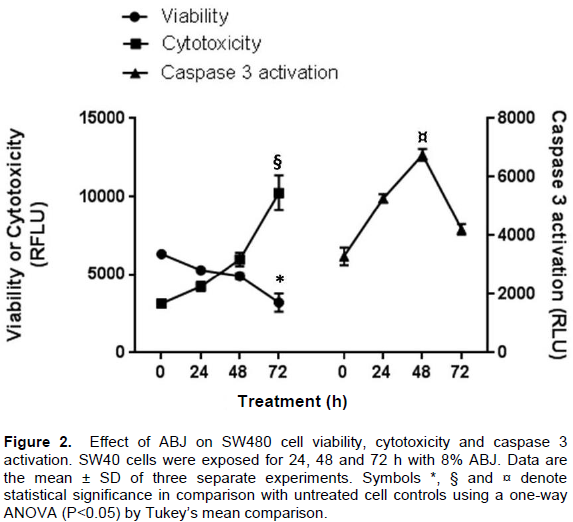 Effect of ABJ on apoptotic biomarkers in SW480 cells
Figure 3 shows that ABJ’IC50 induces phosphorylation of p53 at Ser15 with significant statistical differences (p= 0.04) compared with untreated cells, as well as ABJ´IC50 induces cleavage of PARP and caspase-3. In the other hand, it has already been established that phosphorylation of Bad at Ser 112 inactivates its proapoptotic function. Our findings suggest that ABJ´IC50 does not induce Bad phosphorylation; this may lead the increase of apoptotic-promoting activity of Bad and thereby contribute to the death of this human colon cancer cell line. 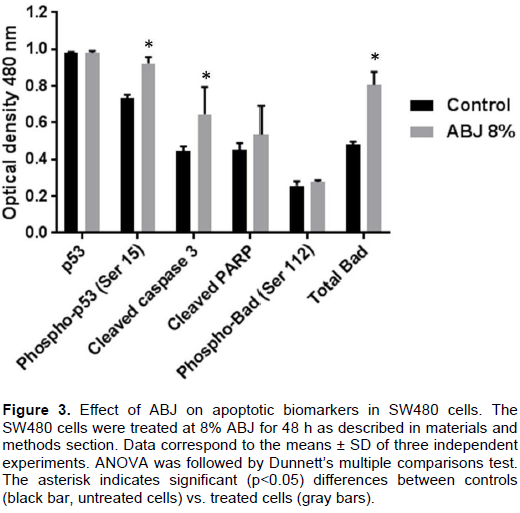 Intracellular ROS level and GSH depletion assay
Ratio of reduced glutathione (GSH)  and  oxidized glutathione (GSSG) was measured in SW480 cells after 48 h of incubation after treatment with ABJ. Increased levels of oxidized form of glutathione (formed as results of ROS scavenging) are indicative of oxidative stress. As can be seen from Figure 4, ABJ produced significant glutathione depletion as evident by the increased formation of GSSG particularly at the concentration of 8% v/v compared to vehicle control. 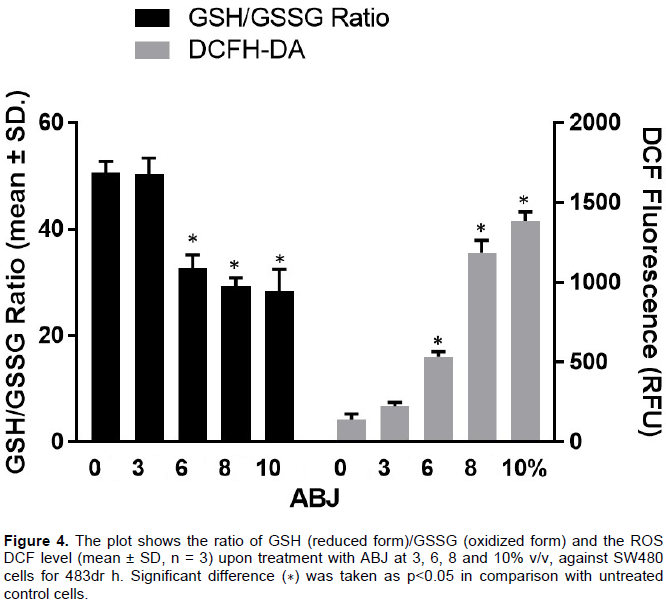 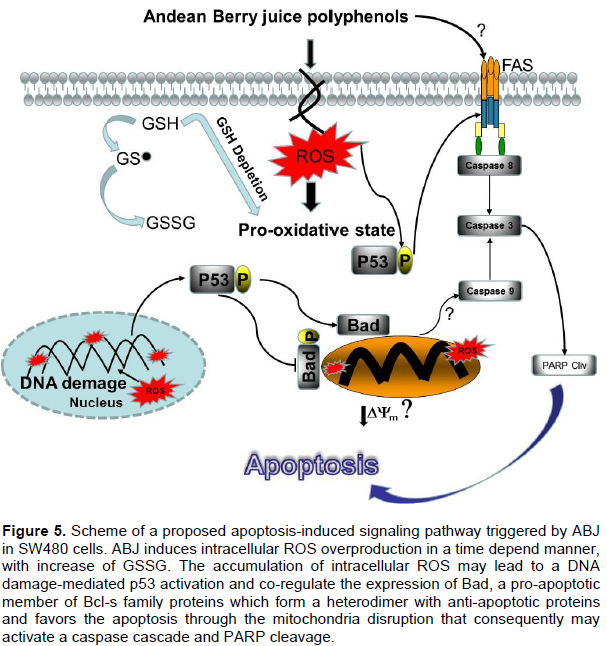 In a recent study, Carole Minker et al. (2015) identified which proapoptotic pathway is  induced  in  human  colon cancer cell lines (SW480 and SW620), exposed to proanthocyanidins (Pcys) extracted from 11 berries. They found that Lowbush blueberry extract triggers the strongest activity of all berries tested by the opposite blueberry. Pcys are less effective for DNA fragmentation. Finally, they concluded that Lowbush blueberry Pcy-induced apoptosis is mediated by TNF-R1, DR3, or DR6, these death receptors inducing caspases 8 and 9 activation (Minker et al., 2015). Further studies are in course in our group to gain more insight into the apoptotic mechanisms triggered by ABJ on colon cancer cell lines and in a preclinical model of colon carcinogenesis.

The ROS production was measured in the SW480 cells exposed to ABJ using DCHFDA, as shown in Figure 4, the ABJ induce ROS production in a concentration dependent manner, even ten-fold higher compared with untreated cells. This increase in ROS levels occurred when a decrease in GSH/GSSG ratio was also observed in ABJ-treated SW480 cells, indicating that SW480 cells are  under  a  condition  of  oxidative   stress   during   the apoptotic process, in spite of the antioxidant capacity previously reported and measured using free-cell living methods such as ORAC (Maldonado et al., 2014).

The concentration of ABJ used here on SW480 cells induced oxidative stress which may be involved in the apoptotic process because an increase of intracellular ROS may lead to a DNA damage able to activate the p53, in addition, the increase of ROS production may also activates the release of cytochrome c from mitochondria and favours the activation of caspse 9 previous to activation of caspase 3 (Pelicano et al., 2004; Lamy et al., 2008) demonstrated that apoptosis of SW480 cells treated with a flavonoid identified as lupulone at 40 mg/ml for 48 h was associated to the increase of ROS intracellular concentration involving release of cytochrome c, caspase 9 and caspase 3 activation. These effects were avoided when SW480 cells were exposing to vitamin C in the presence of lupulone (Lamy et al., 2008). Thus, these observations suggest that  ABJ  might  activate  in  SW480   cells   the   intrinsic apoptotic pathway; however, this hypothesis must be confirmed in further studies.

Recently, Khan et al. (2014) proposed that the fact that carcinogenic cells have higher levels of copper compared with non-malignant cells and may be more susceptible to the transfer of electrons with antioxidants to generate ROS, so damage to DNA by copper may be an important route by which carcinogenic cells can die in the presence of polyphenols, while normal cells can survive (Azmi et al., 2006).