Medicinal plants are being used for the treatment of several ailments by the local tribes in Mizoram, North East India. The present study was focused to analyze the antibacterial and antioxidant activities of a widely used traditional medicinal plant, Blumea lanceolaria. Total phenol content was found to be high in the ethanolic extract of leaf (33.91 mg GAE/g DW) in comparison to root and stem of the plant. Reducing activity was measured by potassium ferricyanide reducing (FRAP) assay and found to be highest in the methanolic extract of root (39.29 mg GAE/g DW). Methanolic extracts of root showed highest reducing activity of superoxide dismutase (9.4 SOD units/ mg protein) and ascorbic acid oxidase (1.52 ascorbic acid oxidase units/mg proteins). A positive correlation was obtained between total phenol content and antioxidant activities of the extracts. The screening of the antibacterial activity of different extracts was conducted by using agar well diffusion test against three human bacterial pathogens. Ethanol extracts of stem, root and leaf showed promising results against Staphylococcus aureus with high (10 to 12 mm) inhibition zone as compared to standard antibiotics (2 to 10 mm). This study concludes that B. lanceolaria has high antioxidant and antibacterial activities and could be used as a potent plant in the treatment of a variety of ailments.

Several new antibiotics are being produced annually by pharmacological industries, whereas resistance to these drugs by micro-organisms has also increased gradually. The mortality rates in the hospitals are increasing due to new infection caused by multi-drug resistant bacterial strains (Cohen, 1992). Moreover, the use of synthetic drugs can also have serious side-effects and are ineffective for sustainable disease management (Sydney, 1980; Cunha, 2001).  Hence, it is necessary to search the Replacement  of   synthetic   antimicrobials   with   natural products that can inhibit the resistance mechanisms.

Ethno-medicine has found a special place in lives of the people living in rural Mizoram. Due to the topography of the state, local people cannot avail all the modern medical facilities (Sharma et al., 2001). Thus, majority of the population is still following traditional methods of treatment to cure various diseases by using medicinal plants. B. lanceolaria (Roxb.) is a unique folkloric medi-cinal plant used by the native of Mizoram and is found in Thailand and Africa as well. A decoction of the leaves is taken orally to treat stomach ulcers, dysentery and wounds (Rai and Lalramnghinglova, 2010). More than 70 constituents have been isolated from the genus Blumea, including flavonoids, monoterpenes, sesquiterpenes, acetylenic thiophenes, triterpenoids, xanthenes, diterpenes, and essential oils. Blumealactones A, B, and C isolated from B. balsamifera exhibited antitumor activities against Yoshida sarcoma cells in tissue culture (Chen et al., 2009, Yasuo et al. 1988). Two acetylenic thiophenes, 63 and 64, isolated from Begonia obliqua showed antifungal activity against Epidermophyton floccosum and Pleurotus ostreatus (Chen et al., 2009; Ahmed and Alam, 1995). The essential oil of Blumea lanceolaria (Roxb.) Druce was analyzed by Dung et al., (1991) and methyl thymol (95%) was found to be its main constituent. As per the available literature, there is not much experimental evidence with regard to antimicrobial activities, total phenolic content, reducing activity and free radical scavenging activities on B. lanceolaria.

The present study was undertaken to evaluate the antimicrobial and antioxidant activities of different plants parts of B. lanceolaria. This study also assesses the correlation between in-vitro antioxidant activity of plant extracts and their total phenolic content.

Collection and preparation of samples

B. lanceolaria (Roxb.) was collected from Dampa Tiger Reserve forest, Mamit district (23°42’N 92°26’E) of Mizoram in the month of June, 2014. The fresh leaf, stem and root samples were washed thoroughly 2 to 3 times with distilled water, cut into small pieces of 2 to 3 cm length using sterile blade and dried in hot air oven at 37°C for 72 to 96 h. The dried plant materials were ground to fine powder and stored in air tight dark bottles at room temperature. 10 g of each plant materials were extracted  by  mixing  with  distilled  water (100 ml), 60% methanol (100 ml) and 95% ethanol (100 ml) in a waterbath at 40°C for 30 min. Extracts were ?ltered through Whatman No.1 paper ?lter and collected. Ethanol and methanol extracts were concentrated to dryness in a soxhlet apparatus at 60°C for 30 min and aqueous extracts were freeze dried. All extracts were stored at 4°C until further analysis (Wijeratne et al., 2006; Hatamnia et al., 2013).

The test bacteria from the stock cultures were spread on the surface of the solidified Nutrient agar using sterile L spreader. After drying the agar surface, antibiotic discs of streptomycin (10 µg), tetracycline (30 µg), erythromycin (15 µg), chloramphenicol (30 µg), norfloxacin (10 µg) (Hi Media, Mumbai, India) were placed on the agar plate and incubated at 37°C for 24 h. Antibiotic sensitivity of each bacterial pathogen was evaluated by measuring the inhibition zone (mm) around each antibiotic disc.

Evaluation of the antibacterial activity of the crude ethanolic, methanolic and aqueous extracts of B. lanceolaria parts was determined by the agar well diffusion method of Silvia et al. (2013), Shoba et al., (2014). Inoculum of the bacterial strains (108 CFU/ml) was spread using sterile spreaders into 90 mm petri dishes with Mueller–Hinton agar. Wells of 6 mm were cut with help of sterile cork borer and filled with 50 µL of 30 mg/ml of solvent extracts. Empty wells were used as negative control. The Petri dishes were incubated for 3 h at room temperature for complete diffusion of the samples (Das et al., 2010; Moller, 1966). After initial incubation samples were incubated at 37 ± 1°C for 24 h. Antibacterial activity was evaluated by measuring the inhibition zone.

Gallic acid was used as the standard which represents the phenolic compounds in the plant extracts. Aliquots of 0.25, 0.5, 1.0, 1.5, 2.0 and 2.5 ml from the Gallic acid stock solution (100 mg/ml) were taken in 6 different 10 ml volumetric flask. To each flask, 2.5 ml of 1N Folin-Ciocalteu reagent and 2 ml of 20% sodium carbonate were added. The mixture was allowed to stand for 15 min and the volume was made up with water to get a concentration ranging from 2.5 to 25 μg/ml. The absorbance was measured at 760 nm against reagent blank. A standard calibration curve was prepared by plotting absorbance Vs concentration and it was found to be linear over this concentration range (Singleton and Rossi, 1965).

100 µl of extract was taken in a sterile test tube to which 900 µl of double distilled water along with 500 µl of Folin Ciocalteau phenol reagent were  added.  The  sample  was  shaken  continuously  and incubated at room temperature for 10 min. Three ml of Sodium carbonate (20% W/V) was added to the sample, mixed and incubated for 10 min with addition of 10 ml of double distilled water. Similar procedure was carried out for the rest of different extracts with different temperature and time. The concentration of total phenol in the test sample was determined by extrapolation of the calibration curve (Singleton and Rossi, 1965).

Ferric reducing activity of plant extracts was determined according to Li et al. (2008). 1 ml of different extract solution was mixed with 2.5 ml potassium buffer (0.2 M, pH 6.6) and 2.5 ml of 1% potassium ferricyanide. The mixture was incubated at 50°C for 20 min. The reaction was stopped by adding 2.5 ml trichloroacetic acid. Further, 2.5 ml of distilled water and 0.5 ml 0.1% of ferric chloride were added and allowed to incubate for 30 min. at room temperature. Absorbance was measured at 593 nm. The absorbance obtained was expressed as gallic acid equivalent in mg per gm of dry weight (GAE/g) using gallic acid standard curve (Rao et al., 2013).

0.5 ml of plant extracts were mixed separately with 1 ml of 125 mM sodium carbonate, 0.4 ml of 25 µM nitro blue tetrazolium (NBT) and 0.2 ml of 0.1 mM EDTA in a test tube. The reaction was initiated by the addition of 0.4 ml of 1 mM Hydroxylamine hydrochloride in the mixture. Absorbance was measured at 560 nm using spectrophotometer (Agilent Technologies, cary 60, USA) at 5 min. interval. SOD activity was expressed as units /mg protein and unit of SOD was expressed as amount of enzyme required for inhibiting the reduction of NBT by 50% (Beauchamp and Fedovich, 1976).

Bacterial pathogens were tested for their antibiotic sensitivity against five standard antibiotics. All pathogens were found to be sensitive particularly against tetracycline, showing highest zone of inhibition (S. aureus – 10 mm, P. aeroginosa – 10 mm and E. coli – 8 mm). Norfloxin and chloramphenicol were also found to inhibit most of the pathogens. E. coli alone was found to be re-sistant against chloramphenicol and erythromycin. Streptomycin showed inhibition against all pathogenic bacteria but also exhibit least inhibition zones (2 mm) for assessing susceptibility (Table 1). 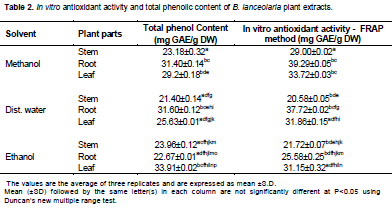 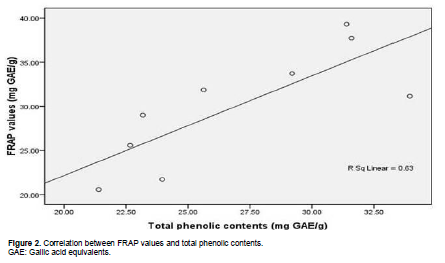 There was significant antibacterial activity in ethanol extract of all the plant parts tested (Table 1). The zone of inhibition measured with ethanolic extract of root and leaf was highest against S. aureus which was more than any of the known antibiotics used in this study. However, tetracycline showed more inhibition compared to plant extracts against gram negative bacteria. Though, B. lanceolaria ethanol and methanol extracts were showing significant inhibition of gram negative bacteria as compared to few other antibiotics used in the present study. Plants with high phenol content are important for food industry as it can inhibit oxidative degradation of lipid and improve the quality and nutritional value of food (Kahkonen et al., 1999). The highest concentration of phenol was found in ethanolic extracts of root. The concentration of the phenolic compounds is controlled by different factors like environment, development stage, type of solvent used and the degree of polymerization of phenolic (Fratianni et al., 2007;  Fernandez-Agullo  et  al., 2013). Phenolic compounds can stabilize and delocalize the unpaired electron, chelate metal ions, protect against microbial infections and act as a good source of antioxidant (Kahkonen et al., 1999; Boo et al., 2012). In vitro antioxidant activity of methanolic extracts of root B. lanceoria has highest reducing activity, suggesting that B. lanceoria extracts act as an electron donor which can react with free radicals to stop the radical chain reaction (Huda-Faujan et al., 2009).

Reactive oxygen species (ROS) can lead to many oxi-dative damages causing degenerative diseases such as atherosclerosis, heart diseases, aging and cancer (Finkel and Holbrook, 2008; Madhavi et al., 1996). Medicinal plants are considered to play a beneficial role in health sector by curing and preventing various ailments and diseases. The health promoting activities of antioxidants from plants can be attributed to reduce the potential effects of ROS. However, synthetic antioxidants such as butylhydroxyanisole and butylhydroxytoluene needs to be replaced with natural antioxidants as they also possess potential health risks (Oyaizu, 1986; Safer and Al-Nughamish, 1999; Li et al., 2008).

Therefore in today’s scenario, medicinal plants as a resource of medicine has become more important where oxidative stress is found to be one of the major causes of health hazards (Padmaja et al., 2011). Enzymes such as superoxide dismutase catalyze the dismutation of superoxide (O2−) into oxygen and hydrogen peroxide. Ascorbic acid oxidase is also an important enzyme often regarded responsible for the first line of defense against various oxidative stresses (Nicholas, 1996).

In the  present  study,  methanolic  extracts  of  root   was showing highest reducing, superoxide dismutase and ascorbic acid oxidase activities indicating that roots of B. lanceolaria are a rich source of antioxidants (Table 3). Phenolic compounds such as flavonoids, tannins and phenolic acids are known to contribute in antioxidant capacities of plants (Cai et al., 2004). The correlation coefficient (R2) between FRAP values and total phenolic contents for the different parts of medicinal plant extracts was 0.63 (Figure 2). A positive linear correlation between the antioxidant capacities and the total phenolic content of B. lanceolaria extracts indicates that phenolic compounds are major contributors of antioxidant activities of the plant. This result was in concordance with previous studies (Cai et al., 2004; Li et al., 2013). The findings of the present study demonstrated the potential of B. lanceolaria extracts as rich source of antioxidant and significant antibacterial activity.

The authors are thankful to Department of Biotechnology, New Delhi for financial support to BPS in the form of a DBT-Twinning project (No. BT/209/NE/TBP/2011) for North east India and for DBT - State Biotech Hub facility (BT/04/NE/2009 dtd. 22nd Dec. 2010) established by Department of   Biotechnology, Govt. of India, New Delhi. The authors thank Ms. Kirsten Miller, Department of Life Science, Natural History Museum, London, UK for the critical reading and the language editing of the manuscript.