The objective of this study was to evaluate the content of anthocyanin and total phenols, in some wild bilberry populations, grown in natural conditions in northern Albania. This study aimed at identifying the wild bilberry populations, whose fruits are rich in anthocyanin and as such, can be selected and cultivated for production in the future. Thirteen bilberry fruit (Vaccinium myrtillus L.) samples were collected from wild bilberry populations in Puka and Tropoja region. Collected fruit samples were evaluated for chemical traits (myrtellin, kuromanin, oenin, total anthocyans, and total phenolic compounds) using high-performance liquid chromatography (HPLC) analyses. This study confirmed significant chemical differences between two regions (Puka-Tropoja) as well as within one region. The bilberry fruit analyses showed that the total anthocyans (calculated as cyanidin-3-glucozide) concentration ranges from a minimum of 2473 mg/kg FW (Shale e madhe Iballe/Puke) to a maximum 7774 mg/kg FW (Maja e zeze Doberdol/Tropoje). In addition, it was confirmed that the total phenolic compounds (min 4558 to max 8980 mg/kg FW) was significantly higher for bilberry fruits samples collected in Tropoja compared to the ones collected in Puka region. Statistical analyses showed that elevation gradient has a great effect on chemical composition of bilberry fruit samples. It also showed that among analysed anthocyanidins, myrtellin have the highest concentration (43%).

Though the bilberry fruit in Albania is consumed either fresh or as processed juice, it is emphasized that so far no studies have been conducted on the factors influencing the quality of the fruit, which according to the literature data, mostly depends on the content of anthocyanin and phenols in the fruit. The cultivation potential of this plant in Albania is very high, particularly in the areas adjacent to the natural growth habitat.

Bilberry is considered as a niche product with a real potential for economic value and market. Within MAPs, bilberry plant (for fruit) has greater economic importance where quality production is obtained from natural populations of bilberry in several region of Albania. Bilberry plant is naturally grown as wild populations in the northern part of Albania, mainly in the regions of Tropoja, Puka, Dibra and Kukes (Demiri, 1983). The study area covered the two most significant regions as regards the wild bilberry production and bilberry covered surface in the country.

Spontaneous and uncontrolled collection (damage to fruiting branches during collection) has significantly affected the distribution and the number of bilberry plants in its natural habitat. Under such circumstances, the cultivation of the bilberry and its controlled production, in order to guarantee the natural regeneration of its natural habitats has become an emergency.

The main purpose of this study was to identify the main factors affecting the content of anthocyanin and phenols in the fruit as well as the impact of other climate factors such as elevation, exposure of the land, or plant associations, where bilberry grows etc.

In this context, this study is of interest due to the fact that it is able to identify some populations that are rich in anthocyanins and phenols, and can be used for cultivation in the future. On the other hand, the data of this study, which evaluate the impact of elevation, land exposure, etc, will serve precisely to the above-mentioned purpose. 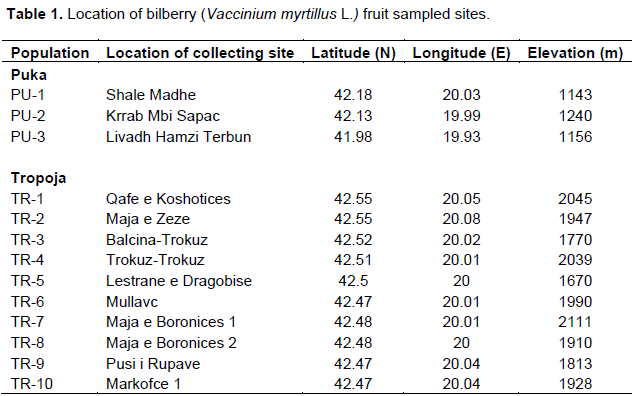 The elevation gradient for the collected bilberry samples ranges from 1143 m in Puka region up to 2111 m in Tropoja region (Figure 1).The study was conducted in 2015 in Puka and Tropoja region and the chemical analyses were performed in the beginning of 2016. Wild bilberry fruit was collected during the fruit-ripening stage (blue-dark fruit). There is a one-month difference between the two regions regarding fruit ripening. 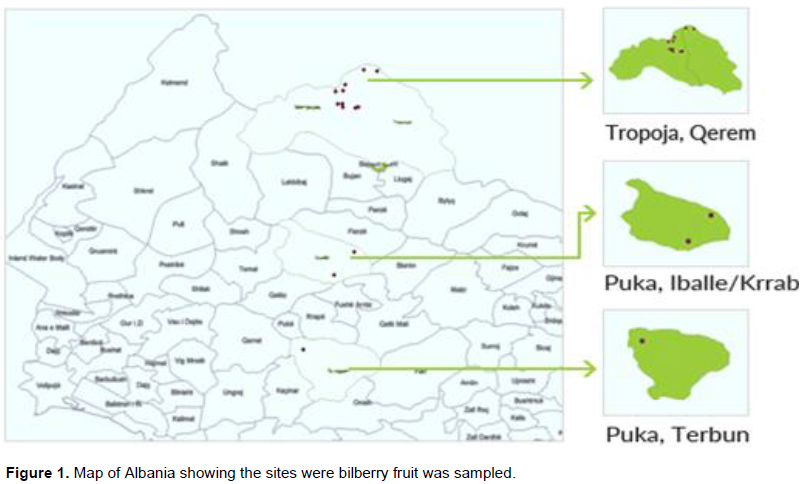 In Puka region, we picked the fruit early in July and in Tropoja region, we picked the fruit in August. Considering the morphological variability, the plant density, (Westhoff et al., 2014), (Puka 10 to 40% and Tropoja 25 to 80%) bilberry plant associations and the elevation gradient for bilberry population, we picked more bilberry fruit samples in Tropoja region than in Puka region.
For each bilberry fruit sample, we randomly picked 150 to 200 fresh fruits fully ripened. The fruits were hand-picked in order not to contribute to the fruit oxidation using metallic equipment. Plastic bags (air-dried) and cool boxes for transportation of the bilberry fruit from the field to the storage room were used. The fruit samples were kept at a temperature of -20°C until they were chemically analysed (Klosterneuburg Laboratory, Department of Chemistry and Quality Control, Vocational High School (HBLA) and Bachelor – Agromediterranean Faculty (BA) for Wine and Fruit Growing, Austria).
In order to identify the variability of the chemical content of the bilberry content we have analysed the main components such as anthocyanin (delfinidin-3-glucoside known as myrtellin, cyanidin-3-glucoside known as kuromanin and malvidin-3-glucoside known as oenin) as well as the total anthocyans and total phenolic compounds.
Sample preparation
In the laboratory, bilberry fruit samples were vacuum-packed and stored at -20°C. Fruit grinding while cooled with liquid nitrogen was done using Cryo-Mill. The obtained powder was stored at -20°C (Huang et al., 2012). For extraction and subsequent analysis, a part of the homogenized powder was weighed, added 3 times with 3 ml of the extract solution, put for 10 min in an ultrasonic bath, leached and then centrifuged for 10 min at 4700 rev/min. 70% deionized methanol + 30% water was used as extraction solution for total phenol determination, whereas methanol, water, acetic acid in the ratio: 85 + 15 + 0.5 were used for anthocyanins. The collected supernatants were diluted with deionized water to 10 ml and used for each analysis.
For total phenolic content determination, the diluted solution was mixed with Folin-Cioalteau reagent and sodium carbonate, and the resulting colour at 765 nm was measured in the photometer, calculated as caffeic acid equivalent in mg/kg fresh weight (Huber et al., 2005).
Quantification of anthocyanin and phenols
The instrument for quantification of total anthocyanins was HPLC 1090 with DAD FA and Hewlett-Packard with the method described by Eder et al. (1994) (Column: RP-LiChroCart_Kartusche 18250-4 (5 microns) from Merck).
The quantification of anthocyanin’s using spectrophotometry at 525 nm as detection wavelength with gradient comprises mobile phase; eluent A: 0.05 mMol/l, phosphate buffer pH = 1.8, and eluent B (in the following other): methanol, start with 15% methanol, go to 30% methanol in 30 min, go to 45% methanol in 25 min, go to 60% methanol in 5 min and hold for 10 min; thereafter go to 15% methanol in 5 min. The flow rate in this phase was 0.8 ml/min. In this analysis, anthocyanin quantification was based on cyanidin-3-glucoside standard (equivalent in mg/kg fresh fruit) using concentrations: 1.83, 9.13, 18.25, 36.50 and 91.26 mg/l, respectively. Retention time during this quantification was 20 min.
The statistical analyses were performed using SPSS software and the results at P values <0.05 are considered significant. There have been random selections on both populations and result indicators are calculated by supposing that data has normal distribution. 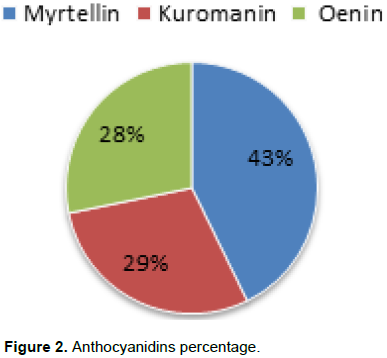 Myrtellin content (mg/kg fresh fruit) ranged from 373 to 1429 mg/kg FW and the highest content was found in the berry population "PU-3" in Puka region and in "TR-2" in Tropoja region. Regarding the other two anthocyanidins (kuromanin and oenin), the content was higher in the samples collected in Tropoja region, compared to Puka samples (Table 2). 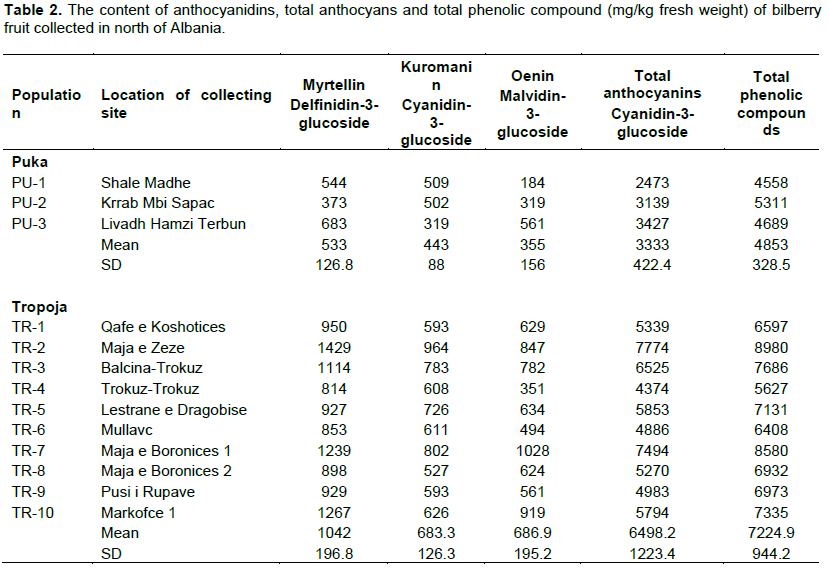 There are chemical content differences between the bilberry fruit samples collected in habitats without other bushes or forest plants, and bilberry samples collected in association with other  forest  trees.  This  study   showed that there is a chemical variability between the two geographical regions where bilberry fruit samples were collected, but these differences are present at a regional level.
Referring to the analyses data, there are differences among the berry samples, related to the content of anthocyanin and total phenols. The total anthocyanin content in bilberry fruits varied from 2473 to 3427 (±422.4 SD) mg/kg/fw (Puka pop) and 4983 to 7774 (±1223.4 SD) mg/kg/fw (Tropoja pop). Total phenolic compounds varied from 4558 to 5311 (±328.5 SD) mg/kg/fw (Puka pop) and 5627 to 8980 (±944.2 SD) mg/kg/fw (Tropoja pop).
The highest content of total anthocyans and phenolic compounds are found in the samples from TR-2 population. Population TR-2 is located on a subalpine area and northeast site of all explored sites and is exposed to the sun. Bilberry fruit samples exposed to the sun have higher content of anthocyanins also reported from other studies (Jovancevic et al., 2011). Other studies have shown that an increased monochromatic light at fruit ripening stage results in the increase of anthocyanins content in the bilberry fruit (Zoratti et al., 2014). The maximum anthocyanin accumulation in bilberry fruit is connected to the development stage (Upton, 2001; Zoratti et al., 2016), which corresponds to the full ripening stage (July for Puka region and August for Tropoja).
The total anthocyanin content was significantly higher in the TR-2 population in Tropoja region and PU-3 population in Puka region, whereas the total phenolic content was higher in TR-2 population in Tropoja region and PU-2 population in Puka region. Potentially, these bilberry populations could be the best populations for the selection and cultivation in the future.
Statistical analyses show that altitude of the collected bilberry samples site significantly affects (positive correlation) the anthocyanin concentration in bilberry fruit which were statistically proven as (p-value<0.05) for myrtellin, kuromanin, total anthocyans and total phenolic compounds (Table 3 and Figure 3. It has not been statistically proven that elevation gradient have effect on oenin concentration in bilberry fruits 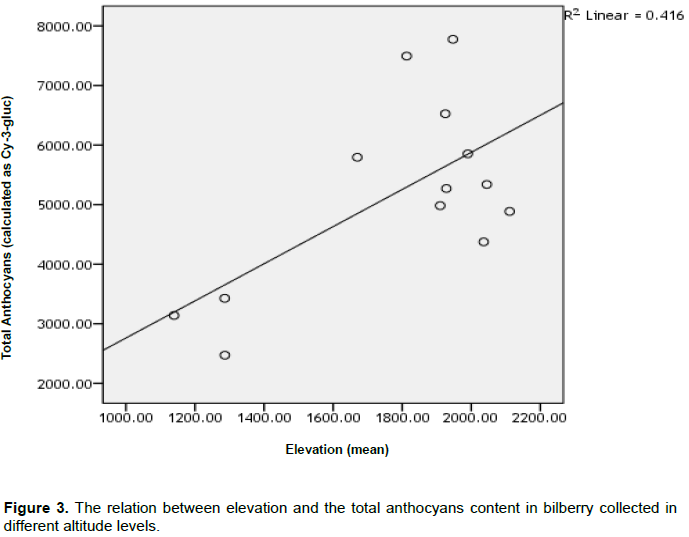 As presented in Figure 3, the total anthocyan in the bilberry fruit is affected by the latitude of the collecting site. With the increase of the altitude, the content of anthocyanins and phenols increases. This data shows that the populations with the highest content of chemical components are those collected in the sites 1947 to 2111 m above sea level. The differences may result due to environmental (He et al., 2010; Rohloff et al., 2015), soil and/or genetic diversity of bilberry populations (Dahlø, 2011). Among environmental factors, light and temperature have been shown to have a positive effect on the accumulation of anthocyanins during the fruit ripening period (Zoratti et al., 2015a). Other factors such as site conditions and quality of light also affect the fruit quality (Uleberg et al., 2012; Habanova et al., 2013).
Other studies have shown that fruits collected in northern areas have higher total anthocyanins contents (Uleberg  et  al.,  2012).  Temperature  and light  are   the main factors affecting anthocyanin accumulation in bilberry (Zoratti et al., 2015b) and this may be the reason why bilberry samples collected in high altitude (Tropoja) are richer in anthocyanin compared to the samples collected in Puka region where the temperature is higher.
Evaluation of total anthocyanin could be used for quality control of bilberry (Anja, 2013; Cesa et al., 2017), regarding which study provides evidence on bilberry chemical traits, which could be used for quality control of bilberry fruit collected in the study regions.
Finally, plant associations, soil properties and environmental condition do affect the chemical composition of chemical elements in bilberry fruit for which, these associations need to be further studied and investigated.

Bilberry populations, which grow in northern Albanian regions, are characterized by a large chemical variability which is present not only among regions (Puka vs Tropoja) but also at a regional level. The elevation gradient greatly affects the total phenolic compound and total anthocyanin contents.
Referring to the total anthocyanin contents, it  is  shown that the most suitable bilberry population in Puka region is the one located in "Livadh Hamizi" (PU-3), while in Tropoja region the most suitable population is the one located in "Maja e Zeze" (TR-2). Potentially, these identified bilberry populations could be the best populations for selection and cultivation in the future.