This study was conducted at research and farmers’ field. Seven new promising and three standard checks in total ten hybrid varieties were planted and evaluated in 2013 main season. At research field, the genotypes were tested under sole and inter cropping in two replications and each genotype was planted in two rows using spacing 0.75 cm and 0.30 cm between consecutive maize rows and between plants, respectively. However, at on-farm, the genotypes were tested on two farmers’ field each genotype planted in three rows solely under sole cropping. Hawassa-Dume common bean genotype was used for intercropping purpose and planted between two consecutive maize rows. The common bean was planted with 10 cm spacing between plants. Farmers were invited to evaluate planted genotypes at hard dough stage of the crop. The objective the study was to screen maize hybrids under both sole and inter cropping systems at research field and sole crop at farmers’ field and finally to select hybrids that best fit cropping systems for grain yield and other important traits. The results of the analysis showed that genotypes varied significantly for yield and other traits. The highest yields were observed for genotype-1 (10.6 t/ha) and genotype-3 (10.3 t/ha). However, at Hawassa Research Station, the standard checks varieties (BH-546 and BH-547) performed better compared with other genotypes under sole cropping system. The land equivalent ratio (LER) for genotypes ranged between 1.05 and 1.41. The highest LER was observed for genotype-1 (1.41) followed by the standard check (BH-546) (1.34). This study highlighted the need for testing genotypes for their compatibility to intercropping system.

Maize (Zea mays L.) is the second most widely cultivated crop grown by smallholder farmers under rainfed condition in Ethiopia. Maize yield in Ethiopia vary considerably across seasons and locations making smallholders livelihoods vulnerable to climate variability. Maize and common bean are two of the leading crops in their  respective   category   of   cereals  and    pulses   in southern Ethiopia. Accordingly, maize and common bean occupy 33 and 42% of the area devoted to cereals and pulses, respectively (CSA, 2017).

Intercropping systems play an important role in subsistence and food production in developing countries (Tsubo and Walker, 2002). It is most widely practiced in countries    where   arable   land    is    scarce   and   also contributes to biodiversity and food security (Mushagalusa et al., 2008). Land scarcity is one of the constraints facing small farmers in Ethiopia. In the southern Ethiopia, 40% of farmers have an average land holding of 0.1 to 0.5 ha with a further 30% having 0.51 to 1 ha (CSA, 2017). This led farmers to use multiple cropping mainly intercropping to increase yield per unit area and reduce the risk from crop failure due to climate change.

Ten three-way hybrid maize genotypes of medium maturity group (140-160 days) including three check varieties were used and planted at Hawassa experimental field under sole mono-cropping and intercropping with haricot bean (Table 1). In addition, the genotypes were planted on two farmers’ field under sole cropping system only at Hawassa-Zuria district in 2013. Common bean variety (Hawassa-Dume), well adapted to Hawassa, was used for the experiment. In  the  maize-bean  intercropping  treatment,  bean was planted at the same time as maize, between maize rows. The experiment was laid down on randomized complete block design with two replications. Each genotype was planted on 7.65 m2 and 11.475 m2 areas at on-station and on-farm, respectively. A 75-cm row to row spacing and 30-cm plant to plant spacing was used for maize while haricot bean was planted between the rows of maize with 10-cm plant to plant spacing. Common bean was planted on the same date with maize. Morphological (plant and ear height), reaction to diseases (common rust, turcicum leaf blight and gray leaf sport), agronomic (number of ears per plant and grain yield) traits were measured for maize while only yield of common bean was measured for this study. 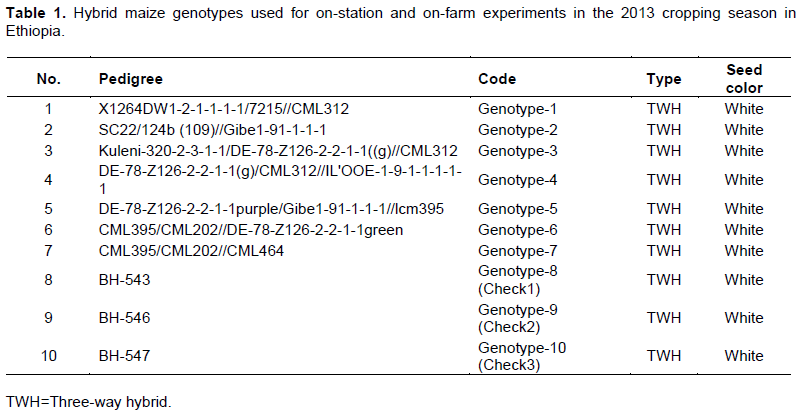 All treatments received fertilizer rates of 110 kg N and 46 kg P2O5 ha-1 for maize and 46 kg P2O5 and 37 kg of N ha-1 for common bean recommended for Hawassa research field. Nitrogen was used in the form of Urea while phosphorus was applied in the form of DAP. For maize, all the phosphorous and a third of nitrogen was applied at planting while the remaining 2/3 was side dressed between 25 and 35 days after emergence (V5-V8 stage). For common bean, both phosphorus and N were applied at planting. 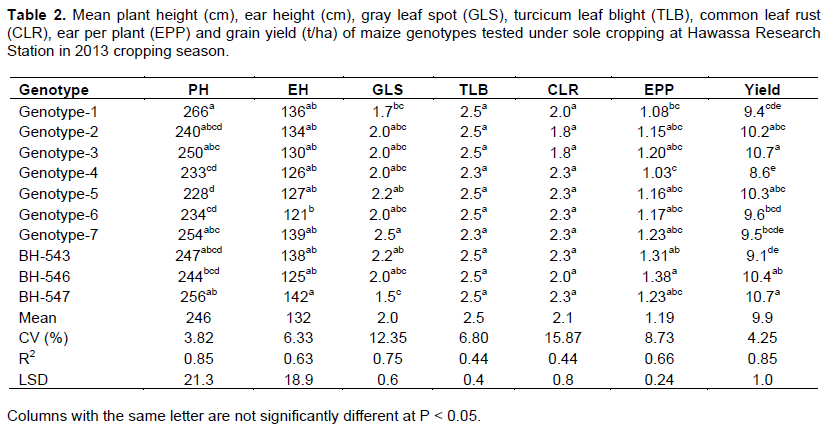 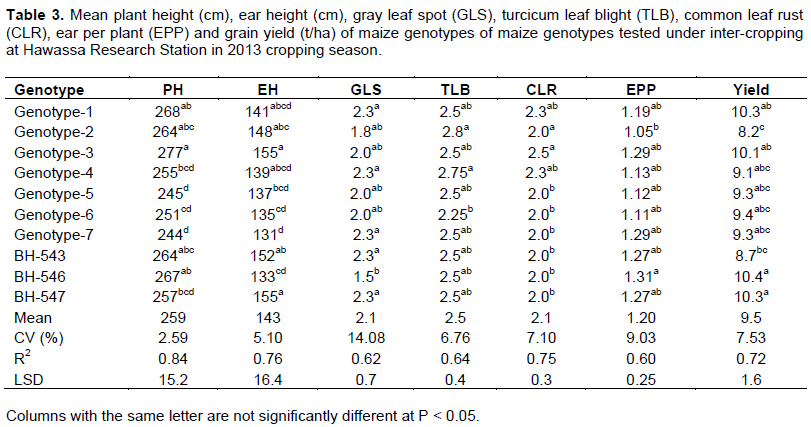 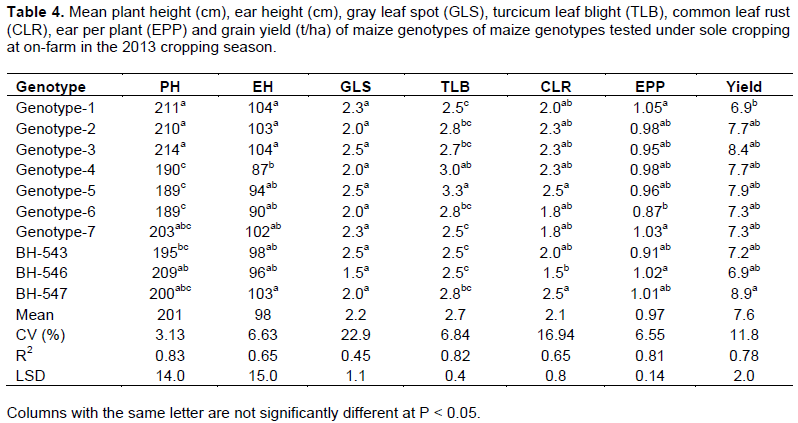 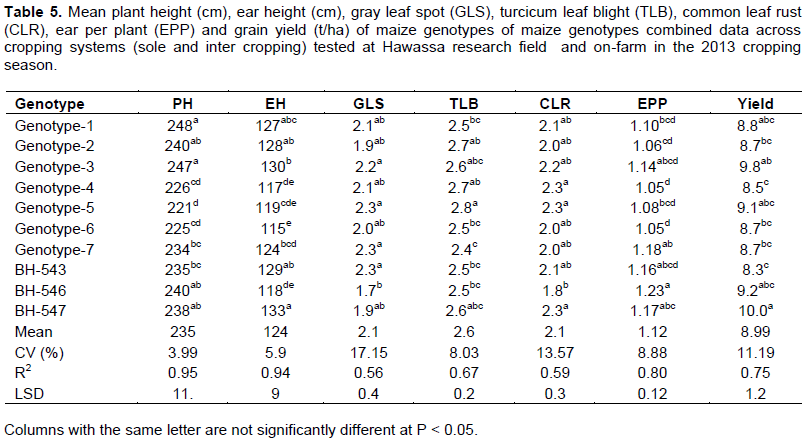 Under sole cropping at on-station, sole cropping at farmer’s field, and in combined analysis, the best check was BH-547 based on grain yield performance whereas for inter-cropping the best check was BH-546 (Tables 2 to 5). This corroborates with the previous finding that BH-546 had erectophyl leaf arrangement and intercepted more radiation under high planting density at Hawassa (Seyoum et al., 2019). This highlights the need for breeding maize genotypes that can yield higher both under sole and intercropping systems in the region where maize-common bean intercropping is a common practice. The highest intercrop common bean yield was observed for BH-543-common bean intercropping albeit maize yield was the least among check varieties indicating BH-543 had less competitive advantage. The average plant and ear heights were shorter at on-farm, 201 cm and 98 cm, respectively, compared with the corresponding average plant height (246 cm) and ear height (132 cm) for sole cropping system at on-station (Tables 2 and 4). This could be because crops at on-station received better management  and  hence  good growth (taller) and higher yields. The number of ears per plant varied significantly among genotypes with the highest number of ears per plants (1.38) for BH-546, consistent under sole and intercropping systems (Tables 2 and 3). High yield observed for BH-546 could in part be due to higher number of ears per plant (prolificacy) and hence higher grain number and ultimately yield. On the other hand, genotypes with the least number of ears per plant, Genotype-4 and Genotype-6 had lower yield compared to other genotypes (Table 5). According to Assefa et al. (2018), high number of ears per plant as characteristics of modern hybrids compared with old hybrids. This highlights the need to consider genotypes with higher yield and yield components under different cropping systems to enhance maize yield.

Maize genotypes responded differently to the most common maize foliar diseases GLS, TLB and CLR. BH-546 had better tolerance to GLS compared with check variety and the other new hybrids under both cropping systems, sole at on-farm, intercropping systems at Hawassa on-station and in combined analysis (Tables 3 to 5) whereas BH-547 check variety had better tolerance to GLS under sole cropping at Hawassa research field (Table 2). However, no significant difference among genotypes for response to GLS was observed at on-farm (Table 4). This could be due to the sporadic nature of the disease where it infests when all the susceptible host and favorable environmental conditions are met. Tewabech et al. (2012), have reported higher infestation of maize genotypes at Hawassa maize research site, consistent with this finding. Genotypes-1, 3 and 4 have shown high sensitivity to common leaf rust disease under intercropping condition at Hawassa. Similarly, Genotype-5 and BH-547 had high common rust diseases score at the on-farm. On the other hand, highest TLB infestation was observed for Genotypes-2 and 4 under the intercropping and for Genotype-5 at the on-farm condition while the least was observed for Genotype-1, 7, BH-543 and BH-546 (Tables 2 to 5). Foliar diseases such as GLS and TLB are the most maize yielding limiting factors in the region that causes as high as 36% yield losses depending on time of disease onset, disease severity and on hybrid maize susceptibility and yield potential (Tewabech et al., 2011, 2012). This indicates the need for evaluating genotypes for the most common foliar diseases before release in Ethiopia.

The overall LER was evaluated to derive land benefits associated with intercropping of maize genotypes and the bean variety Hawassa-Dume. The LER in intercrops ranged from 1.05 to 1.41. LER greater than 1 suggests that   there   is   greater   land   area  requirement  for  the monoculture system or greater relative yield for intercropping of maize genotypes with common bean variety Hawassa-Dume. For instance, LER of 1.41 observed in this study for genotype-1 indicates that there is 41% requirement for the monocropping system or 41% greater relative yield for the intercropping of genotype-1 and Hawassa-Dume. Previous studies on maize common bean intercropping in Ethiopia reported high LER of intercropping system (Walelign, 2014; Tolera et al., 2005; Assefa et al, 2016). For instance, Daniel and Legesse (2019) reported the highest LER (1.95) from maize genotype (BH-540) combined with common bean genotype Hawassa-Dume. However, all maize genotypes in this study had >1 LER indicating that the land productivity will be greater when genotypes are planted in intercropping than monocropping (Table 6). This study highlights that varieties selected based on monocropping performance may not necessarily do well under intercropping system. O’Leary and Smith (1999) reported the need for testing genotypes under intercropping if corn-bean intercrop is desired. Similarly, Masuka et al. (2017) suggested that for any breeding program, it is important to regularly assess the improvements and monitor the efficiency of the breeding program by considering different breeding methods.

The results of this study showed significant variation among genotypes for yield and other traits. Although genotypes used in this study were developed for monocropping system, some genotypes had higher LER indicating that they are compatible to inter-cropping system. For instance, Genotype-1 demonstrated higher compatibility to the intercropping system providing an opportunity for farmers to grow under both cropping systems. In regions with maize commonly grown as an intercrop, it is of paramount importance to evaluate maize genotypes for their compatibility to intercropping system at early stage of genotype evaluation. Some morphological traits such as canopy architecture and tolerance to high planting density could be considered for varietal selection. The results of this study highlight the need for participatory varietal selection where farmers’ criteria could also be met for fast-track release and better adoption of maize varieties.

This research was funded by ACIAR (Australian Centre for International Agricultural Research) through Sustainable  Intensification  of   Maize-Legume  Cropping Systems for Food Security in Eastern and Southern Africa (SIMLESA) project. The authors thank Mrs. Maedin Tadesse, Mr. Zerihun Beshir and other Hawassa maize team for their assistance in data collection.