A map of the World: Cognitive injustice and the Other

This paper employs critical geography to advance a fresh philosophical orientation of cognitive injustice and Otherness. Operating under the assumption that modern cartography is entangled with power, knowledge and politics, this study examines how maps construct and sustain the identity of the social, cultural and political Other. Synthesizing Boaventura de Sousa Santos’ work on abyssal thinking and ideologies of the Other, a conceptual framework for demonstrating how maps are inscribed with power was presented, theorizing the racialization and naturalization of geographies and identities. The result, inevitably, is a world separated by abyssal lines that threaten global human connectivity.

The relationship between cartography and critical geography should be brought to the forefront of discussions about global power relations and the philosophical orientation of Otherness. Otherness is achieved through carefully orchestrated processes of social, cultural and political Othering – many of which are responsible for today’s protracted disputes between nations, sectarian violence, and even ethic and racial discrimination during pandemics such as the COVID-19 outbreak. Against this backdrop, critical geography is committed to emancipatory politics, progressive social change and, of course, systematic map critique. Its theoretical links to anticolonialism, critical race theory, feminism, Marxism, postcolonialism and poststructuralism offer insight into the relations of power and knowledge, drawing upon decades of scholarly theorization, empirical work, and activism.
This article demonstrates that critical praxis is possible in education, especially through the application of what Santos (2006, 2008, 2018) refers to as abyssal  thinking. Abyssal ideologies of the Other pervade contemporary and enduring cartographic productions in neogeography, the geoweb, and web-based mapping. To justify this position, this research is grounded in a constructivist, poststructural paradigm and after the background of critical geography is presented, the scholarship on Otherness is reviewed and a framework for synthesizing abyssal thinking with the Other is presented. This framework is referred to as abyssal Othering and is applied to one case study of how maps produce space, geography, territory and identities. Finally, a coda is provided to this theoretical discussion for various stakeholders, reflecting on the broader beneficial impacts of deconstructing and decolonizing maps. 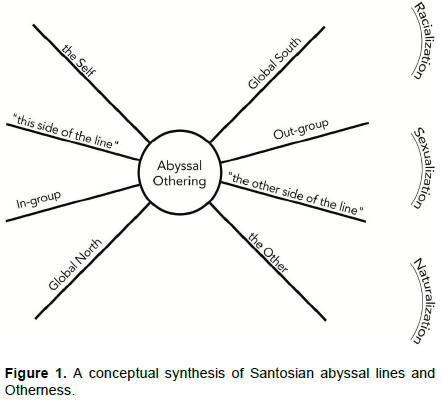 This article argues that maps work dialectically within social and cultural contexts to reinforce ideologies of the Other. The presented case study adds flesh to the theoretical bones of my proposed framework of abyssal Othering, revealing how maps are imbued with institutional power, producing highly skewed worldviews of certain geographies, territories and identities. Where do we go from here? The suite of arguments in favor of decolonizing maps, and curricula, may contain the seeds for cultivating belongingness and inclusion – the only viable solution to the intractable problem of Otherness. In Santosian thought, post-abyssal thinking is promoted to bridge the radical, and often violent, lines that divide society into disparate realms. The goal is to achieve co-presence between both sides of the abyssal lines, recognizing the diversity of knowledge, people and places.
Following the lead of schools in Toronto and Boston, perhaps other school districts can make concerted attempts to replace the Mercator projection with more accurate maps. Members of the Boston School Committee have already allowed the use of the Gall-Peters projection and the Winkel tripel projection, the former  being  the   preferred  map  of  the United  Nations Educational, Scientific and Cultural Organization because of its geospatial accuracy. Much more work is required in order to decolonize and problematize the Eurocentric structures embedded in myriad social institutions, however. What is needed at this juncture is a collective focus on global citizenship education to confront the Otherness of modernity. What this looks like in practice depends heavily upon those advocating global citizenship but the end result, inevitably, is achieving human connectivity through global social justice and global cognitive justice.

The author would like to dedicate this work to BenAnthony Lavoz – a gentleman and a scholar.