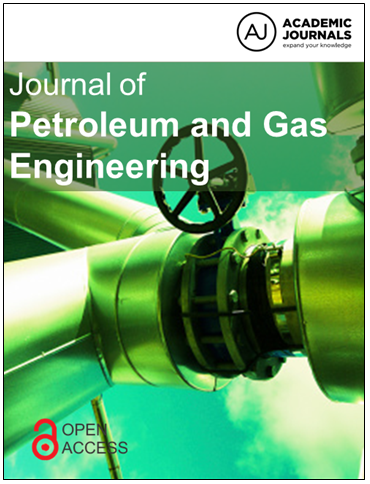 This study is concerned with the water coning phenomenon that takes place around production wells of hydrocarbon reservoirs. In this paper, the development of artificial neural networks to predict the water saturation buildup around vertical and horizontal wells with a good level of accuracy is described. In the development of expert systems, it is assumed that water encroachment originates from an active aquifer which is located under the hydrocarbon reservoir (reservoir with bottom water drive). A high-fidelity numerical model is utilized in generating training data sets that are used in structuring and training the artificial neural networks. The artificial expert systems that are developed in this paper are universal and are capable of predicting the change of water saturation around the wellbore as a function of time and the prediction process is faster than a reservoir simulator and requires less data, which saves time and effort. With the help of these models, it will be possible to predict the position of high water saturation zones around the wellbore ahead of time so that remedial actions such as closing the perforations that produce the water can be implemented on a timely basis.

Many hydrocarbon reservoirs contain an active water aquifer. The drilled wells are always completed to produce only hydrocarbons. As oil production continues, water starts to appear in the wellbore. This water is undesirable as its presence around the wellbore decreases the well productivity and needs more facilities to be handled, treated and disposed of at the  surface resulting in extra investments and operating costs. The height of the water cone stops increasing if the upward dynamic flow forces become equal to the downward gravitational forces. The water will be produced once the height of the water reaches the wellbore. By continuing to produce the hydrocarbon with water, formation around the wellbore will be saturated with water in the shape of a cone, a phenomenon that is referred to as water coning. This study analyzes the water coning phenomenon. The water coning behavior has significant importance in hydrocarbon production, and the ability to predict its future behavior will improve and help in better managing reservoirs experiencing water encroachment. The behavior of the water coning in an oil reservoir is predicted successfully using Artificial Neural Networks (ANN) by predicting the change of the water saturation distribution in the reservoir over time,  and  the  prediction process is faster than a reservoir simulator and requires less data, which saves time and effort. The developed neural networks were designed to be used for vertical and horizontal wells in communication with a bottom water aquifer. These developed neural networks can be useful in optimizing production by finding the optimum perforation interval or the optimum production rate to delay the water production.

Data used to train the artificial neural networks were generated from a numerical reservoir simulation model. Two reservoir numerical models were implemented in radial and rectangular coordinates. The reservoir properties are assumed to be homogeneous and isotropic. In terms of fluid properties, the reservoir conditions are assumed to be above the bubblepoint pressure to ensure that no free gas is present in the reservoir. Furthermore, capillary forces were ignored assuming no transition zone. The reservoirs are assumed to be horizontal with uniform thicknesses. The radial reservoir model was used to generate data for vertical wells and the rectangular reservoir model was used to generate data for horizontal wells. The gridding for the radial system was in three dimensions, where the number of grid blocks was 30×1×25. The thickness of all the grid blocks is equal and the spacing of grids in the r-direction was designed according to the following equation: 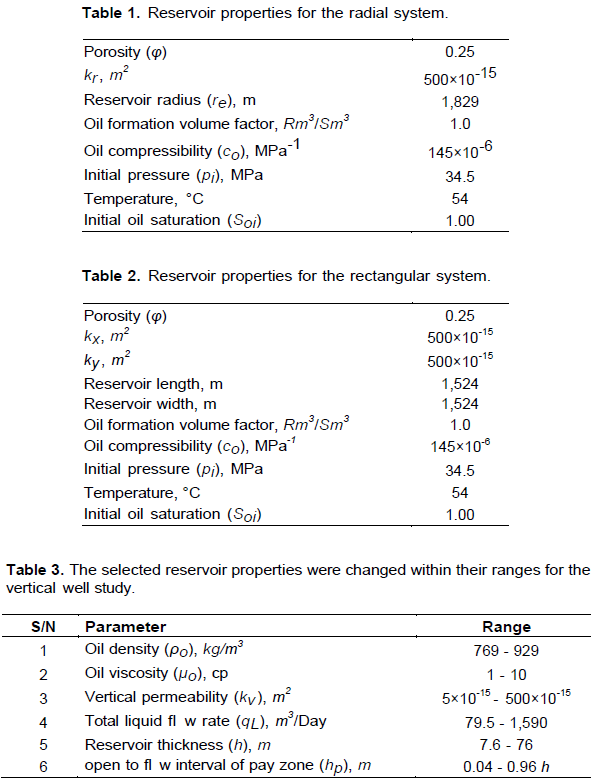 A total of 233 data sets were generated randomly.  Each combination was used to create a new reservoir model. All of the runs were designed for 10 years. The water saturation data, for all the blocks as generated by the simulation runs, were collected and prepared for the ANN training process. The ANN used for training is a feedforward network. The principal inputs are six parameters, which are:

The outputs are the water saturation values for all the blocks in the reservoir model at the end of each year. The 233 scenarios were divided into three sets; 210 scenarios were used for training,  11  for  validation  and  12  for  blind testing. Training and validation data are used in the training of the ANN and the testing data are only introduced to the network after the end of the training process to test the new ANN. Training the neural network started by including all water saturation values for all the blocks of each reservoir, which will produce a network that can predict the water saturation for the entire reservoir. However, this did not result in a capable network that could predict the water saturation values with a good level of accuracy. The next trial was to reduce the amount of data to simplify the problem for the neural network, and at the same time not to generate a large catalog of neural networks. The volume of data was reduced more to simplify the problem by taking the data for only one layer instead of the 25 layers, but these efforts were not successful once again. Then again, the data was reduced by taking the data of a single layer and considering only the 6 blocks. This time, a good network was generated and the absolute error was less than 10% for all the predicted water saturation values. The absolute error is calculated using the following equation:

After succeeding in designing a satisfactory network, the goal now is to increase the complexity of the problem and reduce the number  of  the  networks  needed  to  predict  the  water saturation for the reservoir.

The complexity was increased by including the data for the 10 years and not only for one year. The produced networks were good. Increasing the number of blocks to 16 blocks was tried, but the efforts were not successful. At the end, 25 networks were considered, where each network predicts the water saturation for each layer at the end of each year for 10 years.

A total of 314 combinations were generated randomly and for each combination, a reservoir was created. The horizontal well was always placed in the center of the square reservoir. This created a symmetry, which reduces the amount of data to be considered, and in return, will reduce the time needed to train the neural network.

After running the numerical simulation for all the 314 reservoirs for 10 years, water saturation data was collected and prepared for training the neural networks.

The input list required to generate the blocks’ water saturations as outputs, contains seven parameters, which are:

The data collected was only from the vertical plane (x-z plane) which contains the horizontal well. The water saturation for each block at the end of each year was collected. Training the neural network using the water saturation values for the blocks in a single column, produced 13 different neural networks. The data for the 314 reservoirs were divided into 3 groups: 284 for training, 15 for validation, and 15 for blind testing. The resulting ANN is considered good when the predicted water saturation of the testing data has an absolute error of less than 10% for all values. The structure of the ANN was selected after trial and error. The network with the lowest error found was the feedforward network. The learning function with the lowest error was the gradient descent with momentum weight and bias learning function. The training function with the lowest error was the conjugate gradient backpropagation with Polak-Ribi´ere updates. The transfer functions which showed the lowest error was the hyperbolic tangent sigmoid transfer function. The neural network structure consists of the input and the output layers and two or more hidden layers. In each layer (input, output and hidden), the number of neurons must be specified. The number of neurons in the input layer is 7. The number of neurons in the output layer is 150. A table of 150 neurons is required because each column has 15 blocks and the water saturation value for a single block was taken at the end of each year for 10 years.

As explained earlier, in this case, 25 ANN were created. They were tested using data from 12 different reservoirs. The average absolute error was less than 10% for all the layers of all 12 reservoirs. The structure of all the networks consists of one input layer, one output layer and two hidden layers. For each network, the outputs were the water saturation values for the blocks at the end of each year, for 10 years. Figure 1 shows the structure of the generated ANN for the first layer. The network has 6 inputs in the input layer, 46 neurons in the first hidden layer, 37 neurons in the second hidden layer, and 60 outputs in the output layer. The average absolute error for each layer of the reservoirs is found to be between 0.07 and 1.67%. Two reservoirs (reservoir #230 and #233) were selected, from the reservoirs used to test the generated ANN, to show the capability of the ANN in predicting the water saturation. Reservoir #230 has the highest average absolute error (Figure 3c), among the 12 tested reservoirs, for the predicted water saturation values, and reservoir #233 was randomly selected. Figure 2a shows the surface map of the water saturation distribution for reservoir #233 from numerical simulation data. Figure 2b shows the same water saturation distribution but with predicted data from ANN. The prediction has a very low error, and the water cone shape is captured clearly. Figure 2c shows the absolute error on a surface map to give a better way of visualizing the error and its location. The highest error is 5.9% and it is observed in a very small area. Figure 3a  is  for  the surface map for reservoir #230 for the water saturation using the data from the numerical simulation. Figure 3b is the surface map for the same reservoir using data predicted with the ANN. Figure 3c shows the absolute error. Prediction for this reservoir has the highest error among the 12 reservoirs used for testing, but the shape of the cone has developed, which is clearly visible from the ANN model. 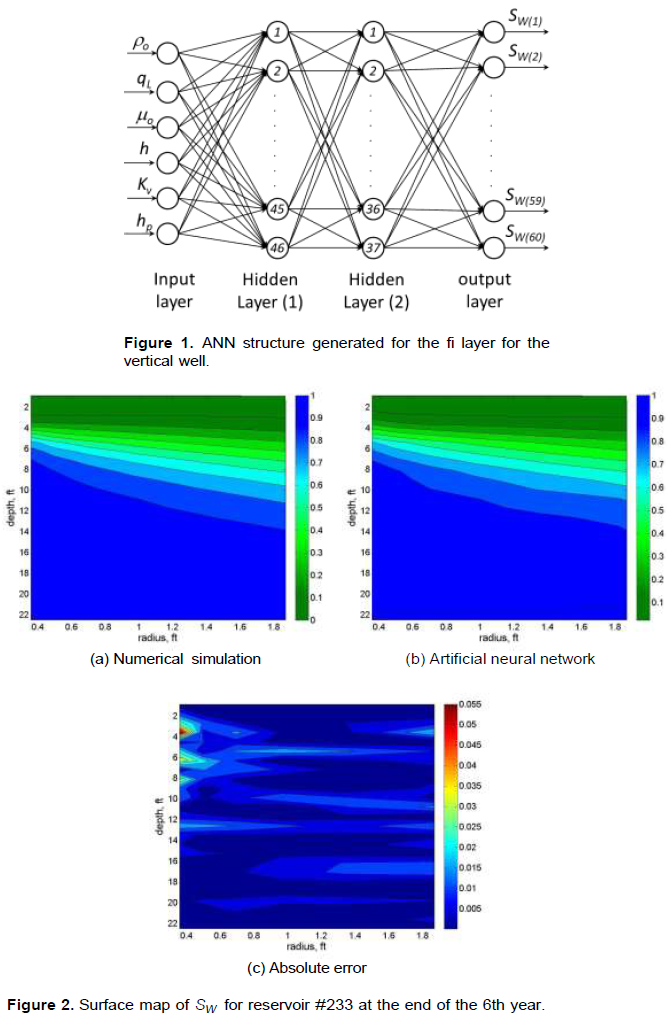 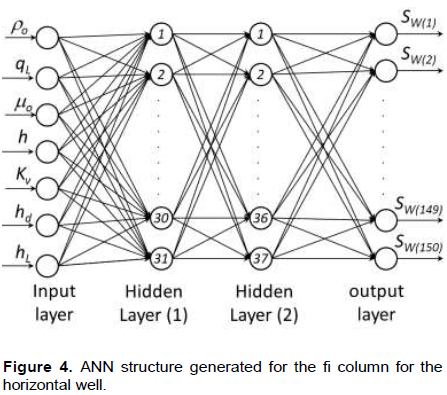 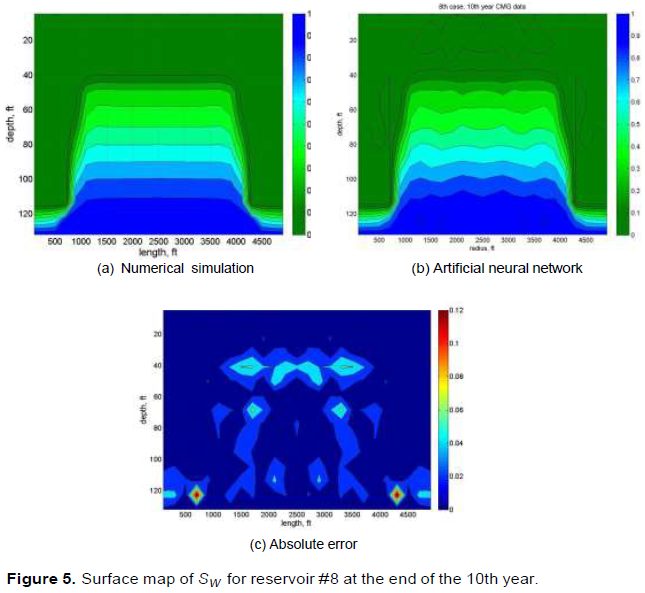 The ANN was able to predict the shape of water crest very effectively. There are areas which show an absolute error larger than 10%, but they are all at the bottom of the water cone which is not critical in performance calculations (Figure 5c). The more important areas are those which show where the water front has reached. The high error zones occur at the transition zones, similar to results of the vertical wells, and the high error occurs because saturation gradients are high over a small area, which creates a greater challenge to the ANN to predict the water saturation values accurately. The examples of the applications described in this paper show that accurate saturation predictions matching the numerical simulation results effectively have been attained. With the help of the expert systems developed in this paper it will be possible to generate results showing the development of water saturation profiles as a function of time without resorting to reservoir simulators which require large amount of data and large computational times.