In developing countries like India, Nigeria and Thailand, rice husk is seen as an agro waste product. This is due to the lack of technical knowledge on its potential use as an additive. Recently, it has been evaluated as a good renewable energy source and a substitute, even for fossil fuel, to generate electricity (Aase et al., 2013). Rice Husk is the result of the rice milling process. It  is  also  referred to as rice hull in literature. It contains a mixture of antioxidants as well as oil (12-13 wt.%) and 4.3 wt.% of highly unsaponifiable components. This fraction includes: A form of vitamin E named, tocotrienols (Figure 1), gamma-oryzanol (Figure 2) and beta- sitosterol (Figure 3). All of these elements may aid in lowering the plasma levels of different parameters of the lipid profile. Rice husk also contains ferulic acid (Figure 4), and high amounts of dietary fibers. 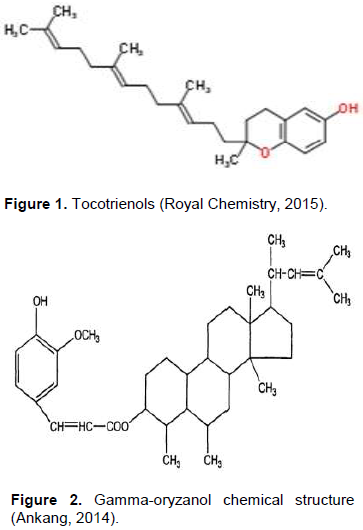 Some studies show that rice husk contains inorganic arsenic (toxin and carcinogen) (Figure 5). Rice husk  was found to be an effective adsorbent of para- dicholorobenzene  with a pH range from 1  to 12 (Mahamani, 2015). 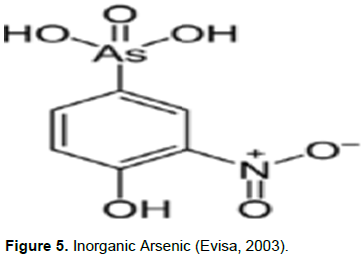 Hay is generally dried grass that is used as a fodder for animals. It generally includes a mixture of various types of grasses such as orchard grass, Bermuda grass, fescue, brome, and ryegrass depending on the type of region. It should be noted that sometimes plant materials from oat, wheat and barley are also cut and mixed together as hay. Most commonly, stems and dead leaves are mixed together after the harvesting of the grain is over and these can also be used as hay in the form of straw. All these materials are dried to remove moisture and the result is a dried grass type of material referred to as hay (Avick et al., 2012). The use of hay as an additive in drilling fluid is still an unexplored technique and hence very little information is available in literature on hay properties and the use of hay as an additive for drilling fluids (Annually Drilling Report 2008). As a result, authors are unable to provide enough literature background on physical and chemical properties of hay, unlike rice husk.

In order to start designing an environmentally friendly drilling fluid, three organic waste additives were selected, which are the hay barn mud, rice husk and rice husk ash. The base of the drilling fluid is 500 ml of 5% and 10 % bentonite mud. A mud samples were prepared according to Table 1.

After preparing each mud sample, the properties of the mud have to be measured. These properties include the rheology, mud filtration, and pH. The rheological properties of the mud samples are measured using a viscometer to obtain the shear stress values at 600 and 300 RPM. The gel strength is also measured using the viscometer by obtaining the shear stress value at 3 RPM. The plastic viscosity and yield point are calculated using the following formulas (IADC Drilling Manual, 2014):

The pH of each mud sample is measured by using a pH meter. The electrode is placed in the mud sample until the value is stabilized. The pH is then read and recorded from the pH meter.

The properties which have been examined for  these  additives  are pH values, amount of filtrate loss, and the mud cake thickness in order to analyze how these additives could have an effect on the mud properties; whether it improved the mud or made it worse, by comparing between the natural initial properties of plain additives mixed with water and the properties of the mud when the additives have been added (Ryen, 2011).

The testing of the additives revealed that these additives did not have an effect on the density of the mud; however they did have an impact on the other properties such as the rheological properties, as shown in Table 2. Moreover, the pH value was checked for all the additives and the results are shown in Figure 6. 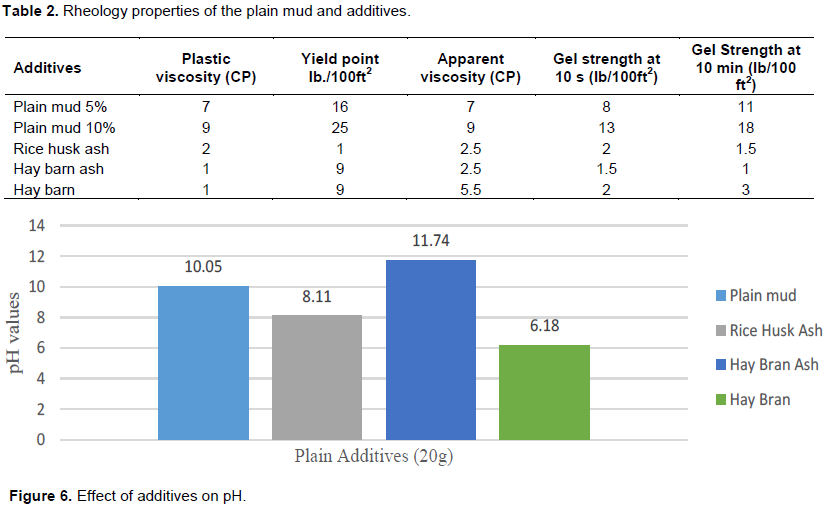 The additives in different concentrations have been added to the 5 and 10% bentonite mud. The RHA will not improve the rheological properties of the mud, as the results shows; there is a decrease in the yield point (YP) compared to the standard concentration of plain mud for both samples. As shown in figure 7, the YP and  Gel strength (GS) increased with an increase of RHA with same amount of mud  but  increasing amount of mud results in increasing of YP and GS. PV viscosity values of the RHA mud are independent on the amount of RHA as it remains approximately the same. This can be explained due to the chemical composition of RHA. As the pH has been measured, it can be seen that it is decreasing by the amount of two units in pH from 9.6 to 7.4, also the pH of plain RHA decreased from 8 to 7.5 as shown in Figure 6. This shows that the positive charges of the RHA neutralize the negative charges of Bentonite, and therefore  some  of  the  Bentonite   molecules   will   lose their functionality and thus, the YP and GS will decrease as shown in Figures 7 and 8. 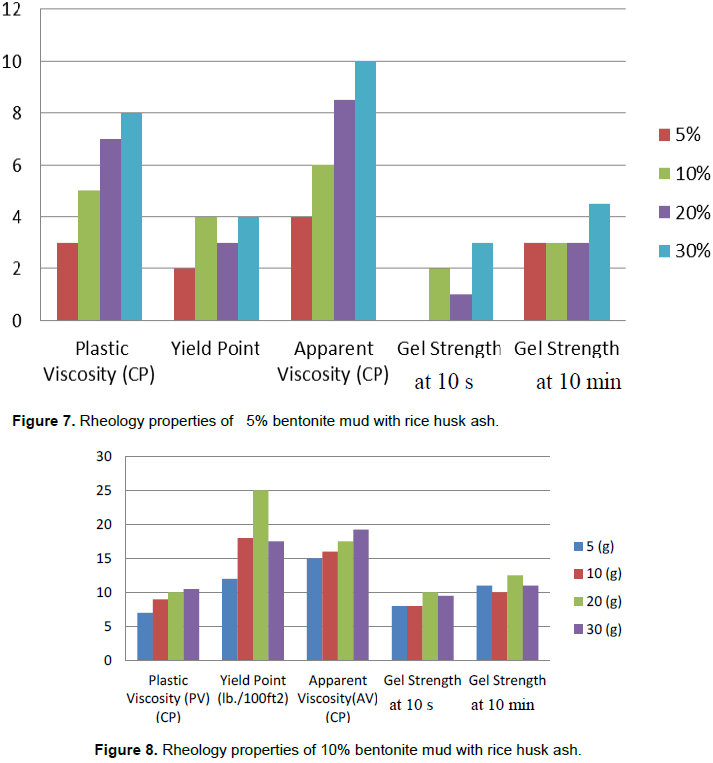 The results of this additive are shown in figures 9 to 12. Based on the results shown, adding hay barn and hay barn ash leads to an increase in YP, GS and PV only if the amount of hay barn added is more than 20 g, for both  5   and 10%  bentoniate  mud  in Figures  9   and  10, compared to the standard mud. This shows that the rheological properties of mud depend on the amount of HB.

For the HBA mud the YP, GS and PV are reduced for both sample as shown in Figures 11 and 12, but whenever the amount of HBA is increased, the rheological properties of the mud increases as well. 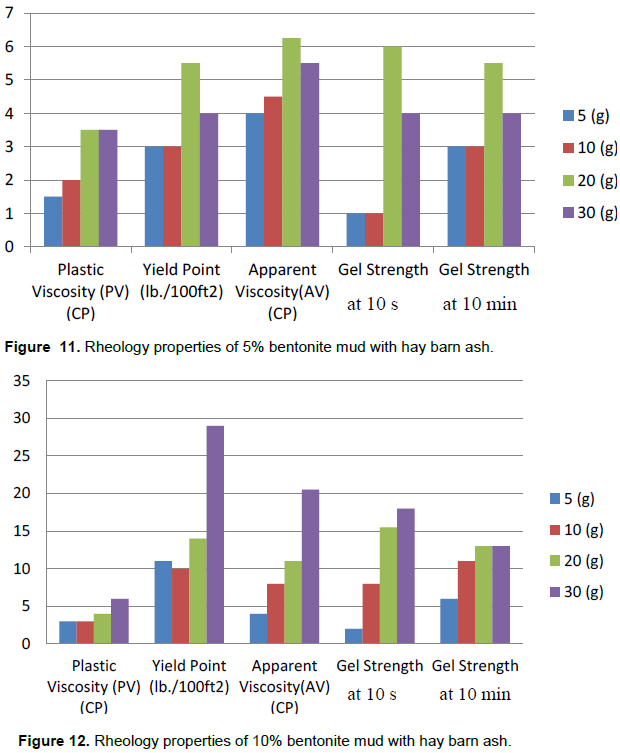 For this vol. % of Bentonite that has been added to the mud, as mentioned previously; the acceptable range for yield point, which has been practiced in the industry, should be in the range of 20 to 30 lb. /100ft². This  means that the added amount of HBA must be controlled in such a way as not let to the values of yield point and gel strength exceed the acceptable range just like in 10% bentonite sample  with 30 g of HBA added to the mud, as shown in Figure 12; the YP is 29 lb./100ft2, which is in the acceptable range of 20 to 30 lb. /100ft². Therefore, if the industry wants to use this additive, they should control between both HBA and mud amounts.

All the experiments were performed under the same low pressure and low temperature conditions. The temperature  was  kept  constant  in  the  range  of  60  to 70°C for all the experiments. Three different pressures e.g. 20, 40, 60 and 100 psi were used throughout this research.

The results of the four new additives have been used to improve the water-based mud (plain mud) properties. The test method has been done based on API standard. Following API standard of preparing the samples and keeping them covered for 24 h then start taking measurement, or by following the API standard, the mud samples were prepared and kept covered for 24 h before taking the measurements (Khaled and Mahmood, 2012). Plain additives mixed only with water were also tested in order to check their properties, similar to what was done for the other mud additives. Throughout the research, bench marking will be done based on the plain mud.

The results for the RHA mud filtration test are presented in Figure 14.  As mentioned, RHA was used for both samples with different mass.

Based on the results shown in the Figure 14 compared to the other additives which have been used in this research, RHA has the lowest amount of filtration. This can be explained based on the compositional structure of the additive. Phenyl Propanoid, a structural polymer called lignin, creates a layer that is highly resistant to the passage of water when combined with silica. Such property makes this material a valuable fluid loss control additive that can be utilized in the drilling industry (Erik and John, 2010). The composition of RHA also clarifies that the bonding between RHA and Bentonite will cause an  increase  in   the   distribution,   hence   reducing   the filtration loss rates (Khodja et al., 2010).

Filtration loss control was measured for these two types of mud with the same amount of additive, just like all other types of mud, and the results are presented in Figures 15 and 16. Based on the results shown in Figures 15 and 16, when comparing between HBA and HB, it is clearly seen that the filtration loss for the HB mud is less than the filtration loss for the HBA mud. However, HBA and HB are seen to be the worst additives in terms of the amount of filtrate loss. Like all other additives, this can be explained based on the chemical composition of hay barn and hay barn ash. For both additives, the negative charges of the molecules tend to have less attraction between them and the bentonite molecules, which will result in a higher filtration amount. 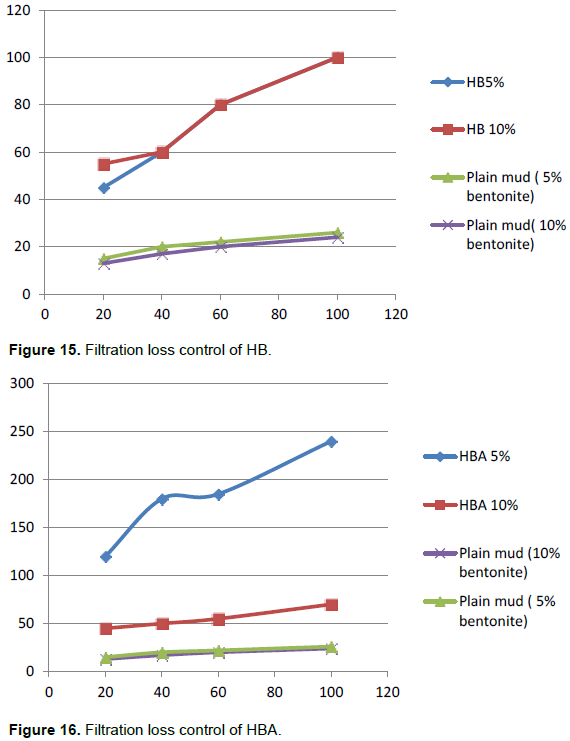 From all of the plots and results shown in the previous pages  that  were  conducted  in   laboratory  tests  of  3 different environmentally friendly drilling fluid additives to examine their feasibility to be drilling fluid additives in actual oil and gas fields, the effect of these additives on the rheological properties, filtration loss, pH as well as the mud cake thickness.

The RHA will not improve the rheological properties of the mud compared to the standard concentration of plain mud for both samples. However it shows great improve in terms of filtrate loss and mud cake thickness compared to the other additives which have been used in this research, RHA has the lowest amount of filtration and mud thickness. Hay barn and hay barn ash leads to an increase in YP, GS and PV only if the amount of hay barn added is more than 20 g, for both samples; 5% percent bentonite mud and 10% bentoniate mud. So, the rheological properties of mud depend on the amount of HB. It is clearly shown that the filtration loss for the HB mud is less than the filtration loss for the HBA mud. However, HBA and HB are shown to be the worst additives in terms of the amount of filtrate loss.