The economic strength of caregivers of orphans and vulnerable children in Akwa Ibom and Rivers States, Nigeria

The true statistics of orphans and vulnerable children (OVC) in Nigeria is not well known. Therefore, a lack of empirical data on the economic conditions of OVC in Nigeria has hampered the development of effective intervention strategies to mitigate their economic needs. This study assessed the economic activities and capabilities of caregivers in enrolled vulnerable households in Akwa Ibom and Rivers States into a project being undertaken by Association for Reproductive and Family Health (ARFH) on OVC. A cross sectional survey was conducted in 8 Local Government Areas in Akwa Ibom and Rivers States. Information on demographic and socio-economic characteristics of caregivers or heads of the households were collected. Descriptive statistics, T-test and X2- test were used for data analyses. There were 13,631 respondents/caregivers from both Local Government Areas. The commonest economic activity was petty business. The respondents did not have any prior training on other income generating activities. A sizeable proportion of caregivers saw finance as a major constraint to their business climate. The majority of caregivers of OVC in these states did not earn a living wage. Therefore, they will require vocational, business and financial literacy training for effective household economic strengthening program as an intervention strategy of any project.

The burden of orphans and vulnerable children (OVC) in Nigeria is not well known as the available information is scanty  and  inadequate.  A  situational  assessment  and analysis of OVC in 2008 gave an estimate of about 17.5 million OVC in the country (Daily Trust (2011); NRSA, 2009). This suggested that for every 10 Nigerian children, one of them is likely to be an orphan, 1/3 of whom is a maternal orphan and two-thirds are either paternal orphans or both (Daily Trust, 2011; NRSA, 2009; Save the children, 2015). In fact, the HIV/AIDS pandemic in recent years have increased the number of OVC and the poor socio-economic climate in Nigeria has resulted in the growing population of vulnerable households. The attendant hardships on the caregivers in providing basic needs for the OVC cannot be over-emphasized. These caregivers must have been experiencing difficulties on a daily basis in securing access to social basic services like education, food, portable water, protection, good hygiene and good health for their children or wards. Indeed, studies have reported that caregivers are over-burdened and not economically capable of providing for their orphans and vulnerable children (UNICEF, 2008; Nsagha et al., 2012). The consequences of the inability of caregivers to provide for their OVC are enormous. Often such a child is exposed to abuse, exploitation and social exclusion. The Rapid Assessment Analysis Action Planning (RAAAP, 2004) showed that a vulnerable child is less likely to enroll in school, more likely to drop out of school, more likely to be at higher risk of being involved in risky sexual behavior, and participate in substance abuse.  Also it is well known that a likely consequence of poverty is to influence the food security status of households which can lead to an increase in the likelihood of risky sexual behavior among female children, a risk factor of HIV/AIDS (UNICEF, 2008). However, lack of reliable empirical data on the socio-economic conditions of OVC in Nigeria has hampered the development of effective policies and programs to address their specific needs. While we know that poverty is associated with orphan state, the relationship to level of poverty is not so clear.  A question which sometimes come to mind is ‘how poor is poor?’ Some studies reported disparities or inequalities exist in economic situations of households (Awoyemi and AbdulKarim, 2009; CDC, 2011; Kochhar and Fry, 2014; Fagbamigbe et al., 2015). There is the increasing realization that poverty itself is dynamic “that some of the poor are not poor all of the time” meaning that an historical harmony has been established between poverty and vulnerability (Yaqub, 2000). So there is the need to know the economic climate of vulnerable households in Nigeria to provide a road map for developing appropriate intervention strategies for mitigating poverty of OVC caregivers. Previous studies have shown that household economic situation is positively and significantly associated with access to health care services and other basic needs of children (Oritz, 2007; Celik and Hotchkis, 2000). Hence, any effective strategy, expected to mitigate the impact of   the    burden    of    poverty    on    orphans and vulnerable children requires a household economic assessment (HEA). HEA has been defined as a framework for analyzing how people obtain food, non-food goods and services (such as access to education and health of children) and how they might respond to changes in their external environment like a drought or a rise in food prices (Holzman et al., 2008).
Thus, a Household Economic Assessment will inform the portfolio of interventions that will reduce the economic vulnerability of the OVC families and empower them to provide for the essential needs of the children they care for, rather than relying on external assistance (Economic Strengthening (2016). Besides, a good knowledge of the baseline economic situation of the vulnerable households will guide the prioritization of type of support for the caregivers of these OVC households and a platform for the future evaluation of any intervention.
Therefore, the objective of the present study is to assess the socio economic activities and capabilities of caregivers in OVC households enrolled in a LOPIN project by the Association for Reproductive and Family Health (ARFH). The study will determine their sources of household income and expenditures, household assets, coping mechanisms during periods of emergency, and potential income generating activities that can increase household livelihoods. The saying that ‘If what happened yesterday is reflected in today’s status and what happened today influences tomorrow’s status’, then the findings of the present study will inform positively the Household Economic Strengthening intervention strategy of the Association of Reproductive and Family Health (ARFH) LOPIN REGION 1 project for orphans and vulnerable children, including the  kind of income generating activities that would be most beneficial for  vulnerable households  in Rivers and Akwa Ibom states of Nigeria to undertake.

This is a descriptive cross sectional survey conducted in 5 Local Government Areas (LGAs) in Akwa Ibom state and 3 others in Rivers state. The LGAs in Akwa Ibom states are: Ikot Ekpene, Okobo, Oron, Uruan and Uyo while those in Rivers State are: Port Harcourt, Eleme, and Obio/Akpor. The LGAs were purposely selected because they constitute the PEPFAR/USAID priority LGAs with high prevalence of HIV and OVC burden (PEPFAR, 2012). There were 5,254 and 8,377 vulnerable households already selected for intervention in Rivers State and Akwa Ibom State, respectively. The National Vulnerable Assessment Questionnaire was used to identify the vulnerable households (Federal Ministry of Women Affairs and Social Development, Nigeria, 2009; Bamgboye et al., 2017). The household economic assessment, was carried out between May and July  2016  by  the  Association  of  Reproductive  and Family Health (ARFH), a local non-governmental organization located in Ibadan, South West Nigeria.
Data collection
A structured- questionnaire adapted from MEASURE Evaluation OVC tool kit was used to obtain information by personal interview on the demographic characteristics of the caregivers of the identified vulnerable households, their household socio economic characteristics, including household income, saving and loans practice as well as being able to access and obtain membership of a savings groups (MEASURE Evaluation, 2014). There was also an enquiry about their income generating activities and interests of the OVC caregivers. These caregivers were also asked about the constraints or obstacles to doing business as well as their general perceptions of their economic situations. Ethical consideration was through an informed consent obtained from each respondent.
Data analysis
Descriptive statistics such as means, medians and standard deviations were used to summarize quantitative variables while categorical variables were summarized with proportions and percentages. The wealth index was calculated using standard methods as described in previous publications (Fagbamigbe et al., 2015). The Student-T-test and X2- test were used to determine significant differences between two mean values and associations between any two categorical variables respectively. The results were presented in appropriate tables and graphs. The statistical analysis was carried out using SPSS version 21 (IBM SPSS, 2007). 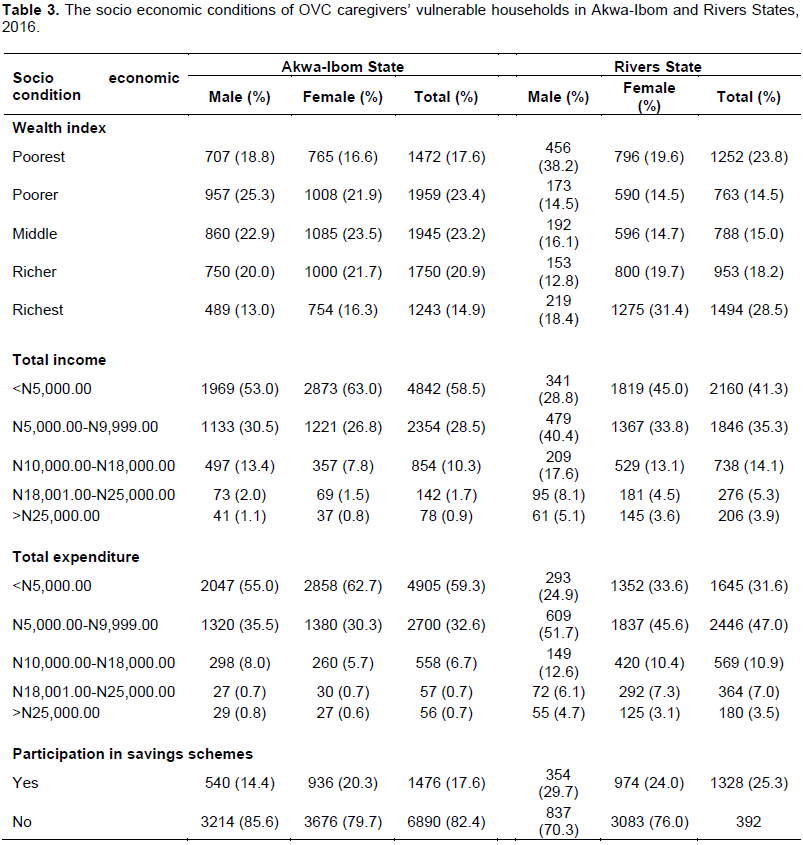 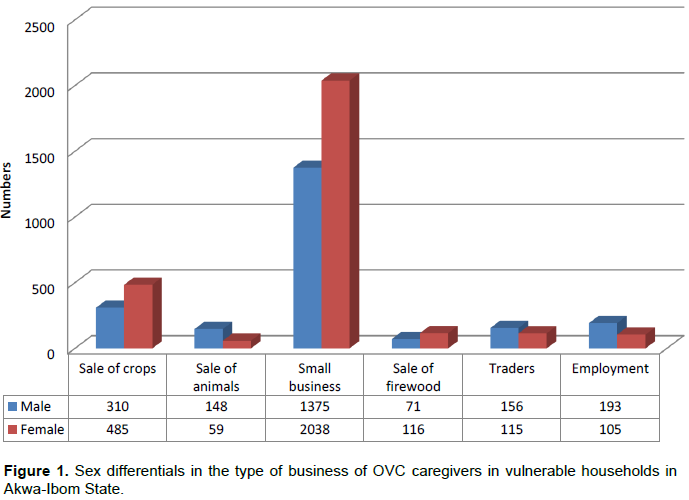 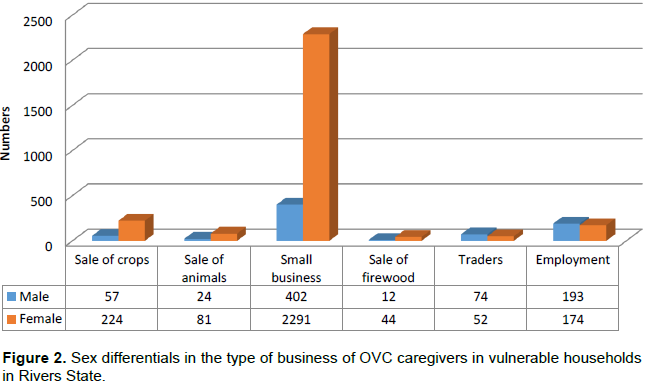 Constraints for doing business by sex
In Akwa-Ibom State, a low demand for their products is one of the major constraints for doing business reported by 18.1% of respondents with similar proportions in both sexes. And about 11.0% reported that poor market outlet constrained them from doing business similar in both sexes (10.5% males, 11.3% females). However, the major constraint to doing business expressed by a very sizeable proportion of the respondents (88.8%) irrespective of sex was finance [female (89.1%) and male (88.4%)]. Less than 5% attributed heavy taxation, HIV stigma, and poor skill as constraints to embarking on business in Akwa Ibom State.
The situation was similar in Rivers state where 13.9% of the caregivers indicated low demand for products as constraint to business similar in males (15.5%) and females (13.4%). Less than 5% mentioned poor access to market (3.0%) as constraints to business lower to what was reported in Akwa-Ibom state. These results presented in Table 4 also revealed that the major constraint to doing business was lack of finance mentioned by more than three-quarters of the respondents (76.4%) and this was higher in females (81.8%) than males (57.1%). Less than 5% mentioned stigma issues, taxation, and poor skill as other constraints to business in this state. There were no sex differentials in these constraints. 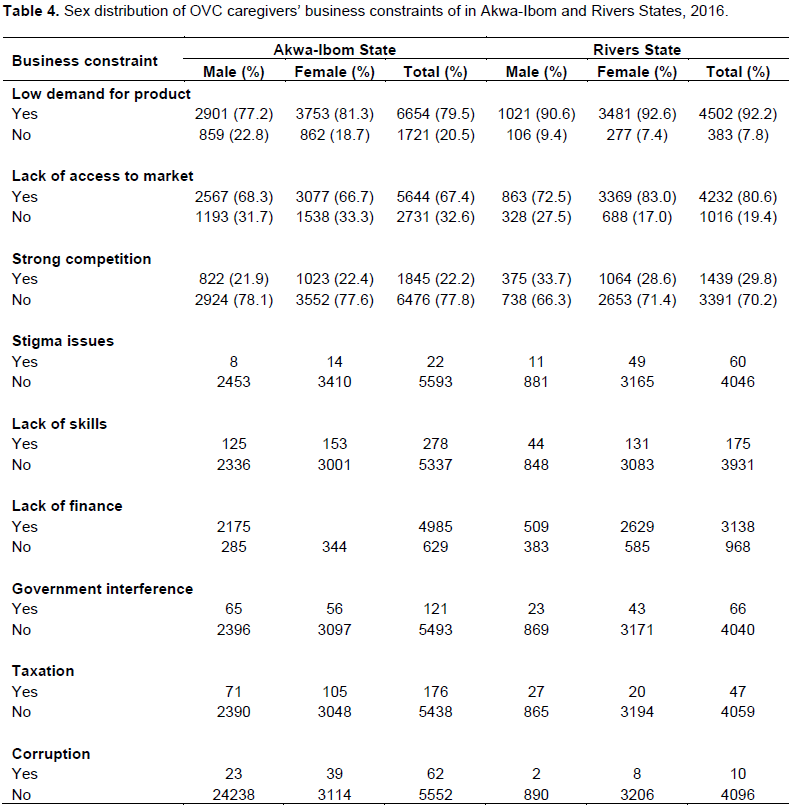 Table 5 showed almost 60% of the respondents from Akwa-Ibom state would like to embark on petty trading if given an opportunity to make a choice and this was lower in males (51.6%) than females (66.3%). However, a fifth of the males in Akwa Ibom would love to engage in livestock compared with only 5% of the females if there is opportunity in future.

In Rivers State, 52.1% (males: 53%; females: 51.9%) of the respondents would like to be petty traders in the future. However, about 10% of the caregivers would love to learn tailoring and this was similar in both sexes.
Rural/urban differences in business climate of OVC caregivers in Akwa-Ibom and Rivers States
The study showed that slightly less than two-thirds of the respondents (63.2%) living in the rural areas of Akwa-Ibom State, engaged in small business compared to almost three-quarters of the respondents (73.8%) living in the urban areas. A higher proportion of respondents in rural areas (19%) engaged in the sale of crops compared to only 6% of respondents residing in the urban areas. However a higher proportion of urban dwellers were in paid employment (10%) compared to those in rural (4.2%) areas as presented in Figure 3. 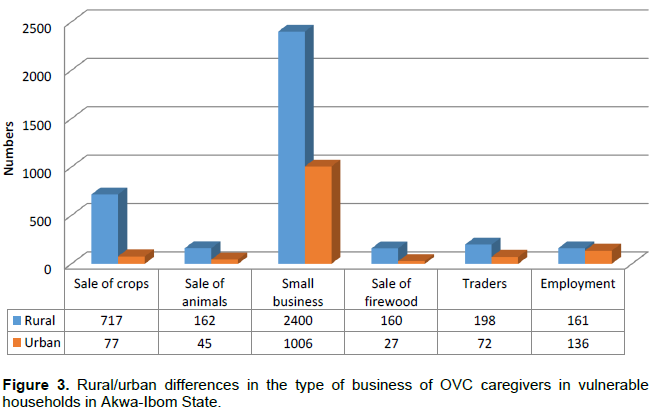 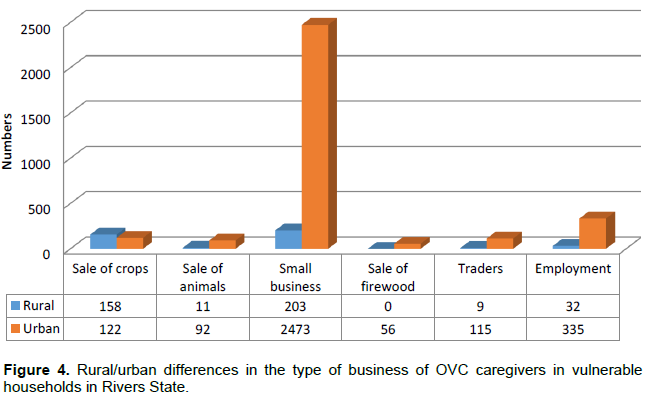 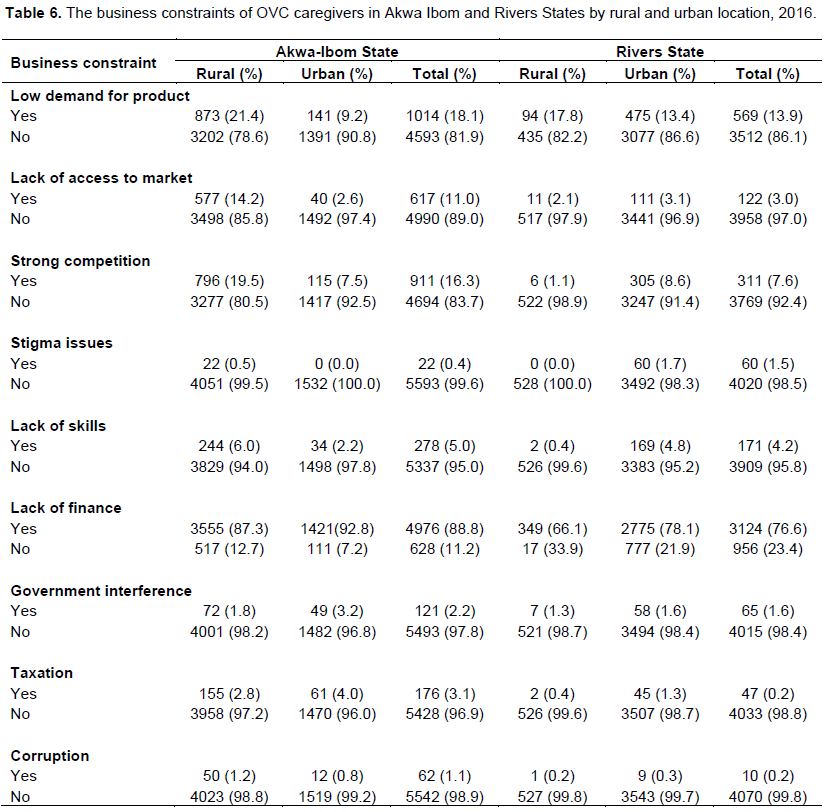 Also,in Rivers state, more than two-thirds of the living in the rural areas and 20.2% of those in the urban areas did not specify any kind of business.

A sizeable proportion of respondents in this study earned below the minimum wage of 18,000 naira in Nigeria and did not have or receive any education on any income generating activities. A small proportion was aware of the need to save money but could not save because most of them did not even earn enough to meet their basic household needs. Very low proportion had received any type of educational assistance or training on types of good business and its management.
There is need to improve access to education in the rural communities which is likely to increase their awareness about business that could be lucrative. Also giving them appropriate orientation would also help them to know how  to  source  for  the  capital  to  start  up  any business of choice. It is recommended that the governments in the two states should facilitate the type and quality of education in their states to include courses in entrepreneurships and small scale empowerment programs.
The household economic strengthening program of the Association for Reproductive and Family Planning (ARFH) should support the vulnerable households in the choice of business that will reduce their poverty level but should be accompanied by appropriate training in entrepreneurship and skill acquisition.