This paper aims to examine road fatalities using a GIS approach in Trinidad in an effort to provide recommendations on how road collisions and the number of casualties can be mitigated. In order to achieve this, the paper has examined a number of maps of Trinidad. The study examined data generated from maps of Trinidad using the Arc GIS Maps 10 software. Different variables were used to manipulate the data and these were road incidents by administrative area, municipalities, population density and socio economic status in Trinidad. The data generated represented the period 2005 to 2011 from 355 locations across Trinidad. From the data analyzed, it is clear that there is a positive correlation between the number of fatalities and the economic status of an area as well as the population of the area.  From the data represented in the maps, it is clear that in regions with high population and numerous intersections such as City of San Fernando, Tunapuna, Port of Spain, San Juan, Laventille, and Diego Martin the number of road fatalities was high. The findings established in the study can allow for change in: (i) Road Traffic legislation and control measures and (ii) infrastructural redesign and implements.

Road fatalities claim a significant number of lives in Trinidad and Tobago. Collisions can be attributed to human error or natural factors (Elvik, 2009). The road network is the most widely used form of transport since it is the cheapest form of transport for both goods and passengers over short distances (E.C.D, 2001). Thus road fatalities continue to remain one of the leading causes of death worldwide as it claims millions of lives across the world (Albrecht, 2011). Road transport is estimated to cause more than 1.2 million deaths annually (WHO, 2012). The fundamental aim of the analysis is to depict the usefulness of reducing road fatalities by undertaking a GIS approach to doing so. The paper will use Trinidad as the geographic location and represent key data useful for making recommendations geared toward reducing road fatalities. The findings from the maps generated from the GIS approach will be discussed with relevant inferences and recommendations. 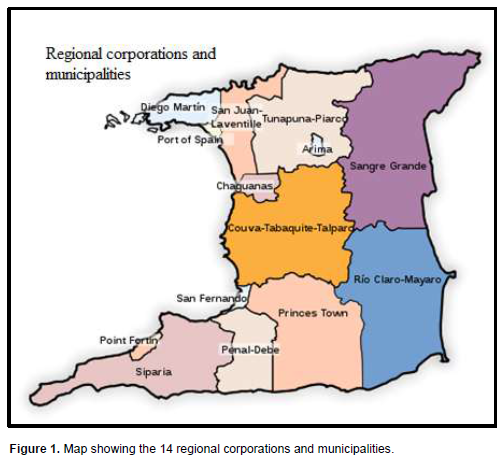 In order to determine the collision prone areas of the island, information on the locations of RTCs for the period 2000-2011 were obtained from the Central Statistical Office of Trinidad and Tobago and cross-referenced with accident reports from the Traffic and Highway Patrol Unit (Table 1). The researcher and two assistants visited each site, utilizing a handheld GIS monitor, Trimble Juno SB Outdoor Handheld GPS GIS Mapping data collector. The data were collected from 335 locations within the different Municipalities in Trinidad. The co-ordinates for each location were obtained and documented. Maps were developed using Arc GIS Maps 10. The data analyzed were collected as described above and contained information on the incidence of road fatalities. This information includes total number of road incidents and fatalities by administrative area, Municipal Corporation, population distribution and socio-economic status of the community. These factors will be used to determine the trend of collisions using Geographic Information Systems (GIS). 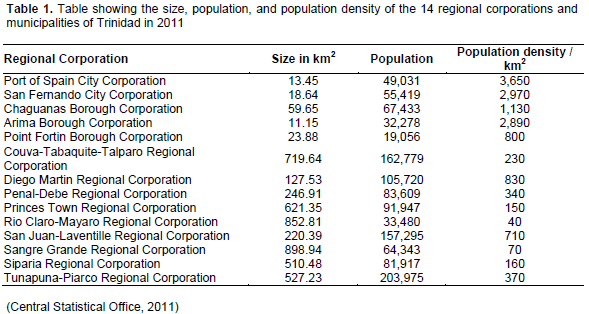 The results from the research is divided into different subsections as it relates to the administrative areas, municipalities and population distribution using the GIS approach in Trinidad.
Total number of fatalities by administrative area
The map shown demonstrates the areas prone to collisions in different administrative regions (Figure 2).
From the map above, it is clear that the following regions that are prone to higher road traffic fatalities are Saint George, San Fernando, and Caroni administrative areas. In contrast, the Northern and Southern sections of the map have minimal collisions. This indicates that the areas that are more prone, have a higher number of road traffic casualties. On the other hand, areas less prone to collisions have few casualties.  It can also be assumed that the number of vehicles in the high prone collision areas is higher as compared to the lower prone areas. This leads to an increase in the number of casualties due to collisions in the high prone areas. 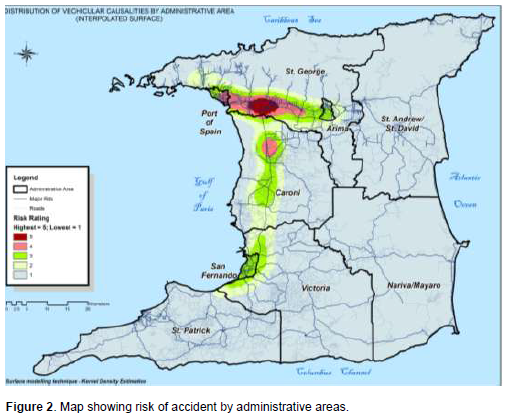 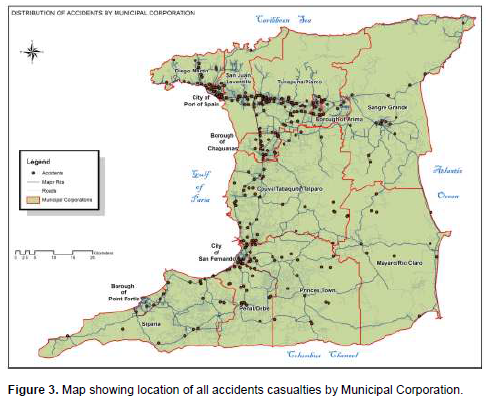 The Arc GIS 10 Map in Figure 4 shows the distribution of vehicular casualties and the population distribution. It can be seen that in regions with low population density that is 0 to 1500 people and 1501 to 3000 people, the number of collisions are low. Only a few collisions have been noted in the 0 – 1500 people region. This is especially in the Northern and Southern regions of the map. The number of vehicular collisions is greatly concentrated in regions with populations of 6001 – 10000 people and 10001 and 20000 people. This indicates that collisions are prevalent in the regions that are densely populated. 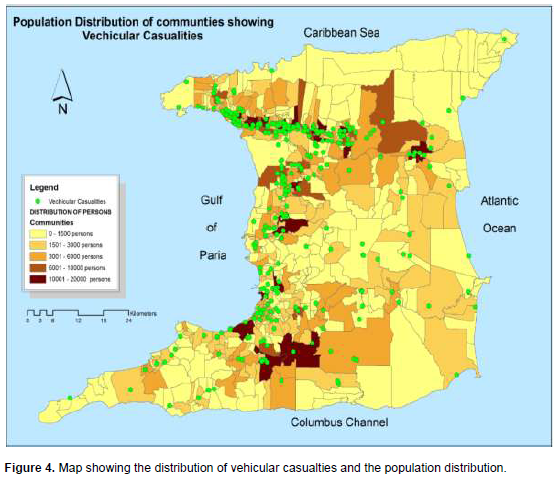 Socio-Economic status of community
The map in Figure 5 shows the distribution of vehicular casualties and the socio-economic status of the communities. The map illustrates the regions with poor, lower and lower middle class communities the numbers of collisions are low. This is especially in the north eastern and south eastern regions of the map. The number of vehicular collisions is greatly concentrated in regions where middle class, upper middle class and upper class individuals. This is frequent for the regions that have upper class individuals. This indicates that collisions are prevalent in the regions where the population is of better socio economic status. 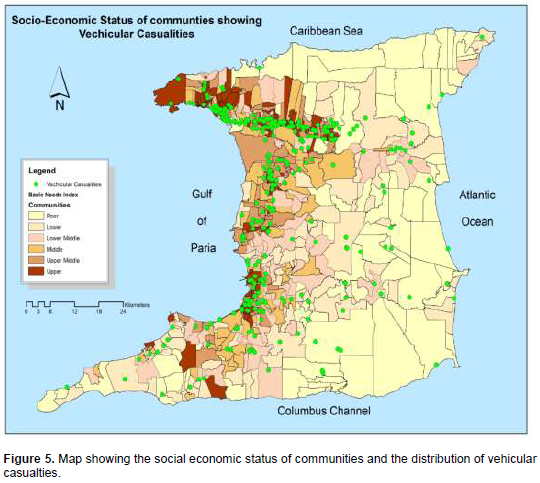 The representation of geographical data assists with planning, monitoring and program design in terms of geographic location. The paper shows how data and statistical representation can easily be depicted via the use of maps to illustrate exactly where were prone to road fatalities and areas of high incidence. The analysis focused on how a GIS approach can be used to track and monitor road fatalities with the aim of reducing its incidence rate. The  findings  were  represented  in  maps generated using the Arc GIS 10 mapping software and contains key information pertinent that can be used to for program design and implementation to road traffic laws and regulations as well as communication campaigns. The data informs public health and program designers of the geographical areas that focus should be concentrated. The maps represented data on road fatalities based on municipalities, population density and socio-economic status. These factors can help devise ways to reduce road fatalities based on geographic findings and inferences.