Effect of seasonal changes on the quantity of phytochemicals in the leaves of three medicinal plants from Limpopo province, South Africa 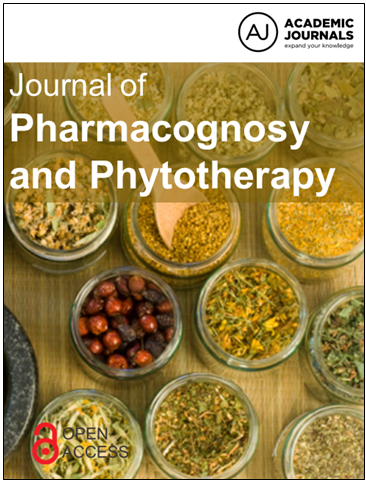 World-wide, medicinal plants continue to be relied upon as solutions to health problems (Verma and Singh, 2008). In South Africa, over sixty percent of the rural black population still relies on medicinal plants infusions (herbal teas) and concoctions administered by traditional healers for their health problems in preference to/or concurrently with conventional synthetic drugs (Van Wyk et  al., 1997). This rural dependence on medicinal plants is encouraged by several factors including: the lower cost of medicinal herbs compared to conventional synthetic drugs, efficacy and accessibility of herbal remedies, as well as their associated lower side effects compared with synthetic drugs (Motamedi et al., 2010).
Medicinal plants synthesize a number of biological constituents that are needed for the plant’s survival and its protection against predators and insects. Such biological constituents needed for the survival of plants are referred to as secondary metabolites or phyto-chemicals. The secondary metabolites are an extremely diverse group of compounds not only chemically but also in their functions where they are commonly used in agriculture and drug discovery (Yadav and Agarwala, 2011). Phytochemicals such as alkaloids, flavonoids, saponins and tannins are known to have a definite physiological effect on the human body that include antioxidant, antibacterial, anti-cancer and anti-inflammatory activities (Craig, 1999).
Phytochemical composition of medicinal plants is known to be affected by a number of environmental factors including altitude, soil type and change of season (Nchabeleng et al., 2012; Jayanthy et al., 2013; Odjegba and Alokolaro, 2013). Effect of seasonal changes on the formation of plant secondary metabolites is influenced by responses to a variety of season specific pathogens (Figueiredo et al., 2008). This effect affords plants, unlike other organisms, to survive different seasonal conditions without hibernation. Seasonal changes expose plants to different temperature levels (including extreme levels) that have an effect in their phytochemical compositions, with volatile compounds being the most affected (Usano-Alemany et al., 2014). Determination of the seasonal effect on plant phytochemical compositions provides knowledge on the time/season of harvest of individual plant species that afford optimum concentration of active ingredients (Kale, 2010).
The leaves of the three medicinal plants; Barleria dinteri, Grewia flava and Jatropha lagarinthoides, are widely used in the Limpopo province of South Africa in traditional medicine for treatment of microbial infections, intestinal tumors and stomach cramps (Gololo, personal communication). Preliminary analyses in our laboratory have revealed that the leaves of the three medicinal plants possess important phytochemicals such as alkaloids, flavonoids, saponins and tannins. The leaves of these plants are collected throughout the year for medicinal usage. In South Africa, four seasons with different rainfall patterns and average temperatures are found within a year, namely: autumn, winter, spring and summer. However, there is lack of information on the effect that changes of seasons have on the quantity of the inherent phytochemicals of the three medicinal plants under current study. This information will be important in the determination of the suitable harvesting season of the three medicinal plants for usage in traditional medicine. 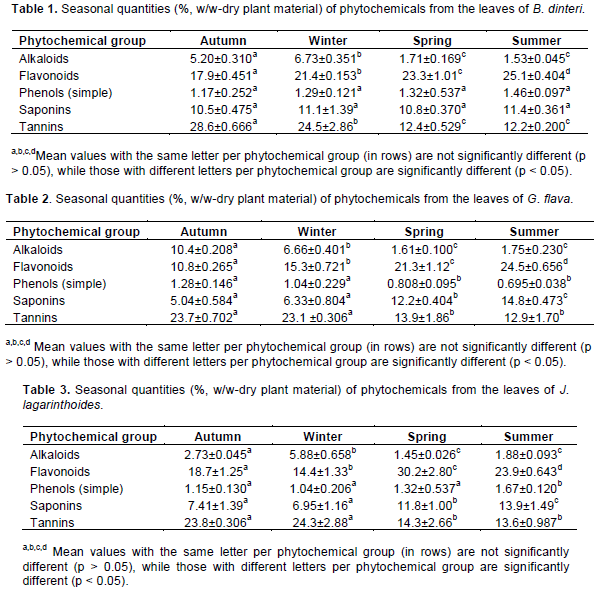 Determination of the effect of seasonal changes on the quantity of plants phytochemicals is an important step to establish the suitable harvesting season with high amounts of phytochemicals. The dose dependent biological activities of medicinal plants have been reported before (Dilipkumar et al., 2011; Moyo and Mukanganyama, 2015). The results of the current study showed a variation in the seasonal quantities of phytochemicals of the three medicinal plants investigated. The results also indicate that medicinal plants may have high accumulation of different phytochemicals during different seasons, as seen in the case of alkaloids and tannins been accumulated in high amounts during colder seasons while flavonoids were accumulated in high amounts during warmer seasons for all medicinal plants under current study.
The results of the current study are in agreement with the findings of the previous studies, although with different plant species. In this regard, the leaves of Barleria prionitis, Boerhavia diffusa, Citrillus colocynthis and Grewia tenax were reported to have different yields of total alkaloids and polyphenols in different seasons, with the Indian summer (April-June) showing the highest yield compared to winter (December-February) and rainy season (July-September) (Sahoo et al., 2012). In a separate study, total alkaloids and polyphenols were high during summer season in Convoliulus microphyllus, whereas the same phytochemical groups were high during winter in Datura metel (Kale, 2010). The differences in the seasonal phytochemical quantities of the leaves of medicinal plants were earlier reported to cause seasonal variation in their biological activities (Ncube et al., 2011). The four seasons during which plant samples were collected are characterised by different average temperatures and rainfall patterns. These environmental factors are already reported to have an effect on the quantities of phytochemicals in certain plants (Kale, 2010; Usano-Alemany et al., 2014).

With the findings of the current study, it could be concluded that the leaves of the three medicinal plants: B. dinteri, G. flava and J. lagarinthoides possess important phytochemicals whose quantity differs with seasonal changes. Since different phytochemicals possess different biological activities and they are accumulated in high amounts during different seasons, therefore one plant species may be harvested during different seasons (depending on availability) for treatment of different diseases. There is however, a need to use analytical techniques such as high performance liquid chromatography to supplement the data obtained in this study using standard methods.

The authors would like to acknowledge Dr. Eagan Bronwyn for assistance with identification of plant species and the Department of Biochemistry at Sefako Makgatho Health Sciences University for facilities to carry out the study.