The problem of heavy metal toxicity is a burning issue all over the world and more prominent in countries like Pakistan, India and Bangladesh. Often times, it is seen that the people of the affected areas are unaware of the toxic effects of these metals. Medical practitioners at the same time did not investigate the presence of heavy metals in the body. The present study aims to analyze the concentration of toxic heavy metals in different body fluids and their correlation with other medical investigations. The amounts of heavy metals viz Cu, Pb, Mn and Ni in random patients suffering from liver, kidney and heart diseases of Mayo Hospital Lahore have been investigated with the help of flame atomic absorption spectrophotometer. The routine medical tests and treatment was performed in the same hospital while the analysis of heavy metals was done in GC University Lahore. The values of selected heavy metals are high in patients as compared to their allowed or standard values. The value of Mn was between 0.36 to 24.16 ppm, for Pb the values were between 2.10 to 24.79 ppm, for Ni it was 2.33 to 243.59 ppm and for Cu the values of these were between 3.10 to 18.83 ppm. All these values were much greater than the allowed limits.

There are a number of metals which are present in the upper surface of earth in different concentration, depending on human activities (Karita et al., 2005) like mining, erosion of soil, industrial effluents, sewage water and pesticides (Sthoset et al., 1977; Cambra et al., 1999) and crops grown with polluted water (Qadir et al., 2000). These heavy metals disturb the body’s antioxidant properties and reactive oxygen species (ROS’s) are formed by the partly reduction of oxygen which ultimately damages the cell by clasping the protein structure, degradation of DNA and RNA, oxidation of bodily lipids and inhibiting the protein synthesis (Navas et al., 2005; Gutteridge, 1995). Researches have shown that the presence of lead creates faults in nerve cells, low intelligence level and abnormal mental and physical up bringing (Prozialeck et al., 2006). Pregnant and feeding women can expose their baby to lead poisoning more easily than adults (Lanerolla et al., 2007). Dermatology problems are mostly related to nickel, the most reported case is allergic effects of nickel and the most common source is ornaments that mainly contain nickel blended with other metals (Yearout et al., 2008). The excessive amounts of Cu in body can result to stomach pain, burning sensation, blue vomits, pain in abdominal cavity, diarrhea, bluish urine, baldness, anemia, difficulty in paying attention, anxiety, insomnia and cardiovascular diseases (Flora et al., 2007). Manganese stops the transportation of calcium and decrease the concentration of dopamine which causes Parkinson’s disease (Goeringa, 2007). Cu and Fe are essential need of the body during the synthesis of organometallic proteins but when taken in large amounts they result in the malfunctioning of body systems, settle down in the neurological system and create severe inflammatory diseases (Lopez et al., 2006) and cancer (Ibrahim et al., 2006; IARC, 1987; Jarup, 2003). Manganese stops the transportation of calcium and decrease the concentration of dopamine which causes Parkinson disease (Goeringa, 2007). It was noticed that the population of Pakistan is facing the problem of metal toxicity. Reports have been published which showed that the water of Lahore is extensively polluted with toxic heavy metals like Cu, Ni, Cd, Pb, Hg. Zn, As and many others (Azeem, 2009). Even then there is no data available for the correlation of heavy metals with the patients of Lahore. So, for the first time we conducted this study and focused on four metals Cu, Ni Mn and Pb for their relationship with different metabolic disorders among the general patients. This study can be related to forensics for the solution of cases, to medicinal science for finding the causes of diseases, and to the environmental agencies to study the effects of contamination.

This experiment has two parts:

A. Clinical study of patients.

B. Chemical analysis of toxic metals

First part of this experiment was to investigate medically the patients, cure them and perform the routine medical examinations. This was done in the clinical labs of Mayo Hospital and King Edward Medical University Lahore. The second part was to find the heavy metals quantitatively in the samples of the selected patients and co-relate the heavy metals with the condition of patient. The following are the steps for heavy metal estimation and correlation.

About 3 ml whole blood sample of the patients was taken with the help of sterile 5 ml injection needles through ordinary venipuncture for most of the cases, and for only a few cases it was done through arterial puncturing method. Out of these 3 ml blood sample, 2 ml of blood was sent for medical and routine clinical tests like liver function tests (LFTs), renal function test (RFTs) etc. and 1 ml whole blood sample was collected in sterile 3 ml EDTA tubes. These tubes were numbered as 1, 2, 3…., to each number a specific bed, patient and doctor was assigned and noted down. Necessary information about the patient like name, age, gender and mobile number was taken on the spot. Before taking the sample, the patient and attendants of the patients were taken into confidence about the privacy of their personal as well as clinical data and were told about the purpose of the sampling and the importance of heavy metals. The samples were stored in freezer at 4°C until digestion. Digestion of the samples was done by following the method of Kazi et al. (2007) as follows:

All the glassware was washed by liquid vim, marks of blackening and charring from the lower surfaces of beakers or conical flasks were removed with the help of a soft but thick brush that could be inserted into the neck of the apparatus. The apparatus was then washed thrice with 6 N analytical grade nitric acid, rinsed with distilled and doubly distilled water. The glassware was air dried after washing for 24 h in locked cabinets to avoid any contamination.

As the samples have been placed into the freezer, they were in frozen form and to take them back into the liquid state, they were gently heated on hotplate in 80 to 85°C hot water for 5 to 10 min. After this small heating, the samples were in liquid or molten form.

Exactly 1 ml of the whole blood sample was taken into the conical flask with 5 ml mixture of nitric acid and hydrogen peroxide (2:1) added into it and allowed to stand for 30 min in dark after covering the flask. After this, samples were taken out from the dark room and placed on the hot plate at 60°C for about 2 h. 2 ml of nitric acid and 0.5 ml of H2O2 was added to ensure maximum digestion of the metals ions. When a solid like mass was retained, the sample was made to 10 ml using 0.1 M nitric acid, placed into test tubes and covered. The controls were also prepared by using the same conditions and minus one formula. After the digestion of samples they were analyzed on Shimadzu flame atomic absorption spectrophotometer using Hallow Cathode Lamp of respective metals. To construct accurate calibration curve the reference standards of 0, 0.5, 1, 2 and 4 ppm of each metal were prepared by using dilution formula from the original standard having 1000 ppm concentration that were obtained from Shimadzu company.

The clinical investigations and medical reports were written by the Staff of Mayo Hospital Lahore using ordinary medical techniques and were grouped on the basis of similar nature of disease as follows:

After the completion of heavy metals examination in the samples, all the records of heavy metals concentration was noted. The Medical Charts of the studied patients were retrieved from the North Medical Ward Mayo Hospital with the help of the hospital staff. Symptoms and the lab reports of liver function tests (LFTs), renal function tests (RFTs) and other were noted. The data of 60 patients was studied in 6 groups, on the basis of similar nature of disease. The results of heavy metal concentration were noted in mg/L or ppm. Mean values of heavy metal concentration were noted in each class of disease. The reference ranges of certain parameters are given in Table 1 (The Great Plains Laboratory). The results showed that the mean value of Mn in the patients suffering from chronic liver diseases was 2.11 ppm which is much greater than the tolerable levels in the human body. Pb and Ni were also high, which may cause liver disease (Figure 1). These metals have been reported as sources of chronic liver diseases (Gil et al., 2000; Eyre et al., 2004). Again the level of Lead was so high in the patient of CRF and it may be a possible factor towards maturation and strengthening of the disease. The levels of Cu are very high in this patient which has been reported as a factor of chronic renal failure (Fakhfakh et al., 2003). Figure 2 shows the general trend average levels of heavy metals with CRF diseases. It shows that the Cu levels are highly toxic but the levels of Pb are in low range. Figure 3 show levels of heavy metals in the cardiac failure (CCF) patients. According to the figure Ni is highest in these patients. Cu is lowest and Pb is in the middle. The levels of Pb were high in patients, which has been reported as a cofactor towards CCF disease, Cu have been reported to cause cardiovascular disease (Rout 2003). Ni is very high in the patients having blood in their gestro intestinal tract due to problems in the digestive system. Cu has been reported as a factor towards GI bleeding (Shaiq et al., 2012). Figure 5 represents the general trend of heavy metals in the CVA patients. Cu is highest and Mn is lowest in these patients. 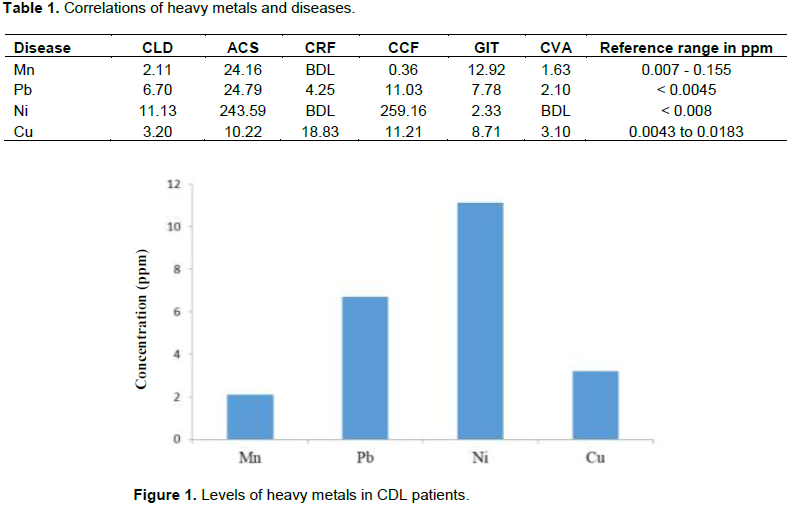 From Table 1 data, it is clear that the levels of heavy metals were higher in patients than the allowed levels. The allowed levels of all these four metals are in ppb while in this study all metals are found in ppm, implying that they are approximately 1000 times high in people. The need of the hour is to investigate the levels of heavy metals along with the routine medical examination and after that there should be complete “Chelation therapy” for metals (Sharma and Sharma, 2014). Figure 6 shows that the level of Ni in CCF patient was highest and next to it was ACS diseases. However the levels of Nickel corresponded with BDL and CVA patients. The levels of lead, copper and manganese were also very high than the allowed limits. 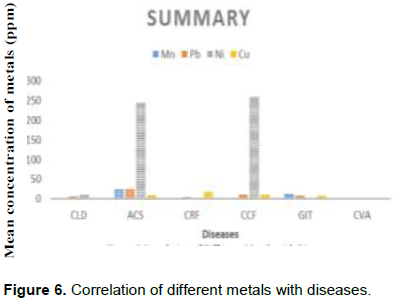 The authors are thankful to Laboratory Staff, Mr Riasat Ali, Organo Pharmaceutical Chemistry, Department of Chemistry GC University Lahore, Paramedical Staff of Norht Medical Ward for their help in keeping and collection of blood samples. We are also thankful to Dr Zohaib for his support for the collection of medical charts of the patients.