Assessment of heavy metals and estimation of human health risk in Tilapia fish from Naik Lake of Nagpur, India

During the past few years, toxic metal contamination increased in lakes due to anthropogenic activities (Canli and Atli, 2003; Wang et al., 2010). Heavy metals are transferred into sediments, phytoplankton, zooplankton, aquatic weed and fish and ultimately to human beings (Ikem and Egiebor, 2005). Fish is an important food source for humans and contain high levels of protein and omega-3 fatty acids, amino acids, vitamins and minerals like Ca, Fe, Cu and Zn (Aremu and Ekunode, 2008). Tilapia fish is common among all species of freshwater fish and most–suitable for farming in large quantity. Tilapia is considered the most traded fish worldwide (Kevin, 2008). Heavy metals contamination in ï¬sh is now global concern. Heavy metal contamination is not only threat to ï¬sh but also pose human health risks due to ï¬sh consumption.

This study focuses on Naik lake located in Nagpur city of central India. Human activities in the vicinity of Naik lake contributing to pollution such as domestic sewage, idol immersion and waste discharge. These activities resulted into total degradation of  the  lake  system  (Zade and Sitre, 2012). Human population is at risk of heavy metal pollution when fish is ingested from Naik lake. Therefore, evaluation of health risk from consumption of fish is essential. The aim of the study was to assess the selected heavy metals (Zn, Pb, Cu, Ni, Cd) in gills and muscles of the tilapia fish from Naik lake. The other important aim of the study is to determine the health risks of selected heavy metals due to the consumption of tilapia fish. The target hazard quotient (THQ) is used for estimation of health risks from the consumption of fish.

Naik lake is a natural freshwater ecosystem in Nagpur city, India (Figure 1), situated at latitude of 21°9'43"N and longitude 79°6'44"E in a densely populated area of Nagpur, India where fishing is carried out. 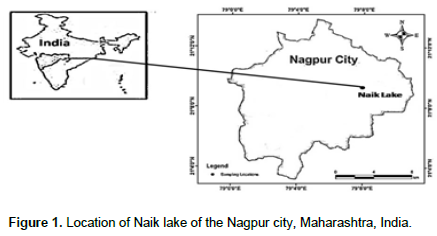 Tilapia (Oreochromis mossambicus) fish samples were collected from Naik lake in Nagpur, India using a drag net. Mean total lengths and total weights of fish samples were measured 19.83±3.21cm and 64.28±4.87g respectively. Fish samples were washed using ion free water and kept in clean isolated polyethylene bags. Samples were placed on ice immediately and taken to the laboratory, where they were deep frozen at −20°C until when they were prepared for digestion and analysis.

Fish samples preparation and heavy metal analysis of by ICP-OES

Heavy metals such as Zn, Pb, Cu, Ni and Cd were selected for the study. Samples were digested and analyzed using inductively coupled plasma  optical  emission  spectrometry  (ICP-OES)  Perkin Elmer, Optima 4100DV according to the method reported in USDA (2008). All glasswares were rinsed using ion free water for the analysis. Fish samples were thawed to room temperature and boneless muscles and gills were removed from the fish with sterilized surgical blades and scissors. Fish samples were then oven dried at 80°C in acid washed petri dishes up to a constant weight for 48 h. Fish samples were kept in desiccators for cooling. The removed fish muscle and gills were then homogenized with mortar and pestle and ground to a fine powder. Moisture content was calculated for individual fish samples. A 0.5 g of fine powdered muscle and gill material of each sample was digested in triplicate using closed-vessel microwave digestion, Milestone model Start D, Italy. Fish muscles and gills digested in nitric acid, were subjected to a four steps microwave digestion program (Table 1). 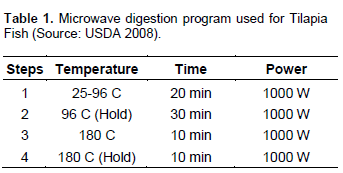 After digestion, 2 ml of 30% hydrogen peroxide was added to digests to reduce vapours of nitric acid and accelerate the organic substance digestion by increasing the temperature (Dig-Acids, 2001).  Blanks were prepared for the authentic estimation of analysis. The digested fish samples were diluted with 50 ml ion-free water in acid washed standard flasks and each fish sample filtered through 0.45 μm Whatman filter paper (Millipore, Germany). Digests were determined using ICP-OES for all selected heavy metals and operational parameter settings were applied for the Perkin Elmer, Optima 4100DV were given in Table 2.

Multi-elemental standard solution (Merck) were used for the standardization and prepared by diluting stock solutions of 1000 mg/L (Mohammad et al., 2013). The certified standard reference material for fish (SRM 2976) from the National Institute of Standards and Technology, USA (NIST) was used and recoveries of the selected heavy metals ranged from 93 to 101 ±1-7 % of the certified values (Table 3). The levels of heavy metals in fish were expressed as µg/g dry weight (dw).

Where, THQ is the Target Hazard Quotient; EFr is the Exposure Frequency (365 days/year); ED is the Exposure duration (64.19 year); equivalent to the overall life expectancy in India (United Nations Department of Economic and Social Affairs, 2011); FiR is the Fish ingestion rate (9g/day/Indian person) (Bajaj, 2011); C is the Concentration of metal in the muscle of ï¬sh (µg/g). RfDs is the Oral reference doses (USEPA, 2000); WaB is the average body weight (65 kg) (ICMR, 2009) and TA is the average exposure time for non-carcinogens (365 days/year).

To determine the allowable daily consumption rate of Tilapia fish of Naik lake, equation (2) was applied. Unit was expressed in kg/day.

The allowable weekly and monthly consumption rates (CR wm   and CR mm) were estimated using equations 3 and 4 below, and expressed in kg/week and kg/month respectively. 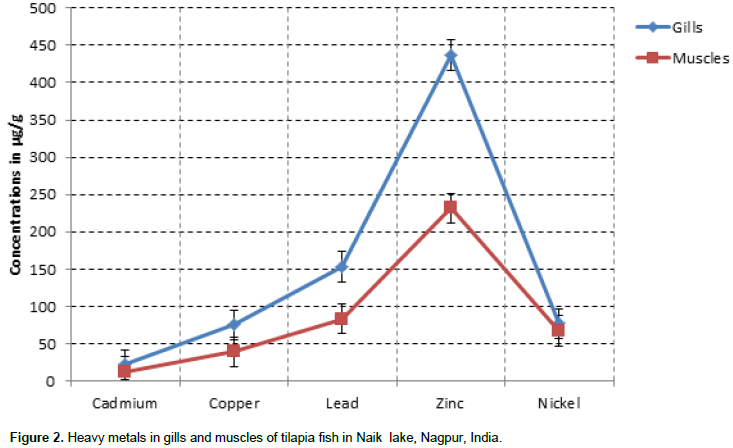 Similarly, Kumar et al. (2011) and Giripunje et al. (2014) reported low concentrations of cadmium in fish of lakes. In comparison with other study lake of Nagpur city, the highest Cd concentration 13±0.21µg/g dw in muscles from the present study lake was approximately 92 to 144 times higher than concentrations reported by Giripunje (2014) (0.09±0.33 to 0.14±0.51 µg/g ww, in Futala, Gandhisagar and Ambazari lakes).From Figure 2, it is clear that lead and cadmium exceeded the maximum permissible limits of FAO/WHO. This may be due to the fact that the high amount of heavy metal contaminated waste water discharged in Naik lake than other lakes in the city.

In India, fish is one of the most important food sources because of its low cost and high nutritional values. However, water bodies in India are facing tremendous problem of contamination by toxic elements. This is considered a great concern due to the human health risk these elements pose.  Inhabitants may consume toxic metals with the potential to affect their health. The potential health risk from Tilapia fish consumption posed by Zn, Pb, Cu, Ni and Cd are shown in Table 5. 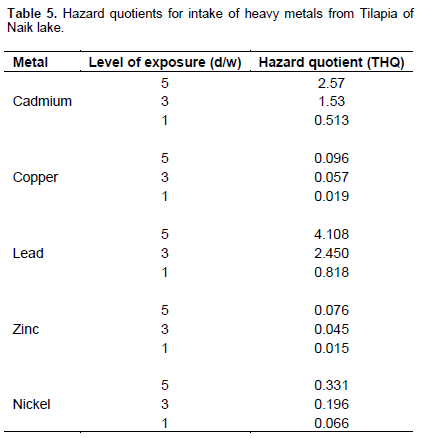 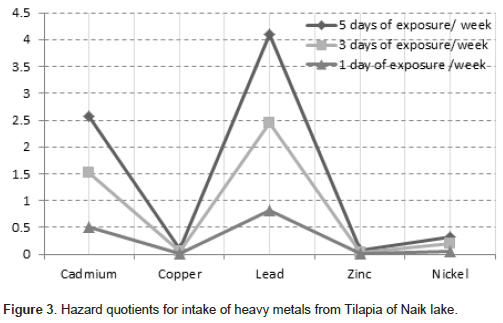 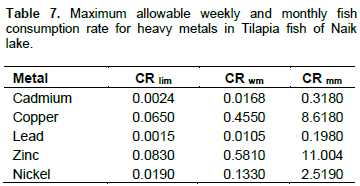 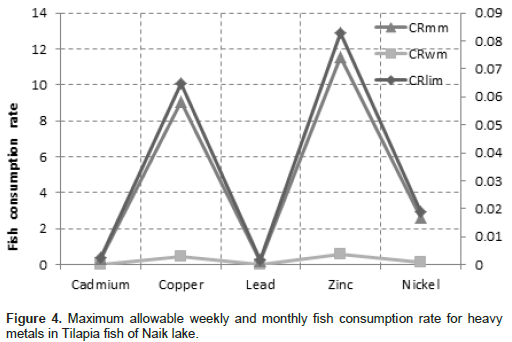 The edible part (that is, muscles) is the most important part of fish in the view of ingestion.  Muscles of tilapia fish of Naik lake showed high concentrations of lead and cadmium above maximum permissible limits recommended by FAO/WHO (1999), and therefore suggest that these fish should not be consumed.  The THQ values for copper, zinc and nickel indicated no risk from tilapia fish consumption for five times per week or less. Lead and cadmium showed lowest allowable consumption rates. The THQ values for lead and cadmium indicated high risk from tilapia fish consumption for most of the health risks related to fish originate in the aquatic environment. Therefore, regular and long-term assessment of heavy metals in fish in Naik lake must be conducted to assure food safety. This study serves as an initiative step to highlight the high need of remediation of heavy metals from Naik lake in the view of aquatic environment and food safety for inhabitants. The authors also suggest the need for a medical investigations and proper interventions for inhabitants.