Increasing air pollution levels due to rapid urbanization and growth in infrastructural facilities coupled with low level of standard safety procedures have been observed in Nigeria, and become a major source of concern. The study evaluated the effects of occupational exposure to metal dust on the liver of road construction workers in Abuja metropolis. Blood samples were used in the measurement of Lead, cadmium, magnesium and iron as indicators for metal toxicity. Bilirubin, liver enzymes (aspartate aminotransferase (AST), alanine aminotransferase (ALT), alkaline phosphatise (ALP)) and proteins as biomarkers for liver function. Samples were collected from different road construction sites. One hundred (n = 100) subjects were recruited and served as the exposed group and another one hundred (n = 100) control as unexposed (control) group. Samples were analyzed using Atomic Absorption Spectrometry for the toxic metals (Lead and Cadmium) and trace elements (Magnesium and Iron); and Selectra ProS Clinical Chemistry Auto Analyzer for the liver function tests respectively. This study showed a statistically significant increase in Lead, Magnesium and Iron (p<0.001) when exposed subjects were compared with unexposed subjects. Test for liver function showed a significant reduction in total bilirubin (p<0.01) and direct bilirubin (p<0.05) respectively. Albumin also show statistically significant increase (p<0.05) on comparison of exposed and unexposed subjects. This study indicates the presence of metal dust in road construction workers occupationally exposed, and suggestive of liver impairment following continued exposure to these toxic metals and trace elements.

Pollution of the ecosystem by heavy metals is a global problem because these metals are not easily destructible and most of them have harmful effects on living organisms (Shinggu et al., 2010). About 4 to 8% of deaths occurring annually in the world are associated to air pollution related with anthropogenic activities (Lopez et al., 2005). Environmental source of air pollutants can be inorganic, organic or both. Among the inorganic pollutants originating from construction site activities, heavy metals such as lead (Pb), cadmium (Cd) are of major concern due to their harmful and potential carcinogenic characteristics. In dusty environment, it has been established that an adult could inhale about 100 mg dust per day (Leung et al., 2008). Exposure to high levels of heavy metals can result to acute and chronic toxicity, such as damage to the central and peripheral nervous system, immune system, lungs, kidneys, blood composition, liver and even death.
Respirable fraction of heavy metal dust is composed of very fine dust which is able to reach the lower bronchioles and alveolar region of the lung. It has been reported that heavy metals absorbed in respirable dust suspended particulates produces tissue damage of the lungs (Pope et al., 1995). The health effects of toxic metals in the air and from road deposited dust on humans is better appreciated if one considers the fact that an active person typically inhales 10,000 to 20,000 L of air per day (Gbadebo and Bankole, 2007). During inhalation, these heavy metals may enter alveolar sacs deep inside the lungs and also blood stream thereby affecting vital organs such as the liver, kidney, etc (Gbadebo and Bankole, 2007). Air is very essential for human existence. Abuja the federal capital territory of the federal government of Nigeria like any other fast growing city in the world is witnessing yearly influx of residents who are coming to seek greener pasture, and because most of the new residents have no formal education and good technical training, coupled with the alarming unemployment rate, they end up doing any job which include road construction. Although urbanization can offer opportunities for improvements in human health (e.g., better access to health care and some amenities such as good roads, clean city), it can also result in environmental degradation (Gong et al., 2012). Roads play a vital role in inducing social and economic processes (Bai et al , 2009). Not much data is available on adverse effects of toxic metal dust in construction sites in Abuja. This study will attempt to generate and evaluate the level of some of these metals (pb, cd, fe and mg) in the blood and also ascertain if they have any effect on the liver and subsequently use the data to advise appropriate management on how best to protect workers and residents living around road construction sites.

Study area
This study was carried out in the metropolitan city of Abuja, Federal Capital Territory (FCT), located in the North central geopolitical zone of Nigeria. Abuja which was founded in 1828 has a coordinate of 9°4’N 7°29’E and a land mass of 713 km². It has a population of 979,876 according to the 2006 National population census (Anang, 2011) (Figure 1). 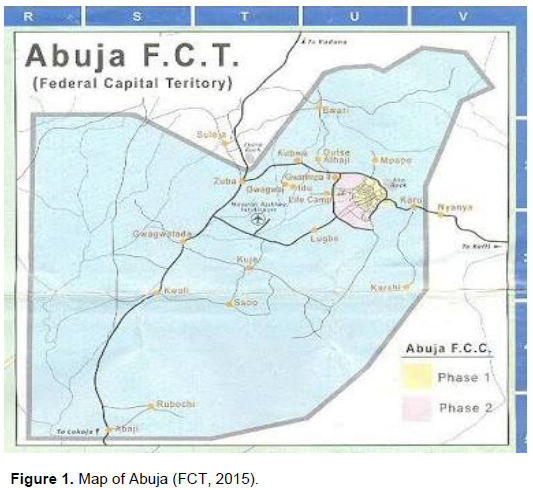 Study population/subjects
A total of two hundred (200) apparently healthy men comprising of 100 occupationally exposed whom have worked for a minimum of five years, above 18 years of age and with no serious health challenge in recent years and willing to participate in the study and 100 non exposed men who are above 18 years of age, and not have been exposed to metal dust and also apparently healthy without any serious health challenge in recent years, were recruited for this study after obtaining informed consent and ethical approval from the Health Research Ethics Committee of the FCT Administration, Abuja.
Biochemical measurements
The blood level of the metals were analyzed using Atomic Absorption Spectrometry method (Jackson and Chen, 1996) while the liver profile was analyzed using Selectra ProS, a Clinical Chemistry Auto Analyzer made in Holland that operates Beer-Lambert Principle (Harris, 1995).
Statistical analysis
Statistical analysis including descriptive statistics was carried out using the Statistical Package for Social Sciences (SPSS). Values were expressed as mean ± standard error of the mean. The paired t-test was used to determine significant differences and the p-value was set at p< 0.001.

The results obtained from this study are indicated in Tables 1 and 2. Occupational exposure to metal dust mostly Lead is one of the most prevalent overexposures in road construction sites. Industries with high potential exposure apart from road construction include other forms of construction, smelter operations, radiator repairs and firing ranges. Table 1 shows magnesium level of the exposed group to be significantly (p<0.001) increased when compared with unexposed subjects, also exceeding the upper limit of the reference range (0.66 to 1.07 mmol/L). Magnesium is a major intracellular cation for normal neuromuscular activity. Intracellular magnesium is an important cofactor for various enzymes, transporters and nucleic acids necessary for normal cellular function, replication and energy metabolism (Bringhurst et al., 2012). Fifty percent of total body magnesium resides in bone, while almost all extra skeletal magnesium is located inside the cells. Although serum magnesium levels have been argue not represent total body magnesium levels because on 1% of body magnesium in found in the extracellular fluid (Bringhurst et al., 2012), the levels exceeding 2 mmol/L are reported to cause vasodilation and neuromuscular blockage (Bringhurst et al., 2012). Mean magnesium levels in this study exceeded 2 mmol/L indicates occupational exposed subject could be prone to neuromuscular blockage. 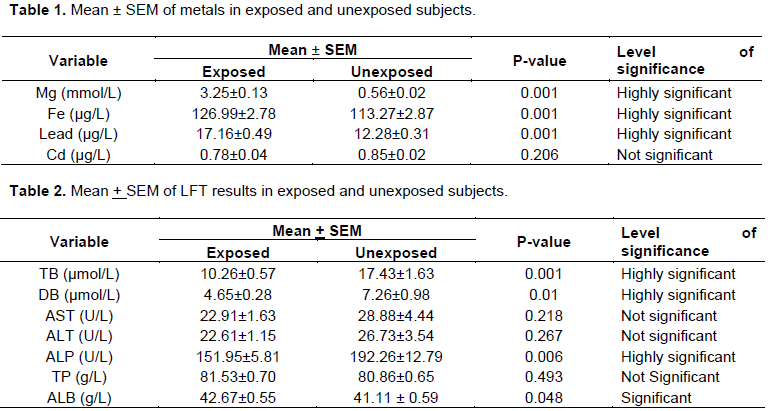 Lead serves no useful purpose in the human body, with its presence leading to toxic effects, affecting every organ. Lead has the ability to mimic the action of calcium, affecting calcium dependant or related processes; and interact with proteins (including sulfhydryl, anime, phosphate and carboxyl groups) (ATSDR, 2005). Significant (p<0.001) increased lead levels in the exposed subjects than unexposed subjects was observed which could have resulted from constant exposure to the  exhaust fumes of motor vehicles powered by tetraethyl lead and from the dust raised by tilling the surface of earth (Barbosa et al., 2005) as inhalation is a major source of lead absorption. Neurological and behavioural effects have been documented in lead-exposed workers (ATSDR, 2005), such effects includes; decreased libido, depression, mood changes, and headache, diminished hand dexterity, diminished cognitive performance, increased nervousness etc (ATSDR, 2005).
Cadmium levels in exposed subjects have no significant (p>0.05) difference with the unexposed subject suggesting that cadmium toxicity is mostly associated with exposure to paint and paint derived products. Iron is an essential metal for the body. While excess iron accumulation causes organ dysfunction through the production of reactive oxygen species, there is a sophisticated balance in body iron metabolism of storage and transport, which is regulated by several factors including the newly identified peptide hepcidin. As there is no passive excretory mechanism of iron, iron is easily accumulated when exogenous iron is loaded by hereditary factors, repeated transfusions, and other diseased conditions. This study reveals a significantly (p<0.001) increased iron level in exposed subjects when compared with unexposed subjects, though, this increase did not exceed physiological limits of serum iron (65 to 176 µg/dL).
Bilirubin is not only a waste end-product but also an antioxidant that may protect against diseases associated with oxidative stress (Schwertner and Vítek, 2008). Bilirubin is known to be associated with decrease in cardiovascular risk in men (Ollinger et al., 2005). Total and direct bilirubin reduced significantly p<0.001 and p<0.01 respectively in exposed subjects when compared with unexposed subject and could be suggestive of the high amount of lead in the exposed group which interferes with the production of bilirubin (Balistri et al., 1980).  In several prospective studies, an inverse relationship has been reported between bilirubin cardiovascular disease (CVD) (Ganotakis et al., 2007) coronary heart disease, myocardial infarction, ischemic heart disease, and all-cause and cancer mortality in men (Heejin et al., 2009). In a recent cross-sectional study, it was shown that total bilirubin and stroke prevalence have an inverse association in the representative national data in which higher bilirubin level was not only associated with reduced stroke prevalence but also associated with favorable stroke outcomes (Heejin et al., 2009). Bilirubin level in this study was however within physiological range. Alkaline phosphatase which has a direct relationship with bilirubin also is significantly decreased (p<0.006) and this could be attributed to the same effect that Lead has on bilirubin.
Albumin constitutes more than half of the total protein in the body and plays a significant role in regulating plasma oncotic pressure. Albumin was significantly increased (p<0.048) in the exposed group and this could be as a result of the reduced cadmium levels in the group.

This study has shown that there is actually a negative effect of occupational exposure to metal dust on the liver of road construction workers in Abuja metropolis. And the positive effect magnesium and iron has on the liver of the exposed group which served as a compensatory mechanism for the liver enzymes (the amino transferases). The negative effect of lead on the liver is as a result of persistent exposure to metal dust and lack of safety rules adherence. It should be noted that occupational exposure to metal dust is not avoidable but it could be reduced if workers are given adequate training on how to minimize exposure by providing personal protective equipment and ensuring compliance by the supervisors, because a healthy workforce is the greatest asset of any organization. Furthermore, occupationally exposed workers to metal dust should be provided with regular health check to enable early impairment of the liver and other organ related illness to be detected in time and initiate therapy. As a matter of great concern, the agency of government responsible for supervision and enforcement should hold construction companies without good safety policies to account, and formulate procedures where none exist.