Animals in sub-Saharan African countries are used as source of milk, meat, hides and skin where animal diseases are one of the primary constraints in increasing the productivity of food animals. Studies were conducted to examine various respiratory problems of cattle with purpose of identifying the gross and histopathological lesions in lungs of slaughtered cattle at Abergelle Export Abattoir from April 2015 to June 2015 Mekelle, Tigray, Ethiopia. A total of 240 lungs of cattle originating from different parts of Tigray regions were examined and as many as 208 lung samples with gross pulmonary lesions were collected for further confirmatory histopathological study. The prevalence of pulmonary lesions of cattle in this study was 86.6% (n=208). The case of pneumonia was found to be highest followed by lung emphysema and congestion besides cases of oedema, hydatidosis, abscess and atelectasis. These results indicated that respiratory problem is still a major health problem in cattle production.

Domestic animals in Ethiopia are mainly used as drought animals, source of milk, meat, hide and skin and as pack animals. Animal diseases are one of the primary constraints in increasing the productivity of food animals in sub-Saharan Africa (Lemma et al., 2001). Lopez (2012) stated diseases affecting the respiratory system are generally the leading causes of morbidity and mortality in large domestic animals. The management and environmental stress are often the decisive factors for the development of clinical diseases (Howard, 1993). Environmental and management stresses like over work, undue exposure to cold winds and rain, sudden change of climate, insufficient food and chronic diseases particularly trypanosomosis are responsible for respiratory diseases (Andrews and Kennedy, 1997; Dungworth, 1993). Pulmonary tissues are damaged by potential bacterial pathogens especially Pastuerella infection that normally reside in the upper respiratory tract (Carter, 1984). Even the lung tissues can be found infected with food borne parasitic zoonotic infections (Sandhu et al., 1995; Chhabra and Singla 2009). The reaction of the lung tissue may be in the form of an acute fibrinous process as in pasteurellosis, a necrotizing lesion as infection with Fusobacterium necrophonrum or as a more chronic caseous or granulomatous lesion in Mycobacterial or Mycotic infections (Radostits et al., 2007). The gross and histopathological characterization of the pulmonary disease has not yet been studied in Mekelle and around slaughter at Abergelle Export Abattoir; for this reason this study is designed with the objective to assess the major pulmonary lesion of the slaughter cattle based on lobular distribution of the infected lung and to identify as well as characterize the types of gross and histopathological lesions in lungs of cattle slaughtered at Abergelle Export Abattoir.

Study area
The study was conducted in Abergelle Export Abattoir, Mekelle. Mekelle is the capital city of Tigray Region. It is located around 780 km north of the Ethiopian capital City Addis Ababa, at a latitude and longitude of 13°29′N 39°28′E, with an elevation of 2084 m above sea level. The mean annual rainfall of the area is 628.8 mm. The annual minimum and maximum temperature is 11.8 and 29.94°C, respectively (RSTBARD, 2009).
Study type and study animals
A cross-sectional study was undertaken to establish the prevalence of gross and histopathological pulmonary lesions of cattle slaughtered at Abergelle Export Abattoir, Mekelle. The study was conducted purposively on 240 cattle subjected to slaughter from different parts of Tigray region. All cattle examined in this study were male greater than six years of age and have good body condition were apparently healthy during ante-mortem inspection.
Sample collection and processing
Immediately after slaughter, post-mortem examination was made by visual examination, palpation and incision for the presence of any lung lesion. The gross appearance, location as well as size of the lesions and observations made on incision were also recorded .Out of 240 cattle lungs examined, a total of 208 lung tissue samples with gross pulmonary lesions were collected for histopathological study. Tissue samples having a thickness of up to 2 to 3 cm were collected from every pulmonary lesion. They were taken from the margin of healthy and affected tissue parts and fixed in 10% buffered neutral formalin (BNF) immediately. Each sample was fixed separately and transported to pathology laboratory for processing. After fixing tissue samples for 24 h, all samples collected for histopathological study were dehydrated in alcohol, embedded in paraffin, sectioned at 4 to 6 µm thickness and stained with Haematoxyline - Eosin stain. The stained samples were examined using light microscope. Sample collection and processing was done as per the method described by Assegedech (2005) and Bancroft et al. (1996).
Data analysis
The data was entered into Microsoft excel spread sheet and coded appropriately. For data analysis, SPSS version 15 was used. In this data analysis, descriptive statistic was used to determine the proportion of the different respiratory lesions and their lobular distributions. Chi-square was used to test the lobular distributions of pulmonary lesions.

Pulmonary lesions
Out of the total 240 slaughtered cattle examined during the study, 208 cattle (86.6%) were found to have pulmonary lesions. On the basis of gross and microscopic examination pneumonia, pulmonary emphysema, pulmonary congestion and oedema, hydatidosis, pulmonary abscesses and atlectiasis were identified with prevalence of 33.33% (n=80), 31.25% (n=75), 12.08% (n=29), 6.67% (n=16), 2.08% (n=5) and 1.25% (n=3), respectively. The frequency and prevalence of pulmonary lesions identified in this study was summarized in Table 1. The lobular distribution of pneumonia, pulmonary emphysema, and pulmonary congestion and edema were significantly (p-value = 0.000) higher in the right cranial lobe than the other lobes of lungs. However, pulmonary abscess was significantly (p-value = 0.000) higher in the right middle and caudal lobes of the lungs compared to the other lung lobes. Hydatidosis, was also most frequently encountered in the right caudal lobe (p-value = 0.000). In addition, atelectasis was most commonly encountered in the caudal lobes of both right and left lungs with p-value < 0.321. The lobular distributions of pulmonary lesions were summarized in Table 2. Representative images of some pulmonary lesions are indicated in Figure 1. 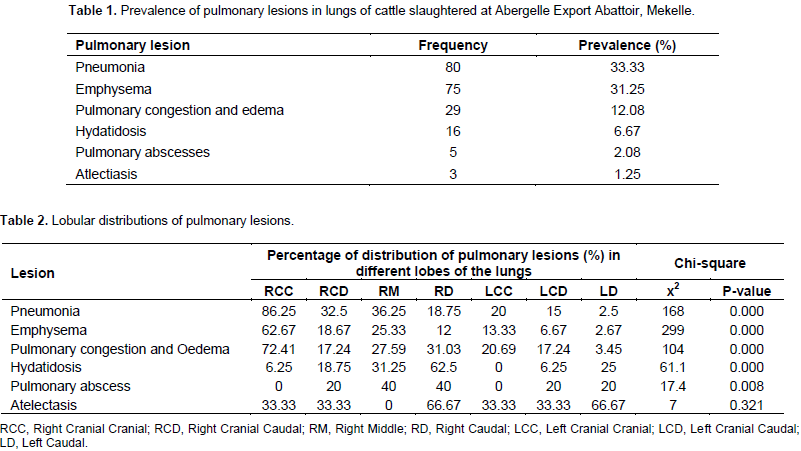 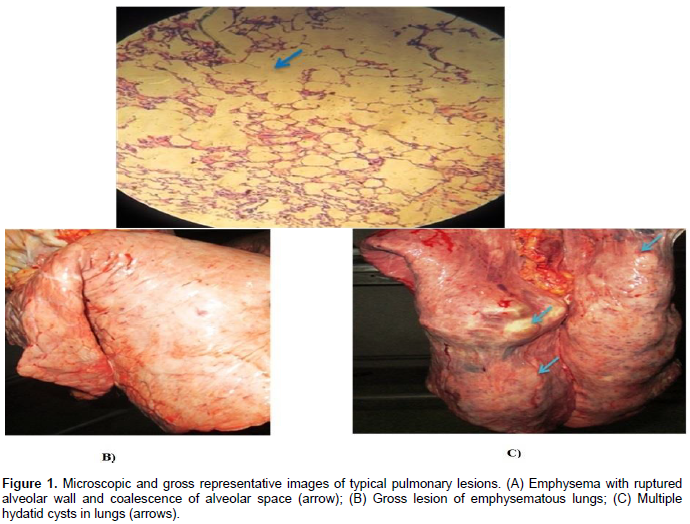 Out of 240 cattle lungs examined, 86.6 % had pulmonary lesions. This result was in agreement with the report of Gebrehiwot et al. (2015) and Abayneh (1999) who reported pulmonary lesions of cattle with prevalence of 86.2 and 83.87%, respectively. However, the result of this study was higher than the findings of Amene et al. (2012) and Ahmed et al. (2013) who reported pulmonary lesions with prevalence of 46.22 and 44.6%, respectively. These all results showed that respiratory diseases are highly prevalent in cattle production area. This high prevalence of pulmonary lesions could be due to the older age of the animals at slaughter with possibility of exposure to one of the agents which causes respiratory disease through time at least once. The overall prevalence of pneumonia in this study was 33.33%. This agree with the report of Ahmed et al. (2013) who reported pneumonia in cattle at a prevalence of 28.7% but higher than the results of Yifat (2011) and Amene et al. (2012) who reported 1.8 and 1.11% prevalence of pneumonia in cattle, respectively. The factors affecting are different in management systems, breed of animals, nutrition, climatic factors, and animal health extension services etc. Emphysema was found to be the second most prevalent lesion with a prevalence of 31.25%. This result coincides with the report of Gebrehiwot et al. (2015) where emphysema was observed on 36.3% of cattle and higher than the studies of Abayneh (1999) and Amene et al. (2012) who reported emphysema at prevalence of 16.53 and 6.77%, respectively. The emphysema could be due to excessive destruction of alveolar walls as a result of an imbalance between proteases produced by phagocytes and antiproteases produced in the lungs as a defense mechanism, secondary to obstruction of outflow of air or agonal at slaughter as indicated by Lopez (2012) and Dungworth (1993).
Emphysema was encountered more frequently on the right cranial lobes of the lung. Pulmonary oedema and congestion occurred at a prevalence of 12.08% and this was higher than the results of Amene et al. (2012) and Ahmed et al. (2013) who reported a prevalence of 2.33 and 6.5%, respectively. However, the result of this study was lower than the results of Rahman et al. (2003) and Gebrehiwot et al. (2015), who reported pulmonary oedema and congestion in cattle at a prevalence of 61.53 and 38.5%, respectively. Pulmonary oedema and congestion provides an ideal environment for the growth of pathogens of relatively low virulence. Hydatidosis was encountered in 6.67% of the examined cattle lungs and lower than the findings of Rahman et al. (2003), Gebrehiwot et al. (2015) and Amene et al. (2012) who reported prevalence of 25, 18.3 and 35.88%, respectively. This difference in the prevalence of hydatidosis may be due to variation of dogs and wild carnivore population. Hydatid cycts were distributed most frequently on the right caudal lobes of the lungs. This could be due to the larger size of the caudal lobes, which in effect get a greater volume of blood supply (Lopez, 2012). Pulmonary abscesses were encountered in 2.08% of the cases. This result was higher than the result of Amene et al. (2012) (0.11%) and lower than that of Gebrehiwot et al. (2015) (7.1%) and Ahmed et al. (2013) (9.4%).
Pulmonary abscess arise from either focal residues of severe, supportive lobar or bronchopneumonia or from septic emboli lodging in the pulmonary vascular bed. The most common sources of septic emboli include ruptured hepatic abscess in cattle, suppurative metritis, mastitis, septic arthritis, omphalophebitis in farm animal and bacterial endocarditis (right side) in all species (Lopez, 2012; Dungworth, 1993). Additionally the two less common causes of pulmonary abscess are aspiration of foreign bodies and direct traumatic penetration of the lungs (Lopez, 2012; Dungworth, 1993). The prevalence of atelectasis in this study was 1.25%. Atelectasis is common when collateral ventilation is less (Lopez, 2012). The cause of usual atelectasis is occlusion of the bronchus or bronchiole, which supplies it. This results most often from a plug of mucus or purulent exudates. The air contained at the time the bronchus is closed is absorbed in a short time as is regularly the case with entrapped gases. The airless alveoli then collapse under surrounding pressures (Lopez, 2012; Jone and Hunt, 1983). It also accompanies space occupying lesions in the thoracic cavity or on the lung parenchyma like neoplasia, granuloma, hydatid cyst etc and the accumulation of transudate and exudates when their volume is large (Lopez, 2012; Jone and Hunt, 1983; Dungworth, 1993). In all types of atelectasis the collapsed lung is prone to secondary infections (Lopez, 2012).

Out of the total 240 lungs of cattle examined, 86.6% were found with one or more pulmonary lesions, indicating pulmonary diseases as an important constraint of cattle production. The lesions encountered in this study will also play a role as a predisposing factors for respiratory disease outbreak under the influence of stress factors such as environmental change, extremes of climatic conditions, transportation and shortage of feeds and water or alone. Therefore, the prevailing environmental condition undue exposure to cold winds and rain, sudden change of climate coupled with the management stresses like over work might reverse these hidden inactive lesions and thereby contribute for the higher occurrence of respiratory diseases in cattle’s. Taking these facts into consideration the following recommendations are forwarded:
1. Further and subsequent study is recommended on a larger scale with specific data about the origin of animals slaughtered.
2. Awareness of the public about hydatidosis should be increased through public education and infected organs should be properly disposed.
3.Strong collaboration among governmental organization, nongovernmental organization, veterinarian (researchers) and livestock owners should be made in order to determine the impact of respiratory disease on cattle production and to design control and prevention strategies.

The author sincerely would like to appreciate Mekelle University College of Veterinary Medicine for provision of the laboratory and other facilities. They also extend their thanks to the Abergelle Export Abattoir for providing their facility to conduct the study.