It also contributes 15% of export earnings and 30% of agricultural employment (Behnke, 2010).  However, diseases have been the stumbling block against the full utilization of these resources for foreign currency through the export of live animals and skin (Solomon et al., 2003).

Currently, different causes of skin diseases in Ethiopia are accountable for considerable economic losses particularly to the skin export due to various defects, 65% of which occur in the pre- slaughter states directly related mostly to skin diseases causing often rejection because of poor quality (Behnke, 2010).

Ectoparasites which include mites, ticks, lice, fleas and flies parasitize a more extensive range of hosts (e.g. Ticks) while many of them are host specific (e.g. lice) (Singh et al., 2000; Aujla et al., 2000; Ranjan et al., 2014). Many ectoparasites are known to be vectors of pathogens which transmit different diseases to hosts while feeding, or occasionally it may also cause a significant defect to and skins of different animal populations (Jaswal et al., 2014; Salih et al., 2015; Mohammed et al., 2017).  This damaging of the skin is one of the annoying effects on the animals induced by the ectoparasites. The existence of various ectoparasites and skin diseases affecting small ruminants are frequently reported from different parts of Ethiopia. These are demodicosis, sarcoptic and psoroptic manges, ticks and lice infestations (Sertse and Wossene, 2007a; Mulugeta et al., 2010; Abay et al., 2017). The study area favors the development and propagation of ectoparasites which makes challenging to resist the annoying effect of these ectoparasites on the host and makes the control of ectoparasites difficult.

As shown in Figure 1, the study was conducted in Kola Tembien (K. Tembien), and Tanqua Abergelle (T. Abergelle) districts for  disease investigation and sample collection. The study districts are categorized as hot to warm sub-moist low lands sub-agro ecological zone of the region with an altitude of 1300-1500 m above sea level; the mean annual rainfall ranges from 400 to 600 mm, which is characterized by low, erratic and variable rainfall. The annual temperature ranges from 28 to 42°C (Figure 1). 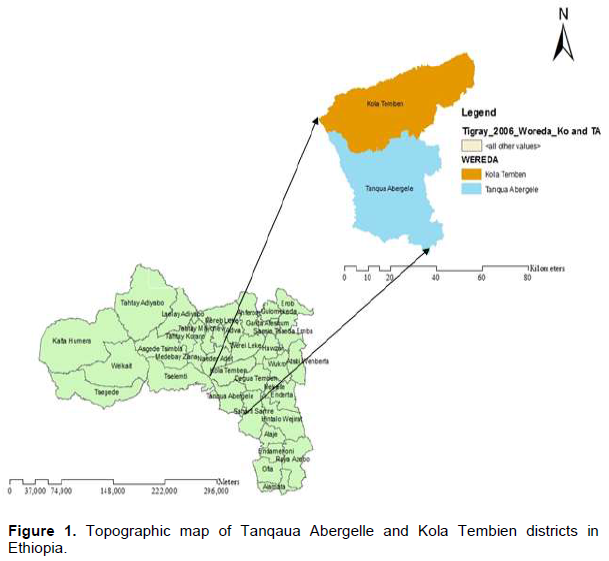 The study was conducted from September 2014 to June 2017. Indigenous sheep and goats owned by individual farmers and managed under extensive management system were included. The districts have an overall small ruminant population of 693, 628 goats and 151,734 sheep (Kola Tembien Bureau of Agricultural Office, 2019).

A cross-sectional study was conducted on identification of external parasites of small ruminants to their species level. The study of ectoparasites on sheep and goats involved districts, sheep, and goats as a sampling unit. About 237 live sheep and goats were examined for the presence of external parasites in a weekly visit. Sample size was calculated according to the formula given by Thrusfield (2008) for random sampling method. A previous prevalence of 26.25% studied by Abay et al. (2017) was used to determine the maximum sample size.

Age categorization into young (lamb/kid) and adult was performed as described by Gatenby et al. (1991) for sheep and by Steele et al. (1996) for goats. Accordingly, sheep and goats less than one year were categorized as young and the rest as adult. Sheep and goats found  infested  by  parasites  were  considered positive. Ectoparasites such as ticks, lice and fleas were collected by hand from their attachment site and put into container and preserved with 70 % alcohol (Urquhart et al., 1996). The collected parasites were taken to National Animal Health Diagnostic and Investigation Center (NAHDIC) and identified to species level by using taxonomical keys and entomological examination as per Keiser (1987).

Descriptive statistics were used to analyze the frequency of the identified species of external parasites. The effects of different epidemiological risk factors such as age, districts, and body condition on prevalence of ectoparasites in sheep and goats were analyzed by multivariate regression analysis at p value of 0.05.

Identification of species of external parasites

Eight different types of external parasites have been identified in NAHDIC by using taxonomical and entomological examination at species level. These are Amblyomma variegatum, Hyalloma truncatum, Rhipicephalus parvus, Rhipicephalus praetexatus, Rhipicephalus pulchellus, Rhipicephalus evertsi, Ctenocephalides felis felis, and Linognathus africanus, and their frequency is shown in Table 1. The highest prevalence was observed with A. variegatum infestation (35.4%) followed by R. parvus (22.8) in both species and districts.

The lowest prevalence was observed in R. evertsi infestation with an overall prevalence of 2.5% in both species and districts. 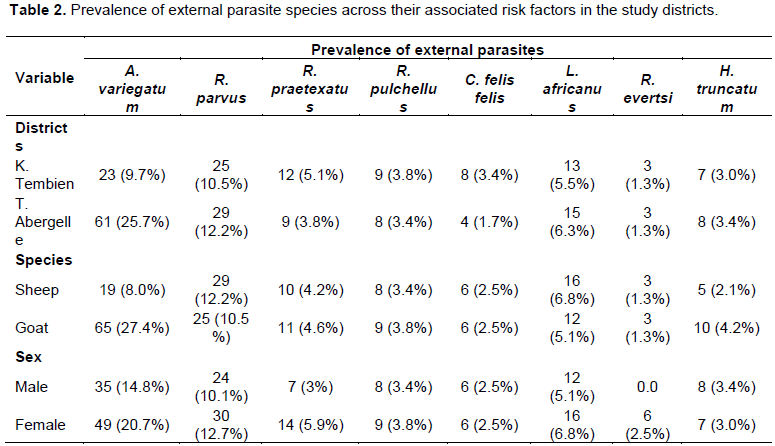 In our findings, eight species of external parasites were identified: A. variegatum, R. parvus, R. praetexatus, R. pulchellus, C. felis felis, L. africanus, R.evertsi, and H. trancarum with their prevalence of 35.4, 22.8, 8.9, 7.2, 5.1, 11.8, 2.5, and 6.5 percent, respectively. Tick infestations were the highest prevalence recorded in both species. Ahmed et al. (2017) found low prevalence of A. variegatum (24.5%), higher prevalence of R. pulchellus (34.1%), R. evertsi evertsi (22.1%), and H. truncatum (15.6%) in Diredawa districts compared to our findings. A small prevalence of A. variegatum (2.3%) was also reported by Seyoum et al. (2015) in Amhara Regional State, Sekela District. On the other hand there was a highest A. variegatum infestation in goat (27.4%) in our findings as compared to the study conducted by Mulugeta et al. (2010) which was 7.5%. An abundance of A. variegatum (66.15%) was reported by Jemere et al. (2011) in Wolmera District of Oromia, which is higher prevalence as compared to our findings. Such differences in prevalence may arise from differences in  agro-climate, control measures practiced, management, and health care of sheep and goats in the study areas. Sheep and goat owners also noted seasonality in occurrence of ticks, which is related to the beginning of annual rain. Higher environmental temperature, humidity and prolonged sunlight favor the survival and reproduction of ticks in lowland areas (Pangui, 1994).

In our study, the overall prevalence of flea infestation (C. felis felis) in small ruminants were 5.1% which is smaller than the findings of Sertse and Wossene (2007a) who reported  a prevalence of 8.1% in eastern part of Amhara regional state. The previous C. felis infestation (11.1%) in Tigray region reported by Mulugeta et al. (2010) was higher than our findings. In our study area, the prevalence of C. felis felis in sheep and goat was 2.5% which was higher in sheep (0.2%) and lower in goat (8.1%) as compared to a report of Sertse and Wossene (2007b) in Eastern part of Amhara. According to Bates (2012) flea infestation is usually associated with close contact of animals with infested animals and also the same host.

Lice infestations with Linognathus species were the most prevalent external parasite recorded in sheep and goats in the study districts. According to Sertse (2004), higher prevalence of Linognatus species (28.3%) was found in Amhara regional state as compared to our findings.  According to Mulugeta et al. (2010) the prevalence of L. africanus in sheep in three districts of Tigray region was 11.5%, which is higher than our findings (6.8%). Louse infestation may show some other underlying problems such as malnutrition and chronic diseases. The irritation caused by even a modest population of lice leads to scratching and rubbing, causing damage to the skin and severe infestation with Linognathus spp. may cause anemia (Sertse and Wossene, 2007b).

Our study revealed that eight species of external parasites have been found with a higher rate of infestation. Favorable environmental conditions, poor level of farmers’ awareness and weak animal health extension services are believed to be the main factors for the wide distribution of external parasites in the study districts.

The author appreciate Tigray Agricultural Research Institute for financial support to conduct this research and to National Animal Health Diagnostic and Investigation Center (NAHDIC) (Ethiopia) for conducting the laboratory analysis.