Diversity of cellulase- and xylanase-producing filamentous fungi from termite mounds 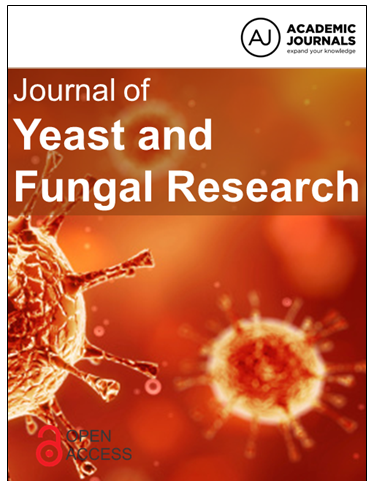 Cellulases and xylanases are enzymes of industrial significance, particularly in the pulp, paper, textile, and animal feed industries. Moreover, their utilization in the food industry, among them, bakery, brewery, winery and fruit and vegetable juice production, cannot be underestimated. One of the potential sources of enzymes is the filamentous fungi, and hence bio-prospecting of this specific group of microorganisms with the highest levels of cellulase and xylanase secretions is being continuously undertaken. The specific aim of this study was to isolate and characterize cellulase- and xylanase-producing filamentous fungi from termite mounds. Termite mounds have long been established as very good sources of filamentous fungi with the ability to secrete high levels of lignocellulolytic enzymes, and hence an ideal target for the bio-prospecting of cellulases and xylanases. In this study, various groups of filamentous fungi were isolated through enrichment and repeated sub-culturing. This was followed by screening using the Congo red plate-based assay. Cellulase and xylanase activities during the solid-state fermentation of wheat bran were detected and analyzed through spectrophotometry via the 3,5-dinitrosalicylic acid detection system for reducing sugars. The obtained fungal isolates were then finally characterized through zymography, reaction kinetics and morphological studies. Overall, a total of eight different groups of fungi, capable of decomposing cellulose and hemicellulose, were isolated, and their tentative identities established as Fusarium, Didymostible, Penicillium, Phytophthora, Oedocephalum, Aspergillus, Monosporascus and Acremonium. Taken together, findings of this study conceivably showed that termite mounds are a good source of filamentous fungi that in turn are also a good source of cellulases and xylanases that arguably, can be recommended for use in industrial and commercial settings.

Termites are soil insects that efficiently decompose lignocellulosic material  with  the  aid  of  their  associated microbial symbionts (Ohkuma, 2003). Termites live in termite mounds, which they build themselves,  and  these
mounds are very predominant in Africa and Asia due to the warmness nature of these two continental regions (Makonde et al., 2015). Naturally, termite mounds are of two kinds; type 1 and type 2. Type 1 mound is generally small and susceptible to erosion while type 2 mound is large, epigeic and cemented (Sharma and Sumbali, 2013)as shown in Figure 1. Within the mound, termites formulate nests of diverse forms that are essentially covered with various plant and termite material, termed combs. In these combs, various microorganisms such as fungi, bacteria and yeasts are also found due to the ubiquitous nature of microorganisms and availability of food, and of which most live synergistically with the resident termites. If a comb is predominantly made up of fungi, it is termed a fungal comb whilst those of bacteria and yeast are also termed bacterial and yeast combs respectively. 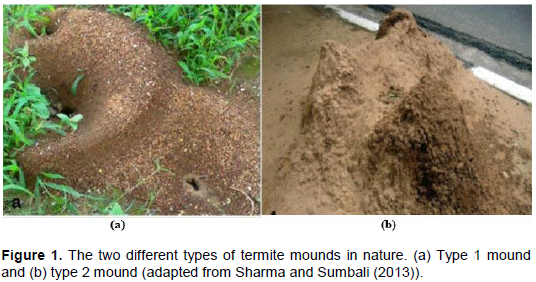 Termites of the sub-family Macrotermitinae, also known as fungus-growing termites, cultivate symbiotic fungi of the genus Termitomyces on fungal combs, which are synergistically maintained in nests of the termite mounds (Hyodo et al., 2003; Taprab et al., 2002). In nature, termites solely depend on plant litter as their main source of food, however, these insects naturally lack the lignocellulolytic enzymes responsible for the breakdown of lignin and cellulose (Ni and Tokuda, 2013). Hence, to efficiently utilize lignocellulosic material, termites co-operate with symbiotic fungi in a sophisticated but well-coordinated manner. In this relationship, the symbiotic fungi have four major functional significances to the termites. Firstly, to provide ligninolytic enzymes that avail cellulose; secondly, to  provide  cellulolytic  enzymes  that avail hemicellulose; thirdly, to provide hemicellulases, which synergistically work with the endogenous termite enzymes to breakdown hemicellulose into various simple and soluble sugars; and lastly, to act as sole source of nitrogen for the termites (Hyodo et al., 2003; Ohkuma, 2003).
Symbiotic fungi avail cellulose and hemicellulose to both termites and other associated soil microbes. Due to the ubiquitous nature of microbes, there is a high likelihood of also finding other lignocellulolytic enzyme-producing microorganisms (bacteria, yeasts and fungi) in termite nests, since substrates are readily available. Among the termite nest microorganisms, fungi are industrially recognized as important producers of lignocellulolytic enzymes because of their ability to excrete large quantities of enzymes extracellularly (Adesina and Onilude, 2013; Polizeli et al., 2005), thus making the general extraction and purification process of the enzymes much easier and cheaper.
Lignocellulolytic enzymes constitute a very large group of extracellular proteins mainly, cellulases, hemicellulases, pectinases and ligninases (Mtui, 2012). Of these, cellulases and xylanases are of significant industrial value and relevance. These two groups of enzymes have numerous applications and massive biotechnological potentials for the various industrial sectors, including chemical, food, brewery and wine, animal feed, textile and laundry, pulp and paper and agriculture (Bhat, 2000; Kuhad et al., 2011; Polizeli et al., 2005; Subramaniyan and Prema, 2002). In addition to these applications, cellulases and xylanases are key enzymes that can be effectively used to solve  challenges associated with energy inadequacy and environmental pollution (Favaro et al., 2013). These two groups of enzymes are currently being used significantly in the commercial bio-conversion of lignocellulosic biomass to bio-ethanol (Limayem and Ricke, 2012). It is therefore on the basis of this industrial demand and significance that the bio-prospecting of diverse cellulases and xylanases, particularly in termite nests, has become a necessity. In this study were report the isolation, screening and characterization of cellulase- and xylanase-producing filamentous fungi from termite mounds for possible recommendation in industrial and commercial systems.