The purpose of this study was to investigate the production of laccase from a white rot fungi isolated from the Amazon forest for oxidation of Remazol Brilliant Blue-R (RBB-R). Initially, a small screening was carried out aiming to find laccase producers. The next step was to investigate, using factorial design and Response Surface Methodology (RSM), the influence of theã€€content of glucose, peptone and CuSO4 in the production of laccase by the selected fungi. Subsequently, the ability of the produced laccases to oxidize RBB-R was investigated. As a result, Agaricomycete (UFAM1) presented the highest laccase production (117.2 U/L) in the screening assay. Using the factorial design and surface responses was possible to determine the best conditions for laccase production by Agaricomycete (UFAM1). Then, the excellent medium to produce laccase was composed of glucose- 20 g/L, peptone- 10 g/L and CuSO4- 500 µM. However, in the RBBR decolourization assays, the filtered of the culture promoted a decolourization activity of 2 U/L. This is the first research that demonstrates a fungal strain from the Amazon forest able to produce high levels of laccase, without demonstrating metabolic repression to high contents of carbon and nitrogen sources and that the produced laccases are able to cause oxidative degradation of RBB-R, an important model of recalcitrant compound.
Key words: Laccase, Isolament, Remazol Brilliant Blue-R (RBB-R).

The white rot fungi (WRF) is a microbial group capable of degrading lignin faster and more extensively than any other group of microorganisms (Kirk and Farrell, 1987). The fungi belonging to this group produce a set of enzymes that performs an oxidative attack on the lignified plant   tissues,   so   it   results in lignin degradation. This characteristic allow these organisms to reach the structural carbohydrates inside the fibres (Hatakka, 2001). A large number of enzymes encountered in environment secreted by WRF are involved with lignin degradation such as laccases, manganese peroxidases (MnPs and lignin peroxidises (LiPs) (Hatakka,  1994, 2001; Fujii et al., 2013). Also, lignin-degrading enzyme activitieshas been related in forest environment as Fujii (2014) reported.
Lignin is a high molecular mass compound with a random structure and its degradation is only possible because of the unspecific trait of these enzymes (Kirk and Farrell, 1987). Even though they are not specific, these enzymes are able also to oxidize a wide range of toxic and recalcitrant compounds. This compounds make them suitable for several industrial and biotechnological applications such as: baking (Selinheimo et al., 2006), biopulping (Kuhad et al., 1997; Tamminen et al., 2003), effluent treatment (Jaouani et al., 2005; D’Annibale et al., 2004), degradation of xenobiotics (Zavarzina et al., 2004), organic synthesis (Karamyshev et al., 2003) and a number of other processes (Couto et al., 2006; Nüske et al., 2002).
An ample attention has also been paid to the decolourization of industrial dyes by the ligninolytic enzymes of the WRF. Studies have shown that the WRF ligninolytic enzymes have the capacity to decolorize a variety of dyes belonging to different chemical classes, such as azo, anthraquinone derivative, heterocyclic and triphenylmethane (Boer et al., 2004; Wong and Yu, 1999; Zeng et al., 2011). Remazol Brilliant Blue R (RBBR) is an anthracene derivative dye and an important organic pollutant from which a variety of polymeric dyes are produced and it has been widely used as a model compound in decolourization studies (Murugesan et al., 2009; Machado et al., 2006; Boer et al., 2004; Zenget al., 2011; Eichlerová et al., 2006).
Thus, in this present study, a small screening was carried out of laccase producers. Furthermore, the technique to evaluate the process, that is, the Response Surface Methodology (RMS), was used in order to define suitable culture media for Agaricomycete (UFAM1) produce this enzyme and decolorize RBB-R. This technique evaluates the performance of the variable production to optimize the process based in multivariate statistical study (Montgomery, 2005).

White rot fungi isolation
White rot fungi from Agaricomycete group were isolated from decayed wood with sights or white rot degradation at the campus of the Federal University of Amazonas, Brazil. Pieces of the basidioma were surface sterilized using 70% alcohol under aseptic conditions for 30 s, then washed with sterilized water and placed in petri dishes containing Potato Dextrose Agar (PDA, pH 5.5) culture media. After this process, the isolated fungi were maintained through periodic transfer onto PDA plates at 25°C.
Screening for laccase production
After the fungi growth, agar disks (8 mm) was taken from the active borders of PDA culture and transferred into Erlenmeyers flasks containing   50 mL  of  liquid  PDA  (pH 5.5).   These   strains   were incubated at 25°C in the dark without shaking. After 14 days of cultivation, the liquid cultures were filtered using Millipore membranes (0.45 µm) and the filtrates were submitted to enzyme assays. The isolates that demonstrated the highest laccase production were selected for the optimization assays.
Optimization assays
The influence of glucose, peptone and Cu2+ content in the production of laccase was investigated using 23 factorial design with a star arrangement (axial points). This process necessarily uses copper because laccase has catalytic sites to Cu, so it plays as a cofactor to start its activity. Thus, copper can influence the performance of laccase due to it was used in this assay. Therefore, 14 experiments were carried out and an experiment with four repetitions in the central point. A statistical model was determined, statistically evaluated and the responses were studied by RSM (Barros Neto et al., 1995).
The culture media defined in Table 1 were prepared (pH 5.5) and sterilized in autoclave for 15 min at 121°C. Agar disks taken from the active borders of 10 day PDA cultures were transferred into 125 mL Erlenmeyers flasks containing 50 mL media (one disk per flask). The flasks were incubated in the dark at 25°C. After 20 days, the liquid media were filtered using Millipore membranes (0.45 µm) and the filtrates were submitted to enzyme assays.

A fungi screening in submerged fermentation was carried out in order to find laccase producers. After 14 days of cultivation, three of the eight isolates presented laccase activity. The isolates Agaricomycete UFAM2, UFAM22, and UFAM1 produced 5.1, 7.3, and 117.2 U/L of laccase, respectively. The isolate Agaricomycete UFAM1 was selected for the optimization assay due to its high production (117.2) U/L).
In order to determine the influence of [Glucose] (g/L), [Peptone] (g/L), and [Cu2+] (µM) in the production of Laccase by the isolate UFAM 1, a 23 design of experiment supplemented with axial points (star) with four repetitions in the central point was carried out. It is possible to notice (Table 2) that the results of the design of experiments ranged from 12 to 551 UI/L, demonstrating the importance of the factors investigated. 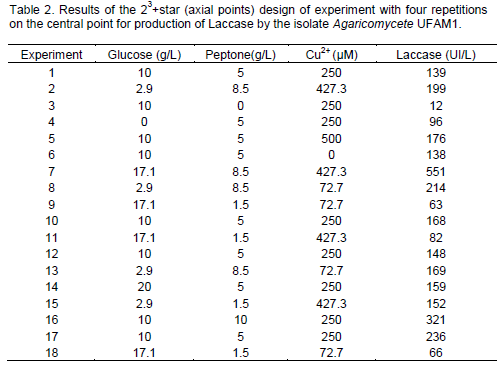 The main effects and their respective interactions was calculated from the data of Table 2 are presented in Table 3. The standard errors and the estimated effects were then calculated, according to Barros et al. (1995) only consider significant (for 95% confidence) the effects with values higher than tvxμ. The tv value is t test for v freedom degree. In this study the t test, for 2 freedom degree (95% confidence) was 3.18. 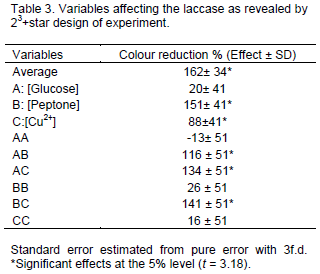 The linear effects of [Peptone], [Cu2+] and the interactions of [Glucose]*[Peptone], [Glucose]*[Cu2+] and [Peptone]*[Cu2+] were significant for the laccase production and a model (regression equation) was fitted with the significant effects: Laccase (UI/L) = 379-24*Gluclose-30*Peptone-0.85*CuSO4 + 2.3*Glucose*Peptone + 0.05*Glucose*CuSO4 + 0.11*Peptone*CuSO4. Glucose was included in the model because its interactions presented statistical significance.
The ANOVA test was used to evaluate the regression and the  lack-of-fit  of  that  model  (Barros  et  al.,  1995) (Table 4). The P-value for all the considered factors was near or inferior to 0.05, showing that these effects have significant regression. The significant regression (>80%), absence of lack of fit and the high variance percentage explained demonstrated that the model presented could be used to produce the surface response presented in Figure 1. 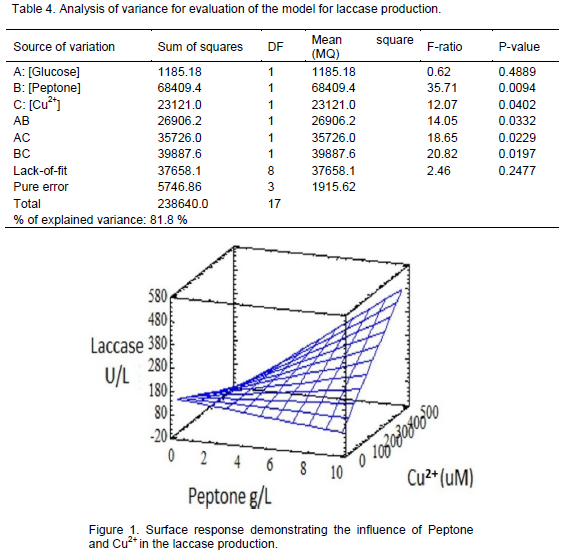 Using these surfaces responses (Figure 1), it was possible to determine that the best conditions for laccase production (736 U/L) were glucose- 20 g/L, peptone- 10 g/L and CuSO4- 500 µM. Furthermore, in the RBBR decolourization assays, the filtered of the culture from experiment 7 (Table 2) promoted a decolourization activity of 2 UI/L.

Laccases have economic importance and have been used in the pharmaceutical and food industries and for effluent/residues treatment. In the present work,  during the screening of laccase producers, the strain Agaricomycete UFAM1 produced highest levels of the enzyme and it was selected for the optimization assays.
In the optimization assays, the effects of the factors [Peptone], [Cu2+] and the interactions of [Glucose]*[Peptone], [Glucose]*[Cu2+] and [Peptone]*[Cu2+] were significant for laccase production. This result demonstrated that UFAM1 is not only a good laccase producer but it was also not susceptive to metabolic repression by high concentrations of glucose or peptone. This is a very different response from previous works described in the literature. According to Kirk and Farrell (1987), the ligninolytic enzymes are produced by Phanerochaete chrysporium during the secondary metabolism under conditions of limited nitrogen. The results observed in this study are consistent with these previous statements. On the other hand, Machado et al. (2006) reported that in Pleurotus ostreatus, in a high concentration of nitrogen medium (glutamate as N source) slightly stimulated depolymerisation of lignin compared to the N-limited medium. This information demonstrates that more studies are necessary in order to relate the lignin metabolism, ligninolytic enzymes production and nitrogen sources.
The data of the present work demonstrated that CuSO4 content improves the laccase production. This is possible because copper plays as a laccase cofactor, so it can improve the performance of laccase activity. This response has been demonstrated in the experiments of submerged fermentation; however, even in these studies a copper content higher than 1000 µM or the CuSO4 in media with pH lower than 4 decreased the fungal growth and enzyme production.
Thus, the goals achieved in this present study are very interesting because a fungal belonging to Agaricomycetes class has been known to produce high levels of laccase without presenting metabolic repression from high contents of carbon and nitrogen sources; moreover, the produced laccases are able to cause oxidative degradation of RBB-R, an important model of recalcitrant compound.