A galactose-specific lectin was purified from the skin mucus of African catfish (Clarias gariepinus) and the physicochemical properties determined. Phosphate buffered saline extract of the skin mucus of African catfish specifically agglutinated erythrocytes of rabbit and human blood group B, but did not agglutinate bat, rat, hen and human blood A and O erythrocytes. The haemagglutinating activity of the lectin was completely inhibited by lactose while galactose and melibiose inhibited the activity to some extent and was calcium-independent. The purified lectin has a native and subunit molecular weight of 63, 000 and 20, 000 Daltons, respectively suggesting a homotrimeric structure for the protein. The protein contained 126 amino acid residues per subunit. This was characterized by large amount of polar amino acids that constituted about 60% of the total amino acids. The lectin showed maximum activity over the pH range 6 – 9 and was heat stable up to 50°C. Ethylenediaminetetraacetic acid (EDTA) had no inhibitory effect on its haemagglutinating activity. Periodic acid–Schiff (PAS) staining showed that the lectin was not a glycoprotein. Chemical modifications of serine and arginine residues of the protein did not affect its haemagglutination activity while modifications of cysteine, tryptophan and histidine residues led to total loss of its activity. The study concluded that African catfish skin mucus lectin exhibited similar physicochemical properties with lectins from other fish skin mucus.
Key words: African catfish, Lectin, haemagglutination, skin mucus, galactose-specific, Clarias gariepinus

Lectins are heterogeneous class of proteins that bind specifically and reversibly to carbohydrates (Lis and Sharon, 1998). They are widely distributed in nature and can be found in almost all living organisms including bacteria, fungi, plants, invertebrates and vertebrates and may be either soluble or membrane-bound (Lis and Sharon,  1986;  Drickamer, 1995; Khan and Khan, 2011). However, majority of the studies on lectin have been carried out on plant lectins, particularly on the seeds of legume species (Sharon and Lis, 1990; Chrispeels and Raikhel, 1991). They have attracted immense interest because of the various biological activities such as cell agglutination, antiviral, antitumor, antiproliferative, antifungal and immunomodulatory (Wang et al., 1996; Fang et al., 2010; Melo et al., 2011; Souza et al., 2011). They have become important class of proteins with a wide variety of biochemical uses which include their role in bioseparation and reversible immobilization.
Since the discovery of animal lectins, most animal lectins studied occur inside the body like in the plasma, cell cytoplasm or at the cell surface (Tasumi et al., 2004). However, some lectins outside the body have also been studied especially in fish. A large numbers of researchers have intensively purified lectins from skin mucus of various fish species (Alexander and Ingram, 1992; Suzuki et al., 2003; Tsutsui et al., 2007). Skin mucus lectins of several species of fish have been shown to bind microorganisms (Tasumi et al., 2002; 2004: Tsutsui et al., 2006, 2007). These findings suggest that lectins contribute to the self-defense mechanism against these microorganisms and also support the report that fish skin secretions contain immunoglogulins as well as various innate-defense factors such as complements, C-reactive protein, lysozyme, hemolysin, anti-microbial peptides and lectins (Suzuki et al., 2003; Argayosa et al., 2011; Benhamed et al., 2014).
African catfish (Clarias gariepinus) is essentially an omnivorous bottom feeder; however they are known to be very tolerant of extreme environmental conditions. To fight off pathogenic microorganisms, the epidermis and its secretion, the mucus acts as a barrier between the fish and the environment (Benhamed et al., 2014). The composition and rate of mucus secretion has been observed to change in response to microbial exposure or to environmental perturbations such as hyperosmolarity and acidity (Ellis, 2001; Subramanian et al., 2008). Consequently, study of the physical and biological properties of the lectin in the skin mucus of African catfish (C. gariepinus) would give insight to the roles of this molecule in host defense and in the known adaptability of the catfishes to diverse environmental conditions. Hence, this study reports the purification of a galactose-specific lectin from the skin mucus of the African catfish C. gariepinus and physicochemical properties of this lectin. 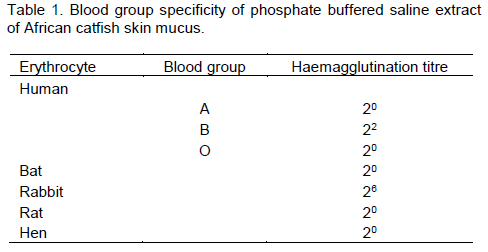 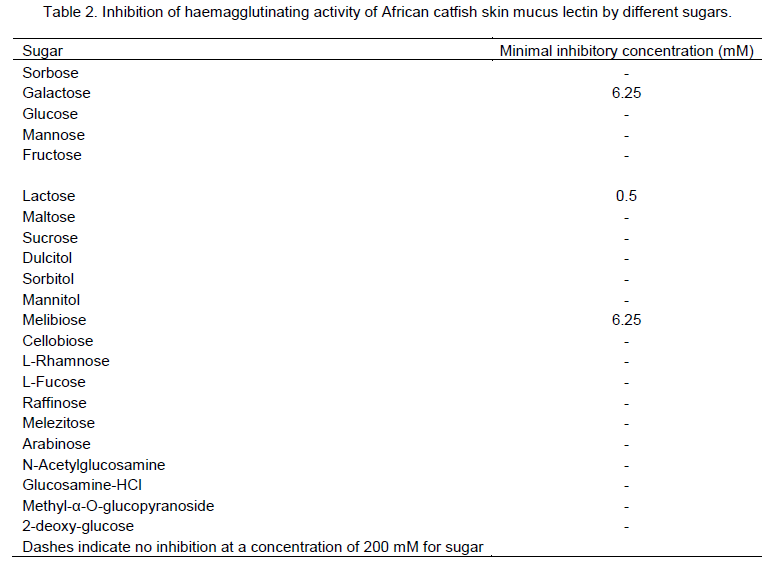 The lectin was isolated and purified to homogeneity from the skin mucus by a two step purification procedure comprising of gel filtration on Sephadex G-100 and affinity chromatography on Lactose-Sepharose 4B and the bioactivity of the lectin was measured by haemagglutination during each purification step. The level of purification was monitored by increase in its specific activity (Table 3). A typical elution profile on gel filtration is as shown in Figure 1. Two protein peaks were obtained, only the first peak exhibited haemagglutinating activity. The lectin active peak was further purified by affinity chromatography on Lactose-Sepharose 4B column (Figure 2). The lectin activity resided in the fraction adsorbed in the immobilized sugar, which was eluted with 0.2 M lactose in 10 mM phosphate buffer pH 7.2. The final preparation gave a distinct single protein band in SDS-PAGE. 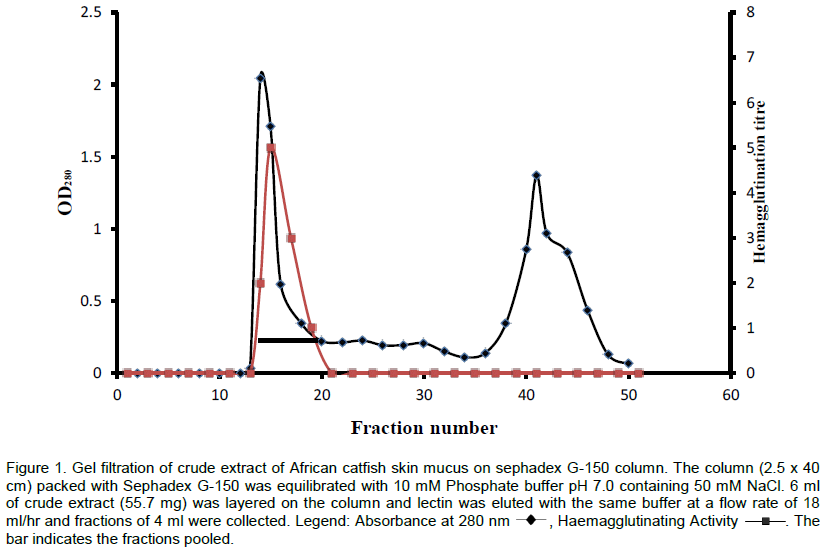 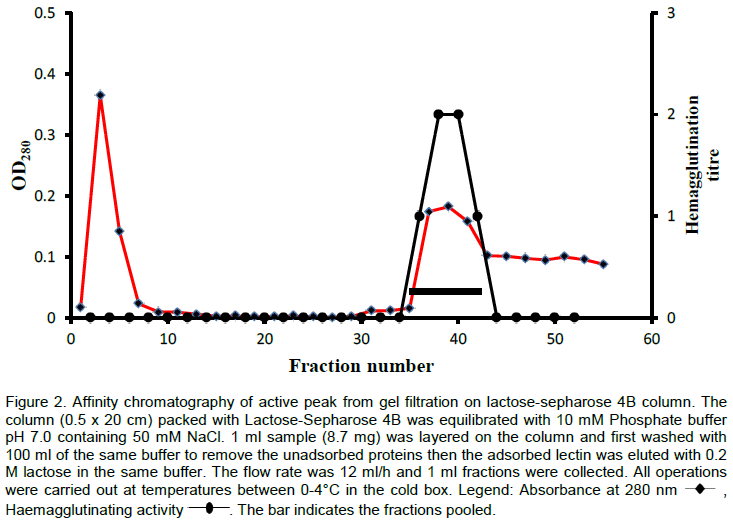 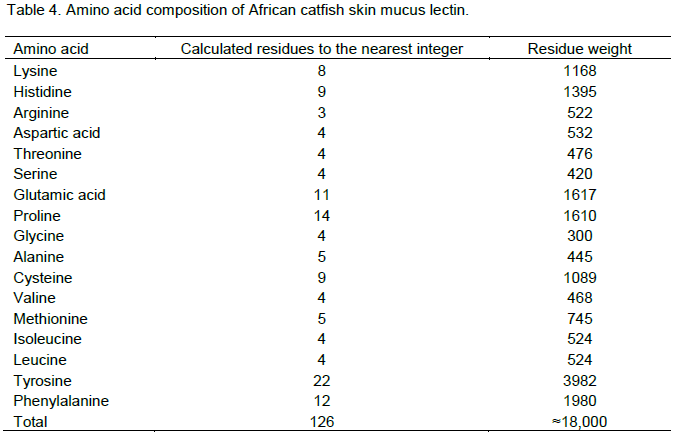 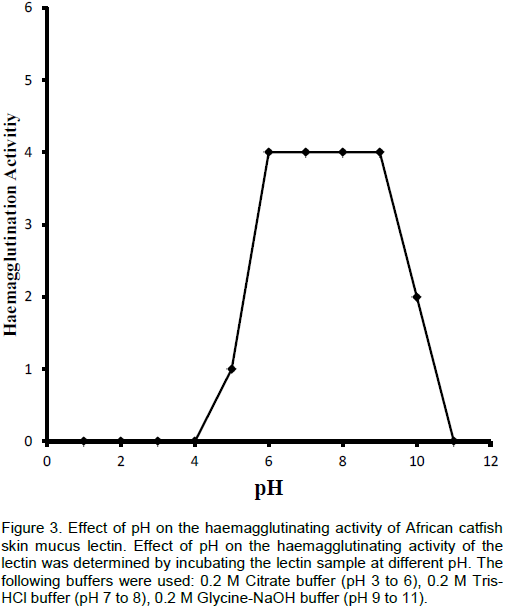 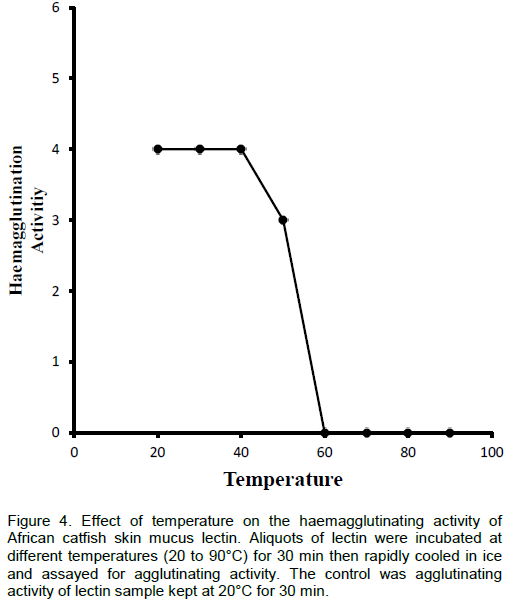 The lectin from skin mucus of African catfish showed similar biological and molecular properties with the skin mucus lectins from several species of fish. However, some minor differences still exist which give each lectin unique characteristic. Further line of research should involved deducing the structure of this lectin for proper classification and also investigation of the physiological function of this lectin to clarify its involvement in the mucosal defense mechanism of African catfish.